I should’ve been out killing griffins, goblins, and other gribblies, but for much of my Witcher 3 save file, it was Gwent that had its claws in me. It says something about me, I guess, that I preferred to stay in the pub and play cards than go out into the dangerous world outside, but it’s clear that CD Projekt RED hit on something fairly special with its throwaway minigame.

Now a proper game in its own right, Gwent — or Gwent: The Witcher Card Game, to give it its full and very explanatory title — has been in open beta since May this year. Developer CD Projekt RED has offered real money microtransactions for the same length of time, allowing players to build their decks as they’ve tweaked and changed the game with a steady stream of patches and updates.

The core of the game remains the same, though. Players have three rounds to add cards to three ranks, each representing elements of a pitched battle: frontline troops (represented by a sword), ranged soldiers (crossbow), and artillery (trebuchet). Each card has a value attached to it, and the player with the highest value on the field when both players have passed is the winner.

Certain cards can remove value from their opponent’s ranks, but by default, standard cards serve only to add points to your side. That means that Gwent can feel more passive than big-name peer Hearthstone, but the decisions on when to pass a round — how to bait an opponent into wasting their best cards, when to bluff, and when to fold — make CD Projekt RED’s game an intriguing and tactical entry in an increasingly crowded market. 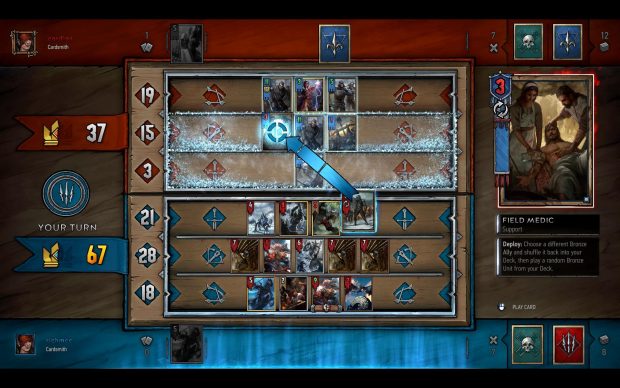 The developer hasn’t been afraid to make big changes to its card ecosystem in the months since open beta started, either. Coming from the Witcher 3’s version of the game, the biggest shift for me was how standalone Gwent handles the Decoy card. Previously, a Decoy allowed players to return a card to their hand for use on future turns — or even future rounds. Now Decoy-ed cards need to be played again immediately, as part of the same action. The shift means that the card serves not as the bait-and-switch it was before, but as a reliable buff and a chance to re-trigger a valuable deployment effect.

It feels like a good move by CD Projekt RED; it certainly makes the first turn more enjoyable. My staple approach in OG Gwent would be to throw down a medium-power card in round one, then immediately yank it back into my hand, luring my opponent into wasting something semi-reasonable of their own. It became an auto-play move, but I found out quickly that this no-thought bit of bastardry doesn’t fly any more. Now I use my Decoys on my Harpies, ensuring they get to lay a second clutch of eggs for my tag team of hissing Ekimmara vampires to feast on. That in turn boosts the bloodsuckers beyond their usual power, and makes the decision to play a Decoy one that involves more thought than it ever did before.

I’d like to pretend I worked out this power combo by myself, but I’d be lying. I picked it up from a handy list I found online, written by a helpful type who explained which cards I should craft first, how I should be using them, and where I could go next with the deck. I went looking for a list like this because I’m lazy, sure, but also because Gwent doesn’t do a good job yet in guiding new players on where to go. After completing the short tutorial and the 30-plus challenge missions on offer, I still felt like I didn’t have a proper grip on what exactly the various factions were good at. 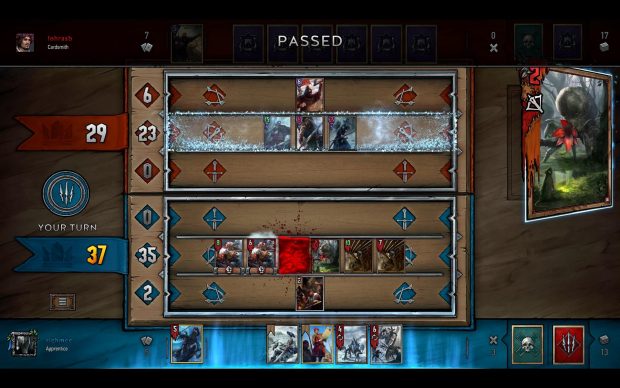 Gwent’s promised story mode — recently delayed to next year with the game’s full launch — may go some way to assuage these problems. But for now, new players are turfed out on their own and forced to either sit and read hundreds of card descriptions, somehow keeping track of their potential interactions like a card-counting computer, or to steal ideas and lists from much better players.

My anonymous internetter had done me right, though: at lower ranks, I was able to consistently win using the Monster deck I’d borrowed, facing up against opposing decks that didn’t have the coherency or gameplan that I had (shamelessly stolen).

What they did have was variety. I faced up against a few other Monster users during my matches both casual and competitive, but there’s a healthy division of labour in the Gwent community, with very different decks on display from all the other factions. But that brings its own problems for new players: because the factions do play so differently, it takes a good long while to get the deck you want.

Cards come in kegs, awarded for levelling up, gaining new ranks in competitive mode, and completing challenges. Kegs are unlockable for free, thankfully, but it’s still a drip-feed of a system, with each keg only paying out a maximum of five cards and the rate of acquisition slowing down sharpish once you start to hit the higher levels. There’s no guarantee you’ll get the right cards for your favoured faction, either. My planned "budget" deck revolved around weather cards and Monsters that took advantage of their bonuses, but weather-focused Monster deck, but I was a few thousand scraps — earned over several tens of hours of game time — away from creating my ideal deck.

There wasn't another clear path I could've gone down, either. The five Starter decks feel a touch too aimless to really build around, and the potential combos I could identify were still several card crafting sessions away. Even to build my cheapo Monster deck, I had to burn some pretty good cards, turning them into scraps that could then be reforged into other units. With no way to test the cards ahead of time, I had to place all my trust in the guide, destroying cards from my Nilfgaard, Scoia’tel, Skellige, and Northern Realms decks in the hope that my Monsters would benefit. 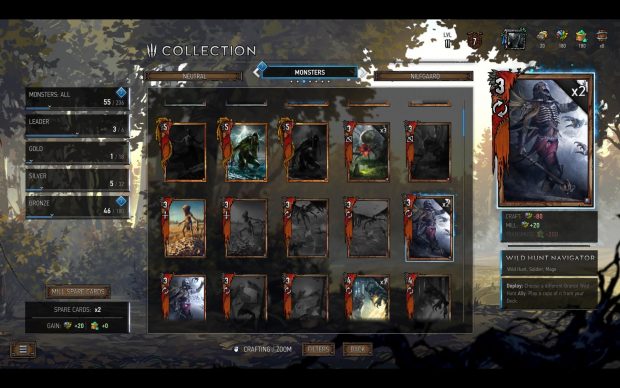 To that end, while Gwent is a free-to-play game, the one-off $4.99 Starter Set feels like a must-buy. It offers 10 card-carrying kegs for a lower price than you’d normally pay, as well as a guaranteed Legendary gold card. I didn’t get any of the cards I actually needed as part of the package, but it did provide enough junk for me to (eventually) craft the cards I’d need for a solid early deck.

Those cards are split into bronze, silver, and gold tiers, with the cost in scraps of crafting each one rising per tier. Getting gold cards is the hardest — there’s no way to buy specific cards, nor the scraps needed to craft them, with real money or in-game currency — but that’s not too much of a problem when gold cards aren’t always that great. In August of this year, CD Projekt RED updated the game so that bronze and silver cards — previously incapable of hurting big bad golds — could now damage them and shift them around the board.

Gwent decks can only have four golds in amongst a minimum of 25 cards, but the so-called “gold immunity” update still opened up more combo potential, and made the game feel less static. My beginner deck, for example, builds on the idea that I’ll be able to freeze an enemy rank with a Biting Frost card, before using a Jotunn giant to shuffle opposition units into the danger zone I’ve just created. Previously, gold cards — characters like Witcher 3 stars Triss Merigold and Eskel — would’ve been impervious to my machinations. Now they die just the same as their bronze and silver deckmates.

It makes the game feel quicker, but the loss of gold immunity does make these named characters — many of whom I know pretty well after 80 hours of RPG-ing alongside them — feel a little less impressive. Geralt, for example, is the White Wolf of Rivia, the Butcher of Blaviken, and a superhuman mega-mutant who takes down building-sized beasts for fun, but he’s cast here as one of Gwent’s most boring cards: a simple warrior who comes with a hefty power rating but is often tossed out by many players as chaff in round one. 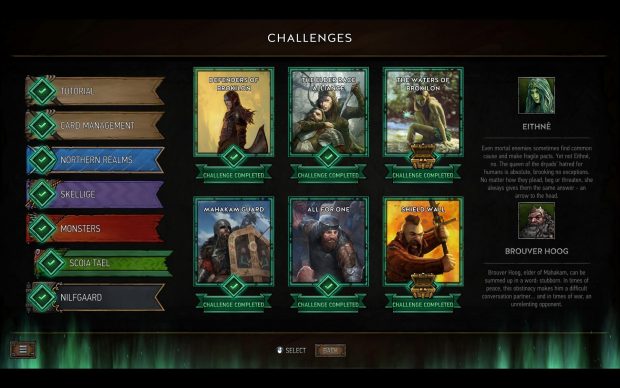 That’s assuming you even know who these people, monsters, and machines even are. Witcher 3 players should recognise a good number of the humans, elves, and dwarves that make up the cast of silver and gold cards, but you’ll need to have paid special attention to know your Vrans from your Chorts, and your Northern Realms soldiers from your Nilgaard men. It only took me a few games to get used to each faction’s starter decks, but without Hearthstone’s cheery colourfulness, and with an army of army men to wade through in a number of the decks on offer, it’s not immediately obvious what cards can actually do.

The card art is pretty, though, and the cosmetic system doesn’t feel like it intrudes onto the game itself. Gwent cards can be “transmuted” using Meteorite Powder, animating their card art in the process. There’s no in-game benefit to transmuting cards, beyond the show-off potential of having your favourite cards jiggle around in your enemy’s face, meaning that players can totally ignore a real-money part of the game if they so wish.

They will need to invest either money or serious time into the game if they want to get a decent deck, though. Gwent’s starter decks hint at a tense and tactical game, but players need a touch more guidance on where to go next before many will be willing to commit the time to get the cards they need.