I'm a big fan of elaborate castle/tower builds in Minecraft. People manage to tease some spectacularly baroque excess from just a meagre few varieties of textured cube, and ten years after I first came across the game, I'm still seeing entirely new ideas every time I have a poke around for inspiration. Reddit user and YouTuber Kyle Blane, whose work I encountered today, is a bit of a wizard with the grey stuff, but his latest build had a surprising standout feature. 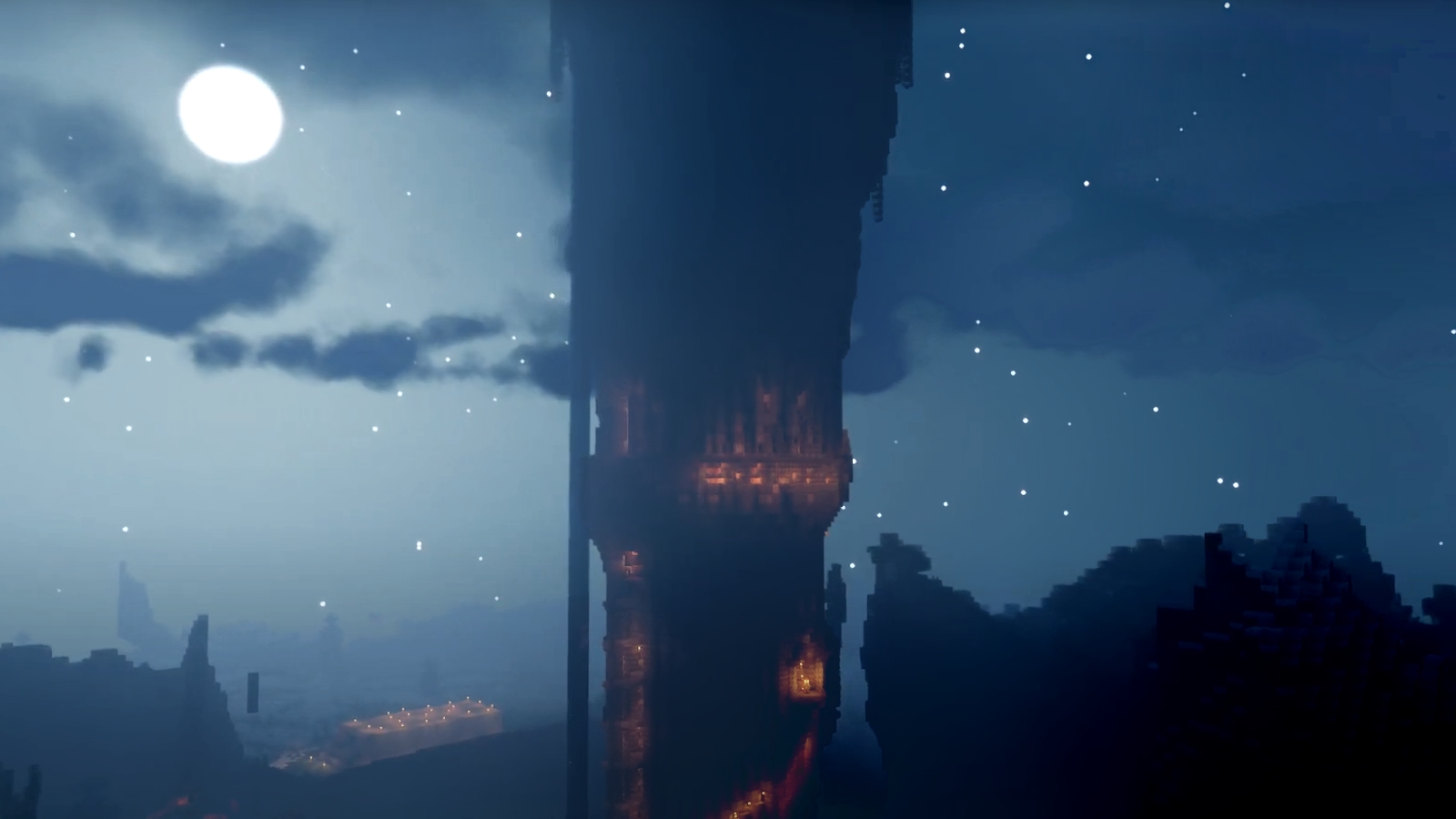 The build itself is an enormous, inversely-tapered tower, rising from a narrow stem in a cavern deep underground, into a massive, rounded spire high in the air. Imagine if Sauron had to build an ice cream cone in a massive game of architectural pictionary, and you'll be on the right track. It's a majestic brute of an edifice, complete with sweeping torchlit stairways on the interior, one of those fancy, non-rectilinear nether portals, and even redstone-engineered glowstone lights that pulse around the circumference of the tower on a timer. It's about as impressive as you can make a big pile of rocks. 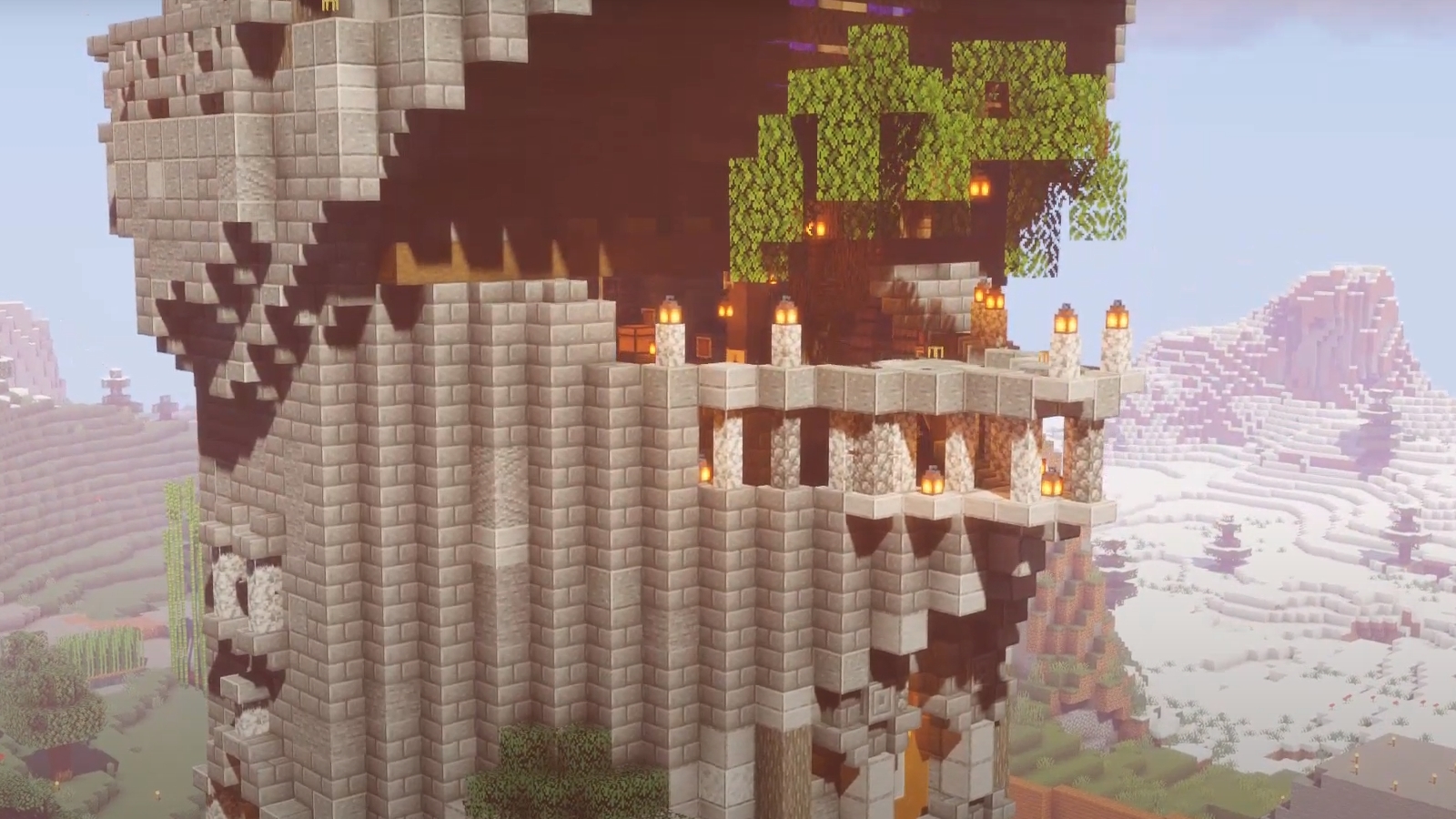 But to be honest, I'm not really here to talk about the tower. It's a sideshow, really, to the main event: scaffolding.

Good old scaffolding. Possibly the best block added during Minecraft's 1.14 "Village & Pillage" update, it's got that magical combination of being aesthetically pleasing and functionally useful, as its unique placement properties make it ideally suited for scaling the sides of megastructures for construction work. You know, like... scaffolding. If you're in possession of a bit of bamboo and some string, you'll never need to make an ugly, time-consuming nerd pole out of dirt again. Scaffolding: a cool guy. 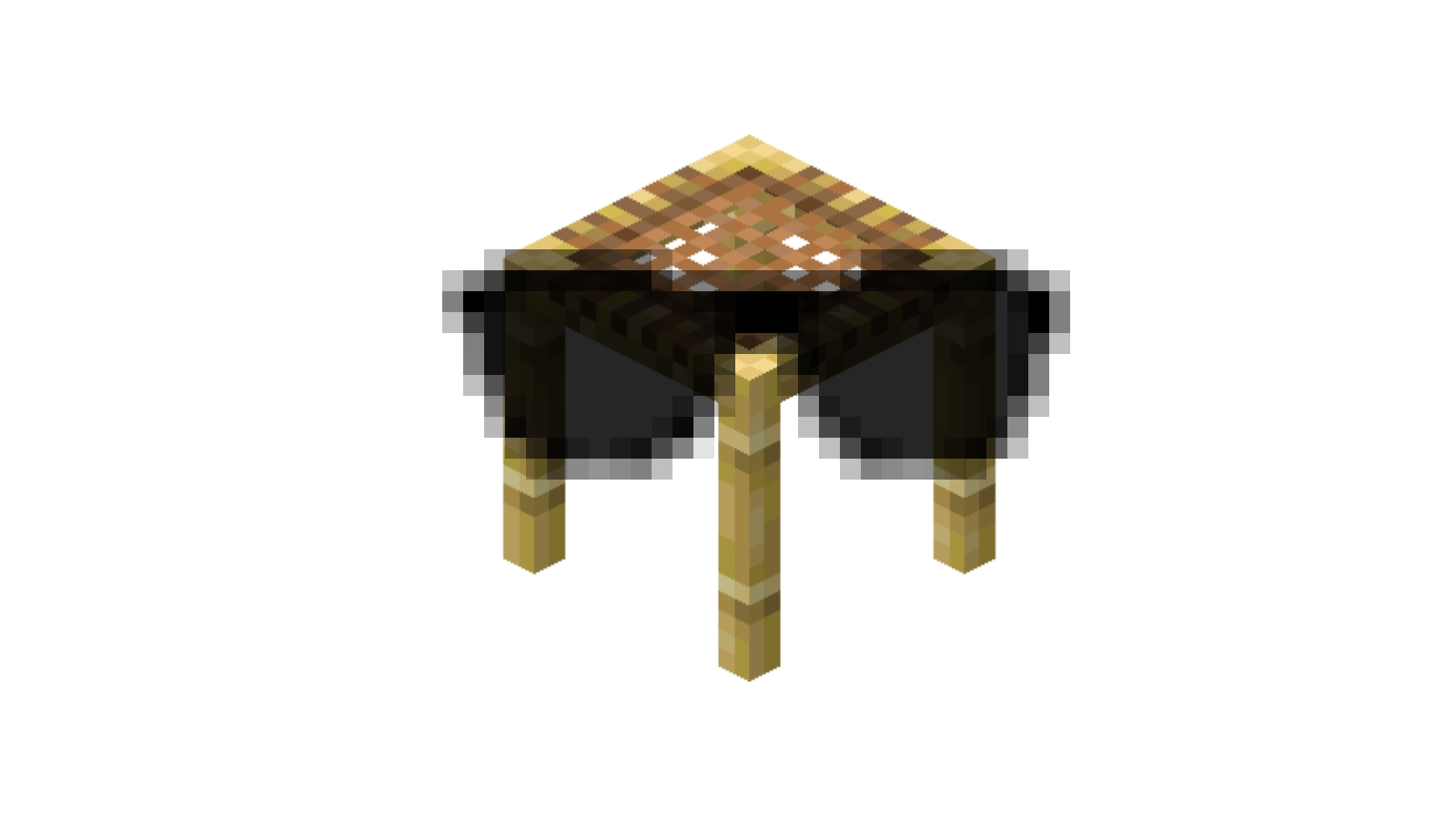 One of the reasons scaffolding's so bloody useful, is that when you bash out the bottom block of a stack (it breaks in one click), every block above falls down with a pleasant, staccato clicky-pop noise, ready to be picked up and reused. It's a satisfying experience, even if you're just knocking down a small pile. But for Kyle's monolithic build, he used somewhere in excess of 5,000 blocks of the stuff. 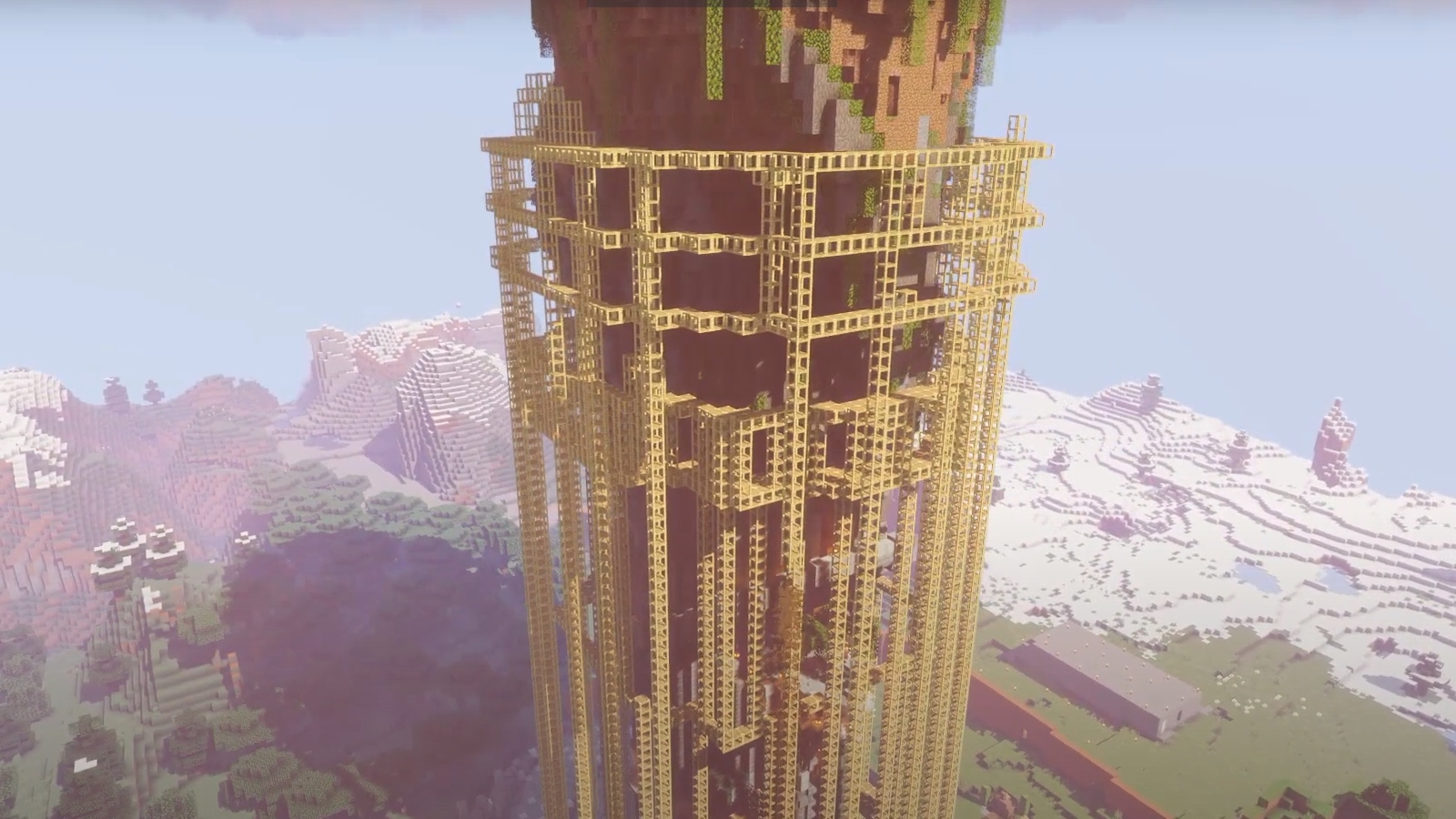 And then, when the tower's superstructure was complete (apparently, he's still to add some finishing touches), he ran around like a wasp with a hammer, knocking it all down. It was bliss to watch, as hundreds of little tan blocks rained from the sides of the enormous building, although the aftermath looked a bit unusual. In this screenshot of the process, from the ground just next to the point where the tower rises from the caves, it looks as if the area has been invaded by a legion of small, rotating coffee tables: 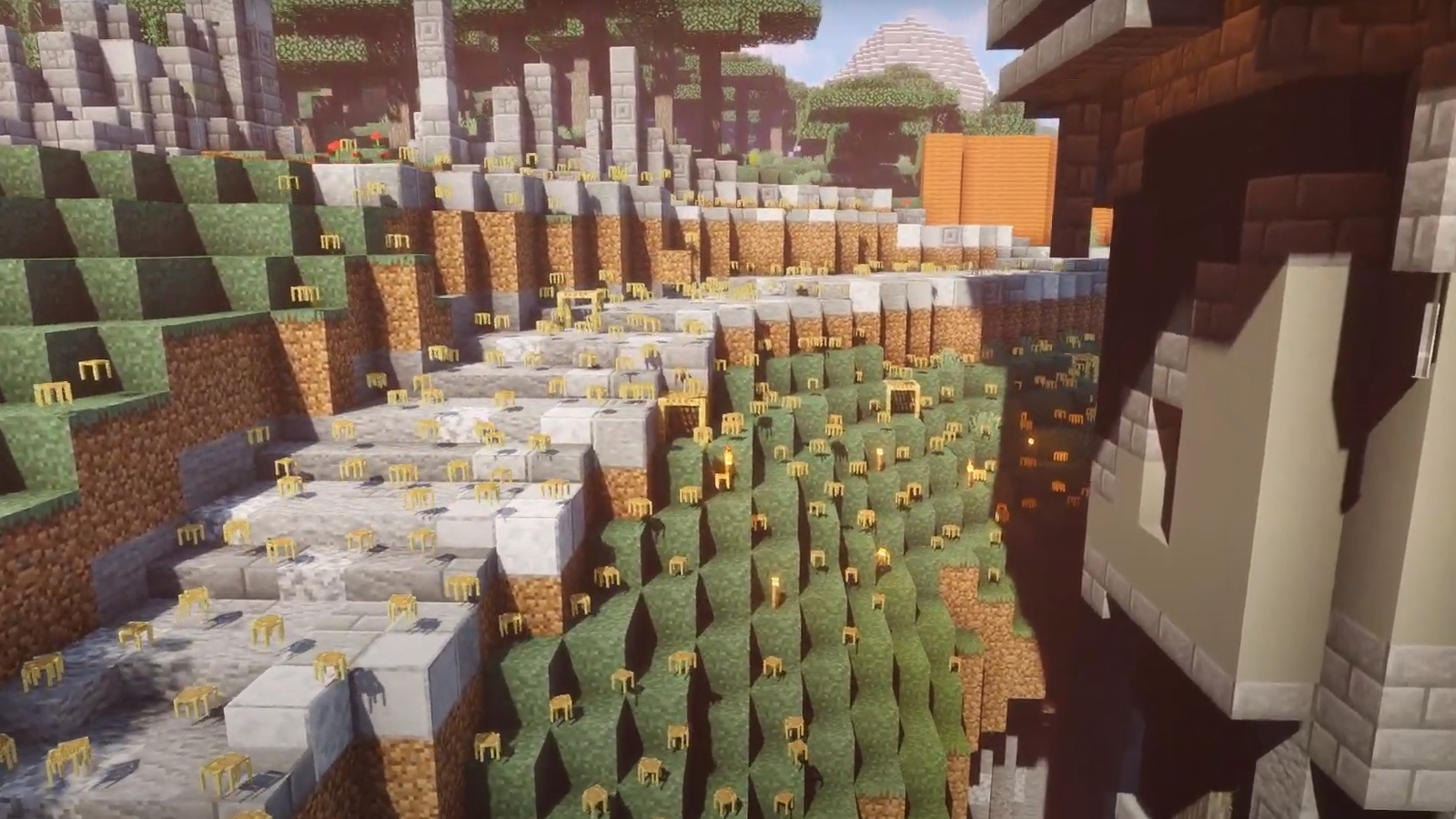 Anyway, Blane was thoughtful enough to film the whole process, so you can enjoy it for yourself. There's a video on Reddit, set to the sort of fancy classical music you'd associate with people looking worried in a mansion, or a car advert where a BMW turns into a sexy mermaid or something. But better than that, IMHO, is the "director's cut" Blane made, set to the bouncy, euphoric sound of Ronald Jenkees. Honestly, it's an exceedingly relaxing business - and strangely satisfying. You owe yourself these four minutes of calm, scaffolding-based joy: