You've got to admire the courage of Brain&Brain's three burly men at sea. If I knew I was going to get swallowed whole by a massive whale every time I set sail for adventure, I think I'd stay at home. But that's not what being burly is about. Instead, these bearded brothers are willing to throw themselves down the gullet of adventure time and time again in a Groundhog Day-style time loop just to see where the wind will take them next. And it's really quite delightful.

With its big blocks of colour, little snippets of text and beautiful folky soundtrack, Burly Men at Sea is like a storybook come to life, which is apt considering developer Brain&Brain actually went and made each of the game's many tales into proper physical books in 2017. Alas, some of them are completely sold out now, as I found out when I finished the game over the weekend and diligently typed the little codes it gives you after completing each of the game's endings into the developer's website. But all of them are still available as digital versions if you fancy spending some extra money some beautifully illustrated souvenirs.

My favourite burly adventure, though, is when the Brothers Beard keep running into the old grim reaper. Having decided not to wait until their whale friend opens up his gob to let them out at some unknown destination, the brothers decide to flush themselves free the old-fashioned way - by giving old Moby's uvula a tug while wearing some handy barrels to keep themselves afloat when they break out.

After paddling around in the hot sun for a bit, they eventually run into Death himself, who's looking very sullen aboard his little gondola. Whether this is some kind of extended metaphor or an actual meeting with death, it's hard to say (they did get eaten by a whale, after all), but in order to save their souls from being whisked off to the real land of the dead, the brothers challenge Death to a race. Because why not? 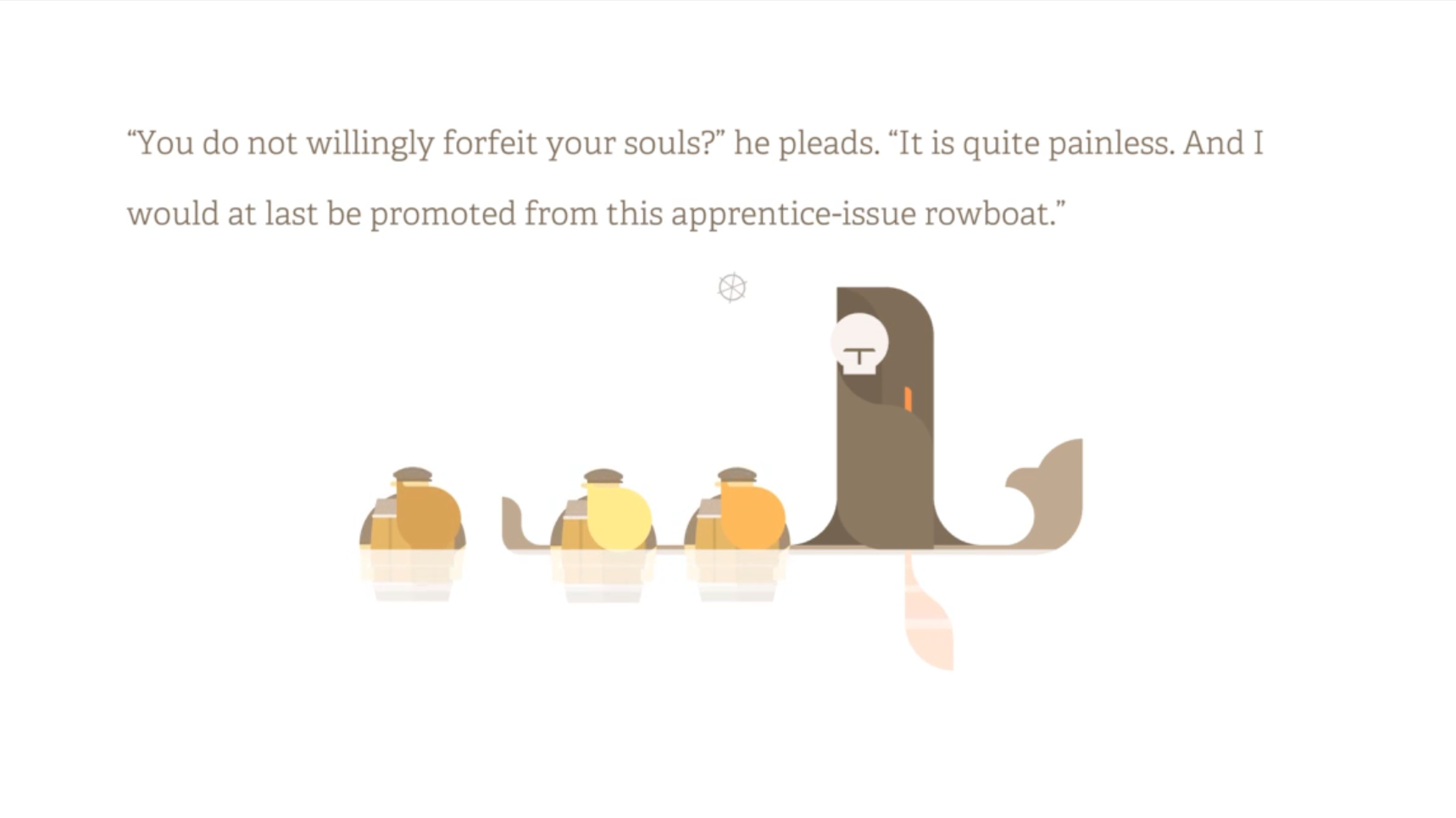 It really doesn't matter whether you win or lose this race, as you'll need to explore both outcomes in order to finish the main story. What I love about this encounter, though, is how cross Death gets when you come back a second (and a third) time to get the other endings to this tale.

You see, he had a promotion riding on the success of bringing the Brothers Beard down to the underworld, and you went and ruined that for him, so he's pretty miffed the next time you run into him. And even if you do then let him win on that second encounter, he still ends up failing because of what happens next. Instead of taking you straight to his supervisor (I love the idea of the grim reaper having a supervisor), he leaves you in a cave, from which you promptly make your escape out of one of two possible exits. So he STILL doesn't get that promotion even after rowing his little dead heart out because he went and lost you in a cave. And let me tell you, he's not happy about it. But he'll still challenge you to another race anyway, because why not.

It's a wonderfully silly bit of story-telling, but it perfectly captures the game's light-hearted tone and whimsical sense of humour. In truth, I started to get a bit tired of the looping, branching pathways after a while (the game needs a visual novel-style fast forward button for the bits you've already done), but encountering each member of its weird and fantastical cast for the first time is just so charming that it almost feels churlish to complain about getting to spend more time with them.

Except the hermit bloke that lives behind a waterfall and decides to sink you and the entire island you're on when you don't accept the magic fiddle he offers you. That guy can well and truly get in the sea.

And did I mention its wonderful soundtrack? It's on Spotify if you want to give it a listen, or you can buy it along with the game over on Steam or Itch.