Europa Universalis II will always be one of my favourite strategy games, even if I don't play it any more because its sequels have improved on it so much. Paradox’s epic map-painting series is one of those dependable few whose each progressive entry gets bigger and better than its predecessor, with the annoying bits ironed out, and the best bits amplified. Still, they’re all pretty much the same, topologically speaking: gigantic strategy games, which let you guide a single nation through the entirety of the early modern period (i.e, everything from Knight Time, through to the invention of the top hat).

I think of them all as a single game, really, that just gets bigger and wiser as it gets older. Like an elephant. Although, you know, a really refined elephant. This elephant, in fact: 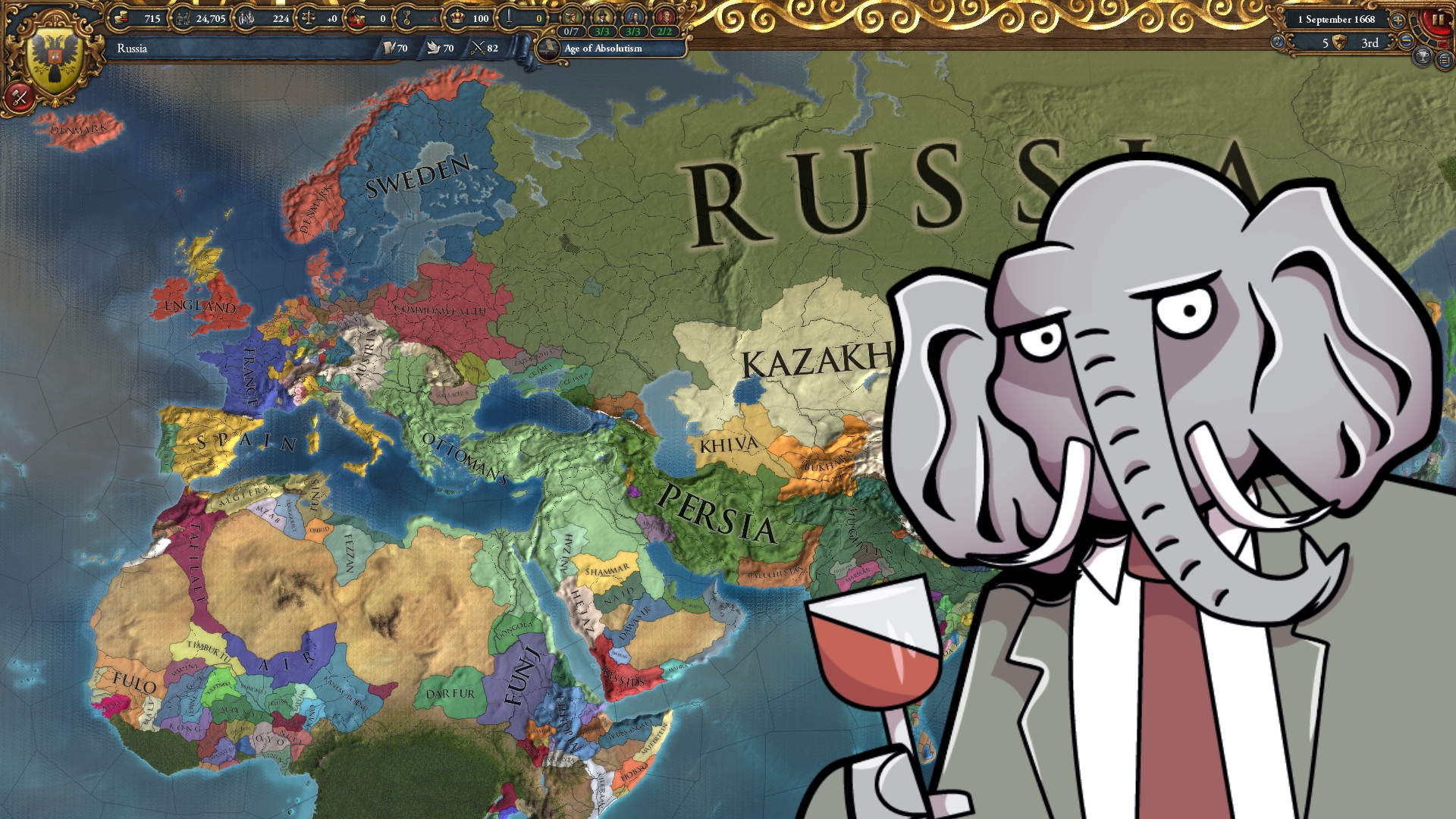 But I met this fellow when he was a much younger ‘phant, back before he got a taste for fine wines, and still lumbered around bashing into trees occasionally. He was called Europa Universalis 2 back then, and I spent many, many hours in his company during my final year at university, when I was meant to be preparing for my exams. When I was meant to be doing… anything else, actually. For about six months, I pretty much just played EUII.

Interestingly, the way I can tell which Europa memories come from that year, and not from later plays of EUIII and EUIV, is by remembering what music was playing at the time. For some reason, the PC I played it on didn’t have internet, and its music library comprised a burned CD’s worth of mp3s - about 250 songs, I think? - compiled for me by a mate in Edinburgh. That was all I had to listen to, for a while, and I got to know it very well indeed.

It was… an eclectic mix. I will always remember the Union of Lublin forming the Polish–Lithuanian Commonwealth to the backing of Reise Reise by Rammstein, while the ghastly Treaty of Tordesillas, in which Spain and Portugal divvied up which indigenous land they would allow each other to steal in 1494, is indelibly linked in my head to The Final Countdown. Meanwhile, Boney M’s Rasputin (there was a lot of disco on that list) will forever - inexplicably - be the theme tune for the establishment of Counter-reform Catholicism by the Council of Trent in the late sixteenth century.

Admittedly, none of this did much to help the history of science degree I was meant to be completing, but as you can see, it taught me lots nonetheless.