People are screaming at either side of me. "HE'S THAT ONE AT THE FRONT! SHOOT HIM!" They're talking about me. I'm staying perfectly still, as though my friend's vision is based on movement, like a T-Rex. The shot rings out, and all the screaming stops. The last bullet has been fired - not into me, but into an innocent NPC who happened to be looking suspicious at the front of the pack. I'm now free to abandon my statue act and sprint towards the finish line. A great big grin crosses my face at the knowledge that nothing can stop me now.

Then, from the corner of the screen, another giant crosshair suddenly appears and makes its way towards my head. It was all a ruse - they had another bullet ready, and were baiting me into revealing myself. The room is a sudden cacophony of "OH SHIT"s and "WAIT NO"s - all coming from me. I toggle between sprinting and static to make myself as difficult a target as possible for the sniper. But it's too late. A shot rings out once more. I fall. And then, from the crowd of NPCs, a third player starts sprinting towards the finish line. This time truly unopposed.

That scene comes from Death Race, one of the five game modes in the absolutely marvellous Hidden In Plain Sight, a local multiplayer stealth game where you can have one of two roles. You can attempt to remain hidden as a small figure amidst a room full of similar-looking NPCs as you complete objectives. Or you try to sniff out the human players and deal with them before time (or bullets) run out. Sounds quite like SpyParty, doesn't it? And Hidden In Plain Sight's creator, Adam Spragg, admits that it was very much inspired by SpyParty to begin with. But since those early prototypes it's turned into a truly special experience. 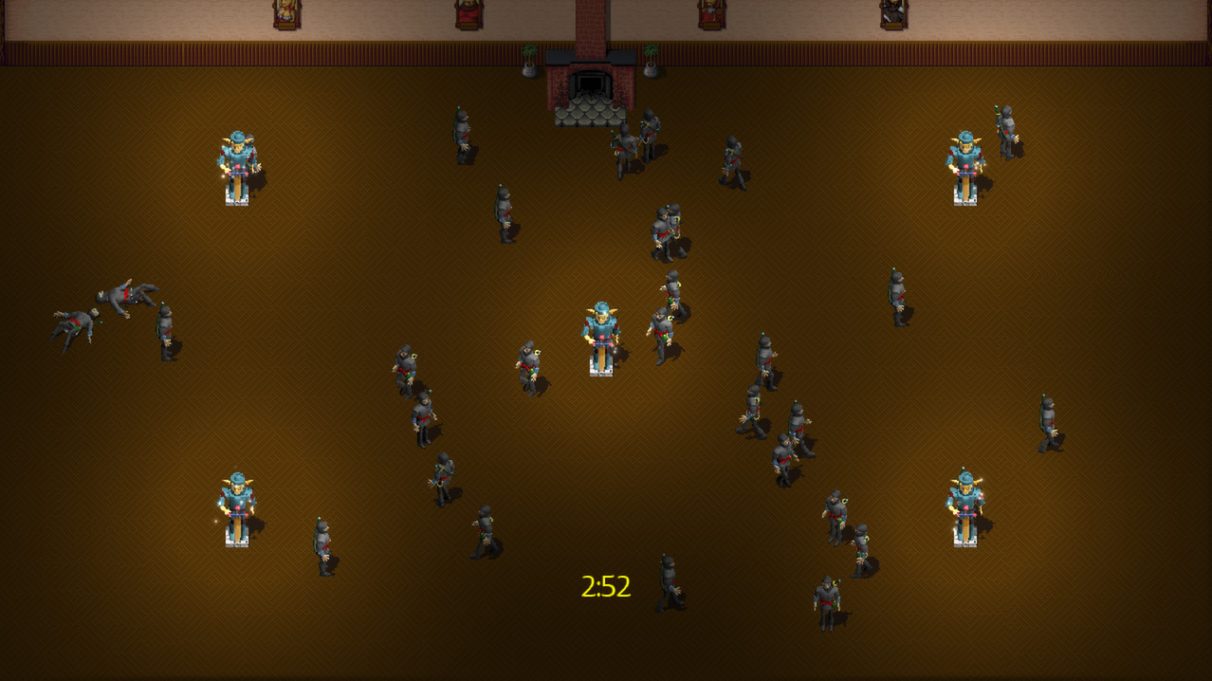 Gahh. Too many amazing game modes, not enough words. I'll just talk about my favourite - the aforementioned Death Race. It's very simple: all players and NPCs start on the left and must make their way in a straight line to the right. The first to cross the finish line wins, but if you separate yourself from the pack too much, you'll become suspicious. Like all the other game modes, you have to balance speed against suspicion at every turn. But what's amazing about Death Race in particular is that every player is simultaneously the spy and the sniper - in addition to your little characters, you each control a crosshair that can fire one bullet anywhere on the screen.

I can't begin to explain the tension of having your friend's crosshair meander across your head as you stand perfectly still, willing the beads of sweat to be sucked back into your skin lest you give yourself away. Just trust me when I say it's taking every mote of willpower in my body to avoid talking about all the other amazing experiences I've had with Hidden In Plain Sight and extending the word count of what Brendy reminds us is meant to be a short retrospective. It's a truly special game, and all the manic screaming and crying and teary-eyed laughter not only makes it the loudest stealth game in existence, but also the best party game I've played.