What a world, where I find myself fondly reminiscing about that 1998 videogame adaptation of that 1978 musical adaptation of that 1898 classic sci-fi novel. With Jeff Wayne's The War of the Worlds, you didn't need years to pass and technology to improve in order to retrospectively realise what a mess the game was. I was just a single-digits-year-old kid and even then I knew it wasn't very good.

But I didn't play it for the challenge, or the greenery, or the story, or any of the reasons I might pick up a new game today. I played it for two things. The first was the music, taken from Jeff Wayne's concept album and remixed to become the instrumental backdrop of your tripod-stomping genocidal march across the British Isles. It's still the greatest "musical" ever, and nothing anyone says or does can change my mind. 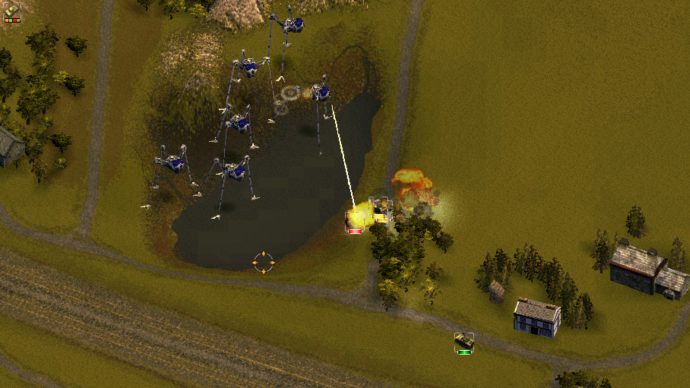 The second reason was because I was a simple and destructive child (as you'd know if you read my HYP on the similarly violent World Cup 98), and few things sparked the pleasure centres of my youthful brain like watching my squadron of utterly unstoppable Tempests and Fighting Machines tower over those pitiful human houses and tanks and convoys, and melt them down with a single collective scorching blast. In the words of Richard Burton, "Every tree and bush became a mass of flames at the touch of this savage, unearthly Heat Ray."