It's one of my most distinct early memories. I was about four or five years old, watching my dad play World Cup 98 on our big bulky cream-white brick we called a computer monitor back then. I was absolutely enraptured, and asked if I could play. It was the first time I'd played a "real" (read: non-educational) game on the PC.

He finished up his match, and set up a game on the lowest difficulty setting. I believe I was Brazil, playing against China P.R. - the strongest team against the weakest team, according to the game's rankings.

I played, I lost, I loved every moment of it. And now, nearly two decades later, my PC gaming journey has gone full-circle with me writing about it on RPS. It sounds very profound and poignant when I describe it that way, doesn't it? The reality was a little more... yes, "bloodthirsty" is the word. See, I realised quite quickly that the cluster of black and white pixels the game tried to convince you was a referee was not particularly committed to his job most of the time. You could almost commit murder on this pitch, with bullet-like sliding scissor-tackles that made you wonder whether you'd discovered the new most efficient form of amputation. 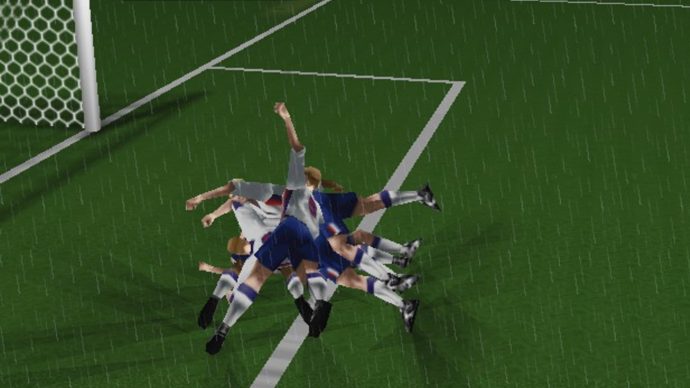 The poor folks on the China P.R. team were probably scared shitless by my youthful, gleeful ferocity. It reminds me of my primary school football days, where the older kids had absolutely no qualms flattening the smaller kids in their pursuit of the ball. I was both smallest and youngest in my year. Maybe that's why I took such vindictive pleasure in the role reversal whenever I played World Cup 98.

Skip ahead a few years and we bought our first console, an Xbox, with a selection of games including Pro Evolution Soccer 2004. And it took some time to acclimate. To me, thanks to World Cup 98 (and to my primary school days), I had this notion that part of the game was eviscerating the legs of the player who had the ball - but for some reason that wasn't allowed with PES 2004, and every football game I've played since.

Nowadays, with the latest PES games (yes, we're a PES family, not a FIFA family), you could sneeze on another player and be awarded a red card by the ever-vigilant (and apparently germophobic) referee. So, while time and technology has left it far behind, World Cup 98 still holds a dear place in my heart, both for its role in opening up the world of PC gaming for me, and for its freedom in delivering bone-shattering Taekwondo kicks with a viciousness that would put Suárez to shame.