If you click on a link and make a purchase we may receive a small commission. Read our editorial policy.
Premature Evaluation is the weekly column in which we explore the wilds of early access. This week, Alice has been tracking ghouls and shooting giant centipedes in HellSign, a ghost hunting RPG... thing.

HellSign was sold to me as being like a “monster of the week episode of Supernatural or Buffy”, which is right up my proverbial alley. And if you squint you can sort of see how that description applies. I suppose it’s a useful description because it’s otherwise difficult to fit HellSign in a neat genre box; it’s isometric, it’s sort of an RPG and it’s sort of a shooter. The thing is “it’s like Buffy and Supernatural” also set my expectations way higher than they should have been.

HellSign is very difficult to take screenshots of because your character is tiny and most of the map is dark, the only source of light being your torch as you creep around a poorly furnished bungalow. But we're getting ahead of ourselves. Before that you have to create said character, and it starts well. Women are an in progress feature, natch, but it lets you choose from a number of backgrounds for your little monster hunter, including detective, mercenary and, of course, renegade. 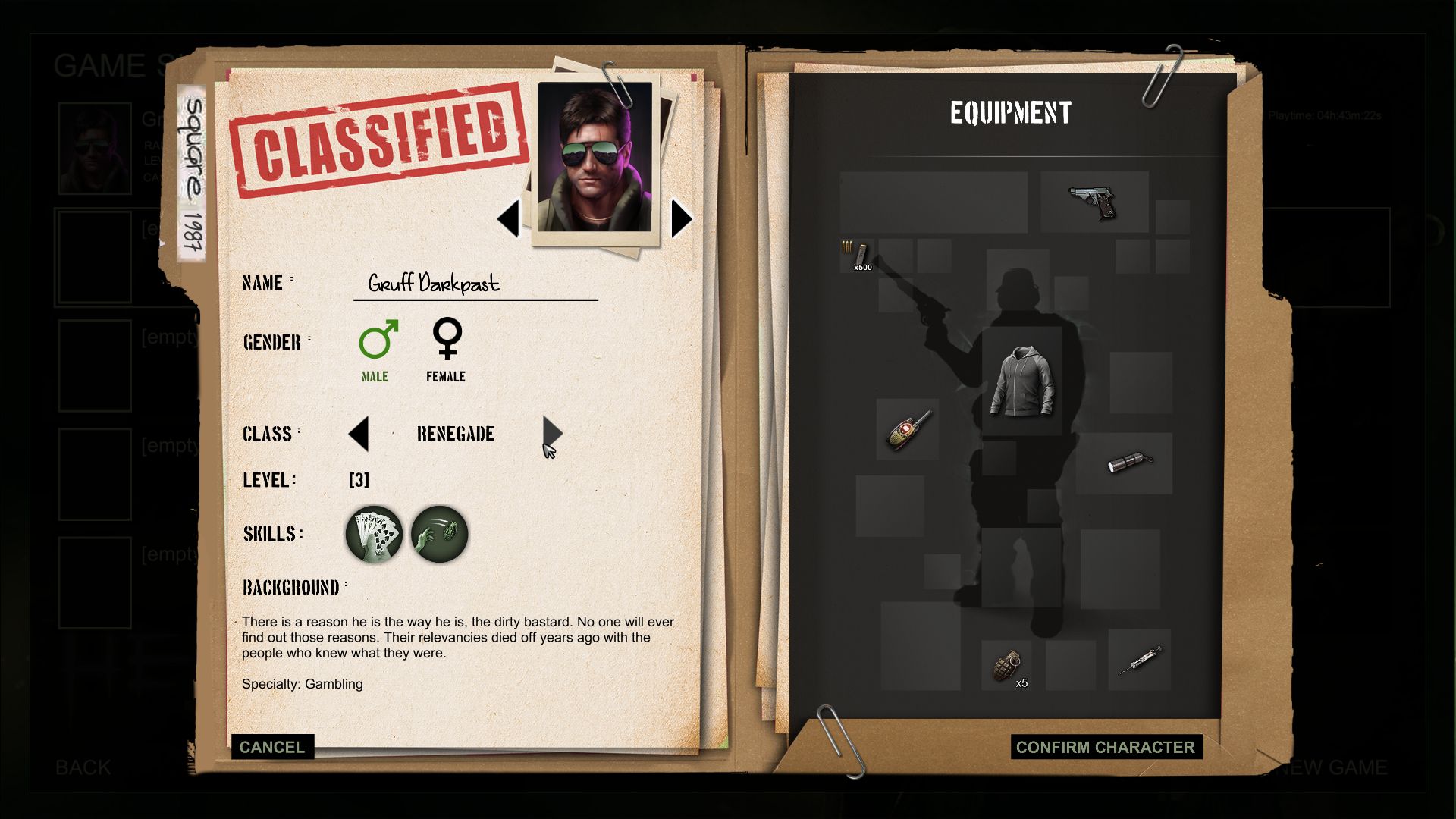 Let me introduce you to Gruff Darkpast, a maverick ghostpuncher who only has one rule: that he don’t play by the rules. This is unfortunate as there are several rules when playing HellSign. Gruff’s first introduction to the job ends abruptly when he breaks the game by finding a clue through trial and error before he was supposed to find it using his magical ghost finding walkie talkie (GFWT). Take that, rules!

After reloading, the introduction is simple enough: use your different bits of ghost tech to find evidence of said supernatural nasties (the GFWT is apparently called an EMF Meter, and you also have a black light to uncover trails of blood, a microphone to pick up audio, and an optional heat thermal tracker). The evidence will be hidden in or around a feature of the house, be that a bit of clothing on the floor, a chair, or even a haunted fridge. You then cross reference your evidence with your Cryptonomicon, a tome full of supernatural research, and diagnose! That! Ghost!

Armed with a pistol, Gruff set out on his own, as optimistic as his tough emotional walls allowed him to be, and explored his first 'abandoned house'. Gruff was killed almost immediately by a squad of giant spiders who fell down from the ceiling, and zoomed back and forth on the map as if each of their eight legs was shoved into a roller skate. Both giant spiders and giant centipedes can drop down from the ceiling with no warning. They are both accompanied by a constant chittering insect noise, and the combination of their speed, the tiny hitboxes and aiming reticule, and the dodge window being extremely unforgiving, meant that Gruff left many homes empty handed. and dead. Luckily a MacGuffin related to the plot meant he was resurrected every time. Thank God his safe house wasn't put back on the rental market.

Because the dilapidated houses all look the same and the spiders and centipedes remained the same too, Gruff found himself in a nightmarish Groundhog Day, dying often and achieving nothing. Eventually he managed to get a few haunted pig masks and tape recordings of screaming back to his van by running away as soon as he found them. These he was able to sell to a shady dude in the bar, who would buy them for reasons neither I nor Gruff wished to examine in much detail. After a while gruff had enough money to buy some better gear and take on more jobs from yet other shady characters in the bar. HellSign is set in Australia, so their dialogue can be quite colourful (and it explains why none of the locals seem that phased by giant, murderous insects). 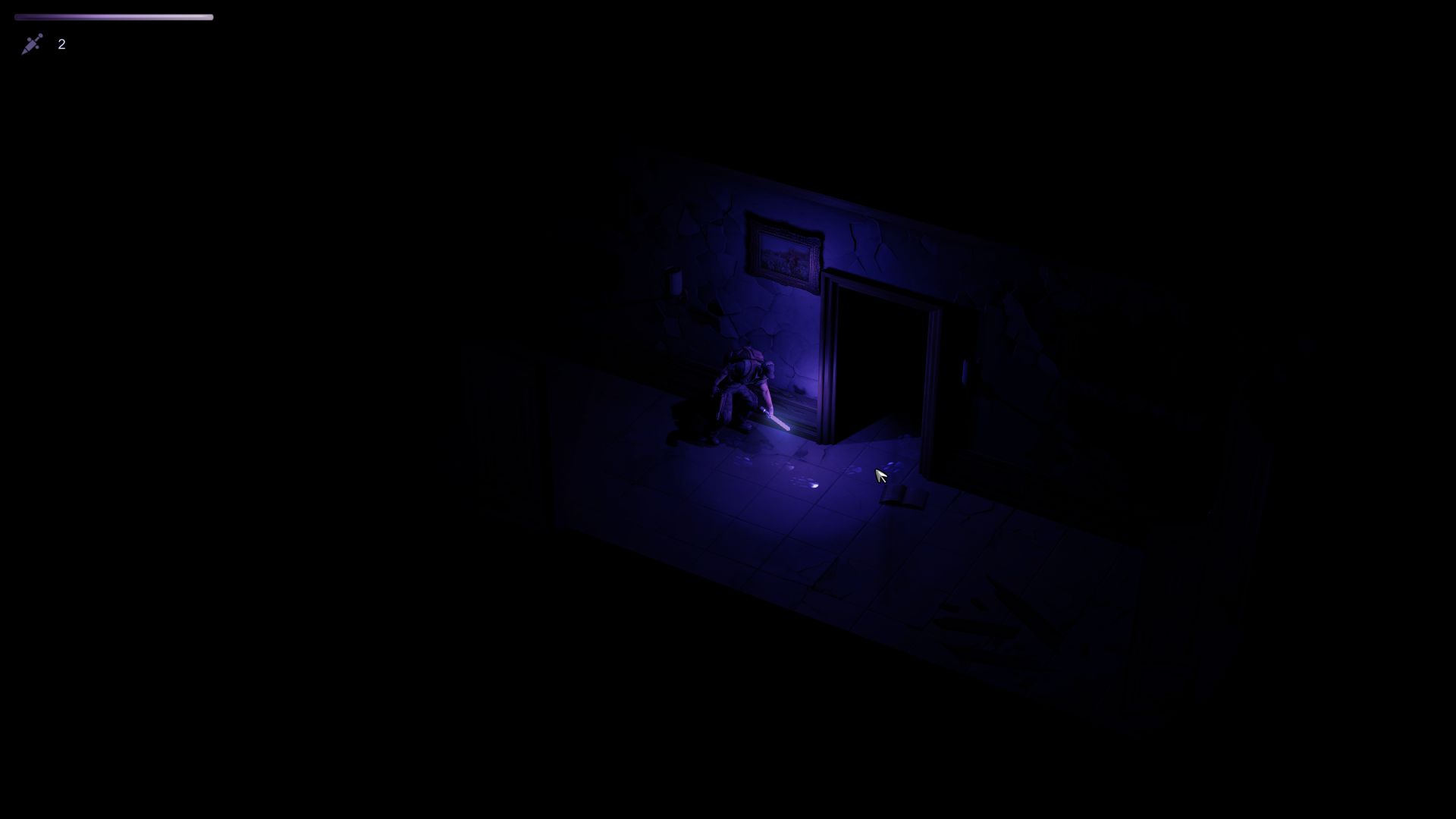 This is the largest, but by no means least, of the problems HellSign has right now. The game is prohibitively difficult at the start, and while it's was satisfying when Gruff did begin to tip the scales, it still felt like an unrewarding grind. I enjoyed the idea of hunting ghosts, but in practise it's frustrating; your tools can glitch and start signalling randomly, and following blood tracks is an exercise in squinting at faint blue dots and hoping you're not misreading a residual sneeze on your screen.

None of this is helped by the current lack of diversity in setting and enemy type, of course (though different assets are on the dev list of things to come). It's missing a good few tutorial bits it could benefit from too, 'cos Gruff didn't realise he could shoot locks on doors until he did it by accident, and he's still pretty confused by the crafting systems -- though impressed by the variety of weapons and equipment he can choose from at this early stage. 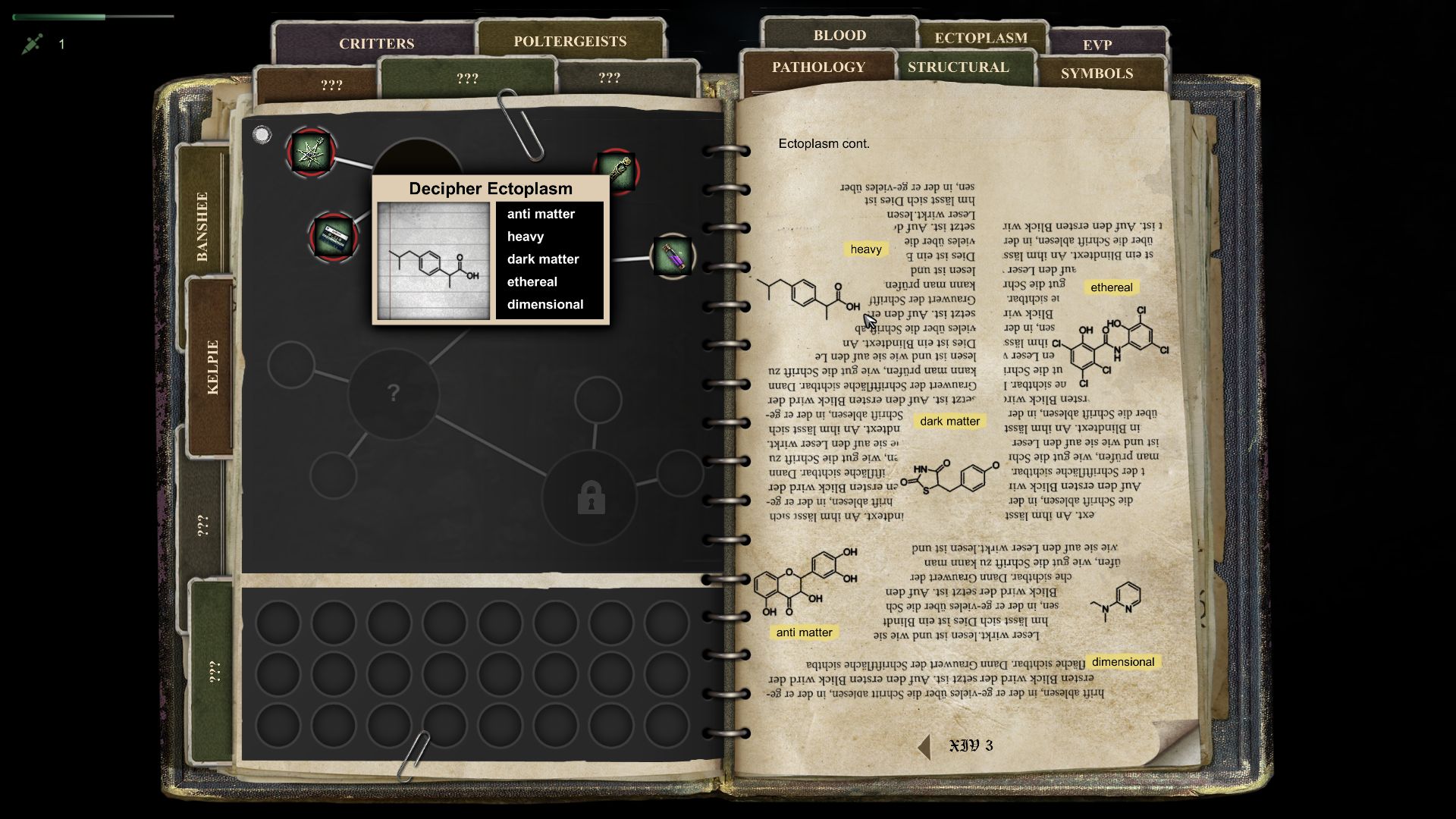 Gruff did eventually get good enough that he could progress to clearing houses of ghoul infestations. Ghouls look like big hairless dog-monkeys, and they charge on all fours in a floaty way that is nevertheless hard to avoid. Gruff did not do well against them, and neither did he progress far in the first chapter of the story (which involves a giant demonic tattoo on his back and some kind of hell dimension), because it all felt like too much work for too little play. There are promises of being able to trap beasties and directly fight ghosties, even, but getting there doesn't seem worth it. The skill tree has skills that are 'available at level 99' and the grind is real enough that it could be gating for the early access, or it could be very real.

HellSign's main idea is good enough that I want to clear a house even as I write this, but unrefined enough that when I do I forget why I wanted to, like craving a cigarette but hating the taste once you light up. And its definitely not like Buffy The Vampire Slayer. Not least because there isn’t anyone like Giles in it.