If you click on a link and make a purchase we may receive a small commission. Read our editorial policy.
Hounded Out is a short diary about life on our Minecraft server, where nobody but Sin has any respect for the wilderness.

Previously on Hounded Out: My dogs and I narrowly survive a heroic rescue of the townies in their sinister underground excavation. Our generosity rebuffed, we head North, seeking peace in the wilderness.

Travelling with three easily distracted dogs makes it difficult to get lost, as you retread your path every few minutes to retrieve them. This has probably saved me from getting lost for months, although it has happened before and since.

I won't recount every detail. Carrying wool and birch let us sleep in tiny dugouts in the forests and hills. Nothing stood out as a good campsite, until I walked through Malvern Gulch. This narrow, watery pass wound northeast and along its steep sides was a wolf. He appeared several times, always in some unlikely spot on high. His name was thus Goat, and he joined the pack that very night as we left the gulch and found a village.

Villagers are weird. They mill around, arms folded, honking and staring. I'm not sure they're human. But they had an armourer and a farmer, who offered gems for any coal or carrots I could bring. A plan formed. Between the village and the gulch where Goat had given us his sign was a meadow where I set about building a proper, irrigated farm, while also mining coal from the surface and local caves. I built a shelter into a hillside and oh my god is that a cat it's a cat there's a cat it's a cat ahhh.

As in real life, I quickly befriended the cat. It is useless. It immediately sat on my storage box so I couldn't open it until the little gobshite moved. In a few days I had enough coal and carrots, and went back to the village. The armourer and farmer denied everything and refused to buy either product. And that's why we called it:

For days and days, that's how things went. I farmed, fished, and supplied the village with workshops and houses. I sold whatever I could, bought tools, and built up a supply of emeralds that I buried to foil the lurking marauders. A wandering trader visited me and tried to sell me flowers and ice. On his last visit he lost both his pack llamas and got stuck in a pit. I divined that his name was Heinrich and he wasn't very bright.

That's when a message came in from my fellow players, the townies. I was curious to see how they were doing. I looked at the dogs. It was time. With that the old Birchbark camp was on the way. Taking pity on Heinrich and his failing flower supply business, I left him in charge of the carrots, leaving Honcho, Cape, and Arsehole the cat behind, and began the journey. With Cobweb and Goat in tow it was a two-day journey back to my old farm, where I found most of the cows gone, probably dead, and a huge, ominous shadow looming over the meadow. 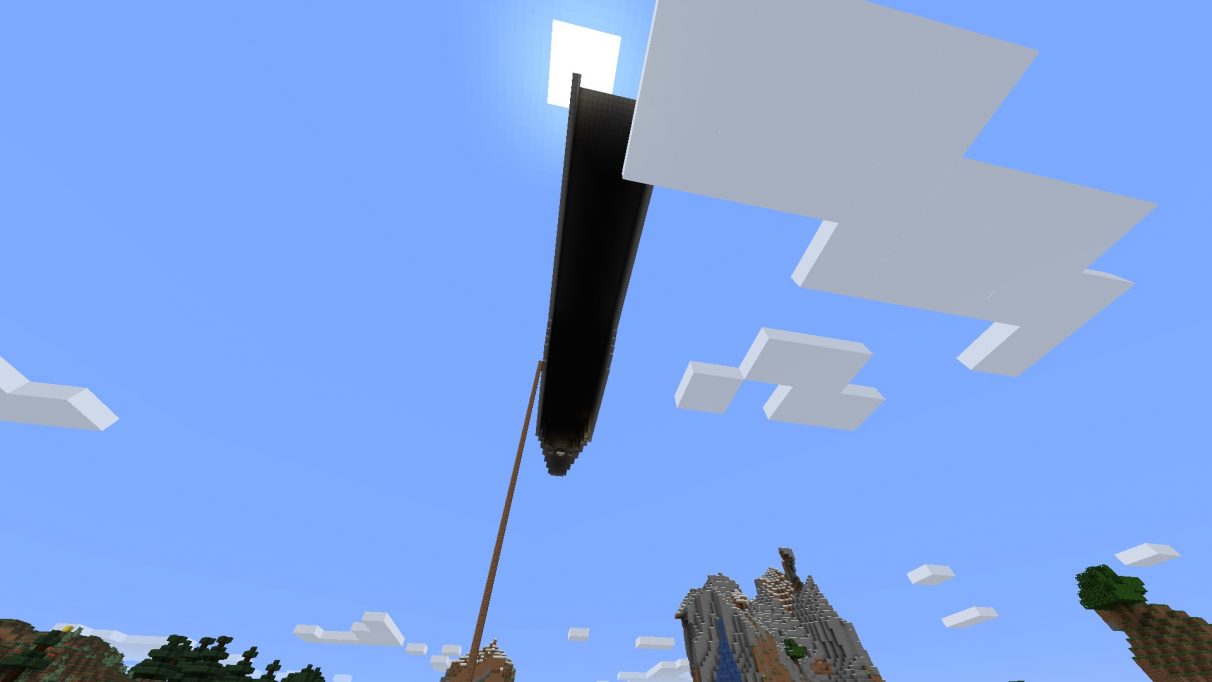 Whatever. Not my problem. Bit put out about the cows, admittedly, but they could have just wandered off. I slept at the old camp and walked to town, where I got a Nately welcome.

"I think you've inherited the surface," he said. He led me downstairs, where I half expected to find a cadre of deranged dwarves running around a pile of bones in nothing but threadbare socks. "I heard you were hungry?" I asked.

I giggled. I'd made the two-day journey to find them all starving and repeatedly dying to monsters they'd awakened. I brought cake and pumpkin pie. I had not died since the very early days. 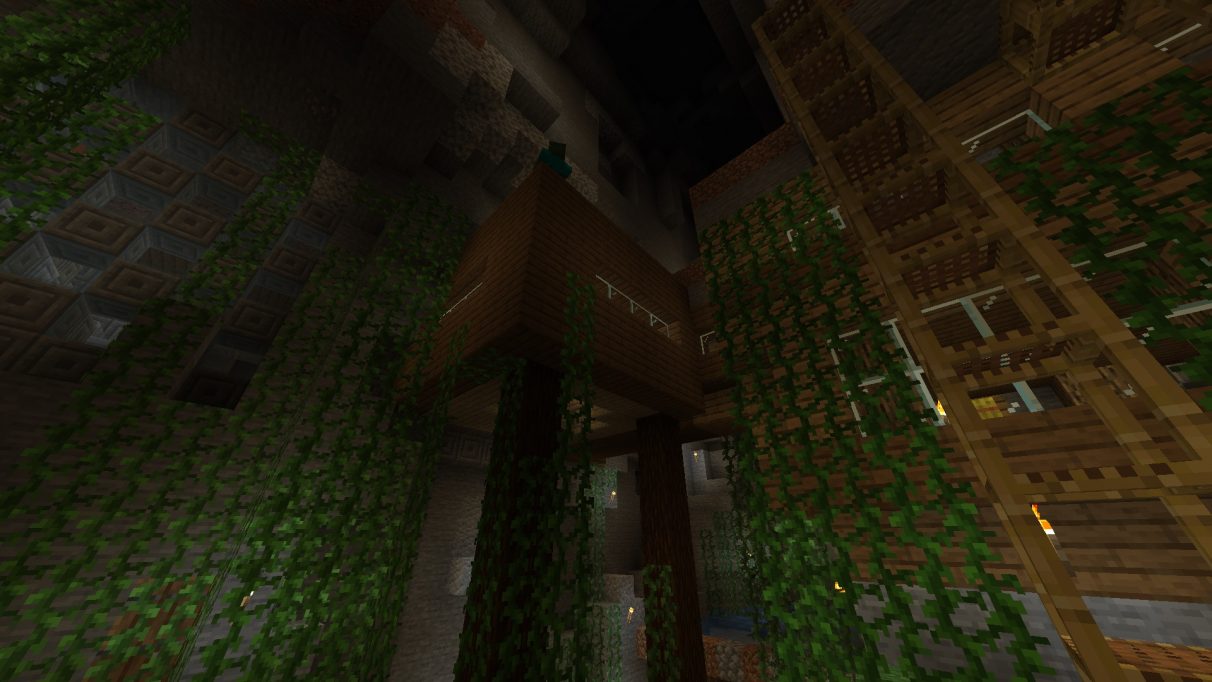 I got a look around this time. Astrid had transformed herself into a soot-caked goblin, and occasionally vanished down some secret door or other. The hall itself was... honestly, I was impressed. Far from the over the top monument I've seen in other lands, it was a tasteful, warm place. Wooden halls and workshops built atop stone, modest storage and a simple automated disposal chute in a corner. Overlooking the underground chasm was an unused connecting hall. While Nate was distracted I filled it with masses and masses of wheat, and began hurling food around because I could. He was overjoyed, marking that it would be great for morale, as the townies had suffered a brutal few days in their wretched pit.

They magnanimously offered me gold for the mountain of wheat. I laughed like a baron. "I have no need for gold!" I said, in exactly the voice you have to say that in when it's true. I suggested emeralds, since I can bank those for trade with the village. Nate scurried off, while I set up the cakes. "Here you go," he returned, "six emeralds." 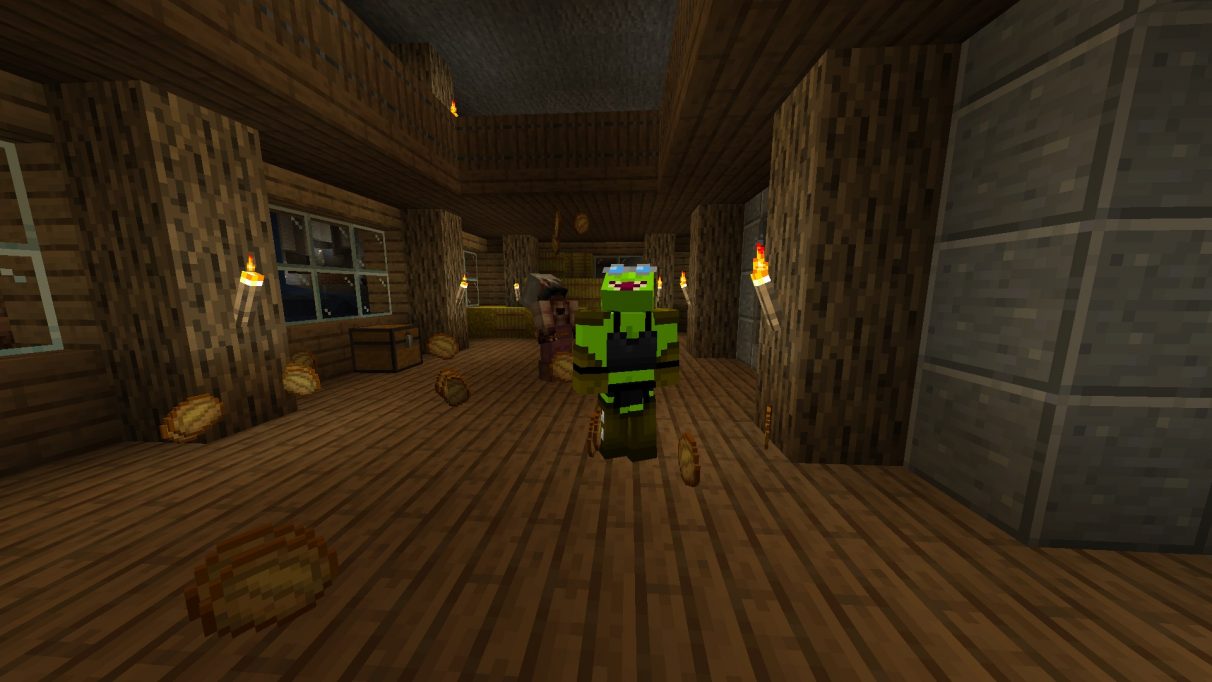 A mere two of my ten strips of farmland produced enough to sell for more than six emeralds. It was charitable to indulge them.

And there, at last, it happened. We reached mutual respect. The town had built something great here, and for ages I'd been away, gathering the exact supplies they needed and delivering them just in time like the paranoid, beetroot-stained cavalry. Astrid and Nate ran around what was now the larder for a while, throwing celebratory potatoes and enthusing about their various projects. We had stew and cake. It was nice.

Nate offered me a room at the undertown. I hadn't noticed before that they'd built a sinister portal down here too, to match the one on the mountaintop. No, thank you, I will not live next to the cursed gateway to hell. I did look around though. I took the dogs for a run around the cavern, where they chomped a careless skeleton, and I peeked into some of the bedrooms. Everyone was busy with their own things - I could see construction work and mystery tunnels and doorways snaking off here and there. I was glad. But I wasn't staying. We had a farm to run, and a village to expand, and more and more, the urge to move on again, to find new lands and wander. I let the dogs roam as they usually did, and logged off.

When I returned, there was an urgent message. Goat was in Hell.

Next time, on Hounded Out: The conclusion, in which nothing is concluded.