This is The Mechanic, where Alex Wiltshire invites developers to discuss the difficult journeys they underwent to make the best bits of their games. This time, Darkwood [official site].

“All roads lead deeper into the woods,” says one of the twisted characters in Darkwood, an excellent and haunting game of survival in a nightmarish forest. There are horrors in its tangles of subsuming wood, things you won’t quite understand, characters who aren’t quite human, aren’t quite friendly. A game in the tradition of Pathologic and STALKER, Darkwood was developed by a Polish team of three called Acid Wizard Studio, and in many ways, it sounds as if that mordant quote is a comment on their experience of making it.

Their desire to marry a strong non-linear story, meaningful choice, a threatening atmosphere, and a procedurally generated world that changes shape during play, led to serious challenges. As team working on their first-ever game, they’d blundered into tackling some of the biggest design questions in games today. “It was an extremely stressful experience,” artist and writer Artur Kordas tells me, as Darkwood’s development pushed into five long years. And part of their solution? Killing permadeath - a decision that led them deeper into the woods.

The best way to understand what Acid Wizard were trying to achieve with Darkwood is to know that they’re not fans of horror films. “We do not like jump-scares, we do not like the clichés repeated in this genre, we do not like to implement brutality for mere brutality’s sake,” Kordas says. “What’s more, we do not like to be scared. Horror can only interest us when it rewards us with the effort put into overcoming this fear; when there is some purpose to terror and it is not an end in itself.”

“We wanted players to identify themselves with the protagonist and not make any decisions with no thought behind them, to respect the game and the threats lurking in the forest,” says programmer Gustaw Stachaszewski. “This was meant to be one of the main elements building the atmosphere of dread and uncertainty.” 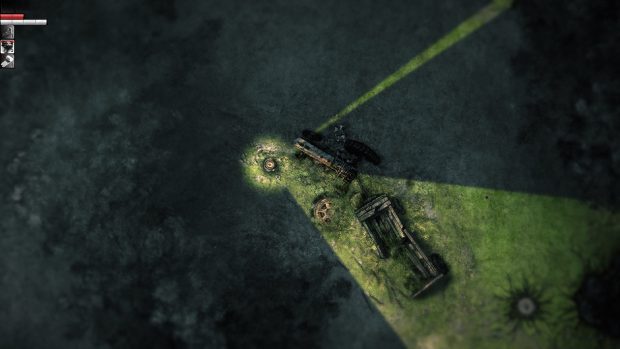 The key to achieving this atmosphere seemed obvious: permanence. After any interaction with important characters the game would automatically save, and it wouldn’t allow players to go back to previous saves. So far, so Dark Souls, which of course was an inspiration. “[In Dark Souls] you approach each character with caution because it might be deadly threat or it might be a helpful NPC whose unintentional killing can have disastrous consequences. We wanted a similar effect in our game,” Kordas says.

Death, though, would be more permanent than it is in Dark Souls. Darkwood’s version of permadeath wouldn’t completely reset the game - some strands of previous attempts would persist between runs - but the woods would change, procedural generation opening new locations to visit, new characters to meet and stories to follow. “The game was very unpredictable, and the player would not know what they would encounter, which was very good for the atmosphere,” says Stachaszewski. 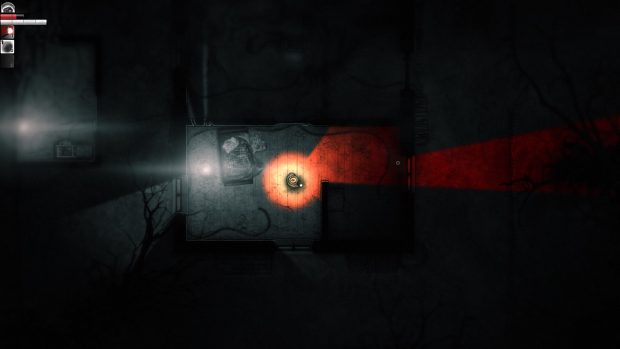 “The procedurally generated world was not an end in itself, it always went along with the Rogue-like nature of our game,” says Kordas. “It seemed to us an indispensable element, without which the permadeath would not make sense. It was a kind of necessary evil.” That’s because procedural generation proved extremely hard to implement. First there was the problem of creating an interestingly structured world rather than a collection of random objects. Second was getting interesting, atmosphere-building events into this world.

“When you create events and places manually to create effects like anxiety, you take into account many factors,” Kordas says. Tension can be built by using many tricks, such as changing light intensity and colour gradients, narrowing the space, intensifying sound, using repeating motifs, placing strange and disturbing combinations of objects. But as Kordas explains, “All this requires many elements of the puzzle to work together in harmony, like graphics, sound, level design, triggers, along with some intentionality. It’s a bit like creating a short story. It is extremely difficult to create a system that would be able to generate such successful mini stories every time.” 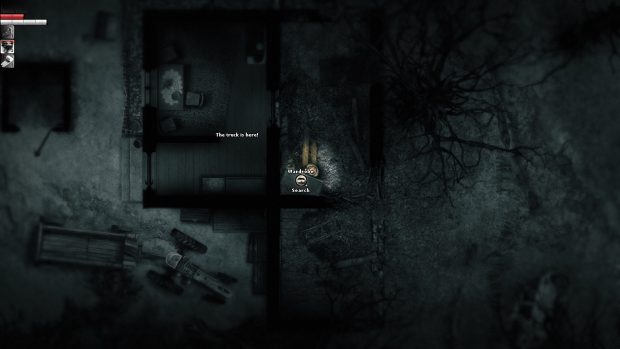 And then there was the matter of the larger story. Acid Wizard had crowdfunded Darkwood on Indiegogo with the promise of scripted events which would form an extensive non-linear storyline with Fallout-inspired choice and consequence. “After the campaign it turned out that this concept was not going well with the highly randomised nature of the game,” says Stachaszewski. Still, the team sank a lot of time into trying to join it all together. They attempted to create a procedurally generated main world which would place hand-designed locations, but they knew they’d have to make a huge number of them, far more than the three of them could produce. They tried a system which knitted together modular locations which contained randomised elements, but that proved too difficult.

Disagreements started. Stachaszewski stood by the original Rogue-like horror vision for the game, arguing that it’d help Darkwood stand out and cash in on a genre which was burgeoning at the time. It would also limit the game’s scope. Since no one had scriptwriting experience, should they really try to create a complex non-linear storyline? A Rogue-like structure would circumvent it.

Kordas, nervous of procedural generation, preferred the idea of making a more traditional RPG-like game. He liked the creative potential of scripted events and a strong storyline. Besides, he knew how much the Indiegogo funders liked it and feared their reaction if the game shipped without it. The third member of the team, animator Kuba, sat somewhere in the middle. “The discussion was quite turbulent,” Kordas says. “But I don’t remember any danger of it tearing the team apart; I guess we knew that we were in the same boat and we just had to find a solution and make a game. It was ours to be or not to be in game dev.”

Kordas’ case won. “We did not want to resign from the story, characters and dialogue,” Stachaszewski says. “It became something more than just another proc-gen horror set in a forest.” And so, to focus on telling a coherent story and ease the pressure on procedural generation they dropped mandatory permadeath, and a new battle began: somehow they had to re-engineer a sense of consequence to player death. 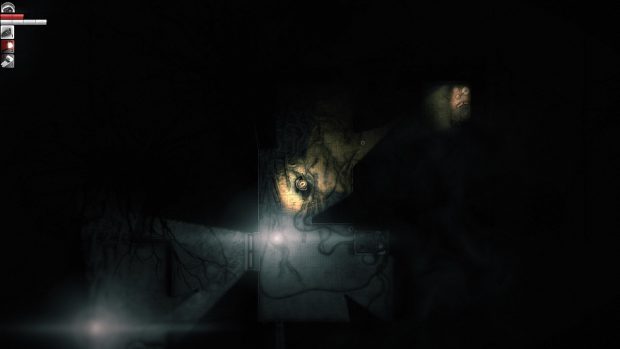 One solution was stripping players of skills and perks, thinking that it would also help encourage players to experiment with different builds after rebirth. “However, we decided that the loss of skills emphasises the least interesting fragments of the game, which is exploring the procedural forest in search of mushrooms,” says Kordas. Mushrooms provide Darkwood’s equivalent of experience points, designed to push players to explore the world and not place emphasis on defeating enemies. It also presented issues with game balance, since Acid Wizard would never know how strong a character would be in a given situation, and it led players who died often to gradually run out of experience to build their characters up, since resources in the game world aren’t replenished.

They explored more ideas: perhaps items could be reduced in strength somehow if the player died? Maybe they’d lose them entirely? Yet all of these variants caused similar problems, mostly because of Darkwood’s finite world of resources. There was the ‘saturation’ concept, where a bar would fill as the player performed significant actions, such as opening chests and discovering new locations. The bar would award the player with relative gains in reputation with traders, and it’d be reset or reduced on death. But the system was rejected for being too opaque. 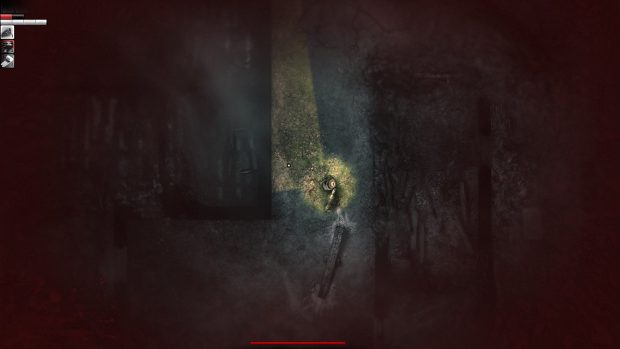 Then they started exploring an idea inspired by Don’t Starve in which the player would drop half their inventory where they died and respawn back in their hideout. It meant that items wouldn’t be removed from the world, but what happened if they were killed in their hideout at night? They’d simply wake up with all their gear helpfully left beside them. “So we invented, or rather I did, a terrible idea that the player would respawn in a random camp in the forest,” says Kordas. Every death came with the same consequence, but the day and night cycle became a problem: if they died late in the day, they might not have time to return home. So what if they automatically respawned in the morning? That led to more problems. ”What’s more, such a system was extremely confusing,” says Kordas. In a game made from complex interwoven systems like Darkwood, a good idea in one system can be a very bad one in another.

Finally, in spring 2014, they settled on a variant of the Don’t Starve solution. The player would wake in their hideout, since it offered players a chance to breathe after failure and re-kit themselves. If they’d died at night they wouldn’t enjoy trader reputation gains. And half their gear would be left where they died. What survived would be random, though items in their quick access bar were always kept, allowing a little control. That’s how the game shipped when it launched in Early Access in the summer of 2014, and how it remains today.

”We’re not happy with how this turned out, as it seriously hurts the atmosphere when the player realises that death is merely an inconvenience and not something to be truly dreaded,” says Stachaszewski.

Kordas agrees, adding that forcing players to spend in-game time on going back for their gear interferes with the day-night cycle and messes up the story’s pacing. “It’s also associated with traversing the same fragment of the procedurally generated forest, which unfortunately is not that interesting and rich with secrets, alleys and unique places.

“The consequences, even those theoretically unpleasant for the player, should always be interesting. If the result does not block further progress but, for example, opens another interesting storyline, frustration should not be a problem. In the case of death, it is good to come up with a mechanism that always relies on the most powerful aspects of the game. It seems to me that we have made the biggest mistake there. Death does not intensify the atmosphere of terror, it does not cause interesting consequences, it is usually associated with the investment of time, of which there is never enough in the game. This sometimes leads to frustration or, even worse, boredom.” 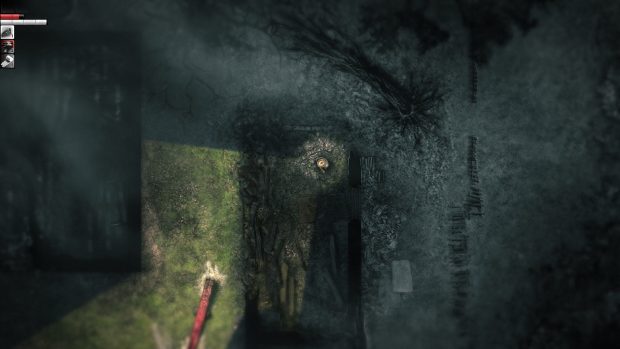 To shore these concerns up, Darkwood features an optional permadeath mode and another with a limited number of lives. “Implementation was not exactly well thought out and it felt that they are a little bit artificial,” says Kordas. But though they knew they were shipping with something they weren’t confident in, after five gruelling years in development (for the last 18 months, the three worked seven days a week), on its release they felt only relief. “The relief was so big that it almost completely overshadowed our fears about whether the game would sell, whether it would have good reviews, or if we could have done it much better,” says Kordas. “This feeling still lasts.”

It helped that Darkwood was received so well; its thick, strange, foreboding atmosphere betrays little of all the struggles that went into forging it. As such, while Kordas and Stachaszewski are somewhat self-flagellating about Darkwood’s deficiencies, they remain philosophical about whether they’d attempt to design them out, not least because they’d risk ruining what Darkwood is. “Perhaps there will be an opportunity to return to Darkwood and tinker in it,” says Kordas. “The question is whether we can find a solution that satisfies us all.”