I am not a religious person, but I must admit some phenomena can’t be explained in a rational way. Like the inconceivable vastness of space. Ghosts sightings. The Brexit. Or United Independent Entertainment’s decision to release Woodcutter Simulator 2011 on Steam in the year of our Lord 2019.

I discovered it by chance, a tweet by our dearly departed John Walker casually appearing on my timeline. And I realized that, as the former reviewer of Pure Farming 2018, it was my duty to play it. Destiny called. And now here I am, booting up the game, and readying myself to play… Holzfäller Simulator 2011? 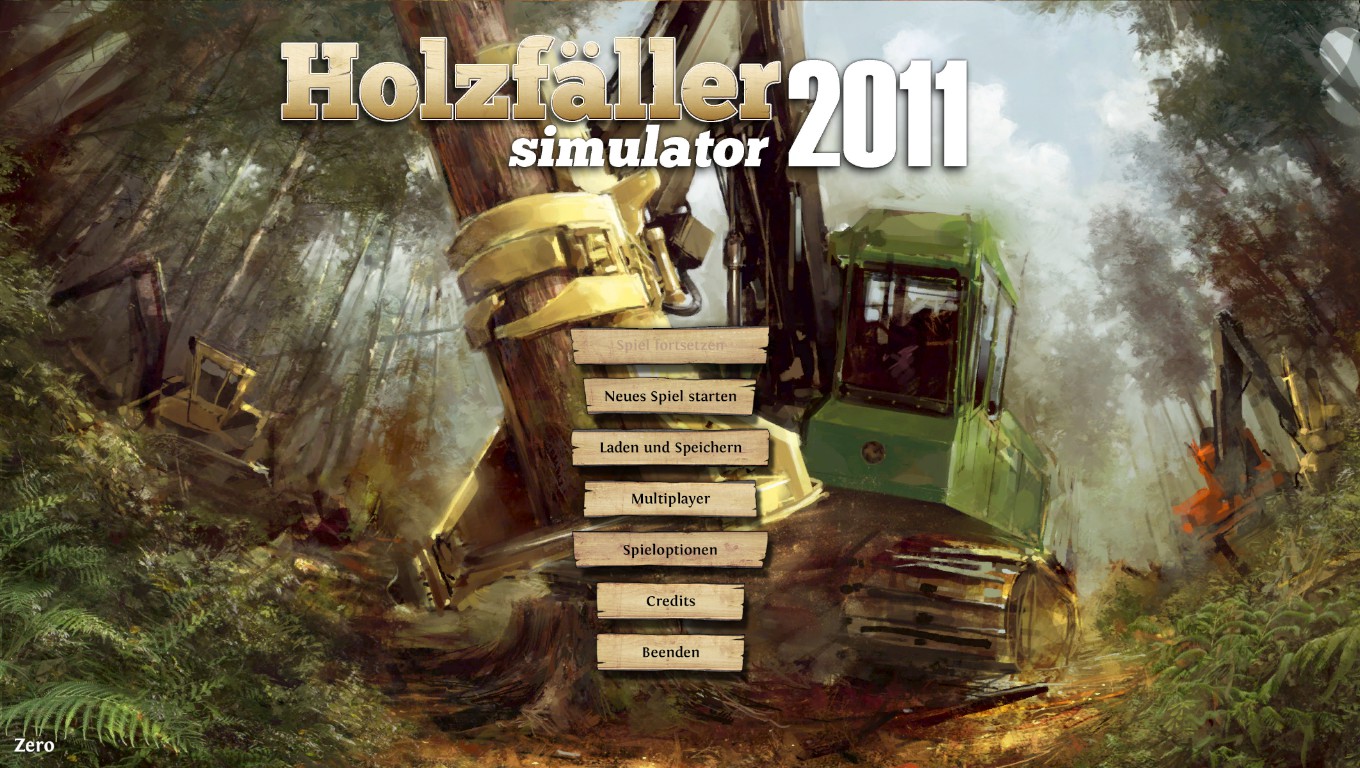 The game spontaneously decided to set its language to German. Fine. The Universe is probably trying to tell me something. Or perhaps it’s just mocking me for having neglected my German studies in middle school.

Armed with a translator on my phone, I start the tutorial mission. Bringe den Traktor in die richtige Position, the game tells me. I got this. My vehicle can be moved with WASD, the mouse controls the camera, and the trees I must cut are marked with a big red X. I take control of my Traktor and whroom to the nearest tree. Slowly. This game is so slow. I’d call it ‘contemplative’, but in truth there isn’t much to contemplate apart from trees. There’s not an animal in sight, no NPCs, no atmospheric effects. The dull music resembles that of a dentist's waiting room.

As I approach the tree, a green radar map appears in a corner of my screen. A part of me wonders if trees can fly. After playing How To Be A Tree, I am wary of trees. But this particular plant, for now, remains perfectly still. Waiting. I quickly learn that Leertaste means ‘space bar’ in German, and so I hit the key to pull out my saw. But something isn’t right. 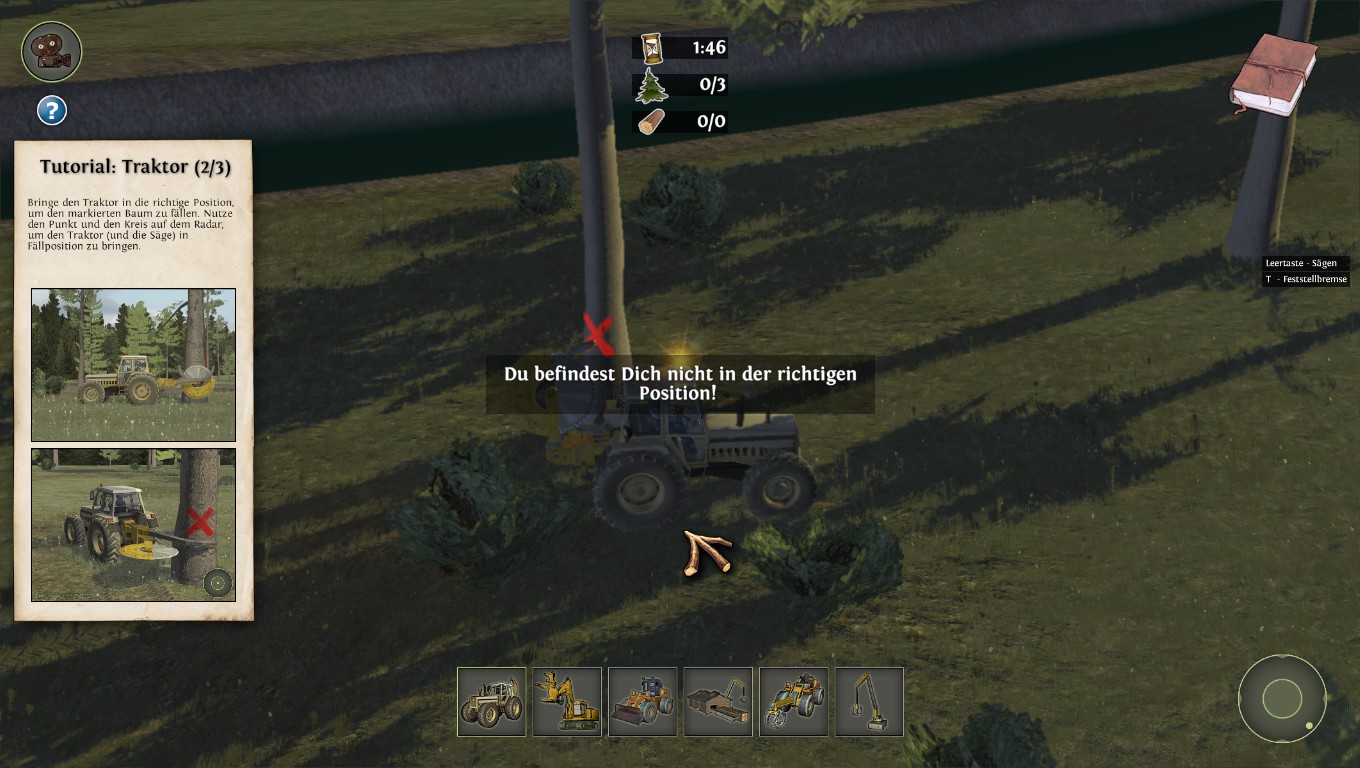 Du befindest Dich nicht in der richtigen Position. I am not in the right position to cut the tree, I guess. I circle the plant, trying to align my vehicle to the tree like in the tutorial picture. But the Traktor in the picture already has its saw extracted, while I can’t pull out mine before getting in the right position. To complicate things, my cutter also seems to dislike changing gears. Every time I attempt it, my machine stalls, grumbles and then randomly jolts backwards, crashing against the nearest obstacle. The radar’s movements also seem unrelated to my position, the dot remaining fixed on the radar’s border even when I am literally slamming my metallic bum against a trunk. I now finally realise why my driving friends always moan about parking. I also realise I should never be allowed to drive.

I head to the next tree and repeat the same dance, circling it like a predator. A very goofy predator that keeps headbutting its prey. The radar keeps staring at me like a malevolent eye. I think the radar and the tree are accomplices. Perhaps learning German isn’t my true destiny. I switch to English and repeat the tutorial, hoping to get some clarity. 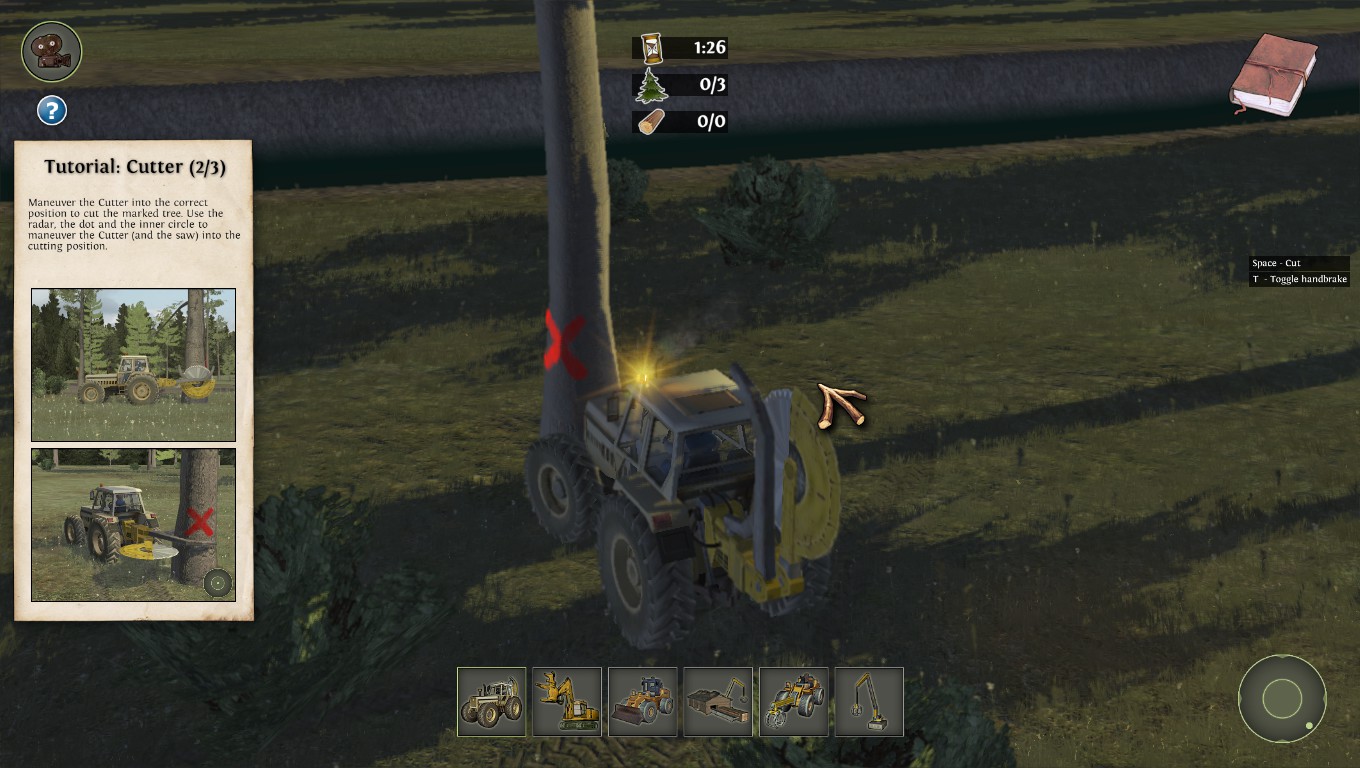 “Use the radar, the dot and the inner circle to manoeuvre the Cutter into the cutting position.” No shit, tutorial. But HOW? Why does the radar not move? Why is piloting this thing such a pain? Why, when I get stuck in a fence and press the button to reload the level, do the "are you sure" options appear as “yes” and “I’ll reconsider”, as if thinking very hard will allow my Traktor to magically get unstuck? If this is a spiritual challenge, I am failing it. My inner circle is broken. I don’t trust trees anymore.

There are other vehicles I can use, vehicles to move trunks and load them into trucks and ship them away. I can swap between them even during the tutorial. They’re all equally clunky, and each has a different control scheme - buttons to press in sequence to extend a metallic arm, lower it, open a fork, grab the wood. But without the raw materials, it’s all for naught. My fork sadly sways in the wind, silent guardian of a forest with no animals, no people, no hope. 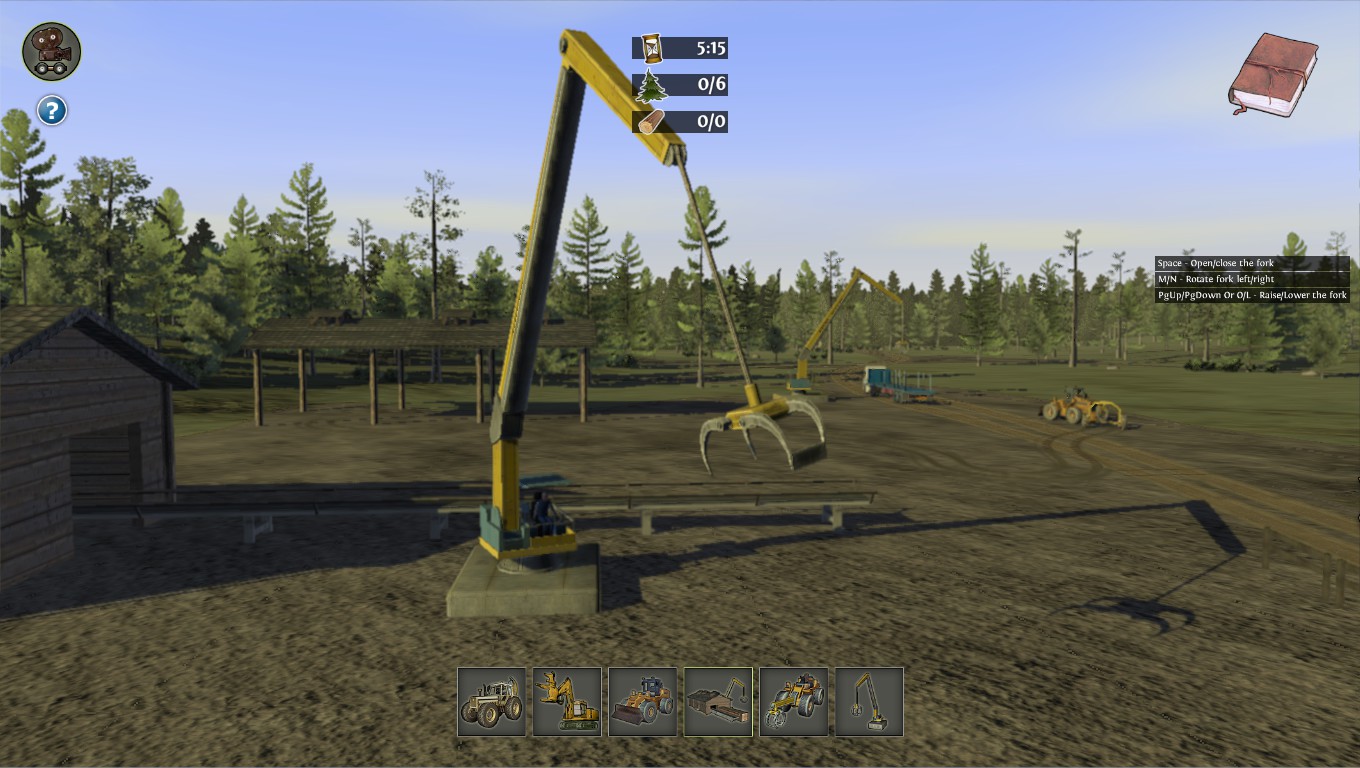 While fiddling with the different machines, I discover an alternative to get the job done: a weird vehicle I can use to literally hug trees to death. I am Italian, and therefore uniquely qualified in the art of hugging foreigners and making them die of discomfort. After half an hour of useless flailing around, I finally cut my first tree in Woodcutter Simulator 2011.

Feeling confident in my newfound skills, I load the first mission, aptly called The Italian Job. Destiny, I think, is smiling at me again. I get immediately teleported to the same map I explored in the tutorial, but with two differences: more trees to cut, and no tree-hugging machine. Fuck you, trees. You win. Your fearsome anti-radar powers have defeated me. You are free to live forever in this crappy forest, instead of being cut and used to… Replace the foundations of the city of Venice? 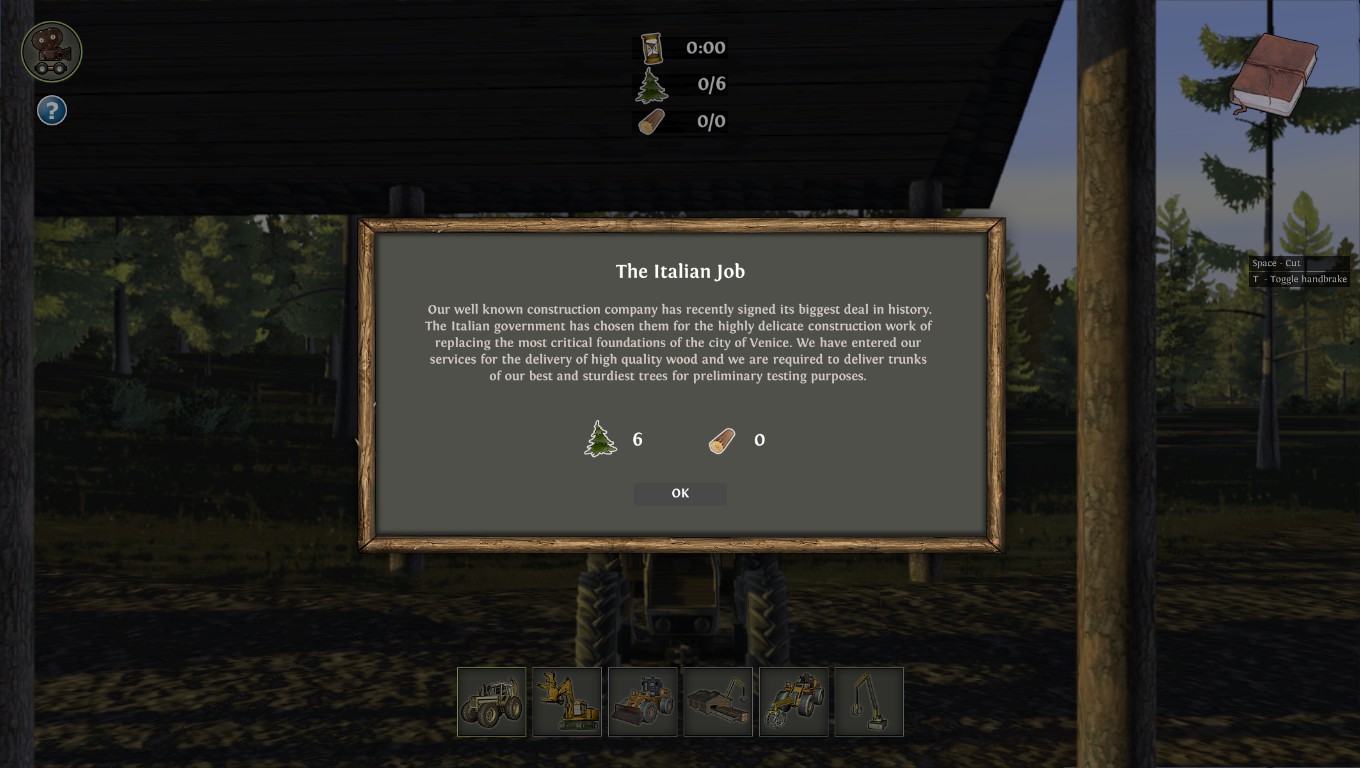 I was ready to call bullshit. I mean, have you ever been to Venice? It’s pretty wet. Using wood to build structures in such a wet place doesn’t sound like a bright idea. My dad is an engineer. I know how building houses works. I close the game and get ready for some fact-checking. If I can’t cut trees, I can at least OBJECTION them to death. (I’ve been playing Phoenix Wright lately. You should play Phoenix Wright instead of Woodcutter Simulator 2011.)

So, the city of Venice has been built in a lagoon. The terrain there has the consistency of pudding, but there’s a solid clay hidden under layers of mud. The first Venetians knew that, so they bought tree trunks from the mainland and plunged them in the muck. They pin-cushioned the whole area, covered this forest of toothpicks with solid planks, and a stratum of sturdy, impermeable limestone. Over all this, they built Venice. This means that Venice is, technically, the biggest stilt village ever! Look, I even found a documentary with cool 3D visuals of Venice’s foundations:

Thousand of years later, the giant toothpicks are still sustaining the city. The mud protected them from the erosion of water and from wood-eating bacteria. Instead of rotting, they started to calcify. 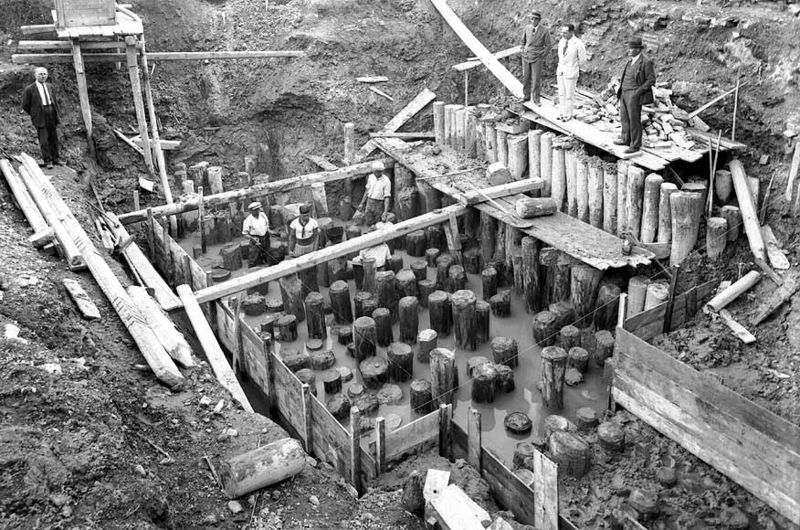 You may have read worrying reports about Venice sinking, and it’s true. It’s partly a natural process, and partly because of humans messing with the delicate equilibrium of the lagoon. If you want to learn more, this article on Spiegel does an excellent job of summarizing 1600 years of conflicts between men and mud. But according to the latest studies, Venice’s foundations are doing okay. Some parts need to get strengthened, but you can’t totally replace them with new wood, as Woodcutter Simulator 2011 suggests, because there is a whole city built on top of them. TAKE THAT, TREES.

So yes, Woodcutter Simulator 2011 - not a good game. But look at all the cool facts we learned today thanks to it. The universe works in mysterious ways.

Woodcutter Simulator 2011 is now available on Steam, for some reason.