I have been lied to.

The letter from my late grandfather which arrived at my desk spoke of freedom. It spoke of an alternative from the daily grind of the city life, of charming adventures, of hard work rewarded and of peace of mind.

An abandoned farm just for me! As I packed my luggage, I was already dreaming of quirky neighbours, magic sprites and turnips. So many turnips. But once I reached my destination, Pure Farming 2018's harsh truth was revealed to me: grandpa’s farm was riddled with debts. And The Bank wanted me to pay. 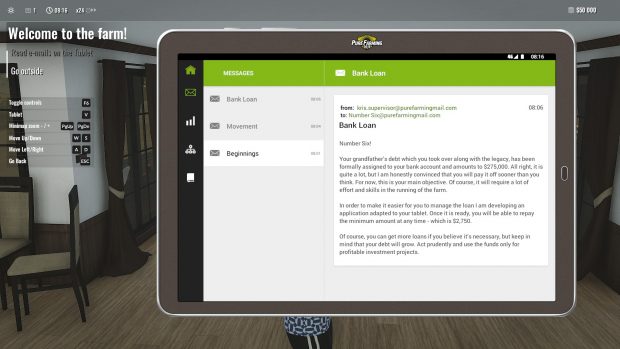 I have just unpacked my clothes and already mails are coming, clogging my tablet with an endless stream of instructions: walk out of the house, locate the granary, get in the tractor.

They sound somewhat sinister. I feel like I’m not being advised, but trained. Worryingly enough, the mail address from which the instructions are sent is the same as The Bank. 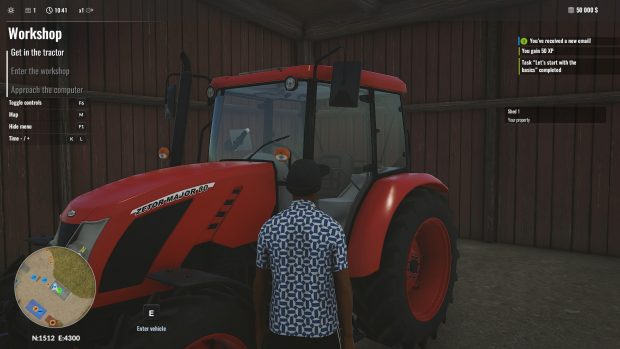 My overlords are benevolent, at least: instructions are simple and ever-accessible, and I never feel confused or lost. I now have a map full of icons, a to-do list, clear objectives and no strict deadlines. There’s a lot to do, but every button I have to press is clearly labelled.

As I stumble around, familiarizing myself with the farm, I find a bluish rock between a palisade. A new mail gleefully informs me that I just found a sapphire, and finding them all will reward me with a fabulous sum - enough to repay two-thirds of my debt.

Who put them there? And wouldn’t be more efficient to focus on sapphire hunting instead of farming?

The Bank thinks otherwise. The Bank wants me to sell wheat.

To reap the wheat, I have to attach a header to my tractor. It’s a fiddly operation: tractor and header need to be perfectly aligned first, but the smallest flick of the steering wheel is enough to make my vehicle bounce. I can’t shake the feeling of being inside an amusement park, every detail realistic and yet slightly wrong: rocks made of foam, trees with leaves of cloth, and a bouncy, fake terrain made of rubber. Only the tractor I’m driving feels real enough, the detailed mechanical parts glinting in the sunlight. 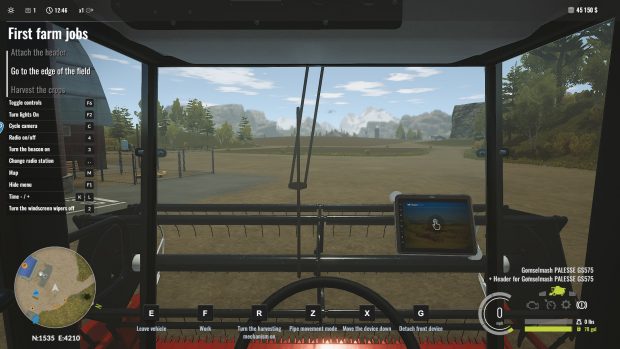 I reach the field and get to work. I have to press some buttons in the right order first, to move the header in the right position and turn it on.

As the moving parts clank and stutter, I feel a little pride surge in my chest. All I did was press some buttons in the right sequence, but the process looks complicated. I approach the field in high spirits.

Patience is the first trait of a Good Farmer, and one I have yet to acquire: the container takes forever to fill, and I find the bouncy vehicle is difficult to manoeuvre. I wanted to cut the wheat in an orderly way, but every U-turn brings me on the opposite side of the field.

I am not a Good Farmer. I scar the field with a jumble of messed cuts, wheat falling everywhere.

The idea of writing HELP on the field crosses my mind. An eyeblink later, I receive a new mail:

Drones. They are building drones to spy on me. And they admit it so casually, because my situation is already so painfully clear.

I have to sell the wheat. After more tedious fiddling with bouncy vehicles that have to be aligned, I manage to put the crops in a trailer and drive towards the selling point.

The vehicle’s radio keeps me company during the journey. The music is cheery, yet rings hollow to my ears. 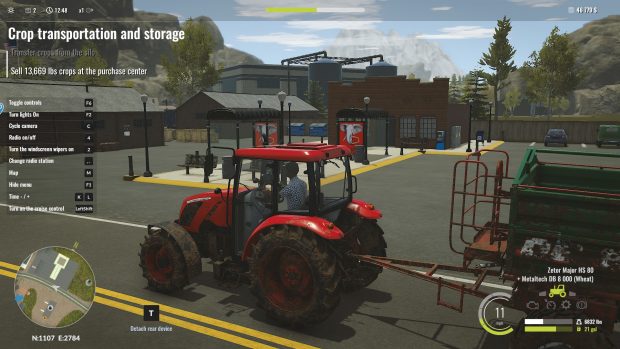 The Bank orders me to drive to a shop and acquire new farming equipment.

As I travel the countryside, I idly wonder if I'll ever be allowed to buy animals. A part of me wishes to fill the empty barns with chickens and pigs; the other part already dreads the prospect of a trauma. Best to stay alone than to find yourself surrounded by artificial animals, life-sized figurines out of a nativity scene.

Do androids dream of electric sheep? And if so, am I to become their herder?

As distraction creeps in, I lose sight of the track and take a wrong turn on the road. Behind a wall of rocks, I come face to face with the limits of my new reality. 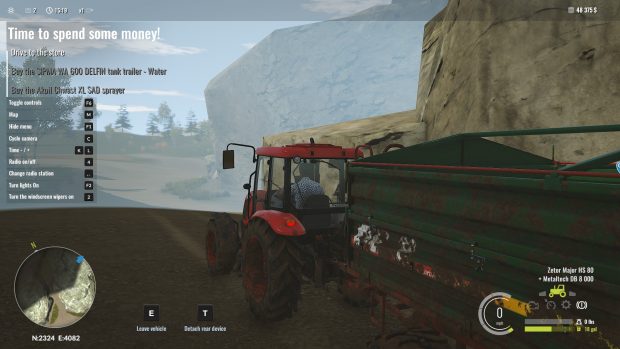 A force field. I am not even sure The Bank is run by humans, at this point.

Reaching the place marked on my map, I am immediately greeted with a wonderful vision: people! I descend among them, but the crowd parts like the Red Sea. Any attempt at socialization is met by a blank stare.

Perhaps they can’t talk to me, the Prisoner Of The Bank. Perhaps I am outside society, now, not a human anymore but a number.

Perhaps they are simply unable to speak. 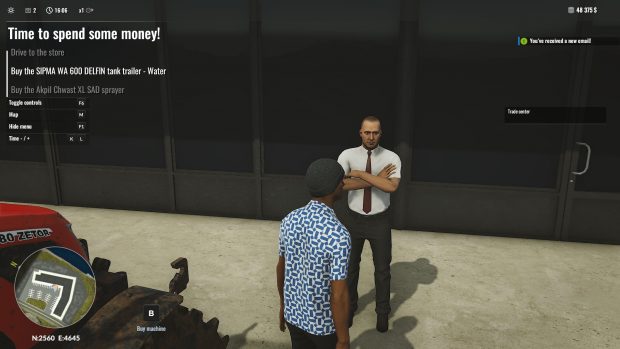 He's a machine. They’re all machines. That’s why the cars I’ve seen so far are able to cross the blue barrier: it only blocks organic matter.
I wonder if they can talk among themselves; if they have rich conversation in robotic frequencies I can't hear.

The Bank informs me I can buy stuff directly from my tablet from now on, instead of having to interact with the robots. Online purchases will cost me more, though, increasing my debt.

My next task is to talk with another farmer. I was already prepared to grimace at a new plastic smile, but the person I meet seems to be made of flesh and bones. Not another machine, but someone worse: a jailer.

An "employee from a different state", of course. 21st-century slavery. I am given a strict time limit, and a new task: spray fertilizer on this guy’s orchard. I use the machinery I just bought to complete this task, but the process doesn't feel too different from my first farming experiences: press a combination of buttons to turn the machine on, reach the spot and then simply drive up and down.

Is this going to be my life now?

There is a certain appeal to it which I can't deny. It’s nice to follow instructions, to let others decide what you have to do. Do the thing, watch numbers grow.

I am a cog, but I am also allowed a certain freedom in the way I can fulfill my activities: I can guide different vehicles, decide when and how to reach a destination. I can even put my songs on the radio! Such a nice touch.

I am controlled, but not censored. And one day, I am sure, the endless stream of mails will stop. I will be free to manage the farm however I want - even if it won’t be real freedom, because my mind will be fully conditioned at that point.

Trained to act as The Bank desires. Trained to play a game made of small, simple tasks and of mindless, numb satisfaction.

Would it really be that bad?

I decided to escape.

Under the night’s cloak, I slip away. Is The Bank still watching me, even on this moonless night?

I don’t know. I don't care. I run to the edge of the farm, where the railway tracks cross a bridge to enter a tunnel on the opposite part of the river. 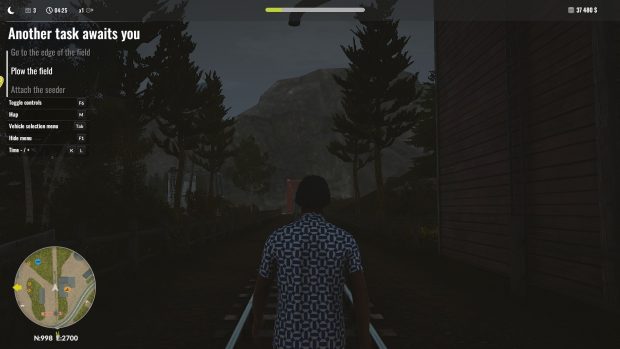 I fall into the river, looking for a break in the barrier - or at least, for an opportunity to drown. But there is no way to circle around the force shield. I extend a hand toward the unreachable shore. The land mocks me with its existence.

Another task awaits you, sings The Bank. My eyes fill with tears. 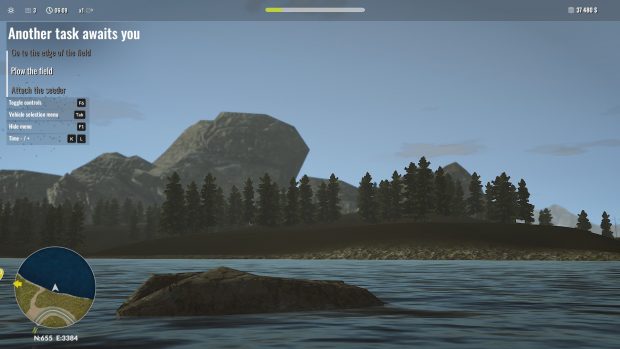