Since 1984’s Elite, and in sci-fi before it, space has promised careers of freedom. Work for yourself, work only when you want to, make your own adventures. For better and for ill, space is sci-fi’s wild west, a lawless frontier to explore and find independence. Our actual future isn't as glamorous, even if those frontier promises are the same ones made by the gig economy. Endless startups, sites and apps have promised our generation that we’ll never need to work a job we don’t want to. We’re all gonna be renaissance people working freelance -- driving people around, writing editorials, getting our illustrations in magazines, and making music for wealthy patrons.

They don’t tell you that freelancing is mostly tedium. There’s a lot of secretarial work, and complicated taxes. And all for a few extra bucks of spending money. And for my money (the few extra bucks of it I’ve made), it’s unsurprising that our games are reflecting our new existence back at us. Some, capture the grind perfectly, like alien sci-fi worlds Desert Child and Diaries Of A Spaceport Janitor. Those dreams of freedom we fell for shown, instead, as the reality of being a cog in the capitalist machine, and how it jars compared the glory that was originally promised. 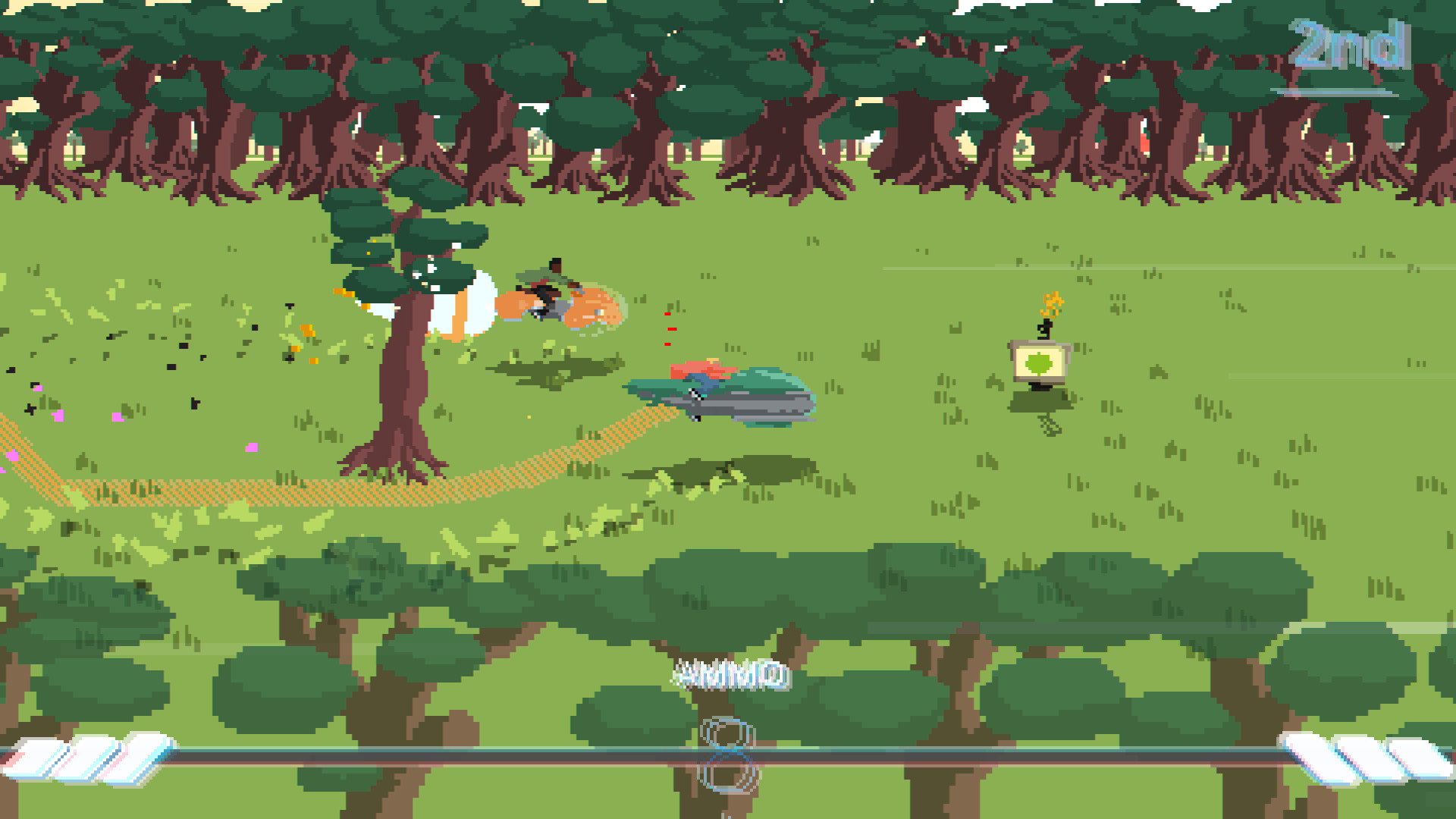 Of the two, Desert Child is the more optimistic, but through it we see those promises of the gig economy hit reality. It begins with a life of routine, running races, selling bike parts, and eating expensive ramen that doesn’t fill you up. This changes when one of your race partners suggests you try for the big time, and challenge the Grand Prix. So it’s off to Mars to find glory. There’s one problem: the entrance free to the Grand Prix is gonna cost you another $10,000. And so the daily grind begins once again, finding work wherever you can.

You’ll soon find most options untenable. Cowboy work rounding up kangaroos (definitely not native to Mars) comes with a penalty for each one you let escape, and you’re more likely to end up owing money than making it. Bounty hunting requires serious gear to stand a chance, so too often your ambitions of bringing in criminals brings you a big repair bill instead. So, that’s how I ended up delivering pizzas.

Delivering pizzas is the most consistent way to make money on Mars, even if it comes with a stressful tip-based pay rate. The same pizza shop is also the only place to get a decent meal in this food desert, with other options limited to stomach churning energy supplements, questionable fish, and convenience store food that fills you up less the more you eat of it. And so you end up paying $80 bucks between jobs for a margherita pizza and wine, just to keep yourself fed. That’s twice the base pay for a delivery job. On top of this are costs for new bike parts, repairs, and other miscellaneous expenses that might set you back. I hope you make good tips. 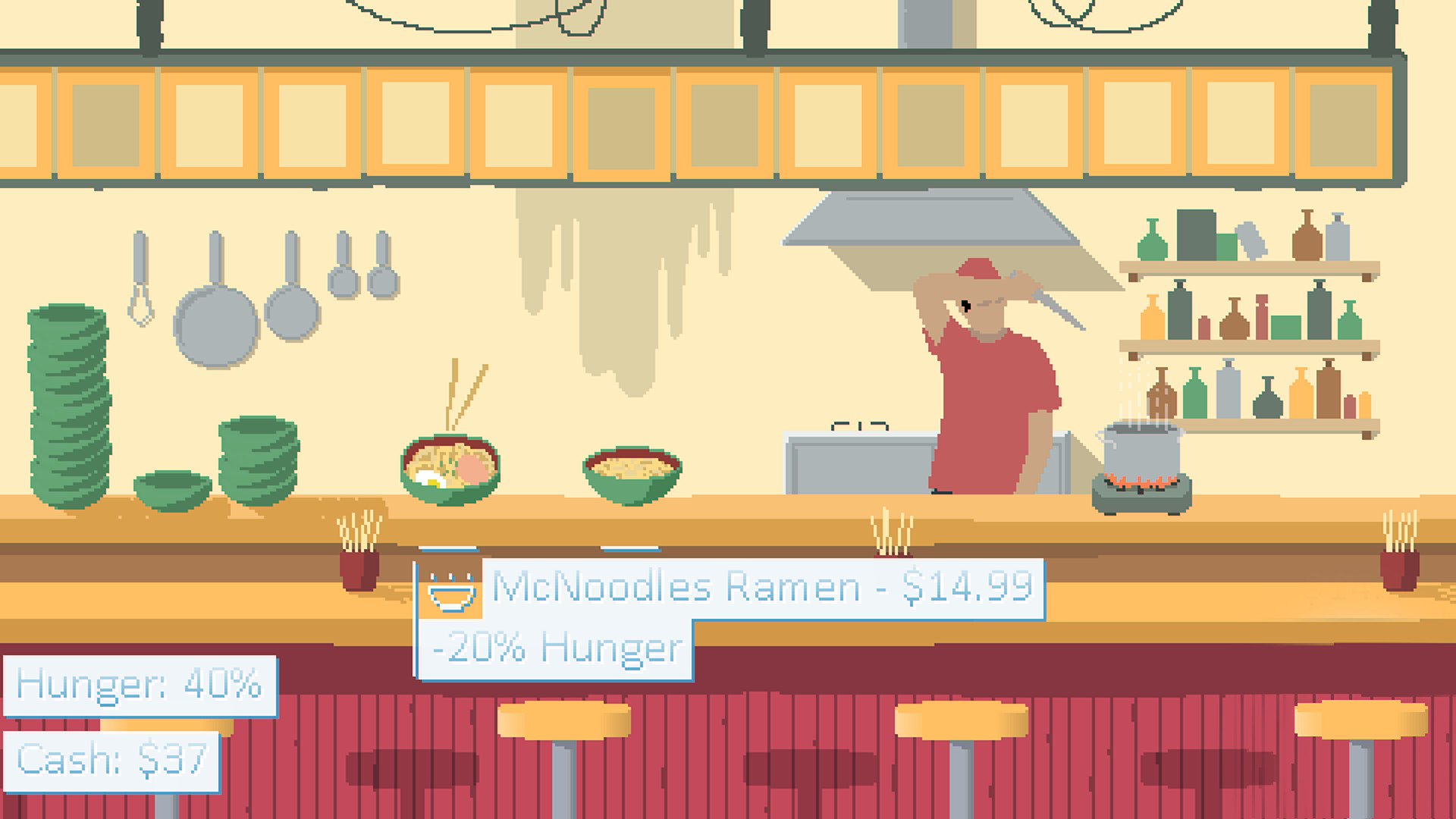 Still, pizza delivery is probably a better outcome than where you end up in Diaries Of A Spaceport Janitor. Starting at bustling spaceport in search of adventure, you instead find and eat something weird that sends you tripping into a dungeon (we’ve all been there), where you’re cursed. You wake up the next day in a shoddy apartment, being followed by a floating skull. From there you’re stuck picking up trash to try to afford your daily necessities, break the curse, and find a way out of the spaceport. So the best you can hope for is to get back to where you started in the first place.

While Desert Child reflects the broken promise of the gig economy, Diaries reminds us of the bleaker truth: that not all of us are blessed with the privilege of making it even that far. Some of us get to buy the big sword and kill God, but most of us only just get by. Reminders of your low class status are everywhere in Diaries. Menus for restaurants sport prices higher than any amount your bank account has ever seen, and vendors constantly hawk high end adventurer gear that you can’t afford, and wouldn’t be able to use even if you could. 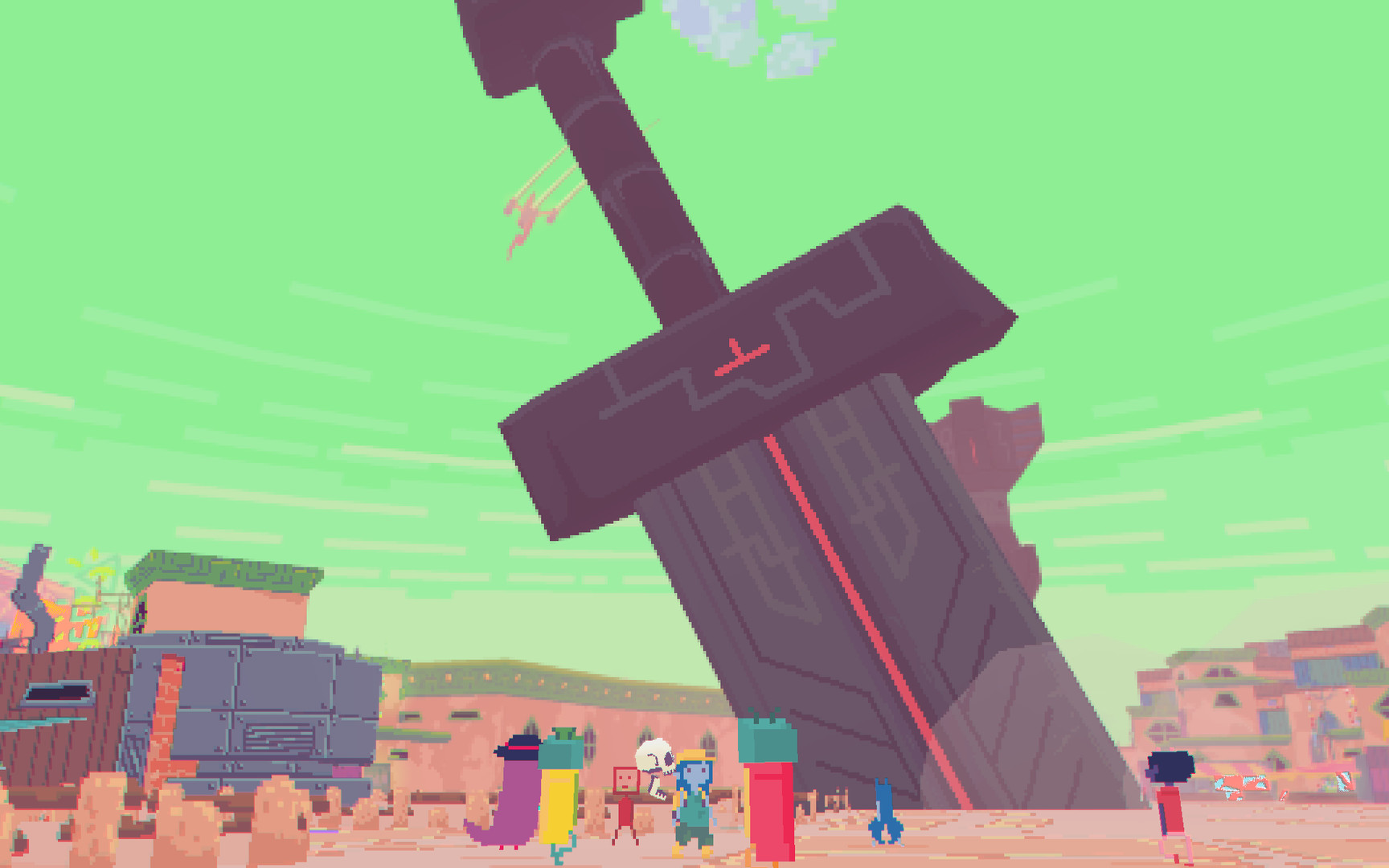 At some point you’ll begin to covet the lifestyle of the others around you, while burning the trash they leave behind for a few cents. Maybe one day you’ll be able to buy some of those grilled foods. Maybe. But until then it’s nothing but daily nutrition shakes. You might even find yourself getting a bit superstitious. Diaries has a LUCK stat, and you watch it fluctuate, praying to whichever god will keep you in their favour, and avoiding spirals on the sidewalk because a tooltip told you they’re bad luck. Are they? Does it even matter? It’s a dire situation, and it only gets worse when the dysphoria begins to hit, requiring you to hit up the gender drug machines to keep seeing straight. In Diaries you’re kept in poverty in order to just feel bare minimum fine.

If you do manage to get the cash for the Grand Prix it turns out to be an underwhelming finale, not at all the celebration you were promised. Both games dig into the glamourous ideas that capitalism has us aspire to. Not all of us can make it, and sometimes the peaks we climb to don’t feel as triumphant when we reach the top. Not to get too navel gazey, but even the money I make off writing this is going to go towards affording more games, so I can keep writing. 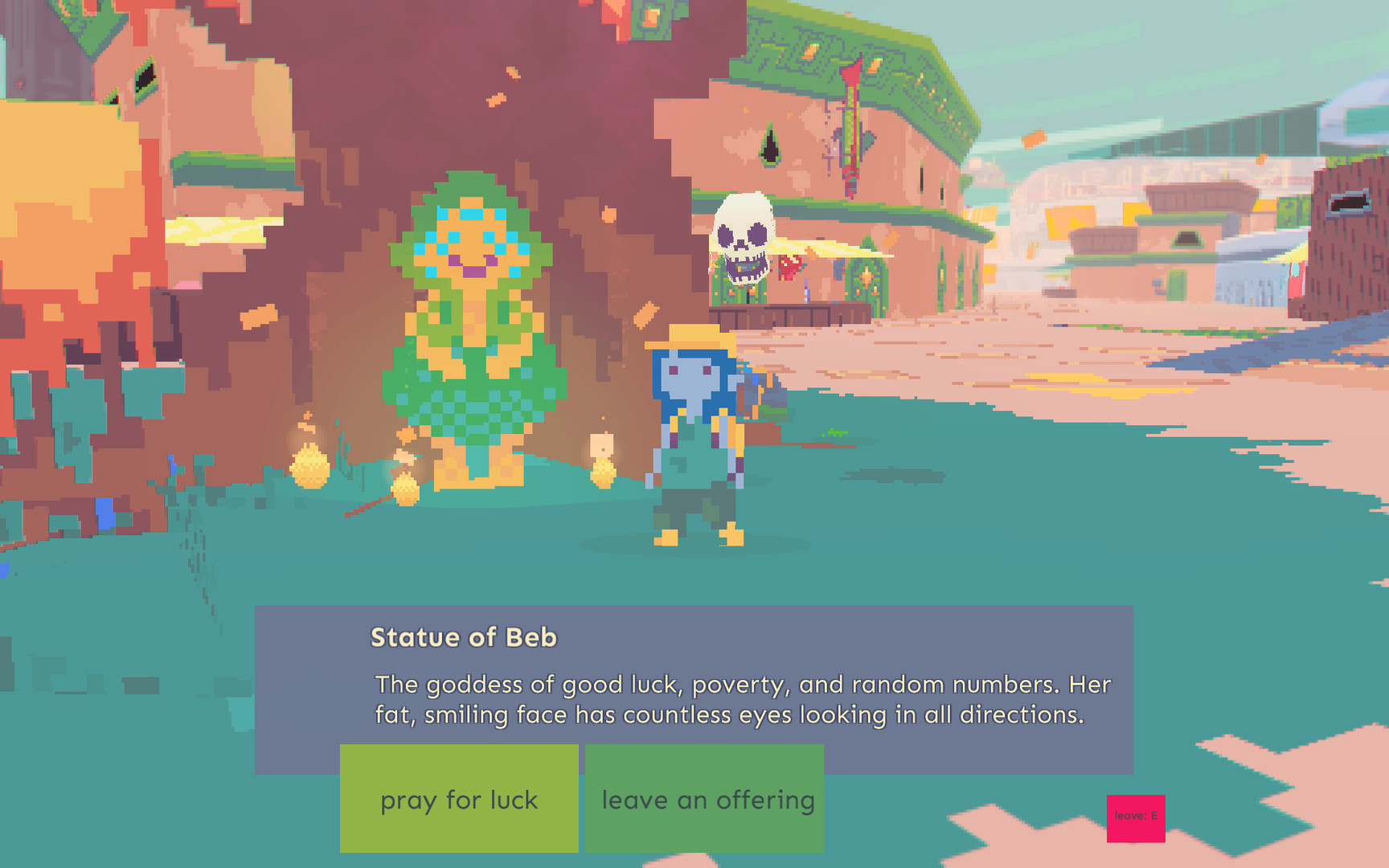 That makes all of this sound a bit Sisyphean, but in between the grind are genuine, wonderful moments that keep you motivated. Desert Child’s Mars is a surprisingly vibrant place, with beachside eateries and colorful marketplaces. People do their shopping, fish in the martian sea, and tune up their mechs. The sheer diversity you come across while people watching is a joy in itself. All set to a rotation of quality tunes, including the catchiest pizza delivery song made.

Diaries of a Spaceport Janitor has those same vibrant markets, but stranger, more alien, and grander. The markers of grand adventures beyond your reach are what rouse jealousy, but you can’t help but stare in awe at the ancient temples, or the building sized sword thrust into the center of the plaza. Passing these landmarks, or hearing a street band play as you wander through, makes picking up trash a little more bearable.

And you know, that’s what keeps me coming back. There’s always some small detail I missed, or another person writing their own story. The routine might not change, but the scenery is never exactly the same. Each game takes on the capitalist promises of success, looks beyond the romantic ideals to the tedious, daily work it takes. But if you find enough genuine moments, you can keep going.