The power fantasy of exploring new worlds or meeting strange alien races (and then shooting at both of those things) is the kind of thing that big-budget games tend to focus on. As far as humour is concerned, they’re at best ‘plus comedy’ experiences that deliver on their key points but also have some funny quips along the way. You’re never asked to participate in the humour, and if the jokes don’t land then there’s little you as the player can do about it. So why not equip the player with the systems to write their own jokes and tell their own stories? And how do you foster humour creation in games that don’t already have a pun-based name for every item? I spoke to the developers of four such games to find out how they utilise this approach in order to enable players to create their own fun.

One thing that became evident through the interviews was that each and every system available to the player has to be airtight if they are to get the most out of the experience. A poorly-implemented system can cause you to lose investment in the same way that a poorly delivered punchline might. Each developer wanted to encourage experimentation through their game’s systems in their own way. But which comes first; the design of the systems or the desire to create humour?

Patrik Lasota, lead designer on Helldivers, saw the development of his game’s humour as a logical progression following the creation of the systems. Lasota explains that whilst the game was primarily designed to create moments of tension (internally referred to as “the tingle in the ass”), once the major systems were in place, an air of slapstick emerged. For Johan Pilestedt, CEO of Arrowhead and game director of Helldivers, the humour comes from the sudden deflation of this build-up of tension. Pilestedt says that whilst on paper Helldivers is a game that seems unbalanced in favour of the player, the introduction of a couple of stress-inducing mechanics, and the need to coordinate a little means everything can break down at a moment’s notice. The dark humour of the game then arises from a combination of player hubris and preconceived notions about how games should play. His approach demonstrates what makes this kind of user-generated humour unique. The player’s preconceptions of how well their team might do and then the deconstruction of that through the game’s systems leads to these ridiculous moments, something that would never happen in a more traditionally comedic game like Brutal Legend. 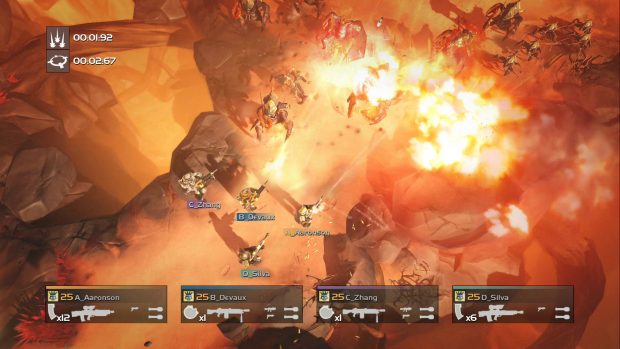 Francesco Antolini, on the other hand, knew from the start exactly what he wanted his game, Just Cause 3, to deliver. Antolini tells me that what he aims for in all his games is a “we-give-you-tools” approach that fosters accessibility and creativity above all else. Much like Lasota and Pilestedt, however, Antolini also makes it clear that Just Cause 3’s systems were not designed with comedy as their main priority. His aim was to foster experimentation, and the natural pleasure that comes with this; “Humour and comedy are just a happy consequence.” He explains that because the game’s systems are all based on a simulation of actual physics, the creative element of the game is easy to pick up, and invites players to experiment or as he puts it, “to fuck around.” It’s here we see the primary difference between systems-led games like Just Cause 3 and straight comedy games. It’s an alteration in the dynamic between player and creator with the creator laying out a system that the player can then work within to create comedy. In some ways this mirrors the difference between pre-written scripted comedy and free-form improvised comedy scenarios played out within specific systems.

Introducing these systems to players and letting them fuck around is one thing, but ensuring that your game maintains a consistent difficulty and remains fun for the player can be a constant balancing act. Antolini argues that also providing a more linear guided experience to players is important, whereas Lasota, on the other hand feels that the gradual increase in difficulty in more linear games actually makes this balance even harder. Lasota worries that the focus on success in a linear progression would make the moments of comedy, such as death by friendly fire, start to lose their comedic value.

This unpredictable mixing of a game’s systems, or “ingredients” as Far Cry 5’s lead designer Clark Davies describes them, can lead to further challenges in adding scripted elements. Davies describes how each new system they add has to work on some level with all of the others, so there’s no right or wrong way to play the game. He explains that this makes it “definitely a challenge” to make sure players get a positive end result no matter how they play. Antolini tells me of a similar challenge he faced when designing Just Cause 3; of creating a believable world when anything and anybody can be exploded, retracted, boosted, attached, shot, run over… well I think you get the idea. Antolini explains to me that they have to design to maintain “fragility” when so many unexpected things can happen at any moment and derail an intended moment of the game. His trick is to allow for alternate outcomes, and to give the player as much leniency as possible without breaking the overall narrative or meaning of that particular moment. 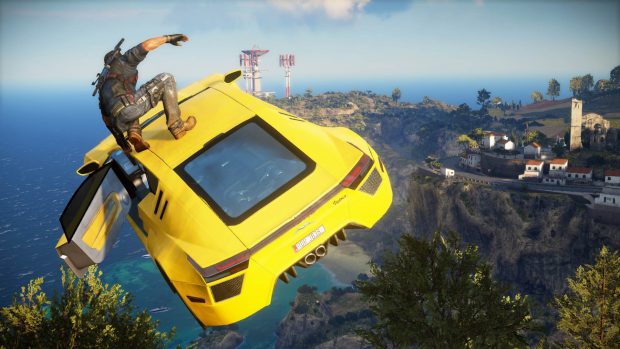 When these unexpected things do occur and anecdotes are formed, players don’t have to take to a stage or bend a friend’s ear over a drink to recount them. Sharing clips from your favourite games through the veins of social media has become commonplace. A clip can be shared across multiple platforms hundreds of thousands of times in a single day, and prominent influencers and streamers can have significant effects on a game’s popularity. These means of sharing content add to the accessibility of this form of comedy creation rather than detracting from it. Davies describes how it used to be the “watercooler effect” that let these stories be shared, whereas now social media is the modern equivalent; Antolini says “I like to think that we now have YouTubers who are actually going to pick up Just Cause 3 with the goal of creating some amazing footage, rather than to beat the game.” Lasota and Pilestedt agree that explicitly aiming to give players content ripe for sharing never drove Helldivers’ development, but Lastota always wanted to make sure that players would have amazing anecdotes, or “war stories”, to show each other. Lasota in particular tells me that he always wants people to come away from his games with unbelievable stories to tell, and that he deliberately designs mechanics that help to create them.

So, if the creations of these developers are enabling others to share their own hilarious moments, do they consider themselves comedians? Davies comes back to the cooking metaphor, describing himself as more of a chef balancing ingredients for a perfectly flavoured dish than a comedian. Even though the game’s mechanics are so integral to Helldivers’ comedy, Lasota is modest and describes himself as more of a comedy “buff” than anything else. Pilestedt also refuses the label and says that he simply, and slightly sadistically, enjoys toying with the emotions of the players that play the games I make. Antolini’s answer might sum it up best though, and demonstrates the thinking such a design philosophy can bring: “It’s you, the player, who I’d consider a comedian, not me. We’re just giving you pencils and a canvas; you do all the drawing.”