If you click on a link and make a purchase we may receive a small commission. Read our editorial policy.
Can’t Stop Playing is our monthly celebration of a game we're loving. This time, we are transfixed by the many facets of the ambitious, dense and extraordinary cop RPG Disco Elysium. Watch out for more articles on it throughout the month.
Watch on YouTube

The first proper obstacle in amnesiac police RPG Disco Elysium, if you don’t count your ceiling fan, is a small child who has taken a lot of speed. He stands outside your hotel, chucking stones at your corpse. Your case’s corpse. The one you need to investigate. This won’t do.

To fix the situation, you need to get inside Cuno’s mind. You need to stare into the abyss that is a twelve-year-old drug addict and somehow emerge with answers. Cuno will not make this easy.

In fairness, Cuno clearly isn't in a good place. He is "riding the lightning" in a terrible neighbourhood where the cops have abandoned both responsibility and a corpse, leaving it to hang for seven days straight. As you begin to talk, the depth of Cuno's suffering comes to light. Cuno's mother isn't in the picture, leaving only a drug-addled father to take care of him. The father, you can fathom, does not take this dictum as you might hope a parent would.

Merely by opening a dialogue, you have thrust yourself into an winnable contest with the damaged. Cuno seeks dominance because that's all he knows, attempting to draw blood from every corpse-directed stone. That's what this is. Displacement aggression, burrowed into every fibre of his being. The problem's compounded by his companion, another wretch in even direr straits called Cunoesse, who is egging Cuno on. They will both loudly accuse you of paedophilia.

At this point, you might need to punch Cuno in the face. 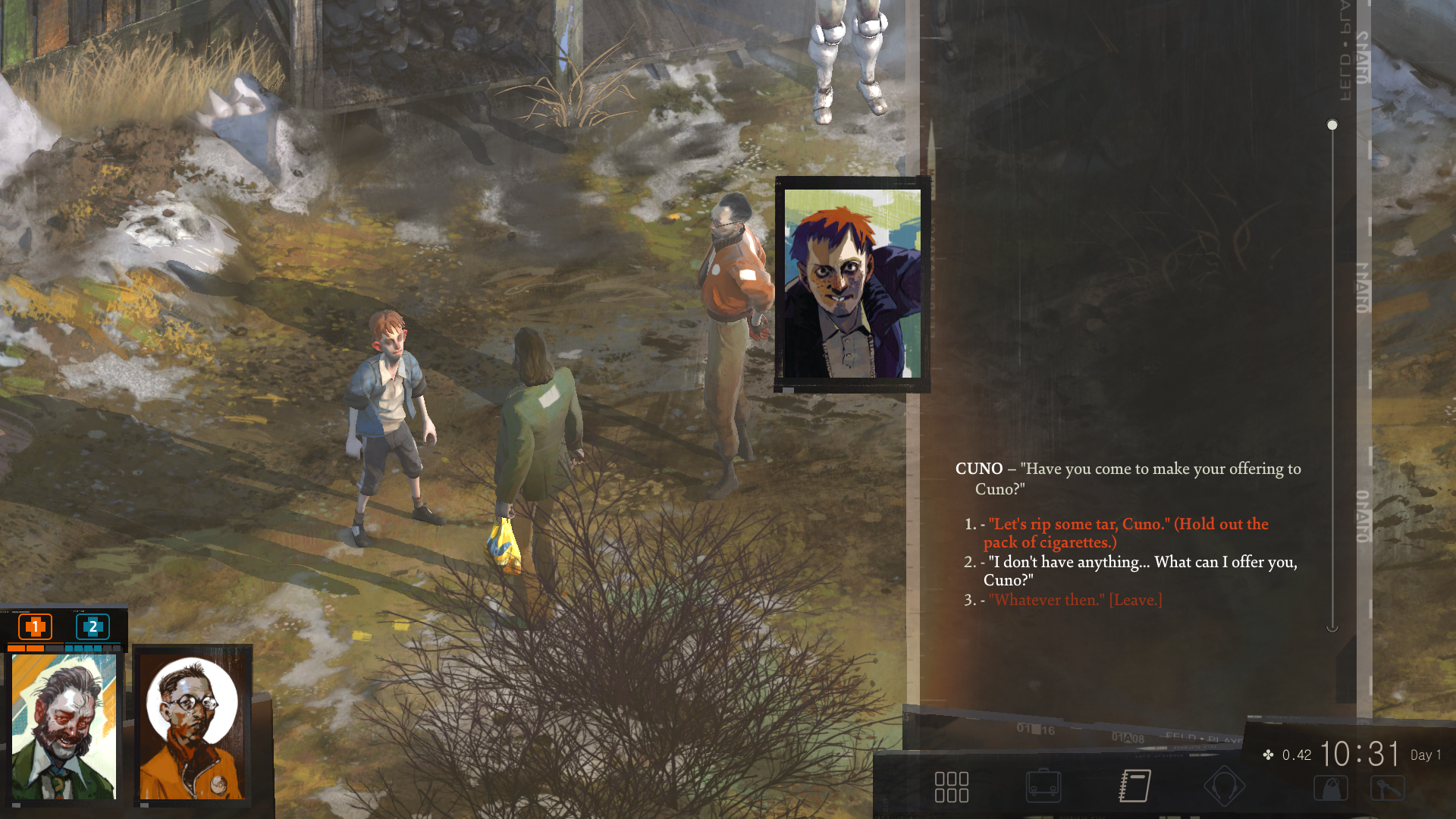 You will need to pass a skill check to do so. There is a vest by some cars to the south that will help, if you're not the physical type. Although it is quite easy to punch a prepubescent boy.

If you fail to punch him, you will wind up sprawled on the floor and be forced to make amends by buying him cigarettes. You're incredibly poor at the start of the game, so your best bet is to find a plastic bag and scour the streets for bottles, which you can then trade in for cash at a nearby shop.

This will not earn Cuno's respect. You must remember that you have just tried and failed to punch someone despite the fact that they are a pathetic and scrawny child, and this has worked in Cuno's favour. All the cigarettes do is put you back on speaking terms.

There is no good way to deal with Cuno. I think that might be the point.