The thing I love most about the HP Omen Mindframe is its name. Say it with me. MINDFRAME. It's so ridiculous it's actually come full circle into pure, unbridled brilliance, and I doubt there will be another headset in the history of gaming headsets that even comes close to matching its mad, bonkers moniker.

The HP Omen Mindframe's name isn't the only thing that sets this headset apart, though. Through some sort of thermoelectric magic, each earcup also has their own dedicated ear cooler. That's right. If you're the type of person who regularly finds their ears getting a bit sweaty after playing games all afternoon, the Mindframe will halt those salty droplets in their tracks and keep your ears nice and chilly. And surprisingly, it really does work.

It's quite a cumbersome headset overall, seemingly bigger and bulkier than much of its non-ear-cooling competition, but a large part of that is down to its suspension headband rather than the size of its earcups. It's a similar idea to the Steelseries Arctis 7, but whereas the Arctis 7 uses a thin, elastic, material-based design, the Mindframe goes all in with a second faux-leather headband that springs up and down to provide some adjustment. This ends up making it feel more substantial than the Arctis, and therefore less travel-friendly as a result.

Not that you're going to be out and about much with the Mindframe, as not only is this a USB headset, making it ill-suited to anything but your PC or laptop, but its RGB LEDs around the Omen logo and large, fold-down microphone also have a high probability of making you look a tad silly unless you're the most self-assured, on-the-go laptop-er. 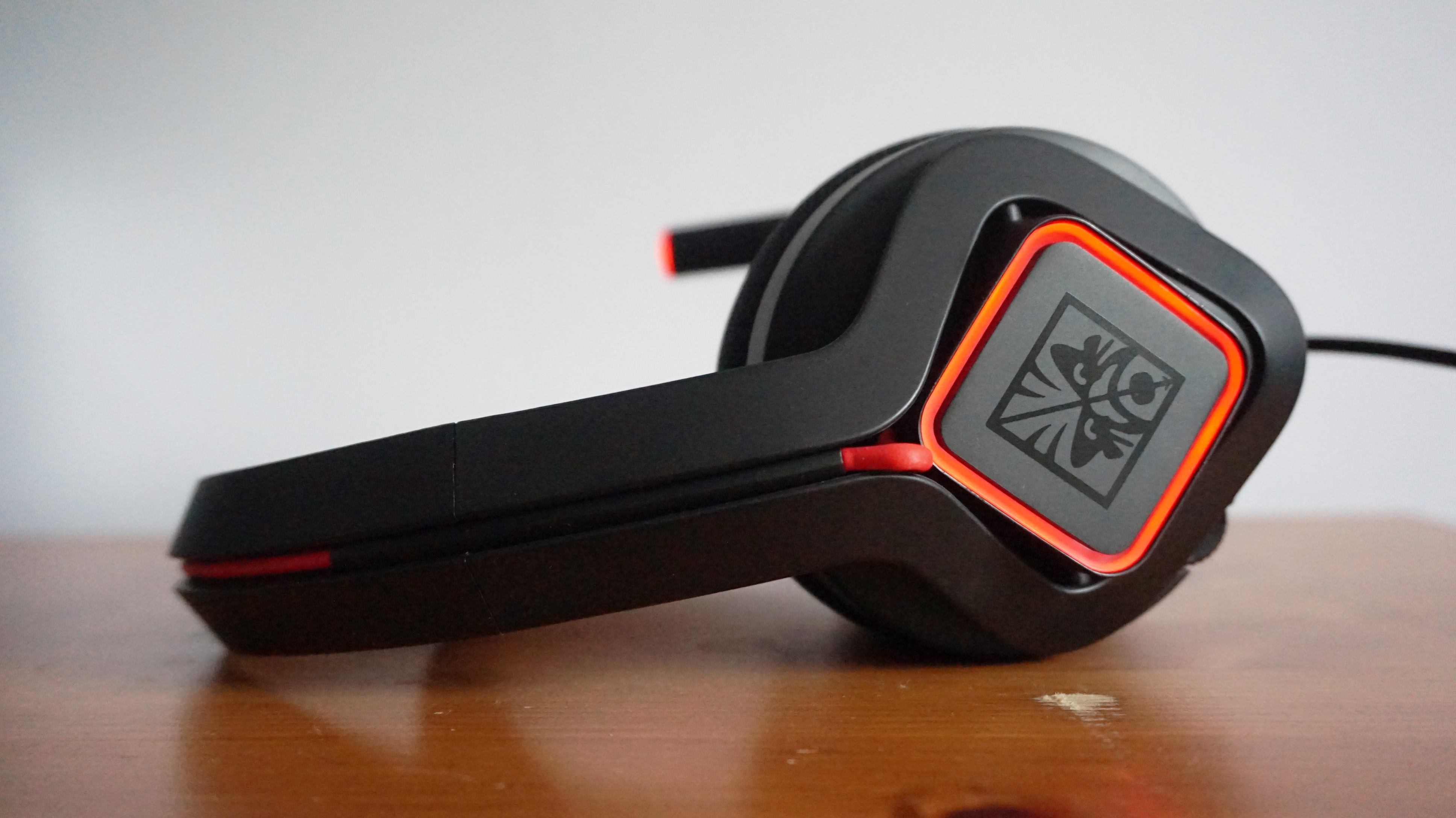 Now, I'm normally the first person to advocate the use of suspension headbands. As someone who regularly suffers from headset pinching after 30-odd minutes of use, suspension designs are always far more comfortable and easier to wear than those that rely on excessive cushioning and reams of memory foam to stop their heavy frames from pressing down on your old noggin.

The Mindframe, however, simply doesn't do quite enough for those with slightly smaller heads like myself. This is problematic, for while the headband itself was quite comfy for the most part, the earcups had a bad habit of hanging just a bit too low against my jawline, making it feel like my mouth was in some kind of vice. I suspect those with larger craniums probably won't have this problem, but it's disappointing nonetheless, as I was hoping the Mindframe was going to be just as pleasant to wear as the Arctis 7. Alas, it seems it was not to be.

Still, in terms of audio quality, the HP Omen Mindframe is pretty decent. Its virtual 7.1 surround sound (which is a permanent fixture, by the way, as there's no way to turn it into a regular stereo headset using HP's Omen Command Centre app) provided an excellent sense of space when I booted up Doom, for example, and all the environmental detail rang through loud and clear, from the flickering flames of the UAC's burning wreckage to the screeches and shrieks of the resident demon population. The bass wasn't too overpowering when the game's pumping battle music kicked in, either, and the blasts of my Super Shotgun still sounded pleasingly weighty as it ripped through the squelching flesh of my prey. 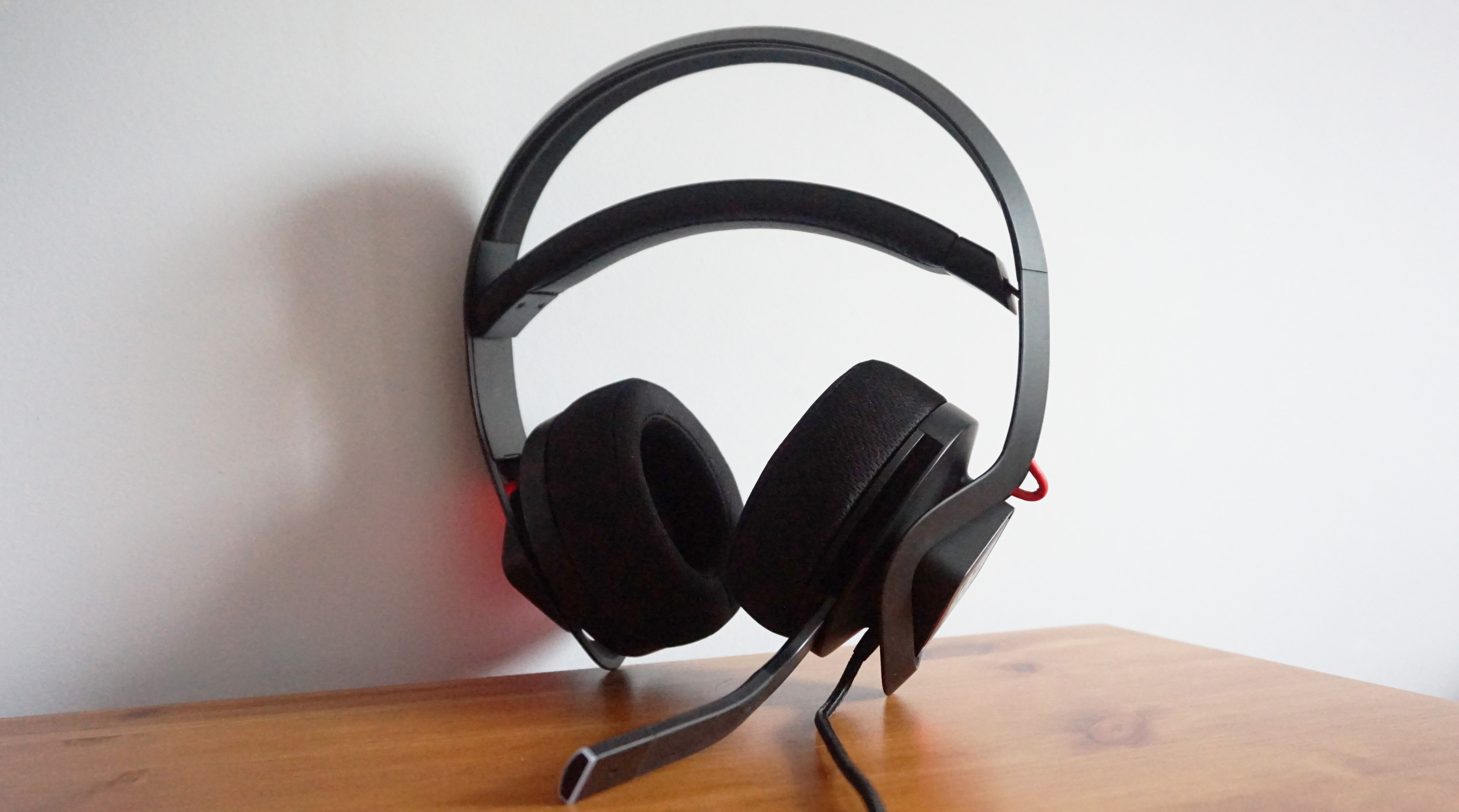 It was only when I got to Hellblade, however, that I started to see some cracks in the Mindframe's performance. Hellblade uses a binaural soundtrack, after all, which is meant to simulate a precise 3D soundscape that accurately captures sounds both near and far away. In the game, this is vital to placing those all important voices inside Senua's head, and a good headset will make it feel like they're all in the room with you, whipping around behind you as they jeer and snipe on the back of your neck.

The Mindframe, however, simply separated out Senua's inner voices to the right and left-ear cup, turning what should have been an all-encompassing soundtrack into a rather weird stereo one. Each voice still came through loud and clear, but the effect was completely ruined.

Thinking back to my earlier test games, I then realised the Mindframe had done the same thing in Doom as well. At the time, I thought it was doing a pretty decent job with its various positional sound effects such as fire ball lobs or plasma fire, but loading the game up again revealed that every sound was jumping quite violently between each ear cup instead of transitioning smoothly from one to the other. I just didn't notice it quite so much because the game's so fast-paced.

Still, while the Mindframe can probably just about get away with this sort of thing in heated action games, it's out of the question for slower, more ponderous games like Hellblade and consequently ends up limiting the headset's overall appeal. I suspect this is probably something to do with its permanent virtual 7.1 surround sound gubbins, as other headsets I've tested in the past also struggle with Hellblade when I've had this stuff switched on. As I mentioned earlier, though, there's no way to turn it off on the Mindframe, as the only controls you have in the Omen Command Centre app are for the lighting and ear-cooling. That's it. No EQ settings, no 'actually I'd like to listen in regular stereo now, thanks'. Nothing. 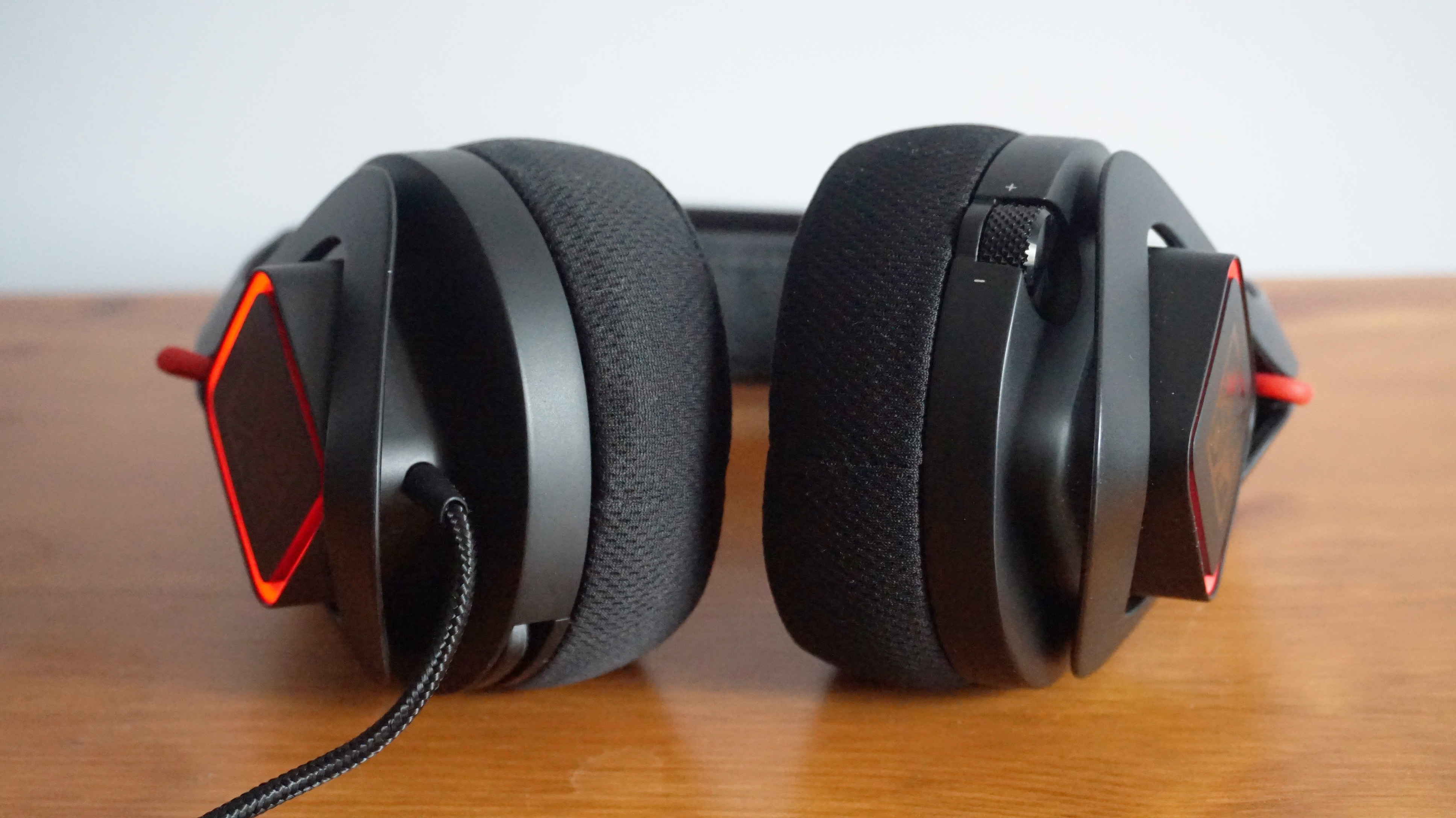 I also wasn't particularly enamoured with the on-earcup volume control, either. It probably didn't help that it had actually broken on my particular review sample by the time it arrived with me - the little twisly knob having come completely unstuck from its little alcove - but even when I'd managed to press it back into place, the tactile sensation of rolling it round under my fingers was just horrible. Somehow it managed to feel both frictionless and gritty at the same time, and it also felt on the verge of just sliding right out from its little nook.

I must admit, I was surprised when I saw glue marks on the inside of the volume knob, as despite the earcups keeping your ears nice and cool, they do get quite toasty on the outside. Now I was never very good at science when I was at school, but my gut tells me that glue and heat are never a good combination for long-term build quality.

I was also mildly alarmed to read in the Mindframe's own instruction manual that I should regularly wipe its inner ear cups with a cloth to remove any excess condensation. I didn't notice this when I previewed it at Gamescom, but sure enough, when I took it off after a couple of hours use, each earcup had a visible amount of moisture inside them. This is probably because the thermoelectric jiggery pokery works by drawing heat away from your ears, but it clearly isn't very good at dispelling it if this is a known problem the user has to deal with regularly.

I'd be more worried if HP hadn't mentioned it in the Mindframe's instruction manual, but it doesn't exactly instil much confidence in the overall longevity of the headset - at least not to me, anyway. Sure, the earcups are meant to be made of moisture-wicking fabric, but that's of little use when it all collects on the metal speaker grille above the driver.

It's a shame, really, as the sensation of having your ears cooled is really quite pleasant. It's completely silent, so it doesn't interfere with whatever you're playing, and I didn't feel nearly as grotty when I took it off after I'd finished playing. I'm just not sure I'd want to put in the effort to maintain it.

The microphone put in a pretty good performance, too. It's flip-to-mute, but it also emits an audible beep when you've moved it far enough to turn it on or off, giving you a nice bit of clarification when you want to take a swig of tea. There was a slight background hiss present when I recorded myself talking in Audacity, but nothing to be overly concerned about for playing games, and the rest of my speech was clear and pop-free.

As for regular music listening, the Mindframe has a tendency to be a bit boomy on the bass side of things. Whereas Final Fantasy XV sounded nice and balanced in-game, for instance, my FFXV soundtrack over in iTunes had a definite bias toward the low-end of the sound spectrum, making drums and percussion sound a bit too echoey for my liking, and brass and double bass a little muddy and lacking detail.

Delicate piano tracks still sounded perfectly fine on the Mindframe, the extra bass actually giving a lot of my collection a nice sense of warmth and depth to them, but as soon as more instruments started entering the mix it all became a bit fudge-like. Rock and pop songs fared better, the vocals in Queen's Don't Stop Me Now coming through clearly against the distinct guitars, piano and percussion, but there are definitely better headsets out there if you want one that can double up on game and regular music duties.

I applaud HP for trying something different with the Omen Mindframe, but ultimately it left me feeling a bit cold. As much as I like the ear-cooling tech in theory, I'm less in love with having to wipe it down every time I want to use it, and the fact you can't turn off its virtual 7.1 surround sound is another huge, well, turn off. It may suit some games down to the ground, but if I'm spending £180 / $200 on a gaming headset, I want one that can do everything without issue. For me, the Steelseries Arctis 7 is still the headset to beat.