HP Omen seem to be going all in on optical mechanical peripherals this year, as they've not only gone and stuck a bunch of light beams in their Omen Reactor gaming mouse, but their new Omen Sequencer keyboard is absolutely chock full of them. The idea is to give both of them lightning fast response times, as the lack of moving parts means that each device's respective switches can reset a lot quicker than their fully mechanical counterparts.

In the Sequencer's case, HP claim its 0.2ms response time makes it 10x faster than your regular mechanical switch. They fail to mention the specific brand of switch they actually tested it against, but it sure makes for some compelling marketing copy. In truth, I can barely tell the difference between regular mechanical keyboard switches, let alone detect whether one's 10x quicker than the other. The only thing that's really important to me is how much noise they make and how easy they are to type on (okay, two things) - and man alive does the Sequencer make one hell of a racket.

In fairness, I wouldn't say the Omen Sequencer was any more grating on the ears than the Razer Huntsman, which was also of the optical-mechanical switch persuasion. Needless to say, though, if you're not so fond of the CLICKIES and the CLACKIES you may want to consider a slightly quieter keyboard. Indeed, if I were to put on the much more common Cherry MX scale of loud to deafening, the Sequencer would definitely be up there at the latter end of the spectrum alongside, if not beyond, the Cherry MX Blue switch.

For all their noise and irritation, however, the Sequencer's optical mechanical switches do provide a welcome level of tactile feedback for general typing - much more so than their linear Blue rivals. In this sense, they almost have more in common with Cherry's bumpy MX Brown switches, as you can feel a distinct kind of step occur before you reach the end of a key press. 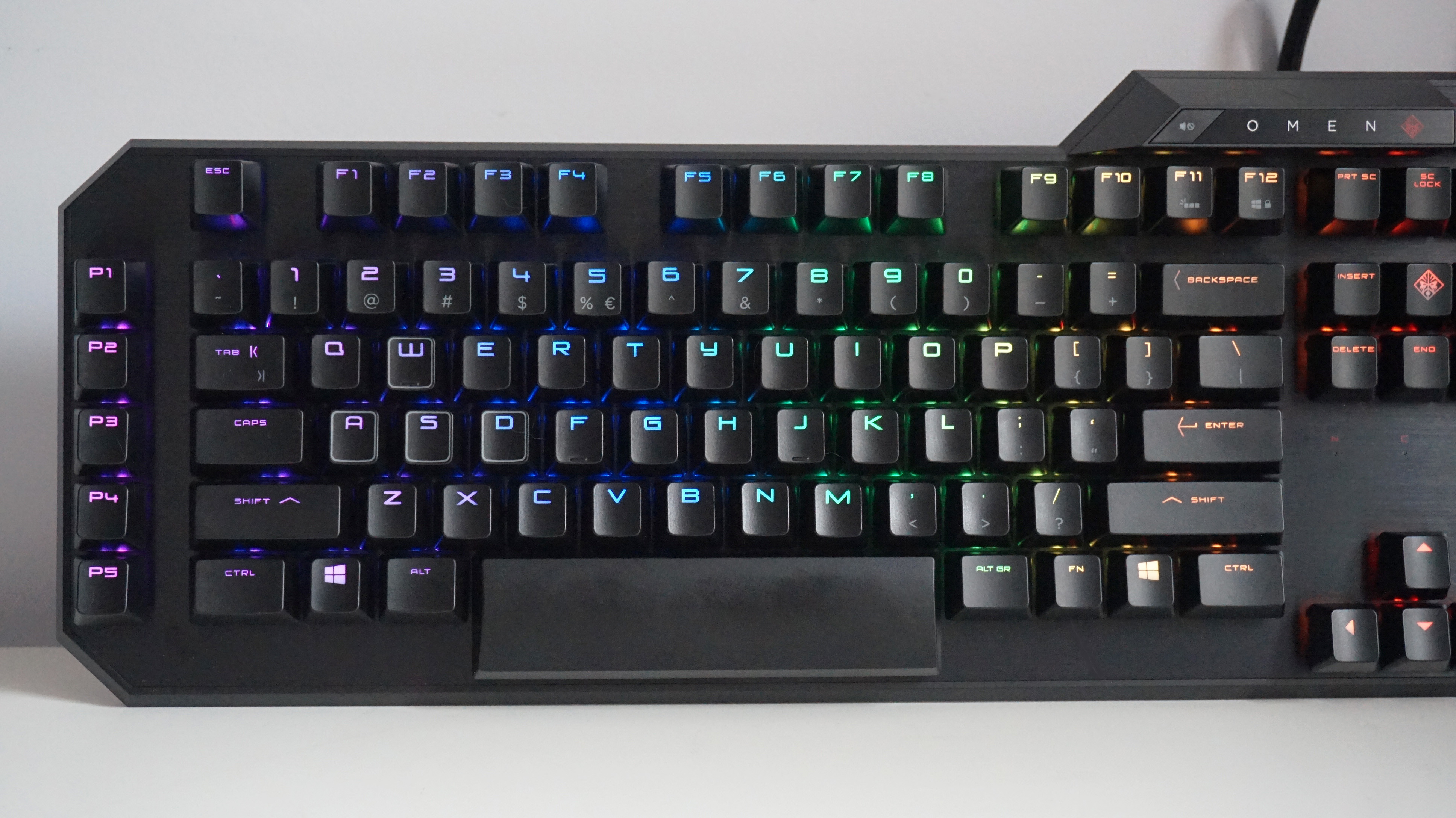 Does this make the Sequencer more pleasant to type on? In some ways, yes, as I know exactly when I've pressed each key, but I also felt that, for all of HP's super duper speed claims, my typing speed actually slowed down because of it. It probably doesn't help that the so-called 'English layout' seems to have more in common with a traditional US layout than a UK one (half-height Enter keys are the DEVIL), but a lot of my early hours with the keyboard were either spent going back over mistakes I'd made because I'd misjudged the spacing, or just generally getting bogged down with each subsequent key press.

The latter isn't necessarily a bad thing, of course, and the spacing is something I eventually got used to over time. Indeed, both of these problems weren't really an issue when it came to playing games either, as mashing the WASD keys in quick succession felt just as responsive as any other mechanical keyboard I've tested recently. That's the problem, though - even if all those other keyboards aren't technically as fast as the Omen Sequencer, they sure as heck feel like they are, which in turn makes them feel nippier and more comfortable to type on for long periods of time.

The one thing I wish all keyboards could have, though, is the Sequencer's giant red volume roller. With its grooved metal texture and smooth rolling action, this is hands down the best volume control I've ever come across. Initially, I thought it might be a fraction too close to the dedicated media keys beneath it, but HP have pitched the angle just right, allowing you to glide a full three fingers over it without bumping into the rest of its keys.

It's a true masterpiece of design, and I also rather liked the cheeky USB passthrough port tucked away in the rear cut off corner at the other end of the keyboard as well. At first, I thought its angled edges were merely a bit of silly 'gamer' design, but I was pleasantly surprised to see it being used like this.

Elsewhere, the Sequencer has your fairly standard set of additional controls, such as a dedicated gaming mode key that locks the Windows button, and five programmable macro keys along the far left hand side. I'm usually a bit wary of having macro keys so far over on a keyboard, as nine times out of ten I usually mistake the lowest macro key for Ctrl. Fortunately, there's a wide enough gap here to prevent that from happening on a regular basis, even if it does add to the Sequencer's overall bulk in the process.

To make use of said macro keys, you'll have to download the Omen Command Centre app from the Microsoft Store. I'll admit I was a bit disappointed with the lack of options available here when I tested the HP Omen Reactor mouse, but with the Sequencer I'm less fussed about what's on offer. You still get the same recordable macro options (keyboard shortcuts, application launchers, in-game text messages and multi-key combinations with customisable delay options), but on a keyboard that's all I would ever really want to use these keys for anyway.

You can also use the Command Centre to create your own custom RGB lighting zones in addition to full keyboard colour schemes, too, allowing you to pick and choose which keys get illuminated and which ones stay off. Whatever you decide to pick, though, you'll probably be pleased to hear the Sequencer's lighting is fairly innocuous compared to a lot of other mechanical keyboards out there, as its largely closed-in key caps prevent a lot of the light from spilling out onto the main board. There's a teensy bit of underglow present, but most of it's coming from the letter and number cut-outs.

On the whole, there's a lot to like about the HP Omen Sequencer, despite it feeling a bit stodgy to type on as an everyday keyboard. There's not only that magnificent red volume roller in the top corner, but its RGB lighting also won't make your eyes bleed when you've got it going full rainbow. Throw in USB passthrough and its dedicated macro and media buttons and you've pretty much got everything you could possibly ask for.

The only problem is the price, as the Omen Sequencer will currently set you back a whopping £160 / $180. Its anodised aluminium frame does go a long way in making it feel like a premium keyboard (did I mention that lovely volume roller?), but that's still a lot of money to pay for something I'm not completely happy to have as my main typing board.

I'd be willing to live with it just for the sake of that gorgeous, scarlet wonder, but really, there are other better and faster-feeling gaming keyboards out there that will probably serve you just as well in the grand scheme of things, such as our current best gaming keyboard crown holder, the £120 / $130 Cherry-based Fnatic Streak, or the even cheaper £96 / $80 HyperX Alloy Elite.