It’s almost impossible to talk about Asakusa Studio's debut game Hyakki Castle without invoking the looming western spectre of Legend of Grimrock. While this particular formula for party-based first-person dungeon crawlery (real-time grid-based movement and all) dates all the way back to Dungeon Master in the 80s, Grimrock is the game that re-launched a genre, and a solid yardstick by which to measure imitators.

Hyakki Castle, then, is Legend of Grimrock - the original, rather than the more open-world sequel - in Medieval, mythical Japan. It’s a pure dungeon crawl with only the most threadbare of stories: a team of four heroes are sent to a cursed castle to stop an evil wizard. Boilerplate, even by dungeon crawl standards. Hyakki Castle has few ambitions of its own and while it comes tantalisingly close to Grimrock at moments, more often than not it feels like a shallow imitation that doesn’t even wear its own aesthetic as comfortably as it should.

I’ve found my time with it enjoyable enough - it’s a genre I’ve always enjoyed, but it’s almost impossible to shake the sense that everything here has been done better elsewhere, and the two defining aspects of the game (the Japanese mythological setting and the option to split your party in half, controlling them separately split-screen style) don’t feel as well baked as they needed to be.

The sense of superficiality begins as early as character creation. Beyond personal expression, there’s little mechanical reason to deviate from the default party provided, as it features one character of each of the four races (only offering slight stat deviations from the human norm) and four classes, which for all their eastern trappings fall into the tried and true Fighter, Rogue, Monk & Priest archetypes, all of which level at the same rate, and gain new abilities through a simple skill grid.

Character creation over, you’re given a brief intro and are unceremoniously dropped into the dungeon without even a guide on what the buttons do. I eventually found there is a limited in-game guide, which I had to refer to just to figure out where my individual party member’s health bars were located. It should say something about the state of the UI’s usability when the top developer-pinned sticky thread on the Steam forums is dedicated to explaining how to move items from one party member’s inventory to another.

Combat balance is a little strange in Hyakki Castle. Enemies tend to only have two or three attacks - usually well telegraphed and evadable with a quick back or side-step - but the damage output can vary enormously just between the melee or ranged attacks of a single monster. A close-range hit might take off a fifth of one character’s health, but a ranged shot might outright kill a party member in one shot, and many larger monster attacks can hit the entire party simultaneously.

If the mechanics presented are to be believed at face value, the game wants you to evade rather than absorb damage, which makes one of the four classes being tanking-oriented (aggro management skills and all) all the more baffling. For the most part, it’s easy to avoid any and all damage if you can fight a single enemy on your own terms, but get cornered between two or more baddies and death seems all but assured. 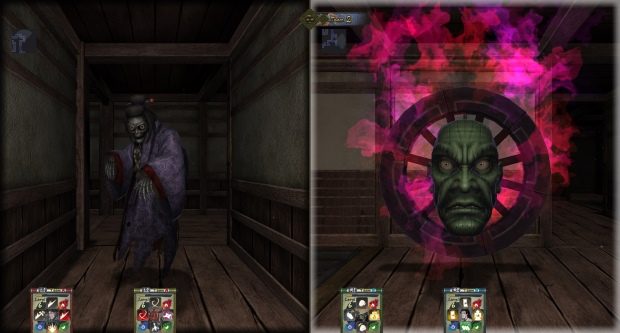 ‘Objection!’ I hear someone completely real at the back shout, referencing an entirely different game. ‘But what about the party-splitting mechanic so heavily featured in the trailers?’ asks this not-at-all hypothetical individual. Well, yes, you’d be right that the game does let you split your party, but as interesting as the idea could have been, there’s almost no reason to do it outside of the handful of puzzles (and I use that term loosely) that require you to stand on two pressure plates at once. It’s an exciting yet woefully under-utilised gimmick.

While you could theoretically try running a party with damage dealers on one side and a tank on the other, the single-square-wide hallways and incredible dexterity required in juggling the two parties in combat makes this less than viable as a playstyle. It’s a shame, really - there are so many ways that they could have leveraged this in the design, but instead it feels like they’ve tried to shoehorn a new mechanic into the Grimrock template without expanding the design to give it room to breathe.

The Japanese myth aesthetic also seems superficial at best. While the monster designs are interesting to look at - a mix of undead critters, spirits, animated angry walls and worse - they feel largely like reskins of standard dungeon crawler foes. This feeling continues in the loot that you get - rather than require a bedroll or a tent to rest (at the expense of hunger), you use a Zabuton, a traditional Japanese floor cushion, which is even more bizarrely disposed of after you’ve had a little sit-down. This might seem fitting if you’re running a party of four Nekomata (cat-folk), but otherwise feels like a cheap reskin of another studio’s design. 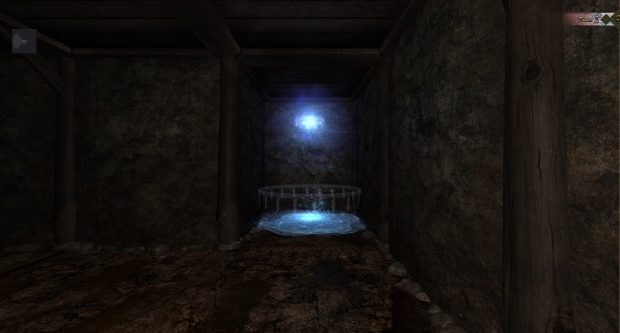 The game even appropriates Grimrock’s blue mystical save points which fully restore your party to health. Any party member dying is your cue to backtrack to the last save point to get them revived for free, because otherwise they’ll miss out on any combat experience the rest of the party earn. It makes death feel more irritating than impactful, as your path back to the last save point will always be clear, turning the return trip into a long, pointless march.

In a truly odd twist, there is a ‘seppuku’ skill which all characters begin with, but must be manually equipped. While described in-game as a way to return to the last save point, it just seems to be a thematically darker way of reverting to your most recent save file. A process done much quicker just by loading your save directly. It feels like Asakusa Studios were just rifling through a grab-bag of Japanese cultural cliches to mash into the game with little idea of how to make them fit.

As a series of combat encounters, Hyakki Castle is solid enough, with some fun traps and ambushes to work around, but otherwise the level design is very straightforward. It lacks Grimrock’s more complex interactions with the world. Items only exist in treasure chests or your inventory, never on the floor. Things cannot be thrown, hidden switches cannot be searched for, and riddles cannot be solved by plugging arbitrary inventory items into holes in the wall. While functional enough in their design, I’ve seen procedurally generated dungeons elsewhere with far more of a human touch.

Every few floors (14 in total, unless I miscounted), your adventure will be punctuated with a boss battle, which largely play out like the regular combat, only on a slightly larger scale. Boss attacks tend to hit across a large area, are even more telegraphed, more deadly (several can kill the entire party instantly) and generally a bit more interesting to look at, but other than needing to hang back and learn some visual tells before diving in, they’re still largely just a matter of hopping forward, unloading every attack skill you have and backing quickly away. Rinse, repeat and Bob’s your shogun.

So many of these sins would be easier to forgive if the game was an atmospheric and aesthetic powerhouse, but it manages to fall short of Grimrock (the original, even) there, too. Relatively simplistic 3D graphics (especially the chunky particle effects) can spoil the mood, with wall textures repeating frequently enough to make many corridors within a given dungeon floor appear identical. This compounds with a slightly-too-small minimap (and a larger map frustratingly hidden within sub-menus) to make for a less comfortable dungeon exploration experience than it should be. 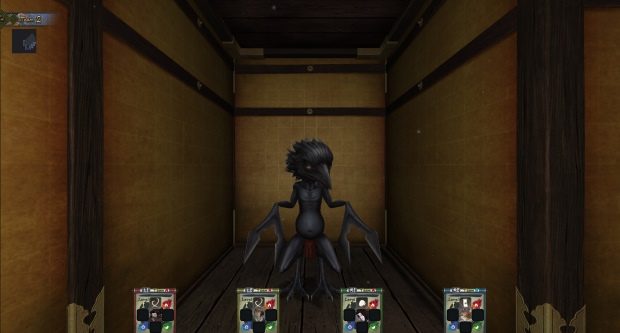 Lastly is one especially bizarre graphical shortcoming that may be a dealbreaker for some. After multiple tests, the game doesn’t seem to scale up to other resolutions as gracefully as it should. At the default window size for the game everything looks pin-sharp. While 3D graphics seem to improve slightly when scaling higher (hard to gauge, given how uniform many wall textures are), the HUD becomes noticeably blurry, as it wasn’t designed to be rendered at any higher than 1280 x 720.

The most frustrating thing, when all is said and done, is that Hyakki Castle isn’t a bad game. It’s just a hollow imitation of a great one, and no matter how many monsters you dress up in traditional Japanese garb, it’s impossible to hide the fact that this is held back by a litany of individually tiny sins that collectively weigh the whole thing down. Grimrock was dungeon crawling comfort food. Simple, satisfying, vertical and easy to binge on, like a tube of Pringles. Hyakki Castle feels like a generic alternative. It’ll fill the gap for a while, but once you pop, stopping might be easier than you’d hope.