If you click on a link and make a purchase we may receive a small commission. Read our editorial policy.
This is part 3 of Nate gets good at AoE2, a series in which Nate attempts to get really good at Age Of Empires 2, via the monstrous crucible of ranked online multiplayer.

I've been having a bit of a rough time in my quest to become good at Age Of Empires 2: Definitive Edition. After my first ranked win, I had a streak of confidence-fuelled victories, and started to feel like maybe I was the Big Man. But oh, no. I was not. The wins took me out of the world of newcomers, into the wide band of the leaderboard frequented by people who actually know how to play, and I got beaten into the ground with a bastard sword. As ever, my weakness was timidity about being aggressive early. I'd try to "fast castle", focusing on rapid early economic growth so as to get to the game's third tech tier, only to have a squad of gits march into my base eleven minutes into the game, because my enemy had thrown everything into a feudal age military rush. But now, it seems, my luck has turned.

Having been battered back to an ELO (the score what tells you how good you are) in the 800s, I'm now at a lower level than I was when I started playing, and I'm surrounded by people who haven't even heard of a build order. So, going by the grim inverse golden rule that applies to multiplayer games, in which the best way to improve your game is to do unto others what you hate to have done unto you, I've become a complete arse. It's all feudal aggression, all the time, and it's working for me. Here's a game in which I was an utter sod, and the first in a while I can say I'm legit proud of. 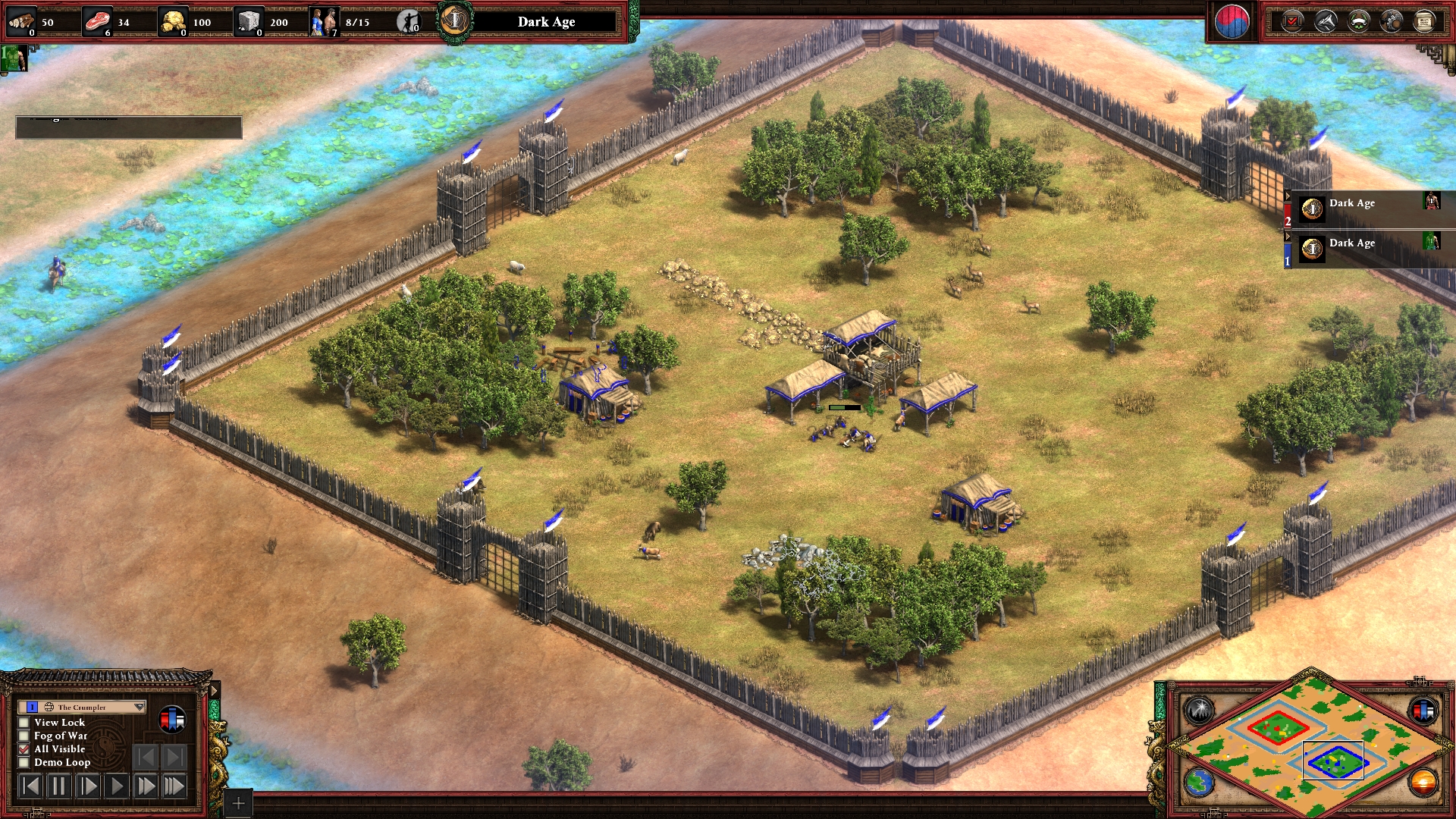 The showdown took place on Hill Fort, a map that's been added to the ranked match pool quite recently. It's a simple map: each player starts with an easily defensible hilltop stronghold, but must eventually venture out into the surrounding lowlands for the resources they'll need to get to the late game. You'd think it'd be a bad map for early aggression, since each fort is surrounded by palisade walls at the top of a steep slope... but then, there's the Koreans. Korean civ bonuses are all about getting defensive towers up early and making them stronger, and one of the most hated strategies in the game is the Tower Rush, which involves surrounding your enemy with arrow-spitting fortifications before they can militarise. Here's how I'd make it work on Hill Fort: 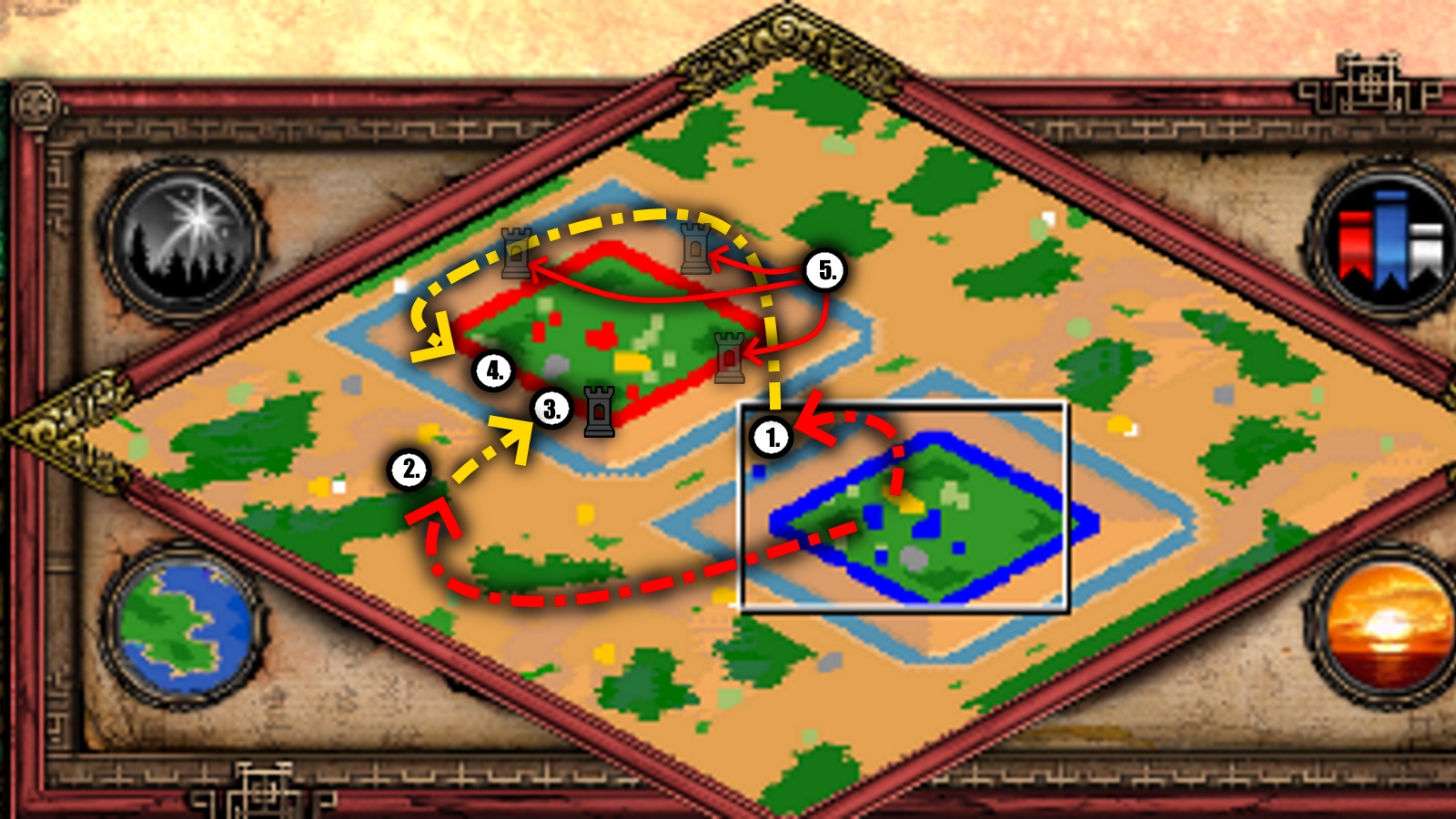 1) Send a villager into the strip of land between forts to build a barracks super early: when the enemy sees it, they'll figure a drush (dark age rush) is incoming, and prepare accordingly.
2) At the same time, send two or three villagers round the side of the enemy base, out of their line of site, to wait for feudal age. If possible, they should mine stone while they wait (there was some under where I've put the arrow). While heading up to feudal age, build three militia at the barracks.
3) The second you hit feudal, build a tower outside the enemy wall, overlooking their food collection site, or any other resource if that's not feasible - the aim is to trap them in the feudal age by constraining their food income and making them spend it on defence. Send your militia to guard the construction site.
4) Upgrade your militia to men at arms as they waddle over, and begin battering the nearest gate to your tower, while your villagers throw up a second tower to cover the first.
5) As you reach for castle age back at base, have your villagers build as many towers as you can afford overlooking resource collection in the enemy base, positioned in pairs so they can cover each others' bases. Then win, maybe???

Well, here's how it played out: 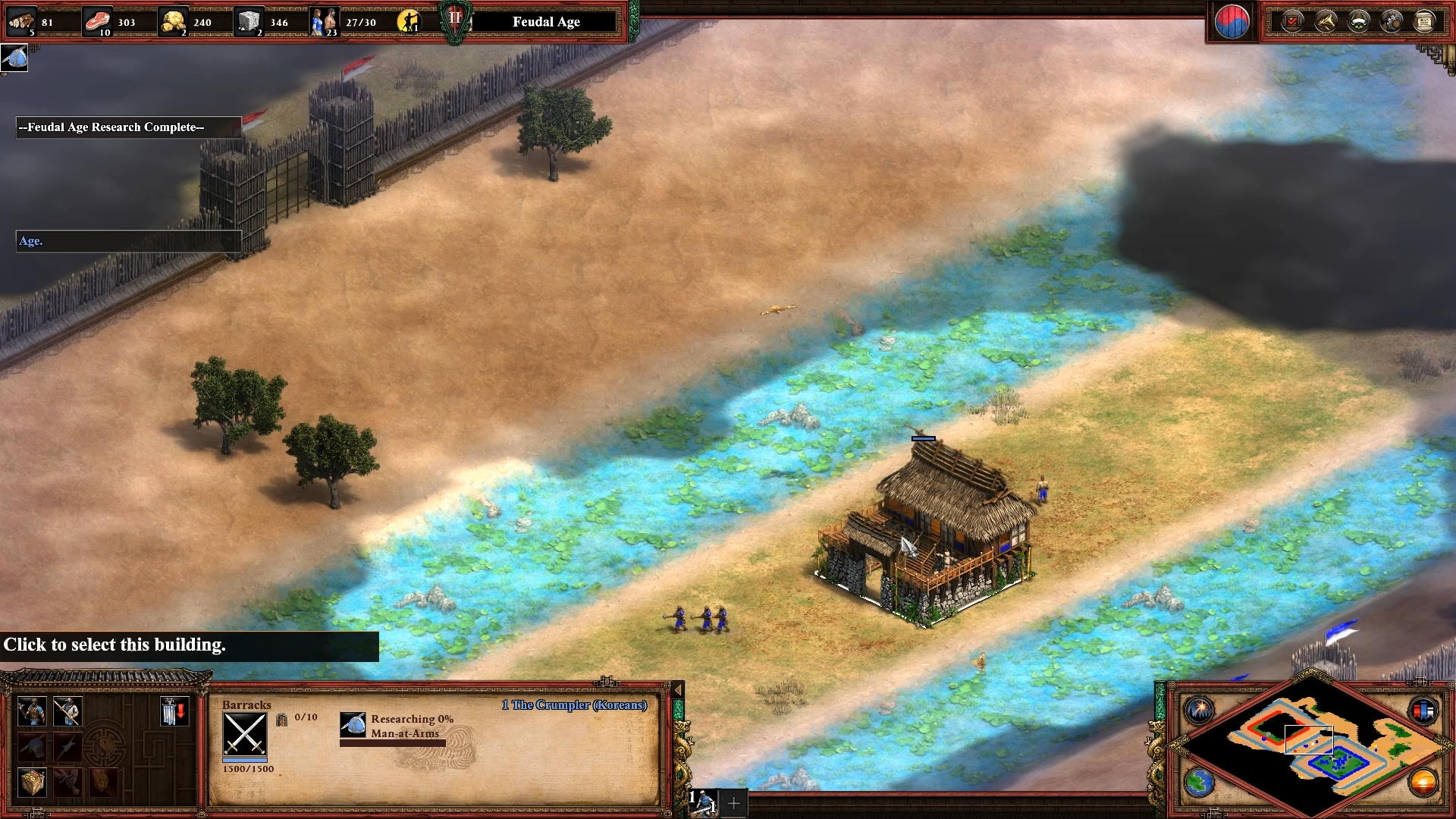 Step one was admittedly pretty simple. Indeed, right after seeing my barracks, the enemy freaked out and built one right next to it, a way away from their base. Good news. Then, the moment the little rattly noise told me I'd invented feudalism, my three little geezers legged it up the hill to build the first tower, and the brutish militia came swaggering over to cover the operation, while thinking really hard about becoming men at arms. 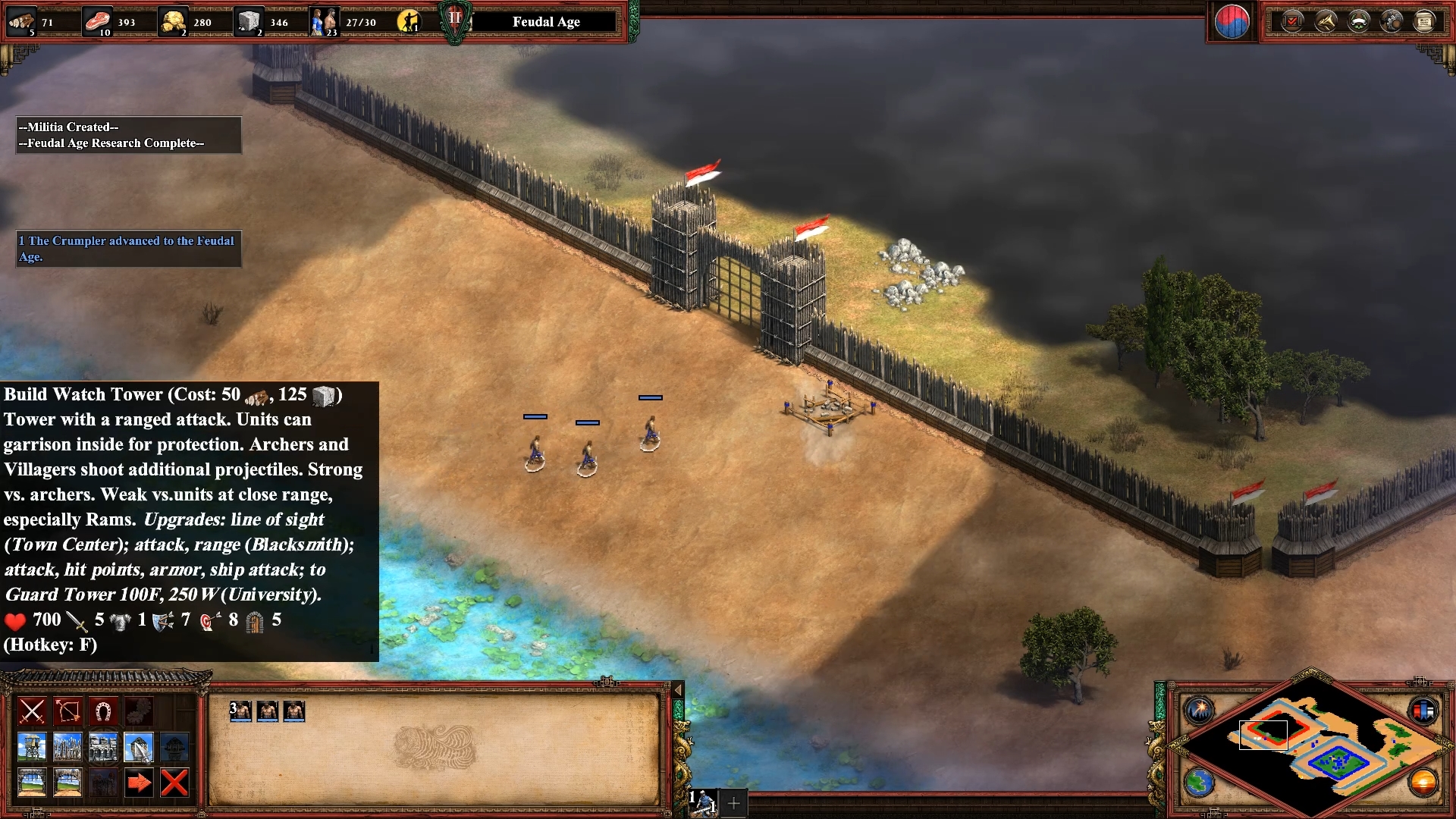 Red tried to defend the gate by building a barracks on the other side, but my tower (and then towers) made swift work of picking off the builders, and the men at arms - now pumped up by blacksmith upgrades as I didn't need the food to rush to castle - kicked the incomplete building to matchsticks. 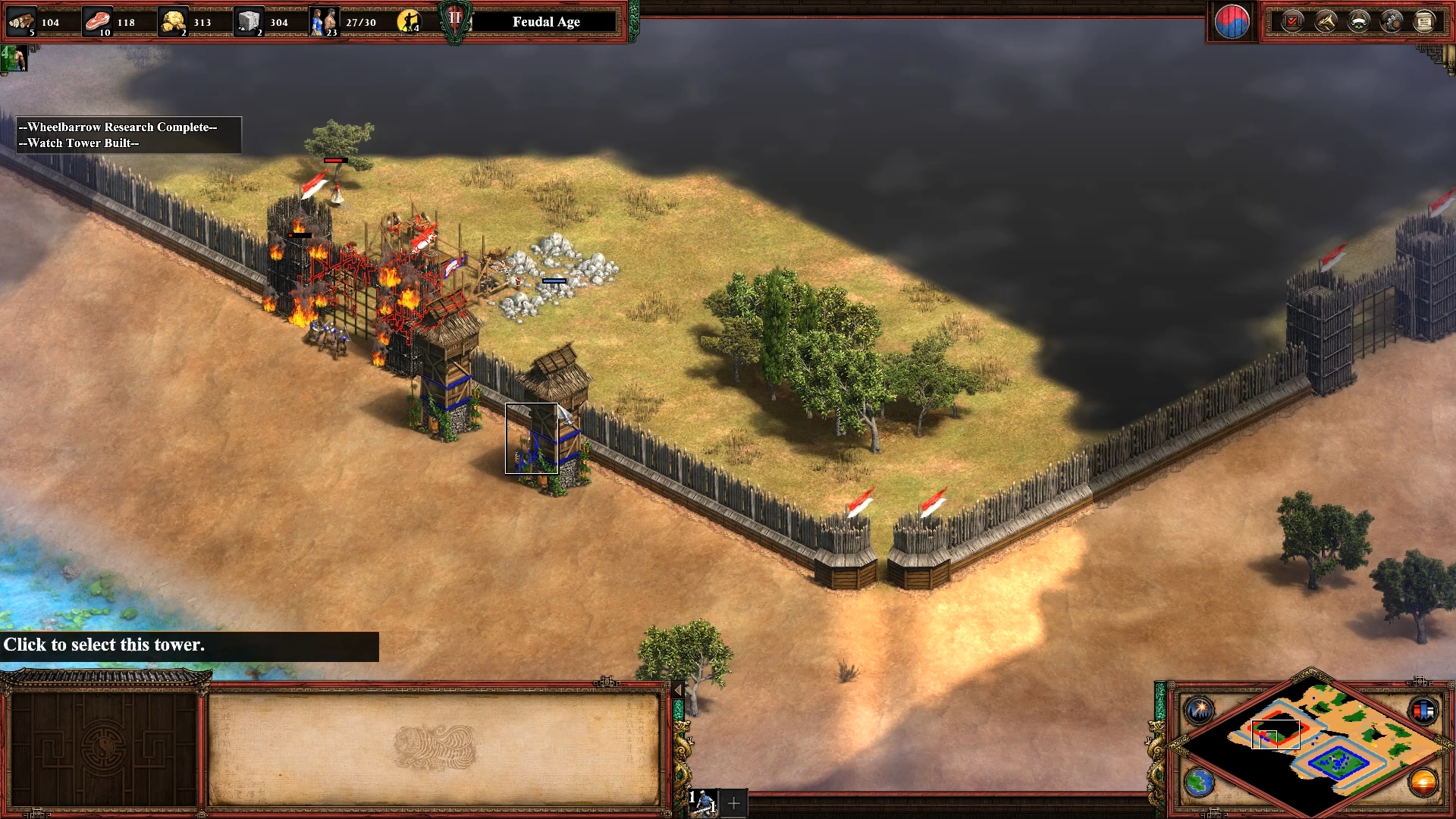 But as my villagers began building new towers all round the enemy base, my marauding fightmen got to the middle and found the enemy town centre was... gone? 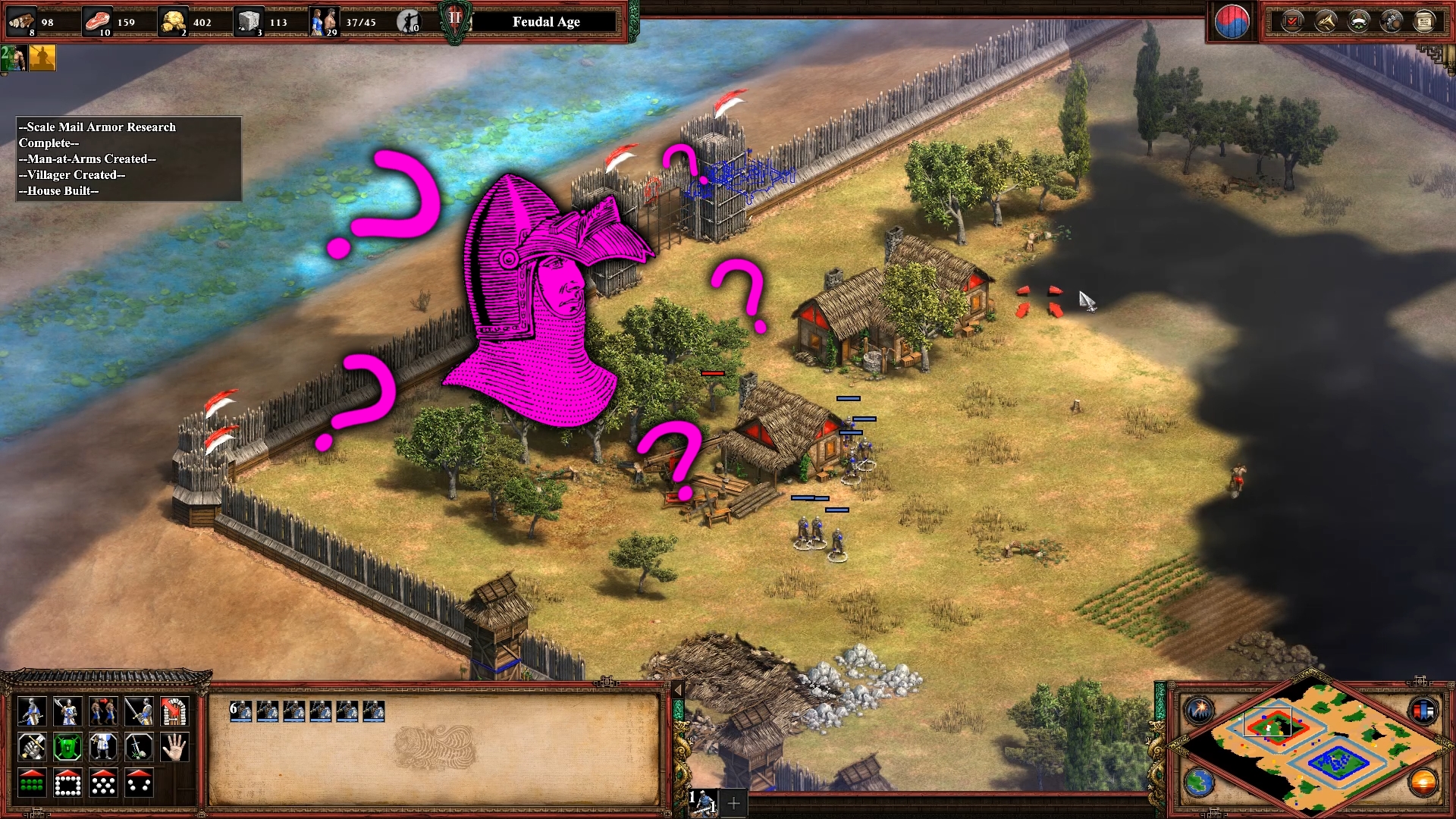 It turns out the poor fellow had demolished it himself, and rebuilt it nearby, when he figured out what was about to happen to him. Doing so, however, had put him at a massive economic disadvantage, while I was unchallenged and able to make it to castle at a leisurely pace. Inevitably, the brutes descended on his fledgling new base, soon followed by yet more towers: 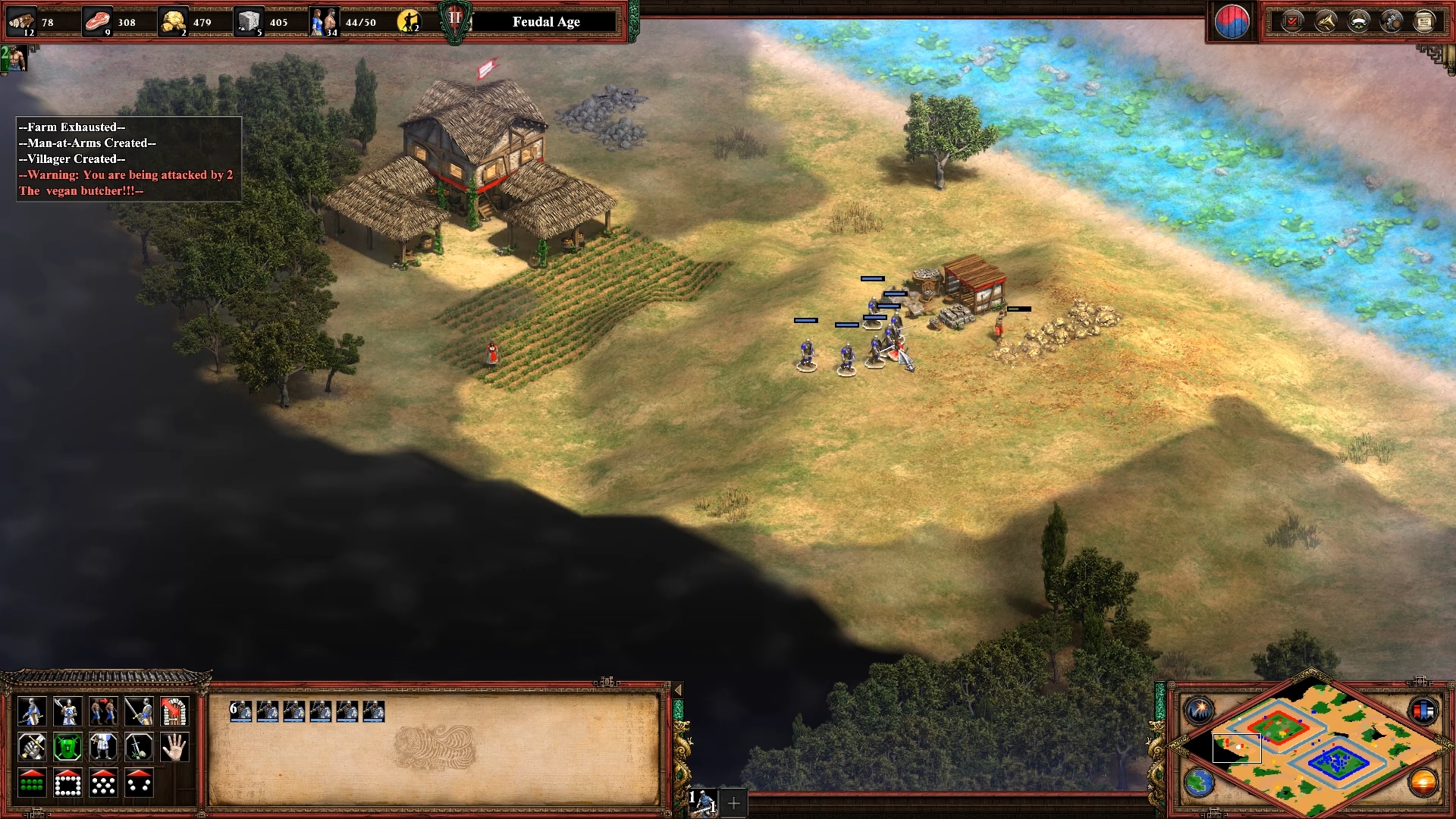 Red was tenacious beyond any hope of a comeback, and tried this trick once more, before I finally hunted down every last villager and finished him off. It is important to respect one's opponents even in victory, however, and so I did offer my foe one honourable gesture. Seeing one of his struggling villagers being assailed by a wolf, I sent in one of my own to give it a good stabbing. On the brink of the wolf's demise, red's villager turned... and began stabbing his rescuer. He died as he deserved: savaged by a dying wolf. Let that be a lesson to you. 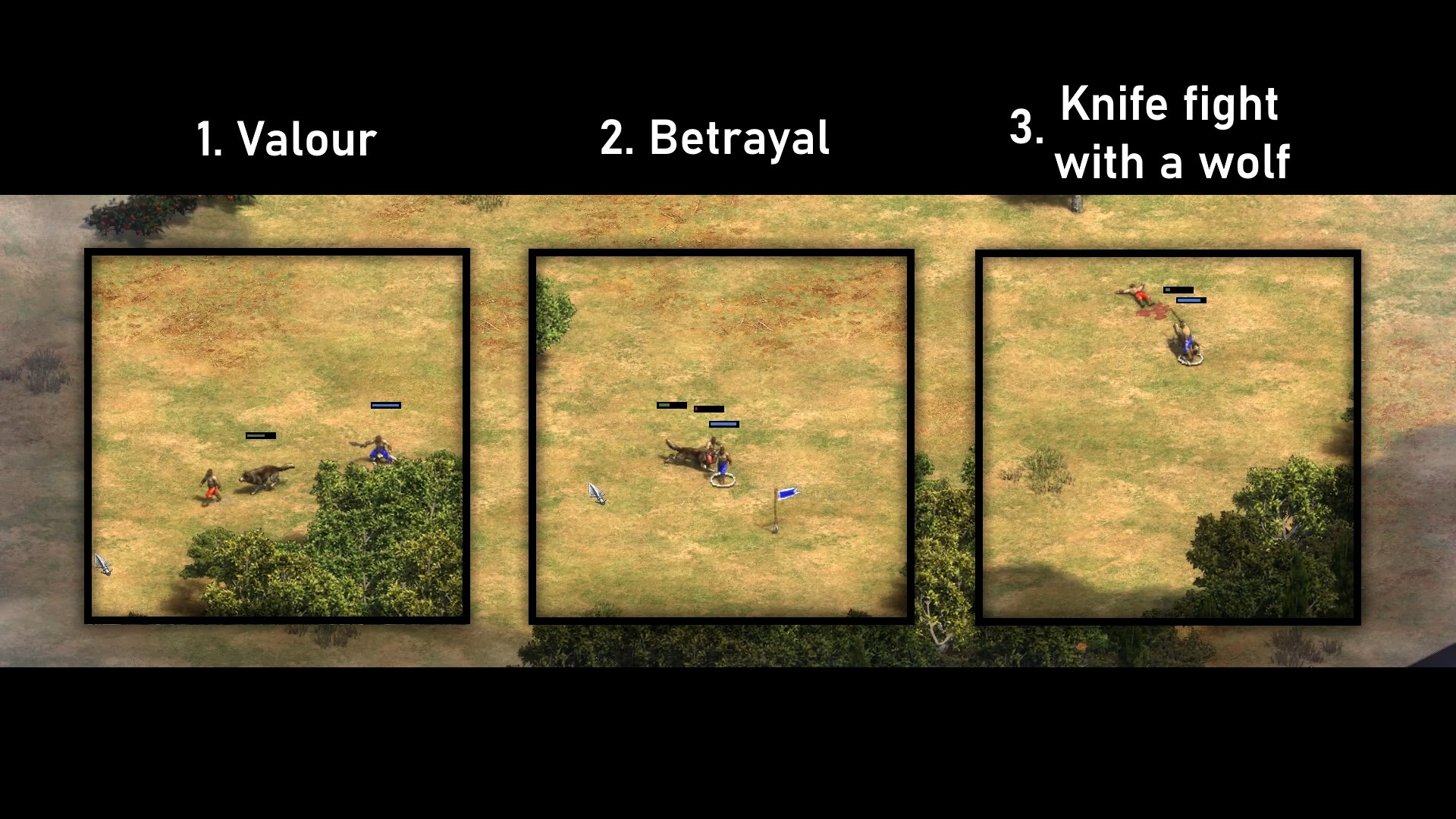