I've been playing the new Hitman 2 level for about ten minutes when I decide that Ian Hitman needs some change. Not change in the Smashmouth sense where the bloke earnestly asks him for some money and he responds by uselessly philosophising at him in F# major for a bit, but actual hard currency. Maybe an artisan market has popped up in the high street and they're cash only, but he wants to buy himself some baklava. Maybe he needs a quid to play Time Crisis. Maybe I'm of a mind to test the sequence of events and player-agnostic world. There's no way to ever know for sure. But whatever the reason is, Ian Hitman is still queuing in the bank.

11:00 am: The queues are pretty short. Things are looking good. 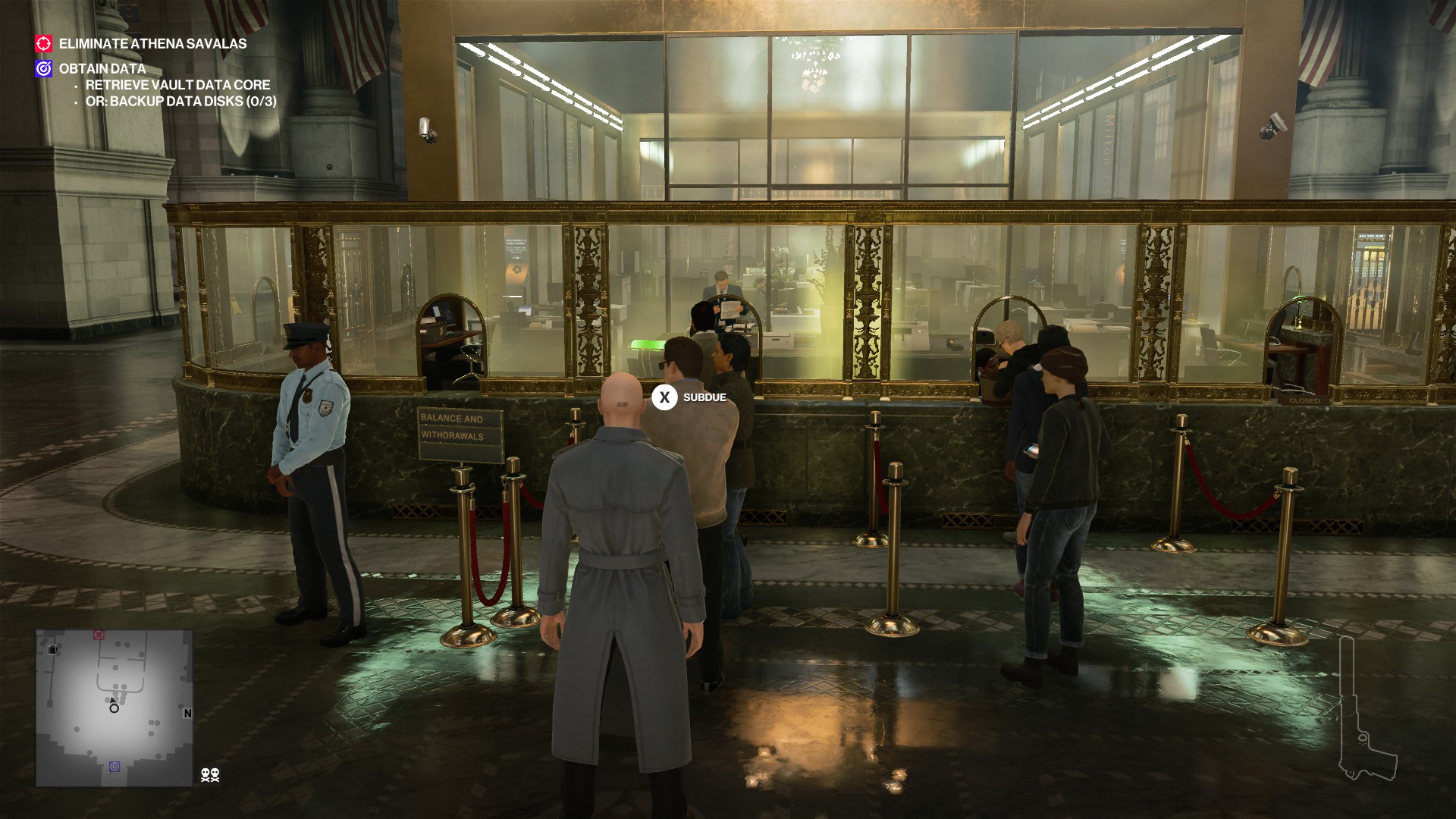 11:10 am: After standing uselessly in the queue on the right for ten minutes, listening to the woman at the front worry out loud about the documents she's lost, Ian decides to switch to the left. Someone compliments his suit, which is nice, especially as he's not actually wearing one. The bloke in front of him turns around to complain that he's violating his personal space. Ian is in fact maintaining the exact amount of space between them as there is between everyone else in the queue. This is already a testing experience. Ian might have to kill this man later

11:20 am: Still no movement at all. Ian Hitman is thinking about the last time he managed to fit a nice evening of self care into his schedule. A bubble bath. Get his barcode exfoliated, whatever. It's been ages. The bank teller is starting to break down a little, tells the bloke at the front he's holding up the queue. The woman in the middle of the queue makes a phone call and loudly calls front guy an arsehole. Could this result in queue movement? Sadly, in true arsehole fashion, front guy either doesn't notice or doesn't care. Phone lady complains about her cash card not working. Ian Hitman plays with his pocket fluff and absently gazes at the tasteful chandelier dangling directly above the heads of the people currently ruining his day 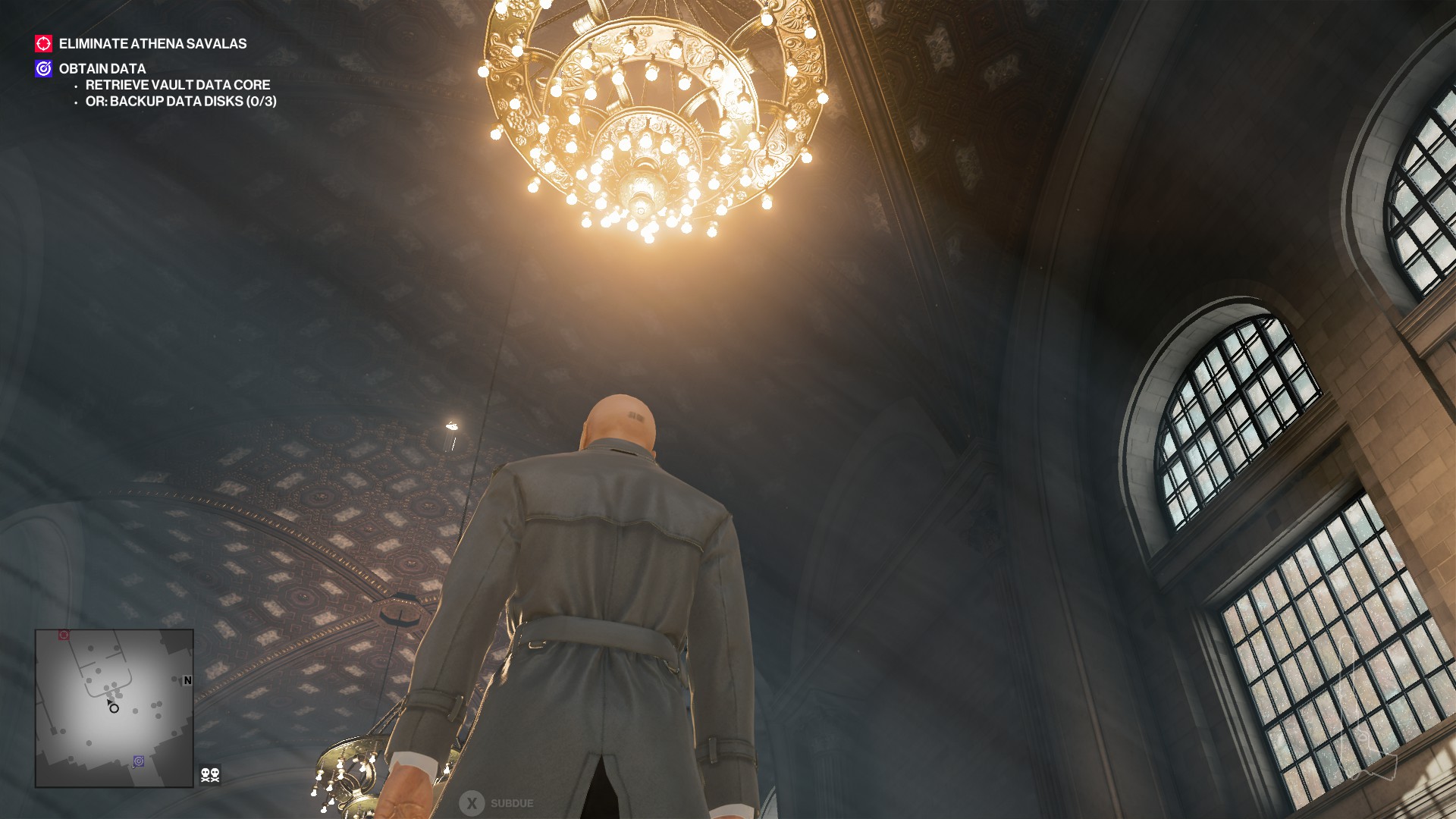 11:25 am: Ian Hitman is thirsty. He goes over to the water fountain but he seems to have lost his ability to interact with everyday objects in ways that don't directly contribute to murder in some fashion. 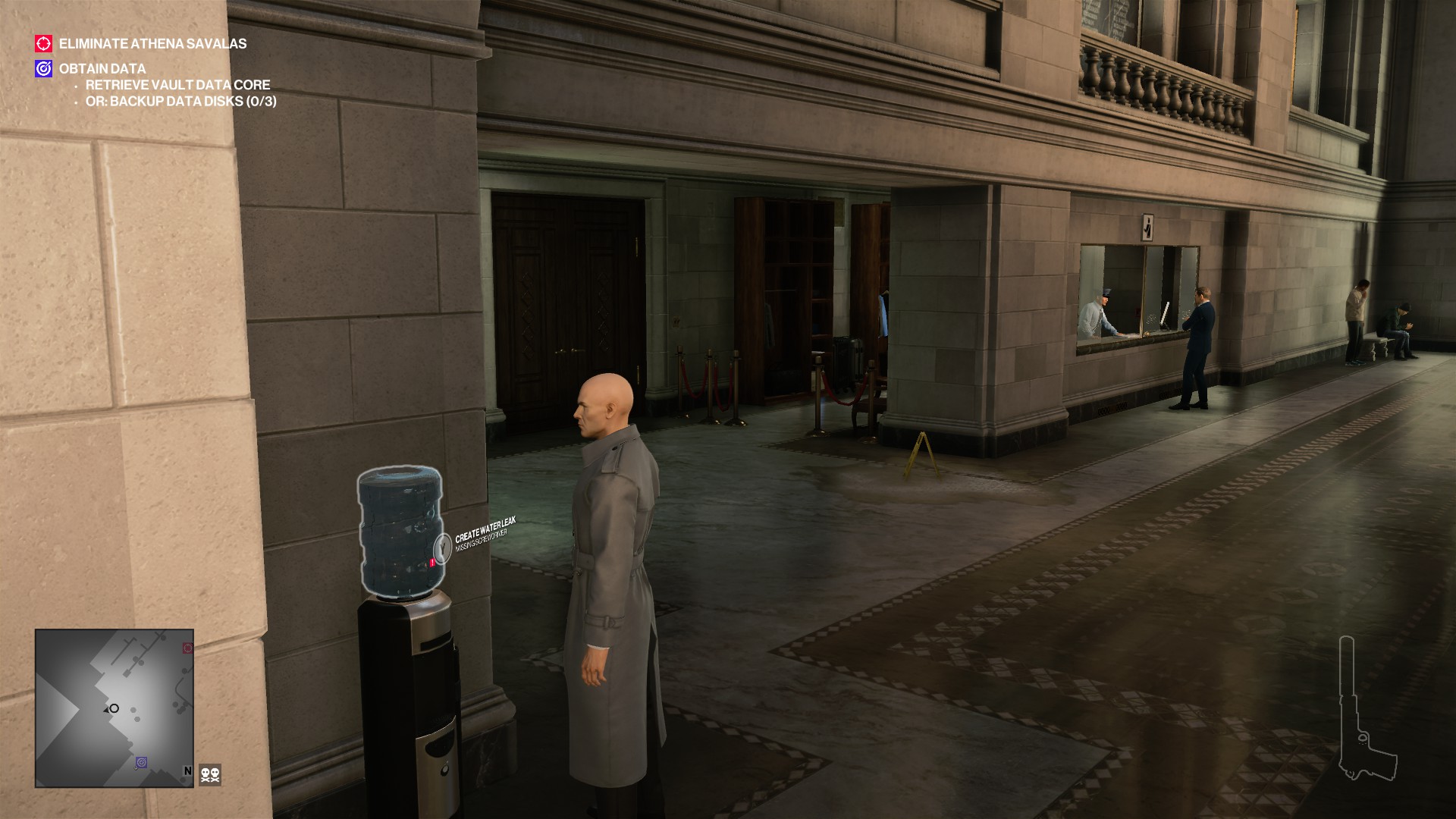 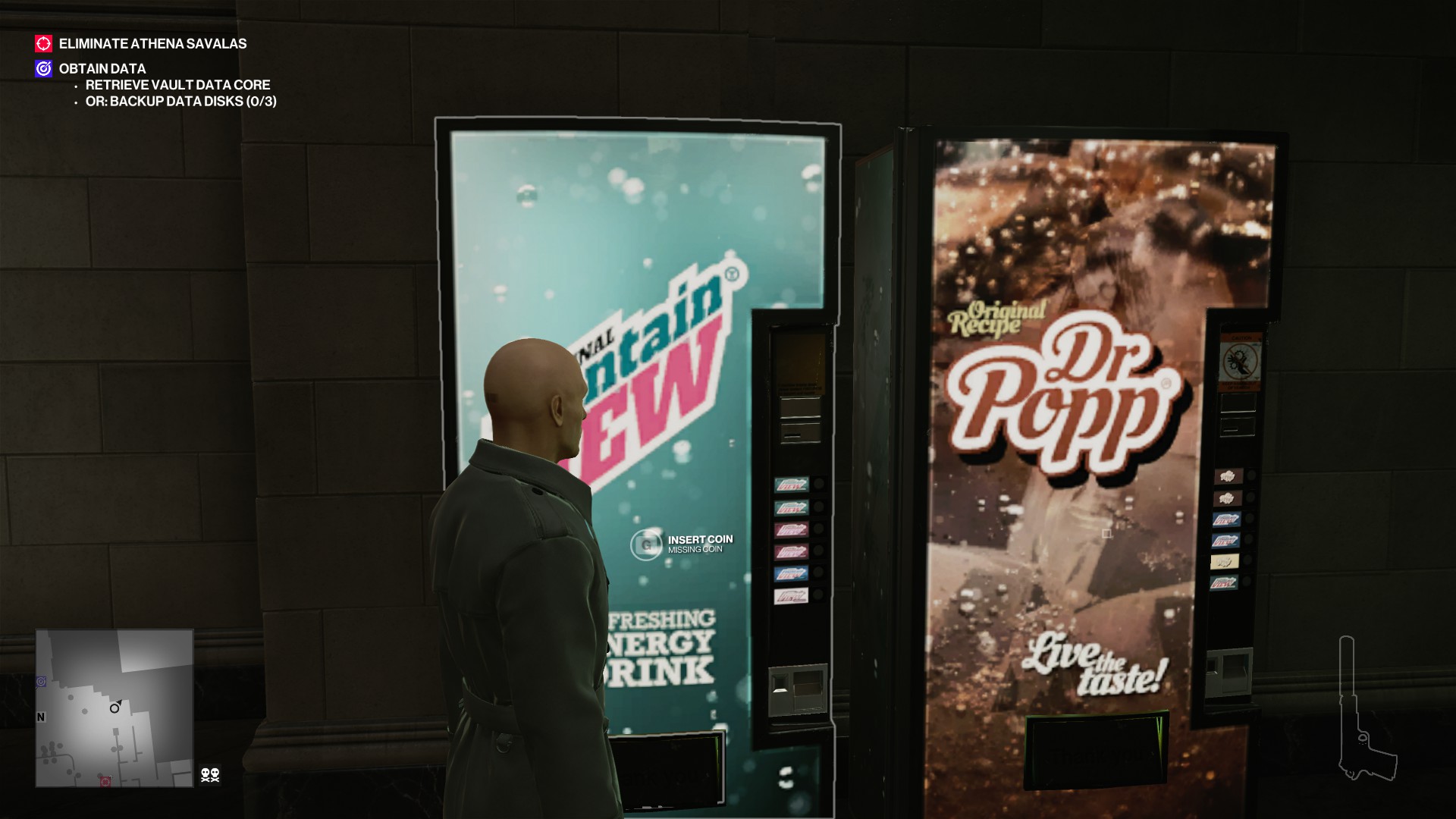 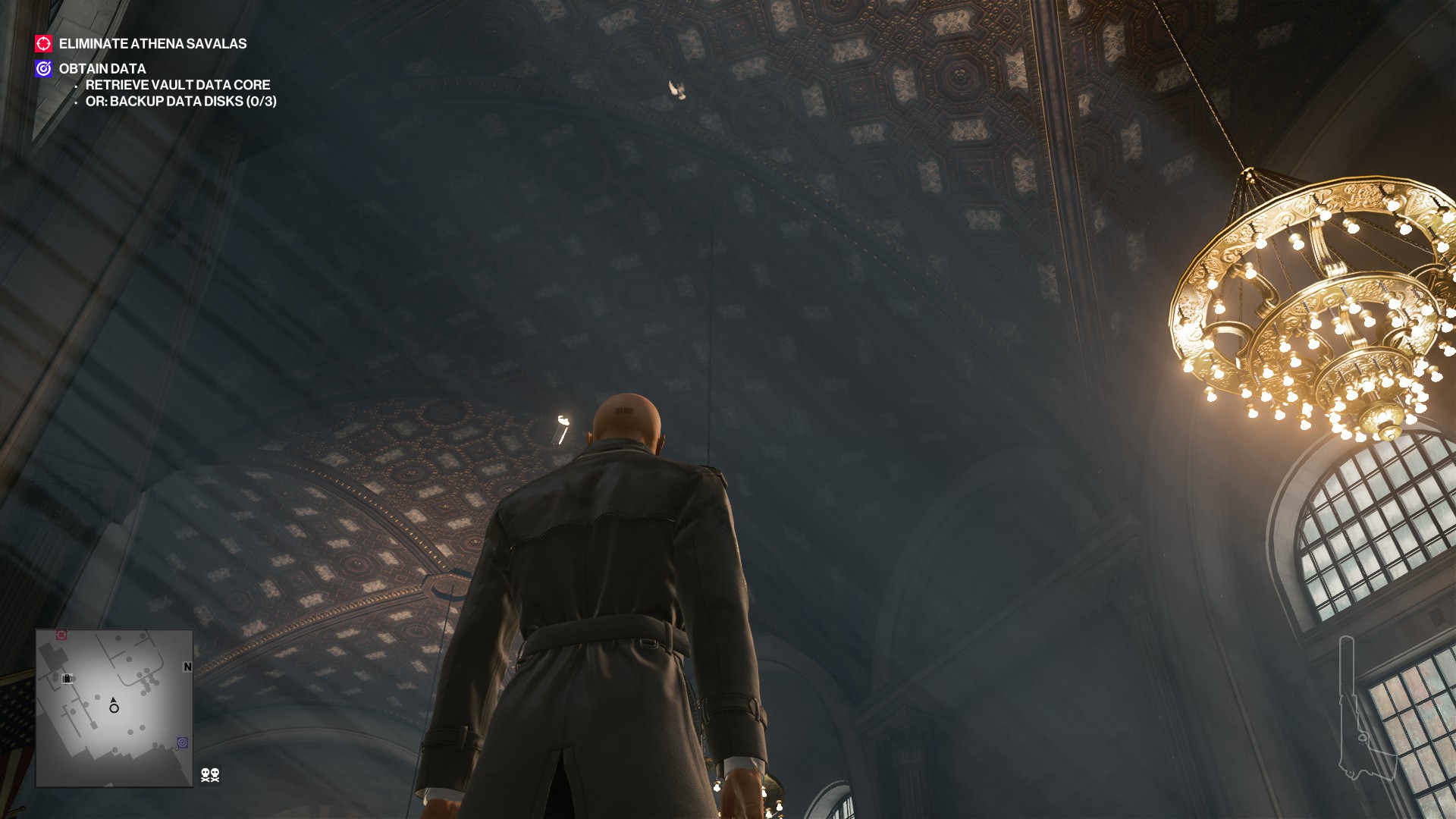 Ah, but to be a pigeon, thinks Ian Hitman. To be free and subsist on stolen chips and the roasted back flesh of sleeping sunbathers, and never have to queue again. These thoughts of freedom soon become too much to bear. Ian Hitman snaps, and runs to the other side of the bank, to slip the surly bonds of decorum and escape the hell-queue. He finds... 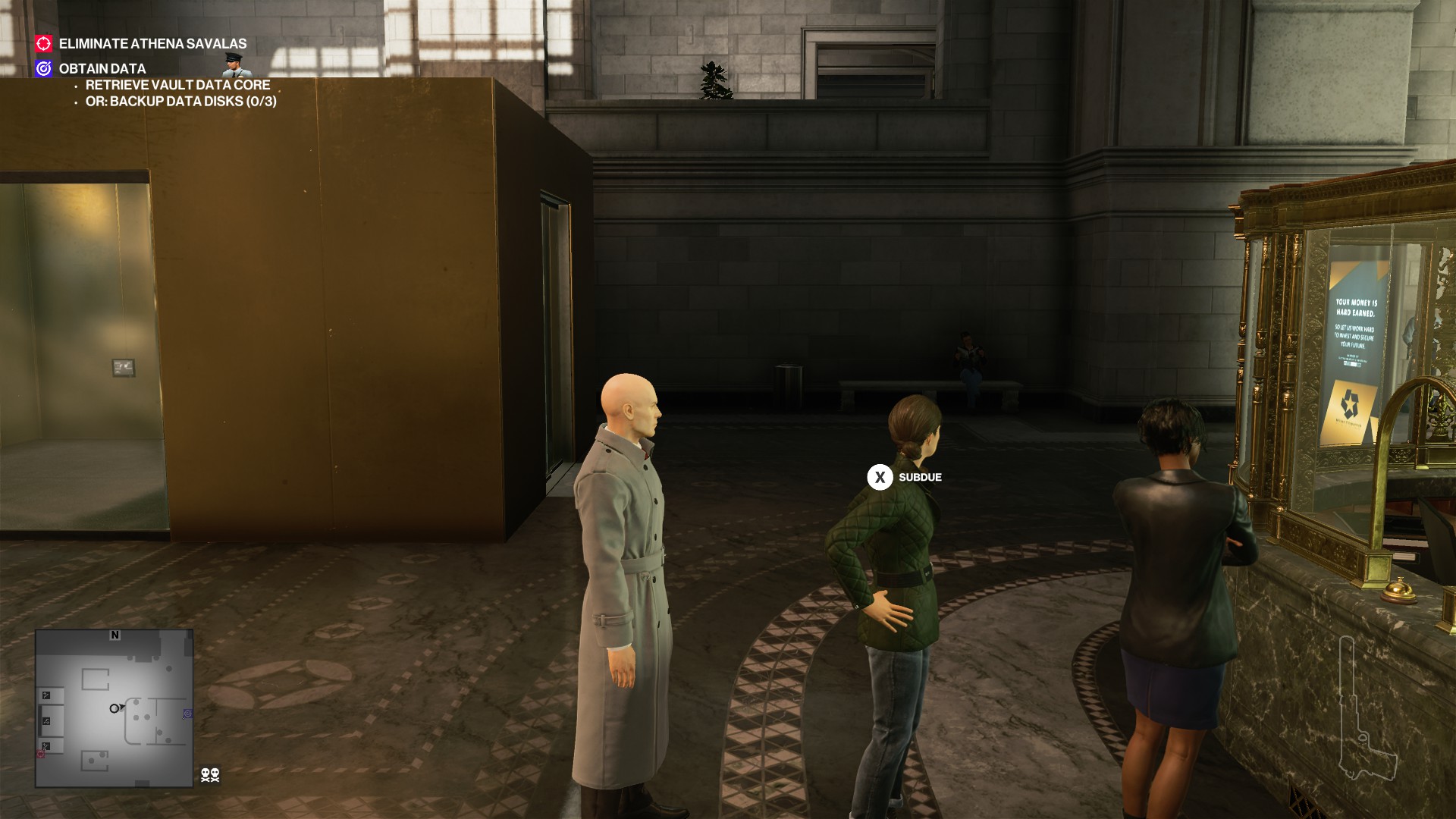 11:30 am: Another queue. Incredible. This one is a little bit shorter again, though. Perhaps he'll have better luck here.

11:33 am: This queue does not move either. After some seconds of blank staring, it becomes painfully clear there's no-one at the window. There's no one. At. The. Window. And yet, the queue has formed anyway. Is this a joke? Some sort of in-game hidden camera prank? An incredibly well realised simulation of the real bank queue experience?

But look! There's a bloke inside on a laptop. Ian decides to pop round and give him a tap on the shoulder. He probably just got distracted. He'll sort the queue out in no time. 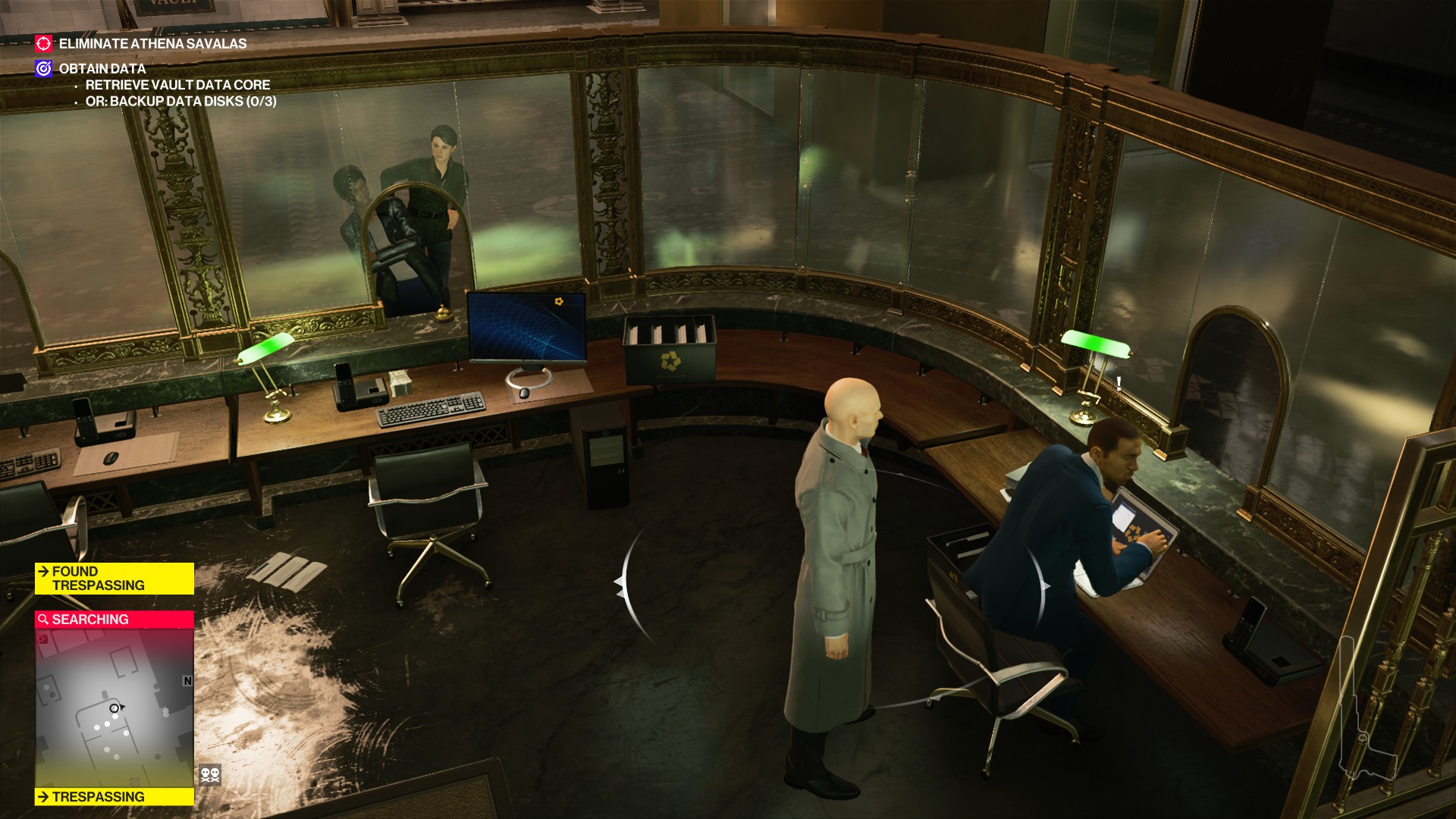 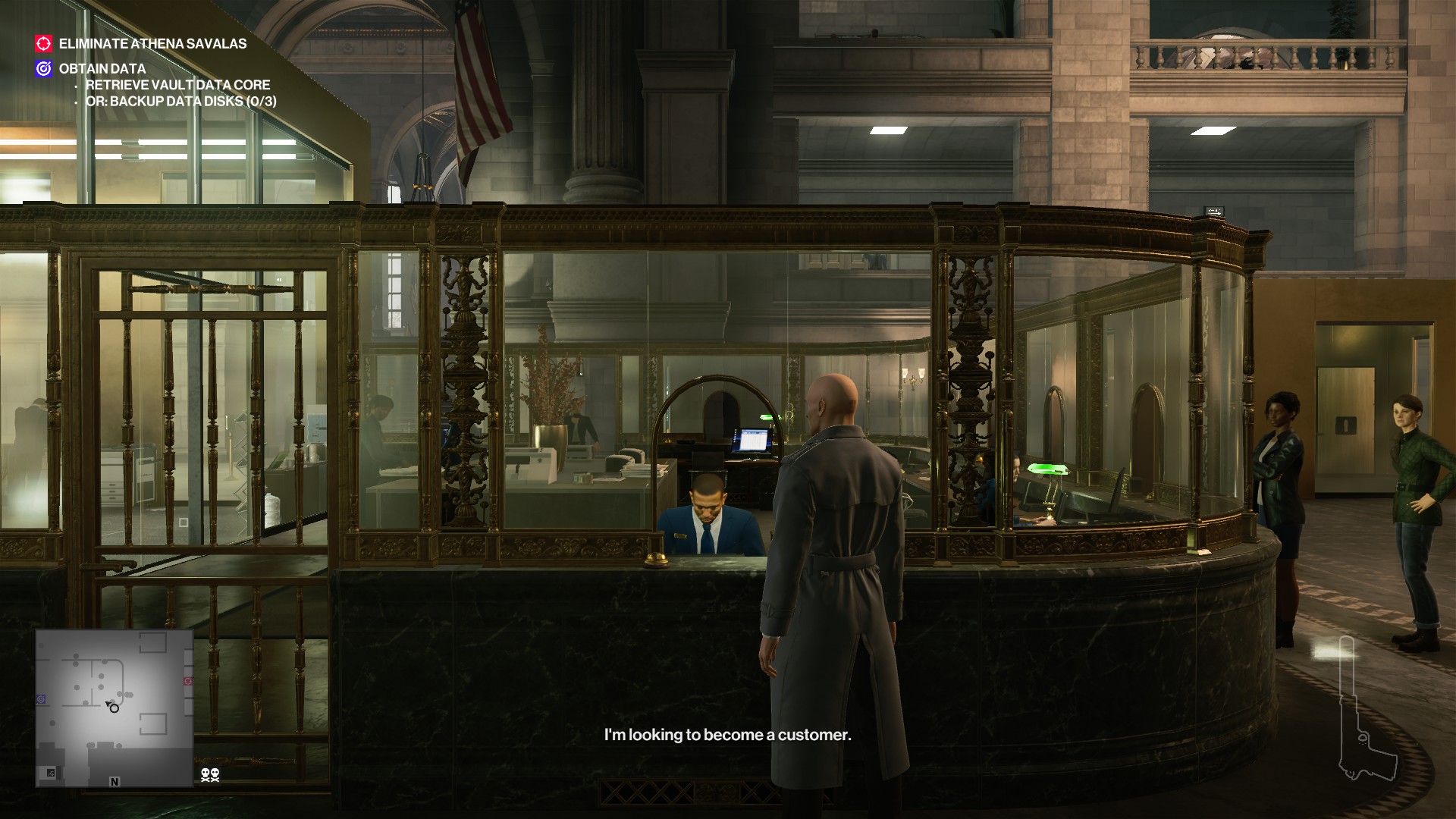 11:36 am: Finally, Mr. Hitman is heading in the right direction. Turns out he didn't have to queue with the proles after all, because there's a special queue for special people. Check out the seething jealously from the two on the left. Enjoy your infinity queue friends! 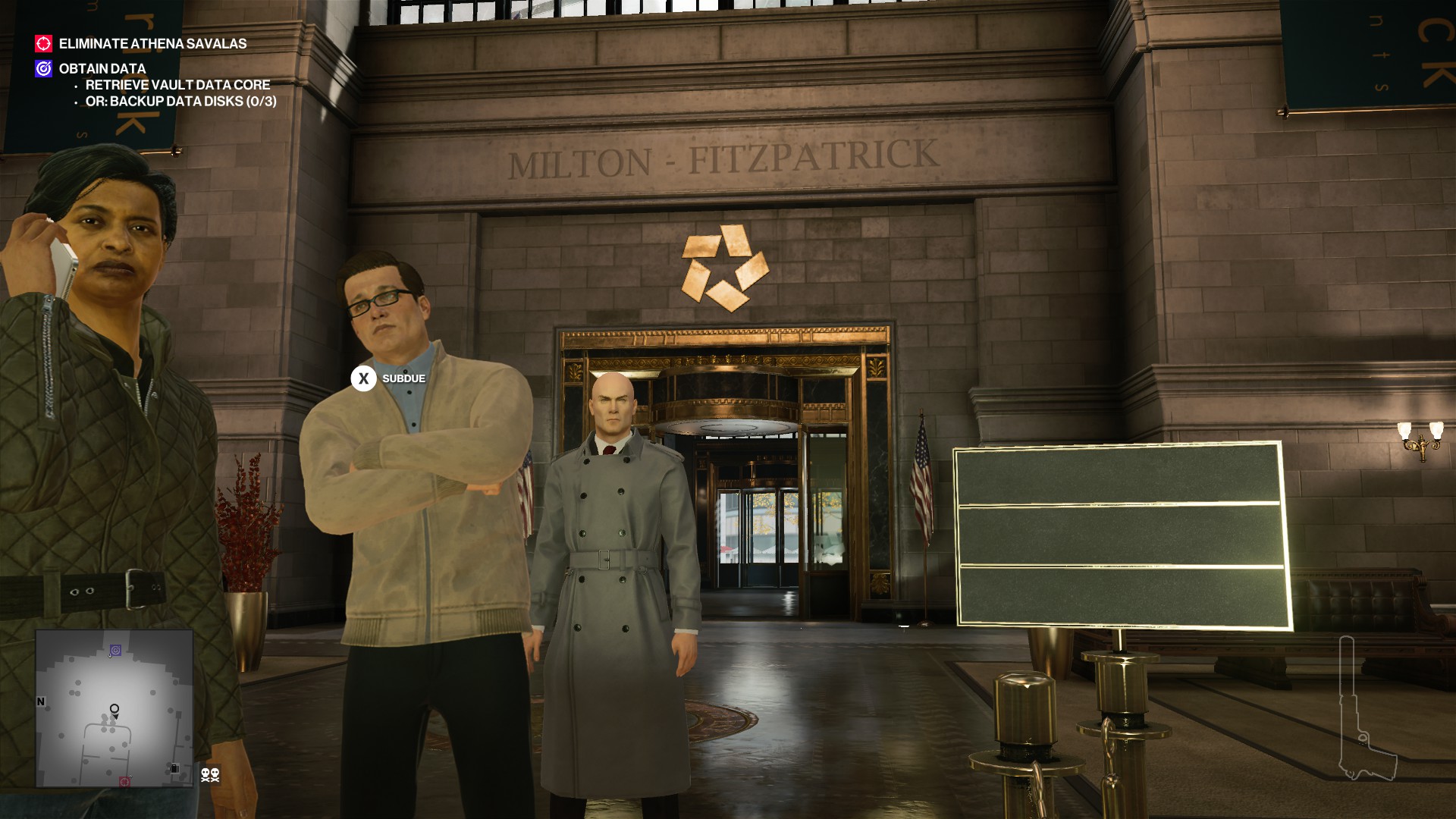 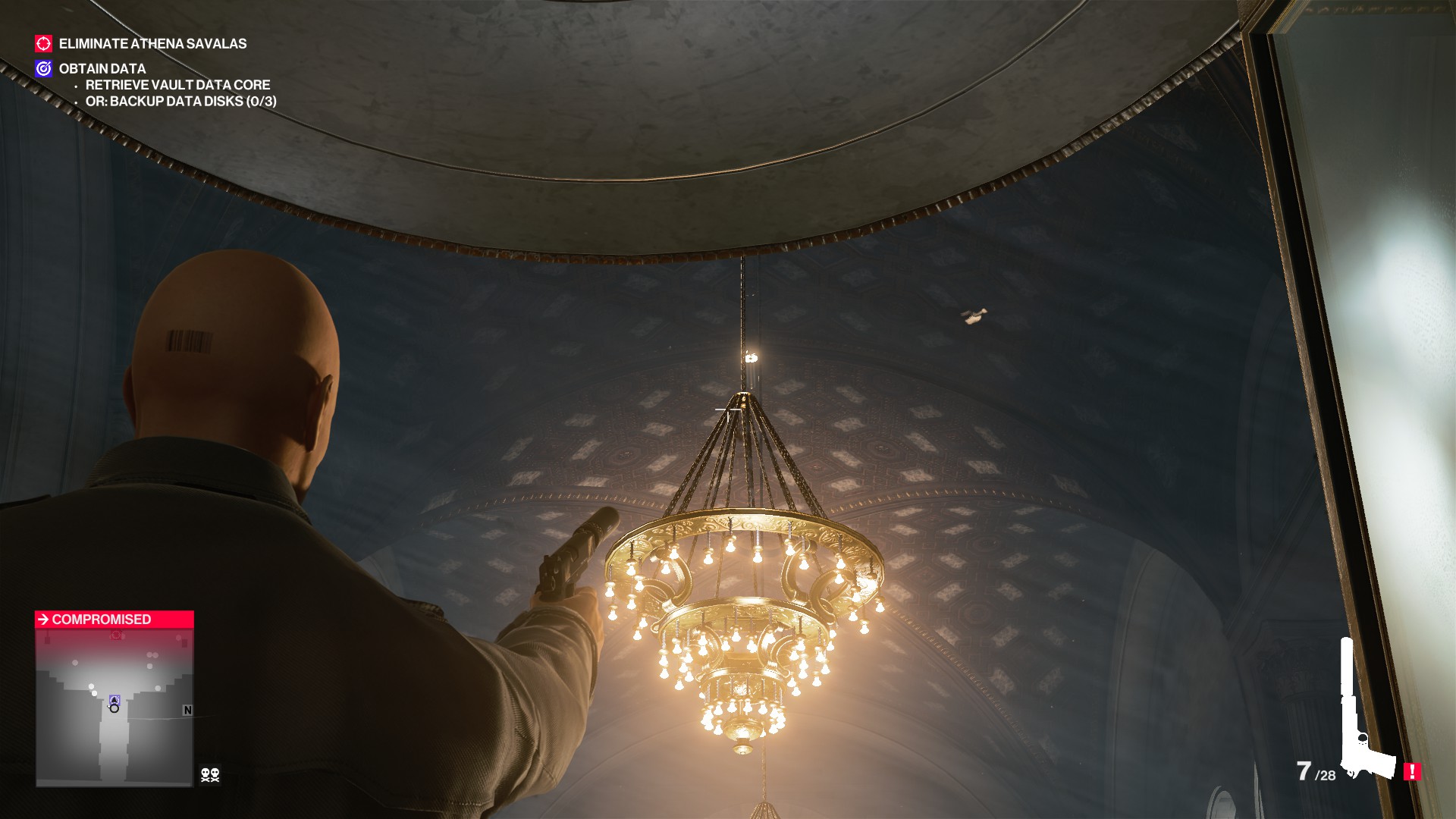 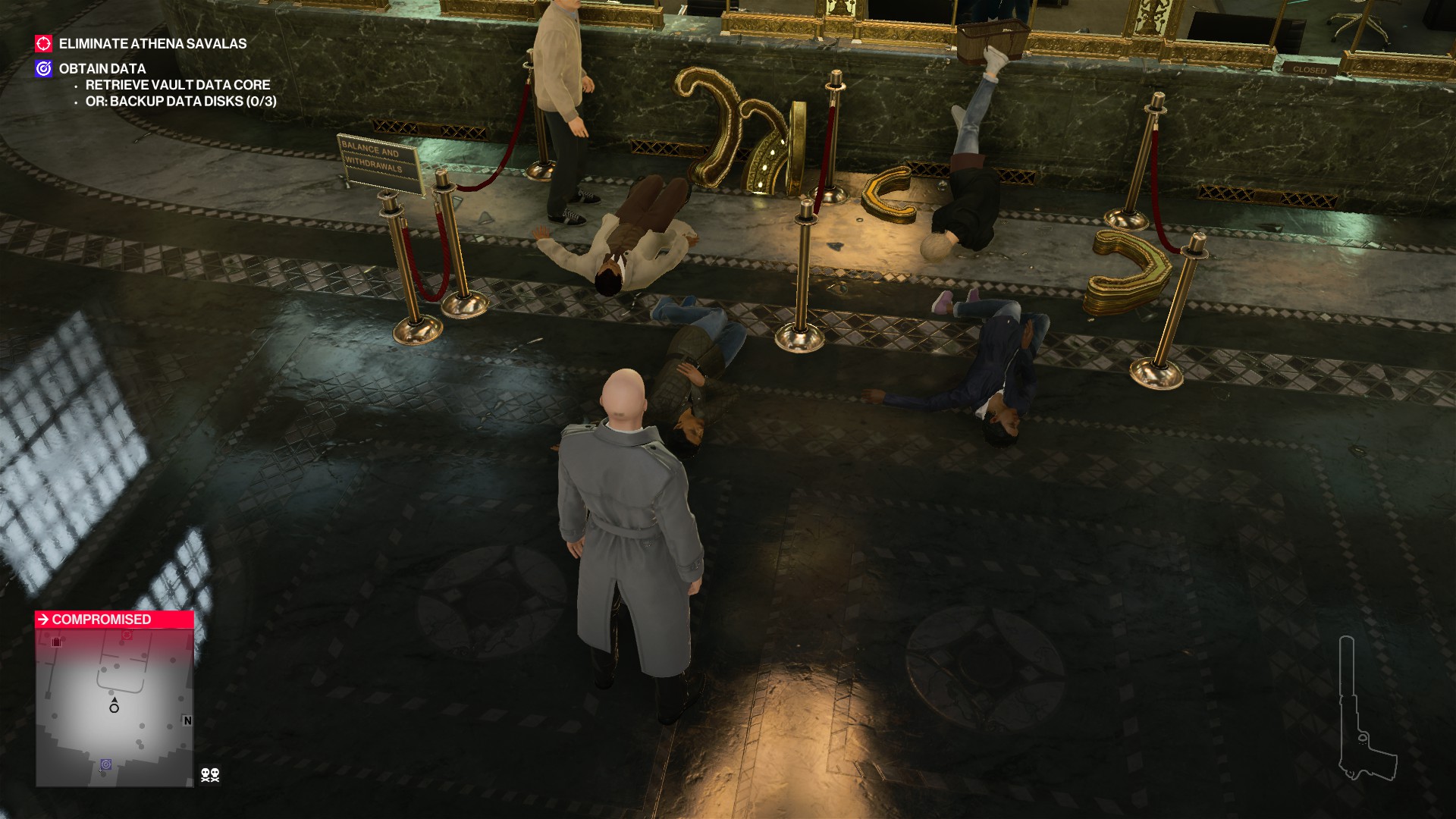