Bugger me, Paradox Interactive’s grand strategy games are a lot, right? If I could put that even more in bold, I would have fattened up like a sacrificial pig before god-appeasing slaughter, because they really are.

My experience with Crusader Kings II, for example, mainly involved me staring at menus for half an hour then crushing half a pack of ibuprofen into a fine powder, mixing it into a hot chocolate, and cradling it while rocking back and forth in a corner for the evening. I am, to put it lightly, not a bountiful well of expertise when it comes to these devilishly complex map-painters. Which is why I was pleasantly surprised to find that, about four hours into Imperator: Rome, the thing had got its wreath-decorated hooks well and truly into me.

“We worked a lot with the tooltips... you should be able to figure out everything by just looking. There’s a difference between intimidating and obstructing. We wanted to make a game where the player is not obstructed. We’re never going to make a game that’s not intimidating” 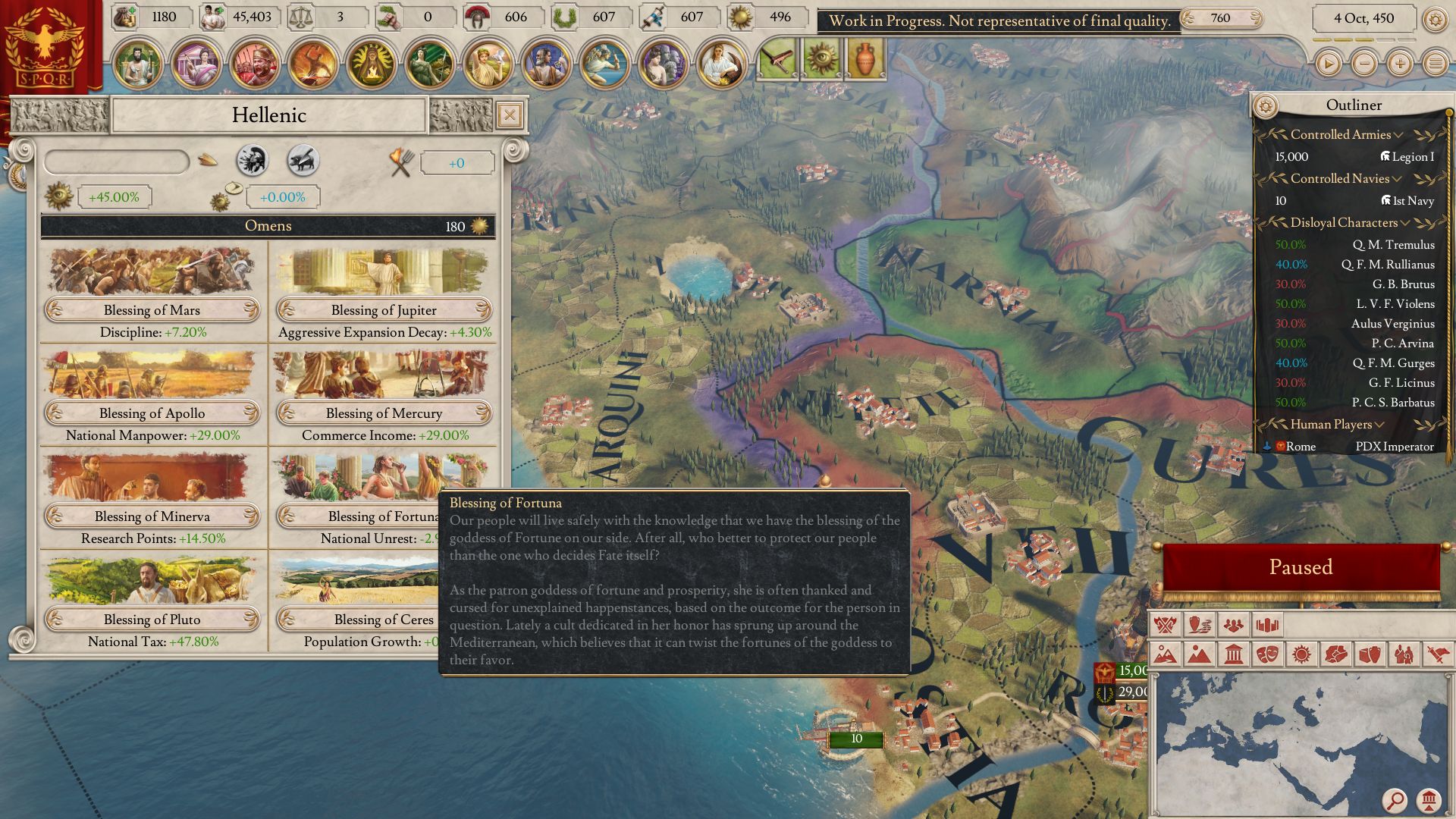 My play session starts, as do most great historical epics, by stabbing a pig to get people to like me again. I follow this up by genuflecting before the fickle goddess Fortuna, which my serfs seem to like. Keeping your various cohorts content is a hugely important task in Imperator: Rome. As well as an overall populace stability counter, an outliner sidebar keeps you informed which of your disloyal characters are currently sizing up your stately imperial arse with sharpened breadsticks.

“You have as much threat from within as you do from without. Whereas CK2 is a character focused game and Europa Universalis IV is a conquest focused game, what we’re trying to do with [Imperator: Rome] is meld the two,” Content designer Peter Nicholson tells me. “[You’ll] be able to have civil wars that really make you care about your nation.”

My underlings comfortably relaxed thanks to the sudden influx of soothing pig blood and vague omens, it was time to rally the troops, rally the boats, and finally, rally the fish, ensuring the republic was making good use of its available supply lines. The Sabini hill tribes to the North were begging for a solid annexing, and I’d need a military force to do so. 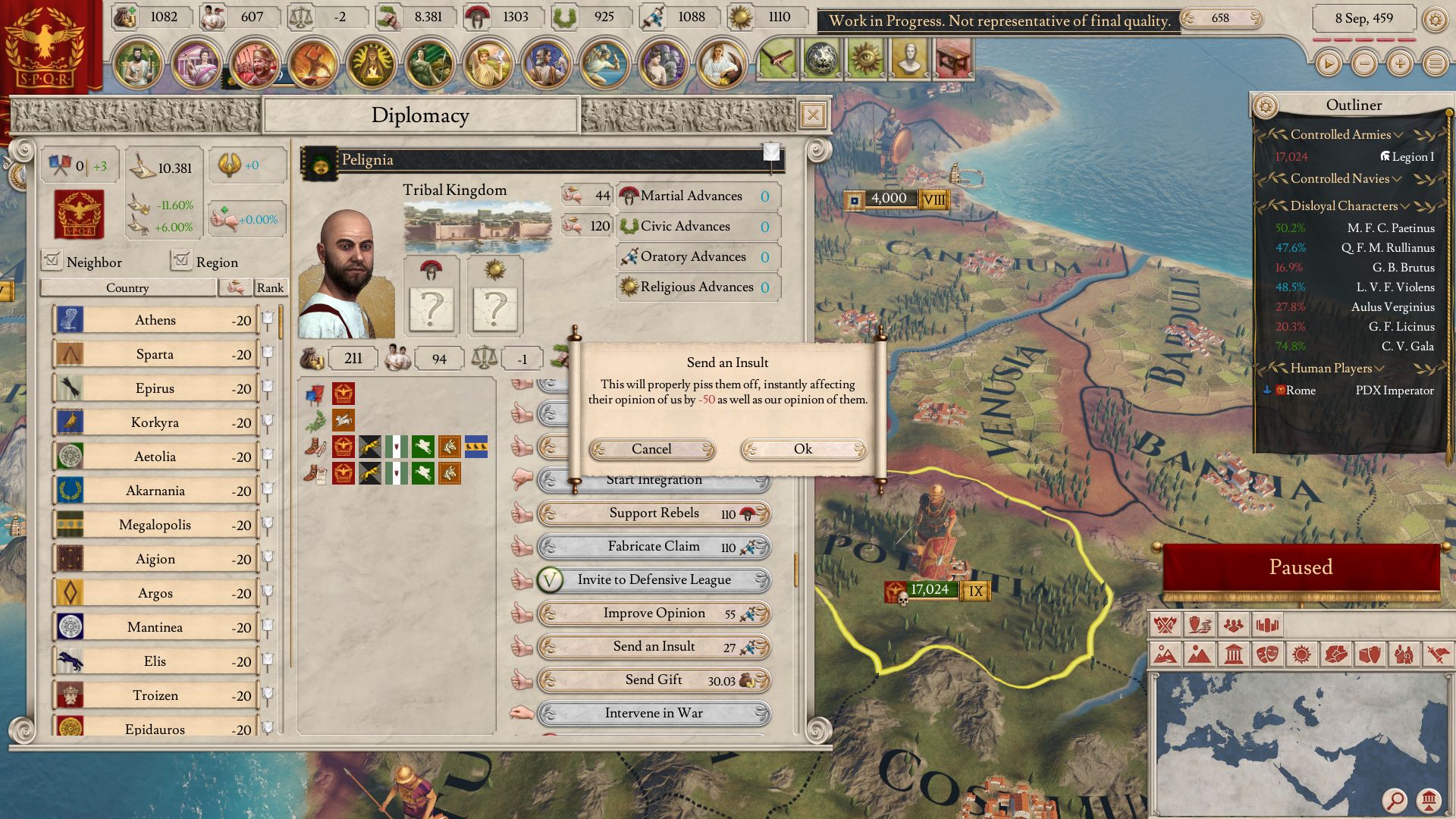 Next step was to fabricate a claim on their land to gain Casus Belli (basically forging some paperwork so I had a good reason to invade, ensuring my ever-vigilant populace were chill about it). Even with Casus Belli, playing as Rome means declarations of war require the senate’s go-ahead. For me, this meant I periodically had to fill it with a disproportionate number of salty warmongers before the stabbing could commence. Will this sort of gung-ho, decisive, sexily impulsive decision yield consequences later on? Almost certainly. But this is war, Gaius, and I’ll hear no more of your nay-saying. Onward!

What followed was a succession of bloody conflicts, as the history books like to say. Rome, of course, begins the game in a fairly strong starting position to enact violence on its neighbours. The asymmetry found across Imperator: Rome’s huge map means players will have wildly different experiences with different starts.

The aim is to give players “as intricate and historically informed as possible starting point” according to Nicholson. “The part that appeals to me is the asymmetry of the start. You can start as a tiny one province minor in Asia, or a huge hulking titan somewhere else.”

“It’s the most detailed map we’ve ever done,” content designer Henrik Lohmander tells me. “We have 7000 individual cities on this map.” For contrast, the smallest measure of territory in Europa Universalis IV was the province, of which there were 4000 in total. 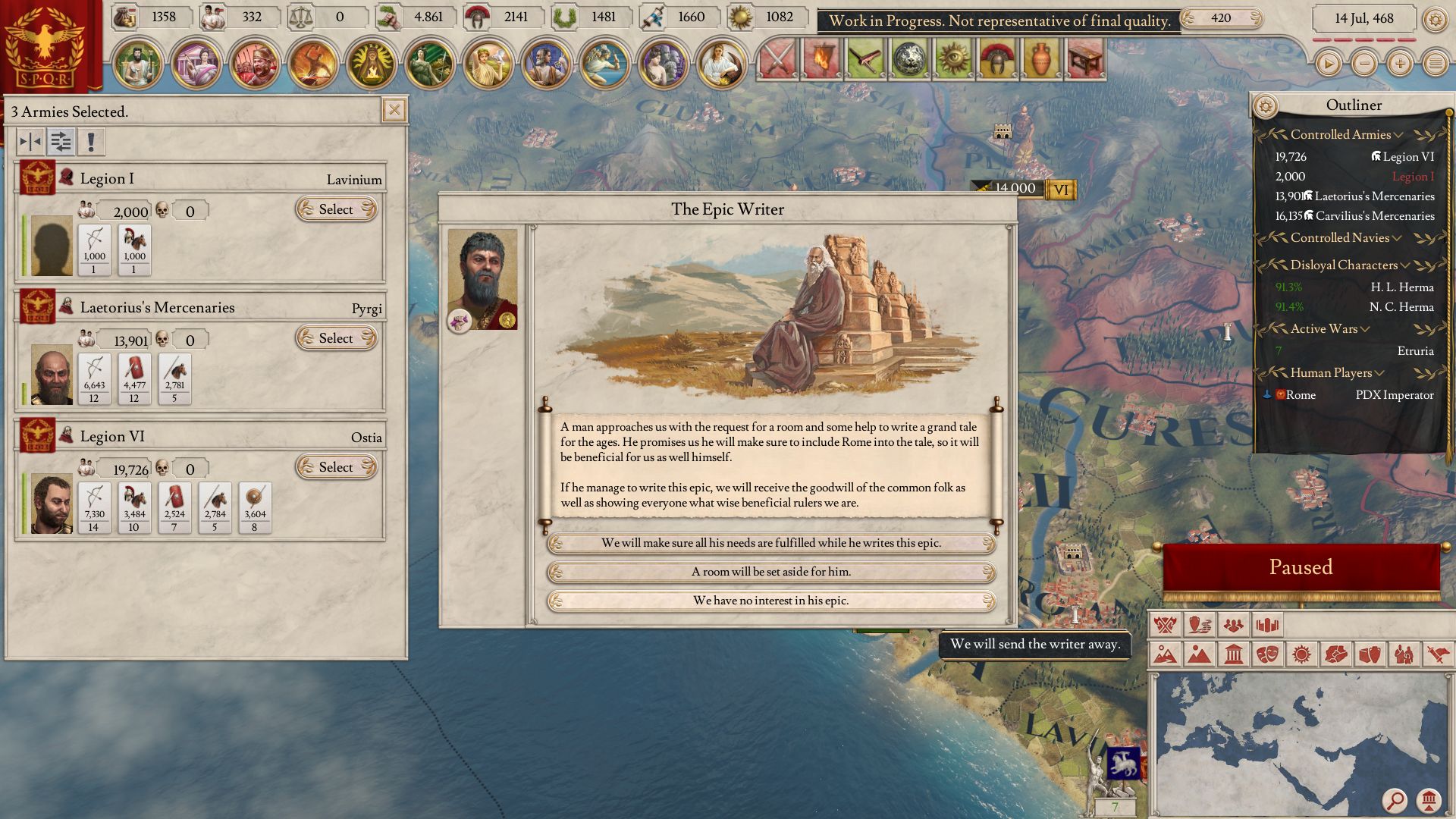 “If you’re playing as the Roman Republic you can experience a settled state, but also one that has a lot of rules to follow...or one of these big kingdoms in the east that are run in an ad hoc way, but you also have to keep in mind that people are going to judge you. But there are also states that aren’t really states, nomadic entities that can grow into being a bigger state, or stay as they are.”

Whichever start you choose, Paradox are keen to point out that the population diversity, alongside a huge roster of characters with individual ambitions, means the weight of every decision will be felt across your empire.

Lohmander tells me it gives new players everything. “The armies… the population… a map painter, but with actual people living.”

As a casual Stellaris player, the immediacy of the decision-making thrust upon you in Imperator: Rome is a big draw. Paradox’s dedication to history means players need to be mindful of their chosen culture, economy, map positioning, and various political entanglements from the minute the game stars. In place of Stellaris’ tantalising, revelatory slow burn is the feeling of Paradox throwing you the keys to an intricate array multifaceted machinery, and honestly, it's completely intoxicating. A lack of narrative railroading meant the direction of my empire always felt up to me, but frequent character events and political decisions offered an engaging framework for more personal storytelling. 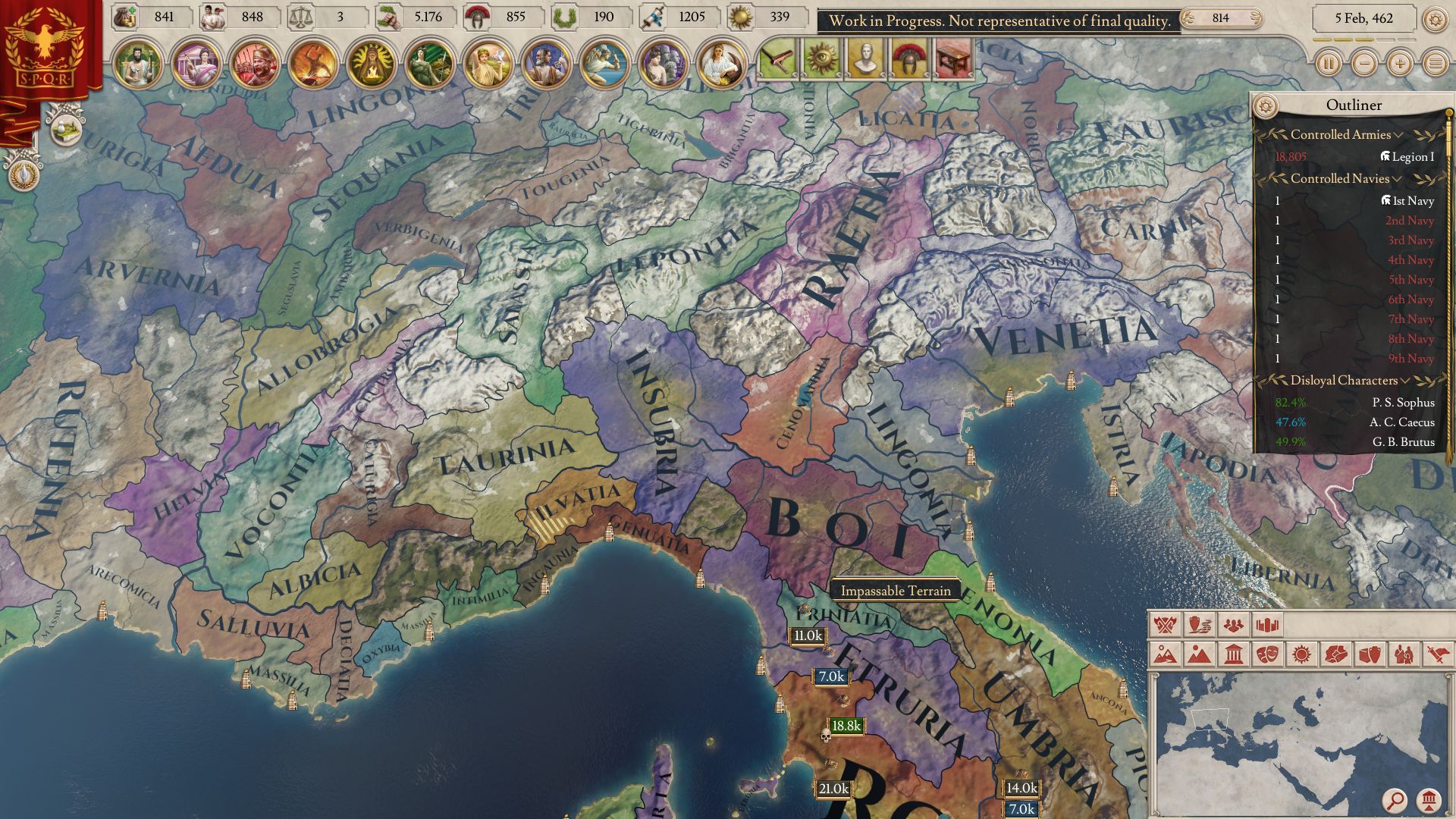 As for the fate of my empire? Look, I’m a simple man, amused by simple things, and the fact is, if you put me right under Gallic tribal territory named ‘Boi’ then it’s going to take every ounce of strength in my being not to immediately invade, shouting “Yeah Boi!” repeatedly while the fine folks at Paradox look on. Boi, it turned out, was not ready to be conquered. Rome was done.

At this point, however, I didn't even mind. I’d found my entry point to a genre I’d been wistfully gazing at from afar, like a lovesick dagger looking at a sexy pig. I walked in terrified, and I left itching to get my hands on Imperator: Rome when it drops sometime early next year. Et tu, Boi.