If you click on a link and make a purchase we may receive a small commission. Read our editorial policy.
Developer: New World Interactive
Publisher: Focus Home Interactive

I don’t know if I’m cut out for this. It pains me to write that. I’m RPS’s shooty boy, the kid with the crosshairs. I chomp M4A1 rounds for breakfast. But an average round of Insurgency: Sandstorm tends to chew me up instead, then squat over me while informing me about my poor life choices.

I think I’m having a good time?

The first thing I have to tell you about is the noise. Oh my word, the noise.

Drones, jamming sound waves down your spine like scalpels. Artillery that could shake continents, blanketing maps in smoke that sets infantry coughing, splutters that don’t drown out those of the dying. War is hell, and hell hath no fury like a helicopter gunship scorned.

Then there's the silence. Moments where you're alone, inching forward, glimpses of rolling debris and rotating ceiling fans setting your heart a flutter. False alarms, misfiring jolts of adrenaline that leave you too frazzled to respond when an enemy actually crosses your sights.

There’s a buzzword here I could dance around, but stuff it: above all else, Sandstorm is immersive. The HUD's only intrusions are objective markers and ally locations, and occasionally ammo counts if you hold down the button that lets you pat yourself down and check. The only way to tell if you've killed someone is to watch their corpse hit the ground, or listen out for the screams. 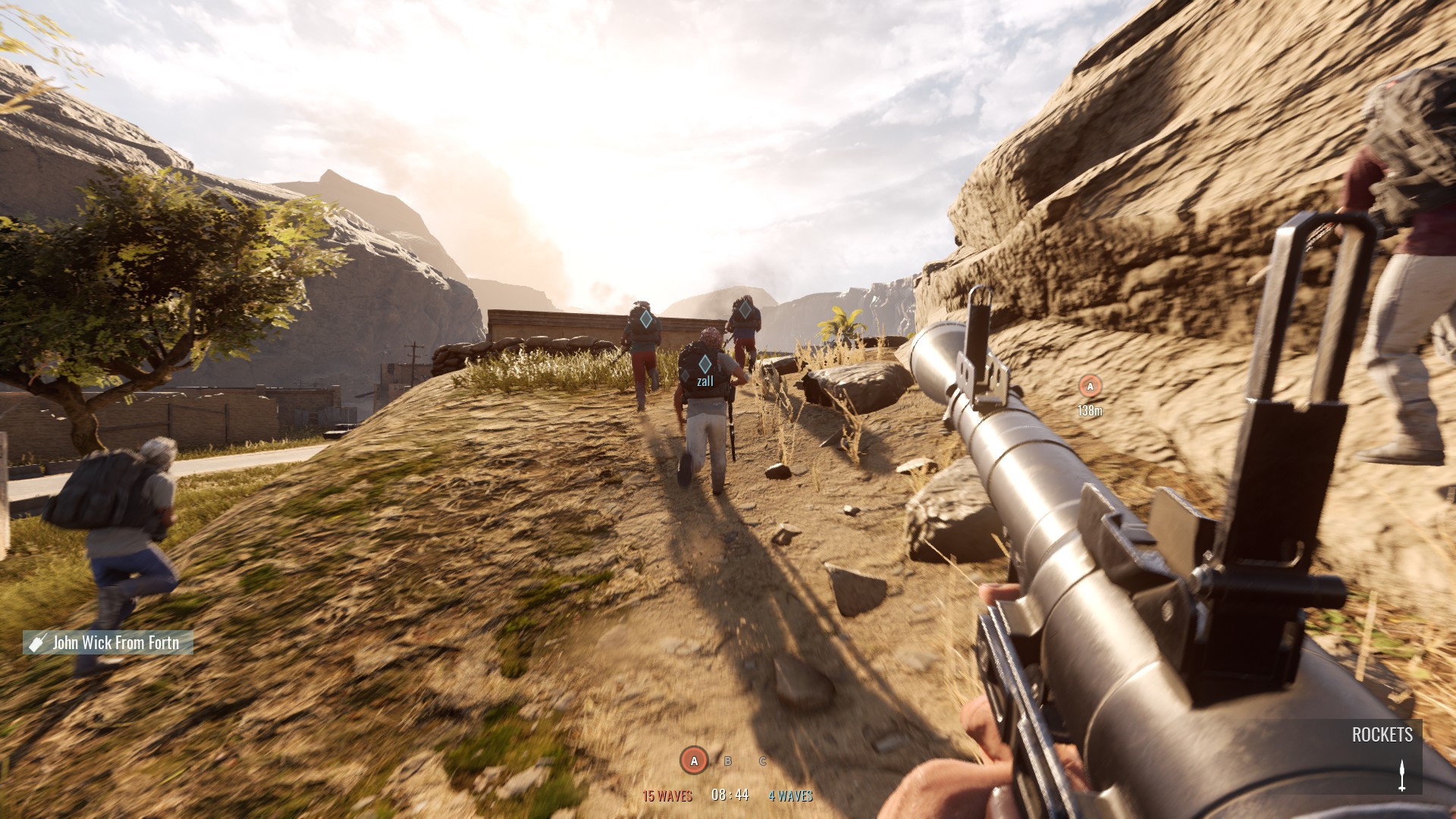 A good way of measuring immersion is to look at the distance I fling my real life head away from incoming fire. I do that no matter what game I'm playing, but it's normally just a little flinch. In Sandstorm, I've nearly fallen off my chair.

It's very much Red Orchestra by way of the Middle East. Fights need to be approached slowly, thoughtfully, with teammates at your side (and ideally in your ears). Plans need to be made, hostiles pinpointed, and the team that makes best use of their voice comms is probably going to win. That's especially true in the competitive mode, which whittles down 32 strong player counts to 5v5. The result lacks some of the spectacle I just described, but it's also where I've had most of my fun.

It's just more manageable. I appreciate that spectacle, but I don't appreciate being repeatedly picked off by one of 16 opponents I didn't have a hope of keeping track of. Death is sudden, and there always seems to be a sniper or an ambush from the angle I couldn't cover. With only five foes, though, getting caught out feels like it had more to do with my carelessness than the slings and bullets of outrageous misfortune. 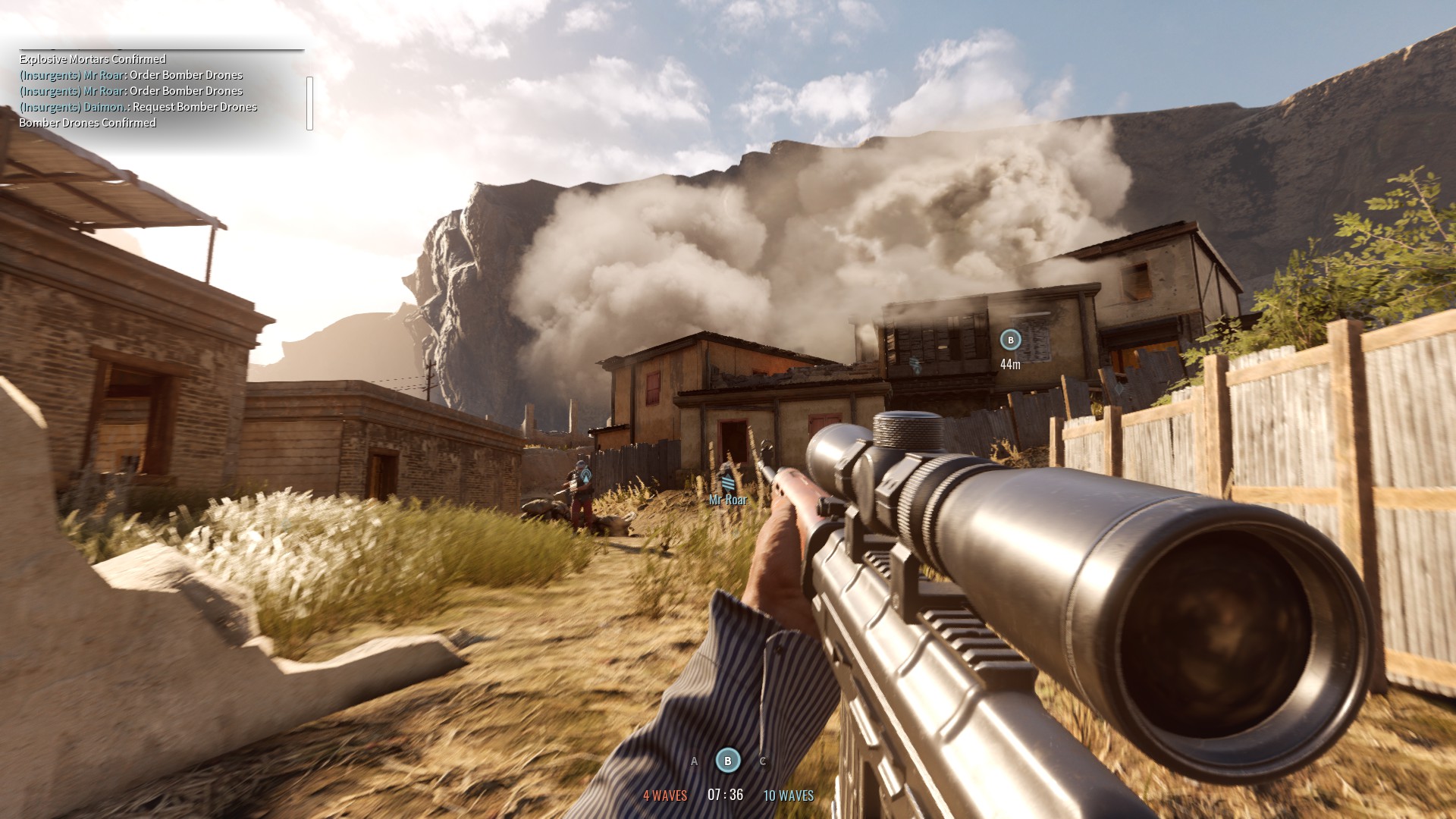 It's also the mode where you sometimes get to save the day and feel fantastic. I've done this precisely once.

The name is Firefight, and the game is to either capture all three objectives or eliminate the enemy team. Taking an objective lets your team respawn, which is where the heroism comes in. This isn't new. Counter-Strike, Rainbow Six: Siege and others all have the same terror and joy, but being the last survivor means having four sets of eyes trained on your every move, four humans rooting for your success. Winning is ecstasy, failure sorrow.

I rarely feel more focused than in those situations. In general, I mean, not just in videogames. When I hear the shuffling of hostiles just metres away, or catch sight of a telltale blur. When I creep around a corner, itching to check behind me but knowing it's better to look forward. When I bumslide into a room from the last door its defenders' expected, and take out two before the third knows what's happened.

I wouldn't feel that way if it wasn't for the weightiness of the weapons, which is where we circle back to the sound design. Not only do they thrum and kick just so, developers New World Interactive have nailed that little clicking noise that guns (presumably) make when you change the firing mode. It's exquisite. 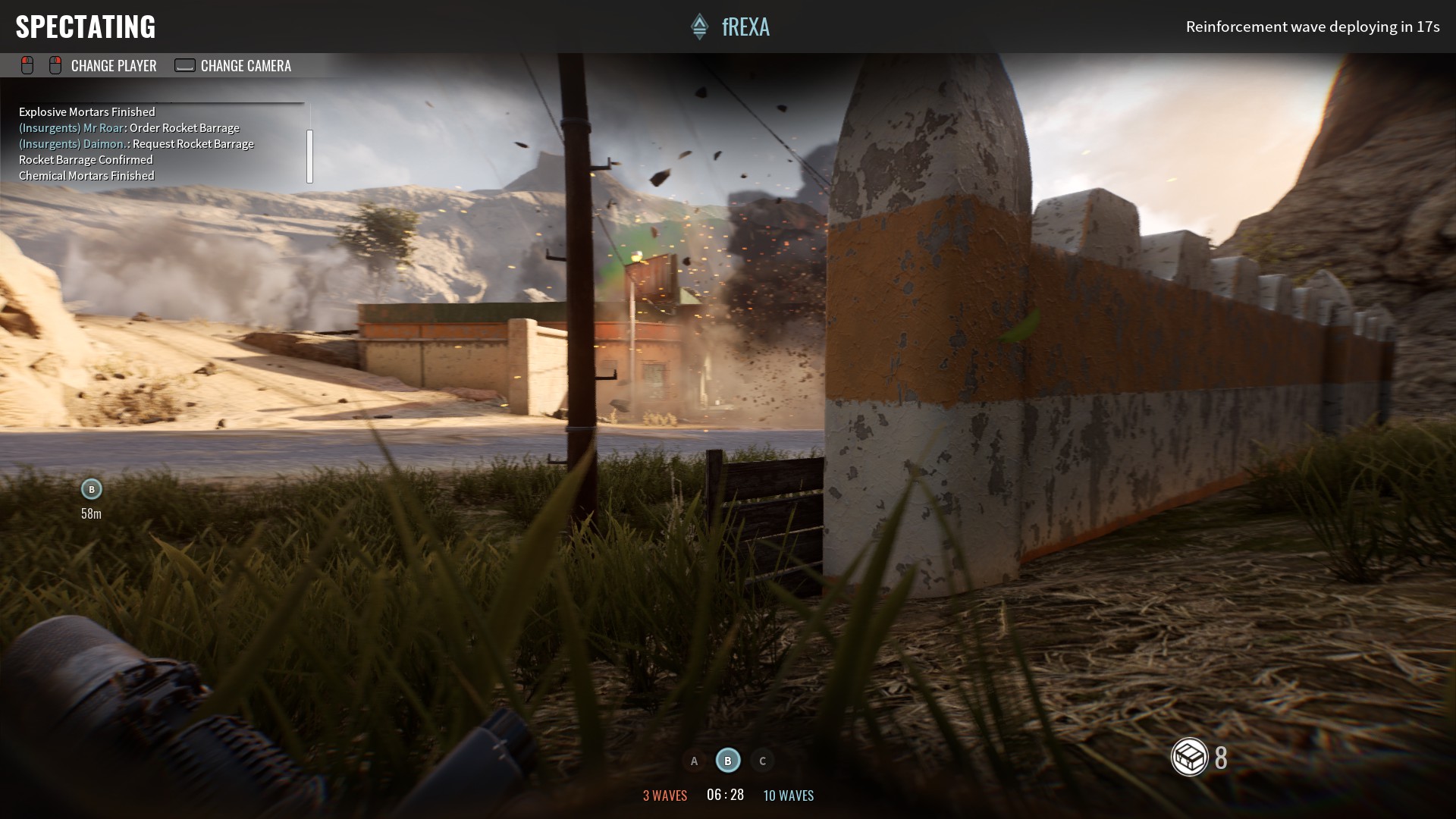 I like a good panic, and quivering under hails of gunfire is a cracking way to get a hit. Hot lead pinging inches from your head, rattling through car doors, clanging off roofs. You know a shooter is good when it's got me describing something as commonplace as bullets hitting metal.

The competitive mode rarely gets as hectic as that, and it's missing another feature I like. There's a class system that grants access to different weapons. In the case of the commander and the observer, special abilities. Those two work in tandem, the commander marking out spots to deploy ordnance so the observer can call them in. They're responsible for most of the explosions.

It's a shame that the maps are drab, which to some extent is an unfortunate consequence of setting anything in the real world. Still, I think we could have visited some more exciting places - I'd have taken almost anywhere over plain old construction sites and city streets. Sometimes it's a bit sunny and one map has some nice trees, but I spent most of my time staring at concrete, dust and sand. 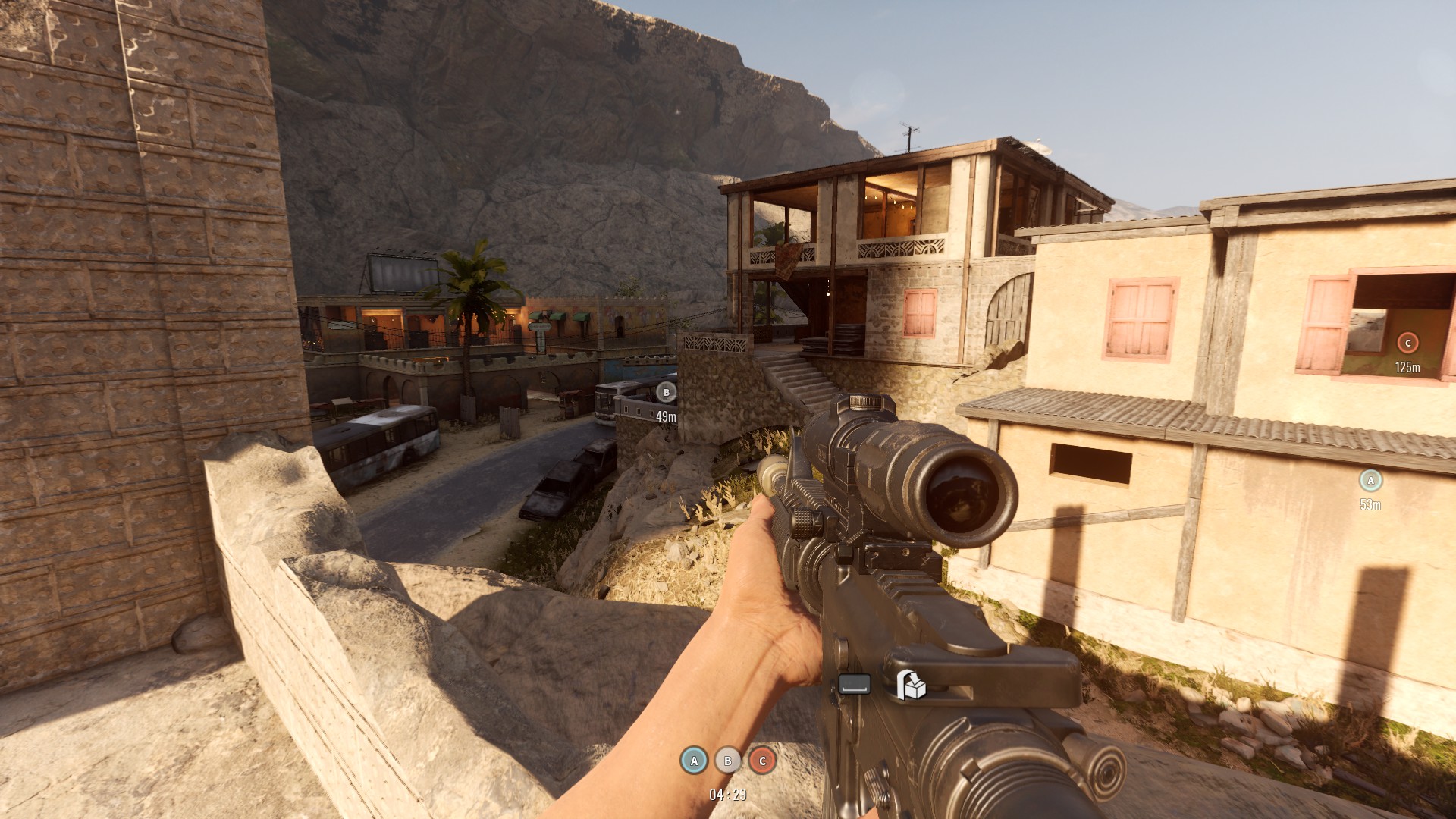 The AI-hunting mode isn't my bag either, with enemies that are all too easy to deal with. I've seen 'em funnel through doorways and gaps one after the other, their heads each popping in turn. It's a shooting gallery that lacks the tension of PvP - and most PvP modes lack the tension of the competitive Firefight. There's a version of the same mode in the casual queue, but it involves too much waiting around. There are two other modes: Push, where one team defends a series of capture points, and Skirmish, where each team tries to blow up the other’s supplies. But conquering either of their objectives doesn't yield the same satisfaction as Firefight's. Forcing you to earn your respawns makes you feel less disposable, your actions more considered. You're not a cog, you're a god damn piston.

It's sad that Firefight lacks fireworks and the other modes lack tension, but I suppose that's me wanting to have my cake and eat it. I could say the same about how punishing it feels: my few shining moments only burn so bright because I've spent so long in the dirt. 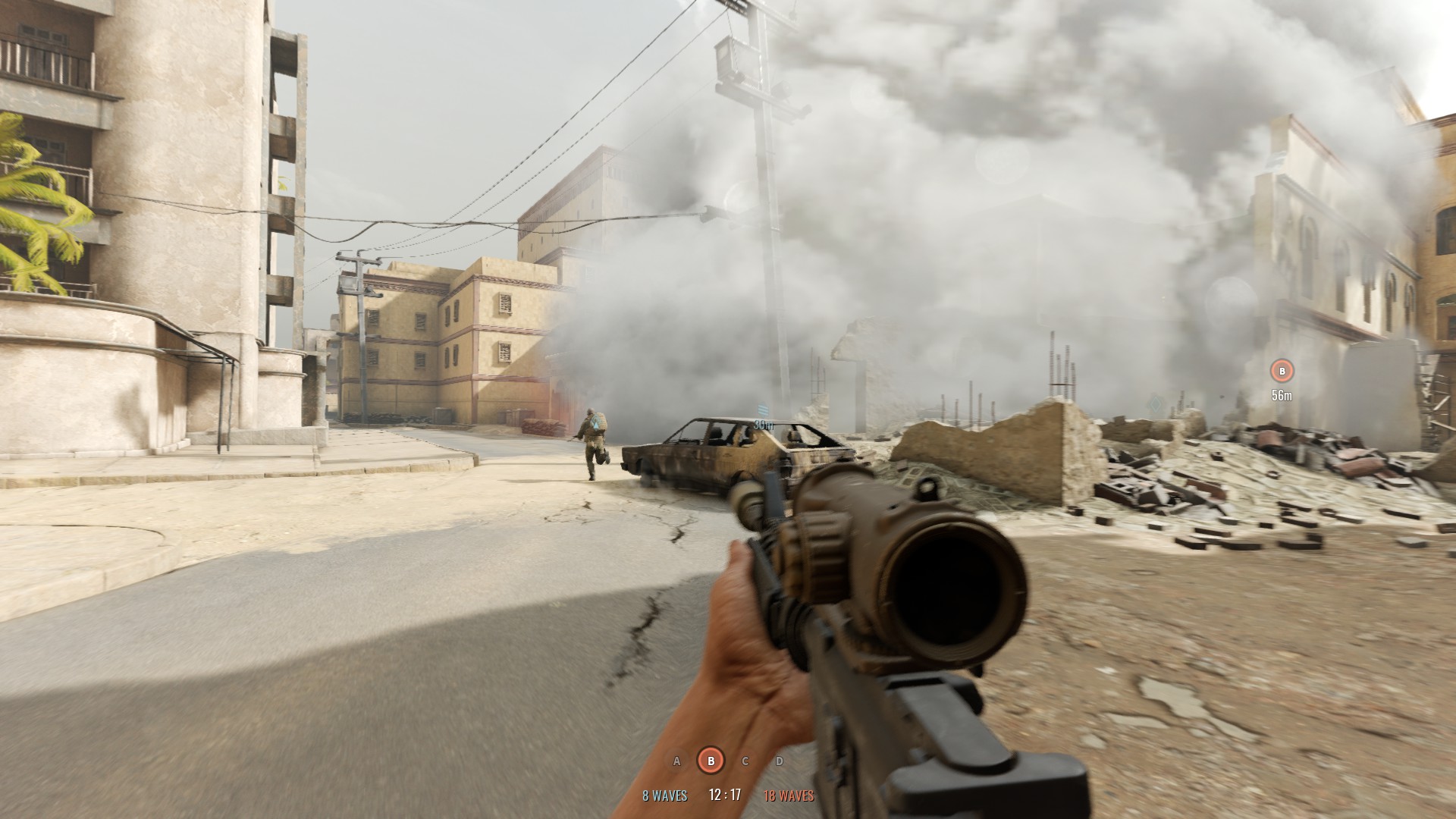 Thing is, the dirt's getting kind of old. I know I'm never going to play enough for the good times to outnumber the bad. Certainly not compared to dedicated players, who already dominate the servers. Ultimately, I've only got so much patience for games where the victor is nearly always whoever doesn't get spotted first. There's a reason I haven't played Plunkbat in months. If you're into your realism though (or just good noises) Insurgency: Sandstorm is worth a shout.