A lot of people first discover this Pulitzer Prize-winning* column via the Steam pages for their favourite games, and it's always a pleasure to welcome in new readers to RPS's most respected feature. So if you're new, welcome! Please settle in and find out why Steam Charts is the industry's most respected and revered games journalism. 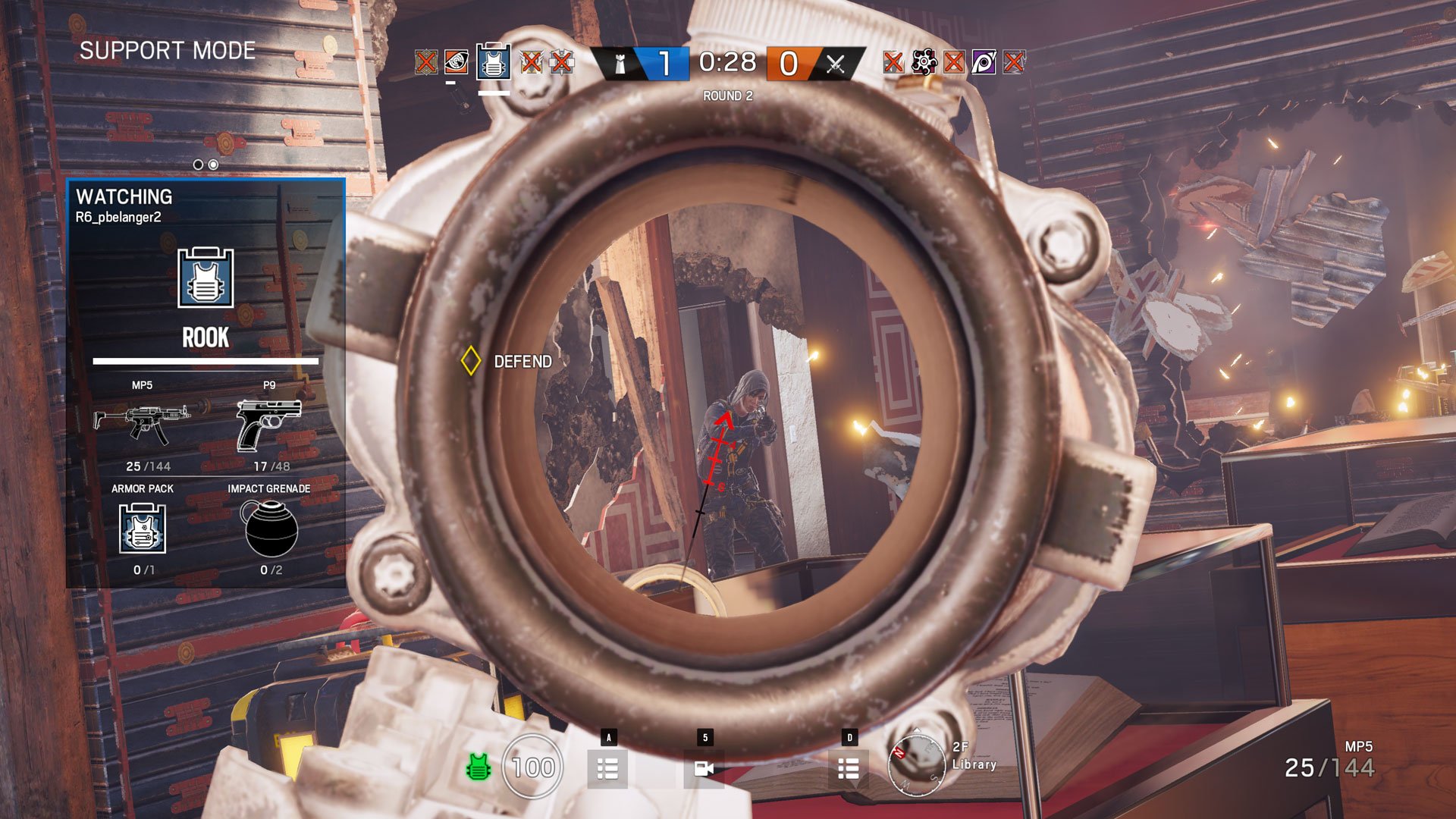 I think the most important piece of information to pass on about the octopus, of any of its many species, is that it really ought to be the dominant creature on the planet. But for one tiny flaw. It doesn't teach its young.

It's actually incredibly tragic. Because female octopuses have evolved to sacrifice themselves to protect their eggs, and males tend to die during or shortly after mating, these most exceptionally intelligent creatures - who put chimps to shame when it comes to unfamiliar problem solving - start from scratch with every new generation. There's no learned knowledge, nothing taught. Which makes their fierce smarts all the more extraordinary, if woefully hindered. Just imagine. If they could only rear their young, they'd be totally running the planet right now.

Even something as vast and wondrous as the giant pacific octopus (50-ish KG, 6m radius) only lives four years. And they're the elderly of the order. For reproduction, the males drop off a metre-long spermatophore in the female via his third arm which doubles up as a penis, and then enter a phase called senescence. Which basically means they stop eating and either starve to death or get eaten. Females do the same, but slightly more usefully, laying their hundreds of thousands (!) of eggs in a little rocky crevice, then blocking the entrance with their bodies, and blowing water over the eggs to care for them for many months until they're ready to hatch. Then they move out of the way, and die of starvation, while the teeny babies swim free. 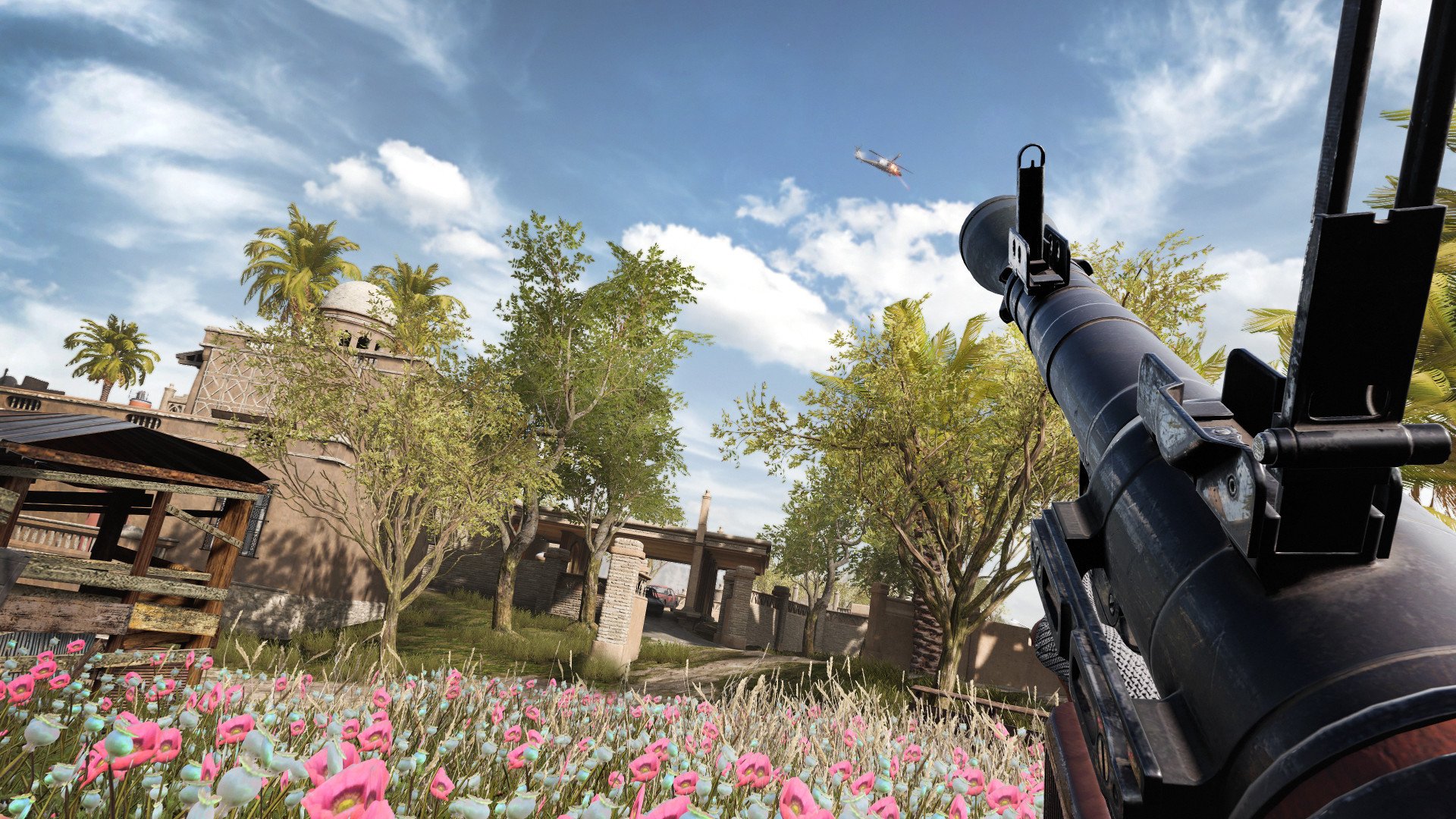 Talking of octopus evolution, that's a WHOLE THING. Along with octo-cousins, squids and cuttlefish, the coleoid cephalopod gang appear to have split from pretty much every other living creature on Earth in the evolutionary path they took. Which is seen in how they live-edit their RNA.

Most species make genetic changes through DNA, but this sliver of the mollusc faction have persisted with also RNA-editing hundreds of millions of years after everything else gave it up. Which means they can adjust how they construct proteins on the fly, adapting to changes in conditions. Apparently the genetic price they pay is a slower pace of evolution, but the win is their intelligence. It's theorised that this incredible deviation from the rest of the planet is the means by which they've developed their abilities to camouflage, use tools, and communicate with one another. 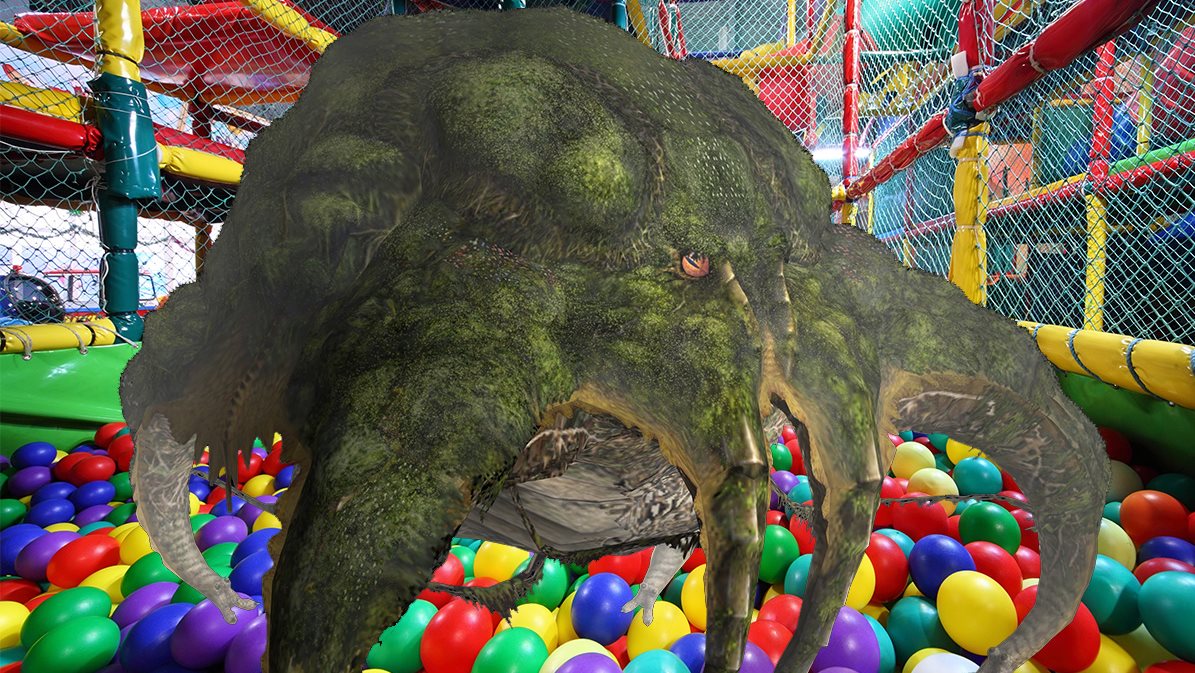 Monster Hunter: World has yet to feature an octopus monster. But fear not, it has Yama Tsukami in the series' canon, and above is an official screenshot I've managed to have leaked from a forthcoming unannounced expansion. So with a world exclusive, here is the first guide for how to defeat Yama Tsukami in Monster Hunter World.

Yama Tsukami cannot be defeated. It's fruitless to try.

Yama Tsukami has no weaknesses. Other than chocolate!!!!111one. No seriously, it's impossible to beat. In the expansion, which adds the long-expected soft play areas to the game, Yama Tsukami simply devours all the children while you're helpless to watch.

How to fight Yama Tsukami

You could technically try fighting Yama Tsukami, but it would be like hitting an angry concrete wall with a used cotton bud. Yama Tsukami will kill us all. There is no hope, beyond your pitiful attempts at worship. All hail our new overlord, Yama Tsukami. 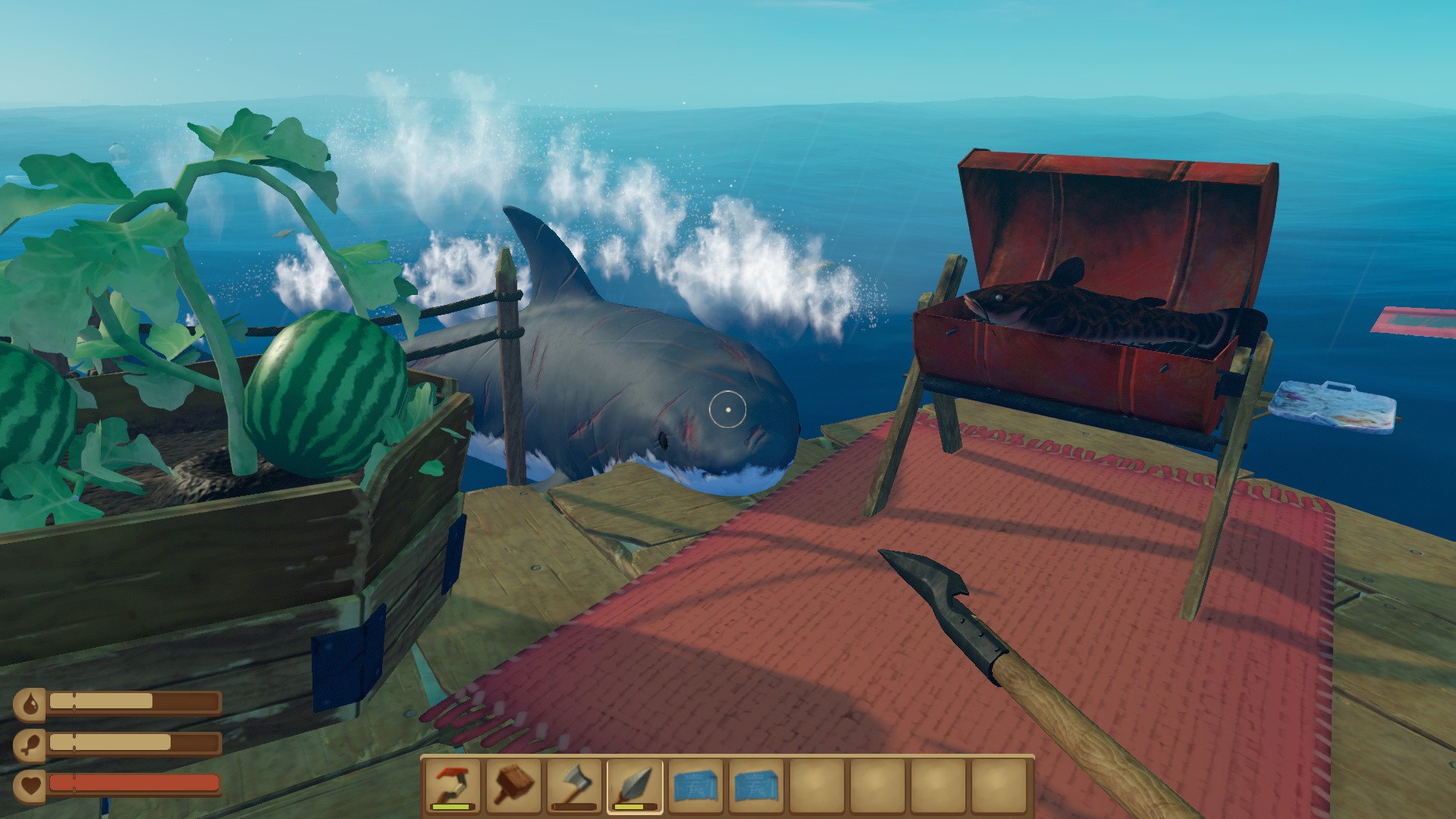 Despite adding puffer fish, warthogs, even llamas, Raft has yet to add octopuses to its mix. BAD RAFT.

But instead I'll take this opportunity to observe that, yes, it is "octopuses", and not "octopi" as you may have been told. That's simply incorrect, and exclusively used by people who think they're sounding clever when they're actually sounding like idioti. 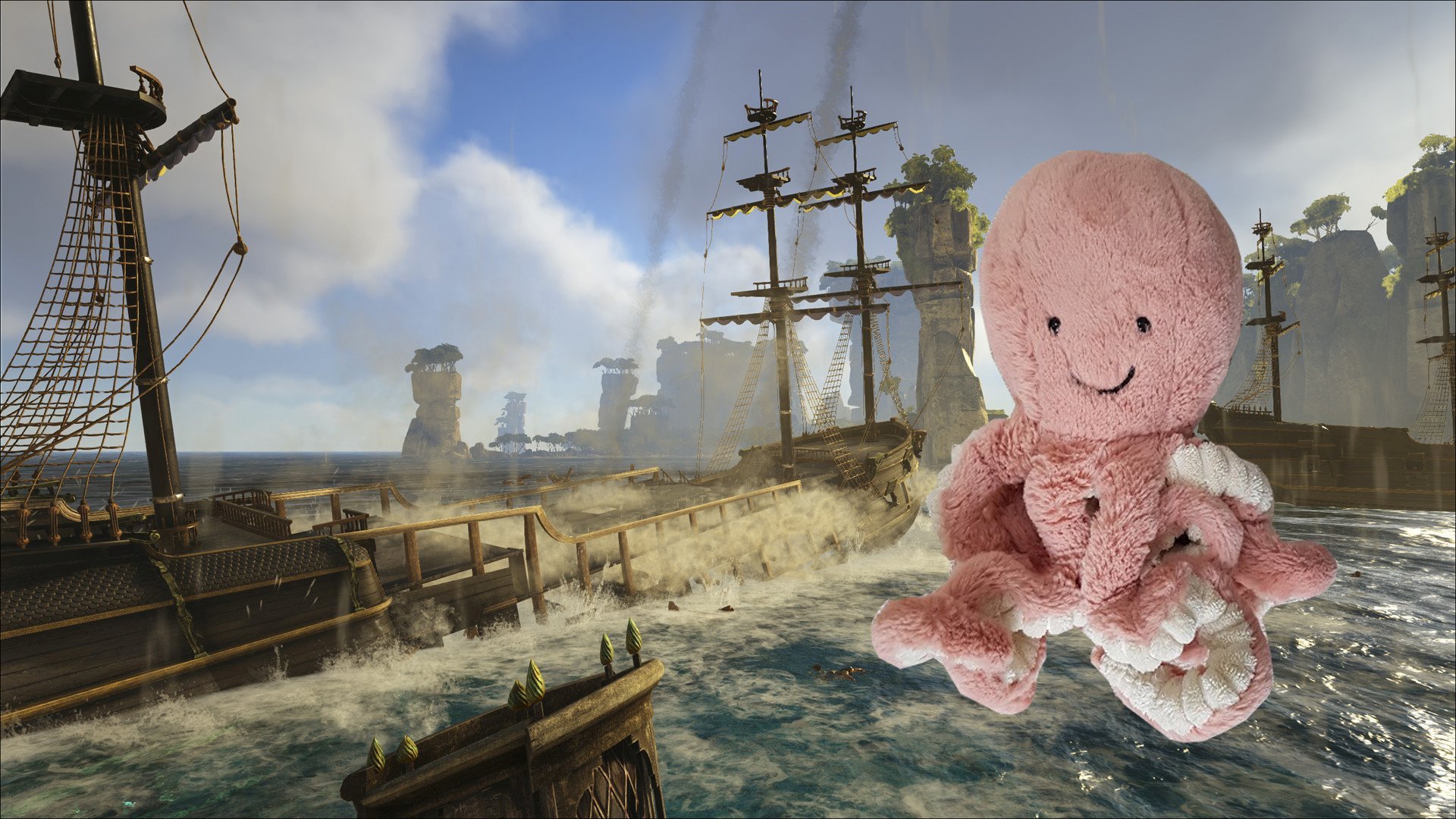 Octopuses can see with their skin.

Sure, that's somewhat pushing the definition of "see", but their skin can detect light levels and respond accordingly, and really, seeing is just an exaggerated version of the same.

I love that octopuses are so bloody amazing that how they change their colour to match their environment is the headline, because everyone already just takes it for granted that they can. Can you? I mean, I can change my clothes to match the colours that remain in my wardrobe, but that's not quite as impressive.

So it is that in 2015 it was discovered that while the octo-brain is certainly sending colour information to its pigment cells, the skin is taking part too. They found out by cutting some off, and noticing that it carried on responding to its environment. Which is fascinating, but bad news for those scientists when the octopuses come back for their revenge. 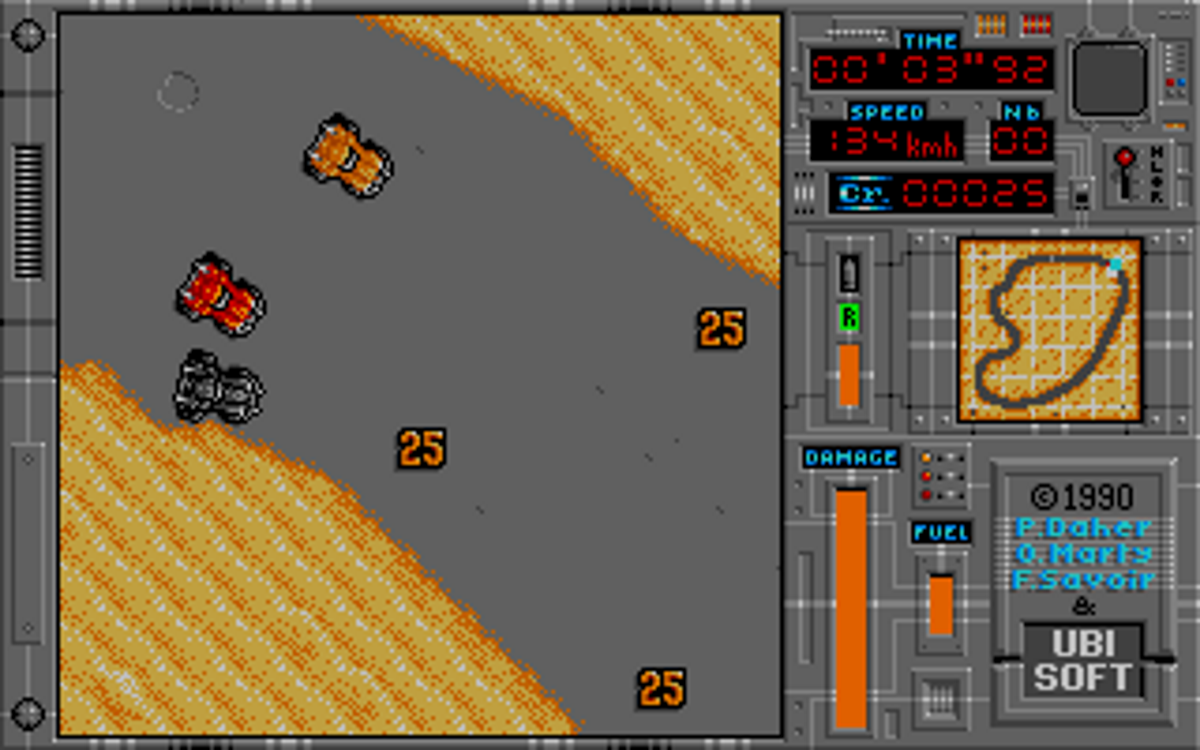 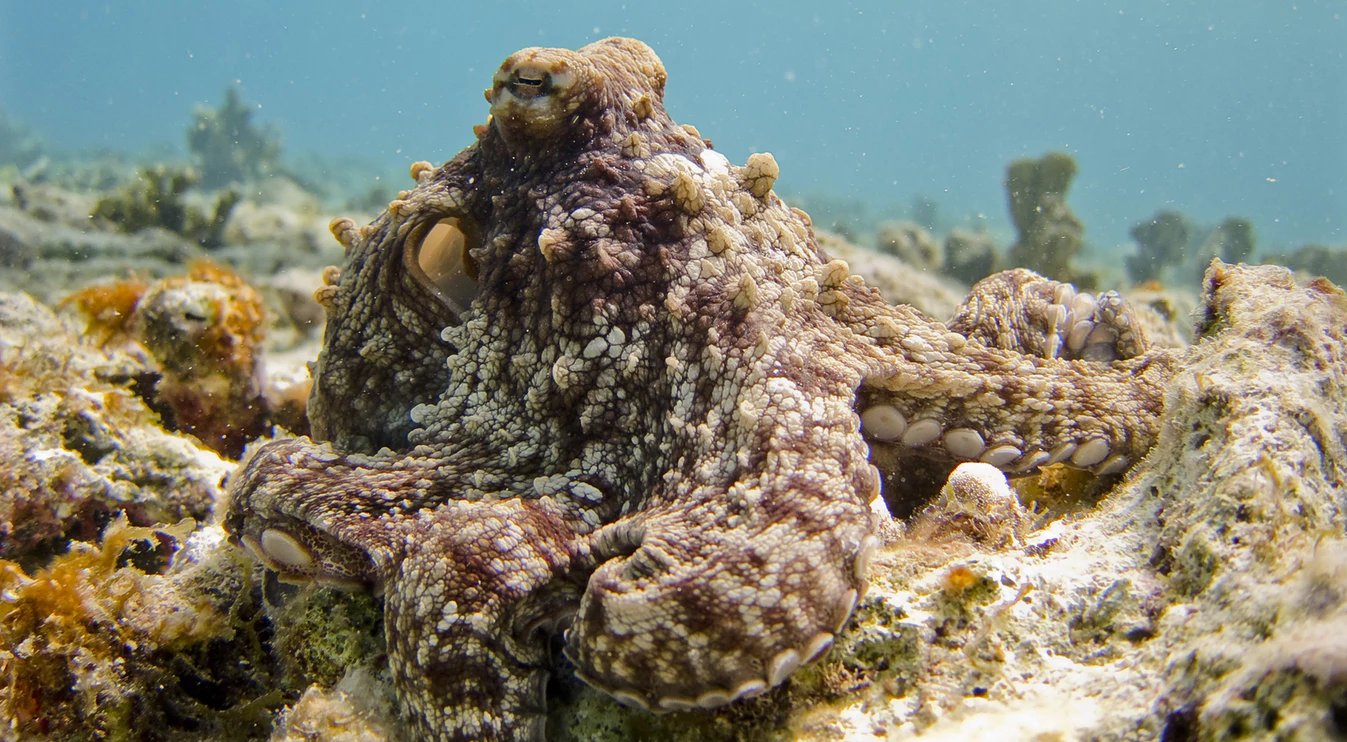 Octopuses sort of have nine brains. I wish I were a less honest man, the sort who could sensationally declare "THEY HAVE NINE BRAINS!" and just wow you out of your pyjamas. But they don't.

They DO have three hearts. One for basic circulation, the two others to pump blood through its gills. But they really only have one true brain. And then another eight bundles of neurons in each arm. In fact, the majority of its neurons are in its arms, compared to its big, wobbly head. Each arm, in fact, can operate independently of the main brain, able to touch, taste and move on its own.

And yes, they're "arms", not "tentacles". Stop calling them tentacles. Squid have tentacles, but two of them, alongside their eight arms. Tentacles have peduncles, you see. And none of them is a leg. 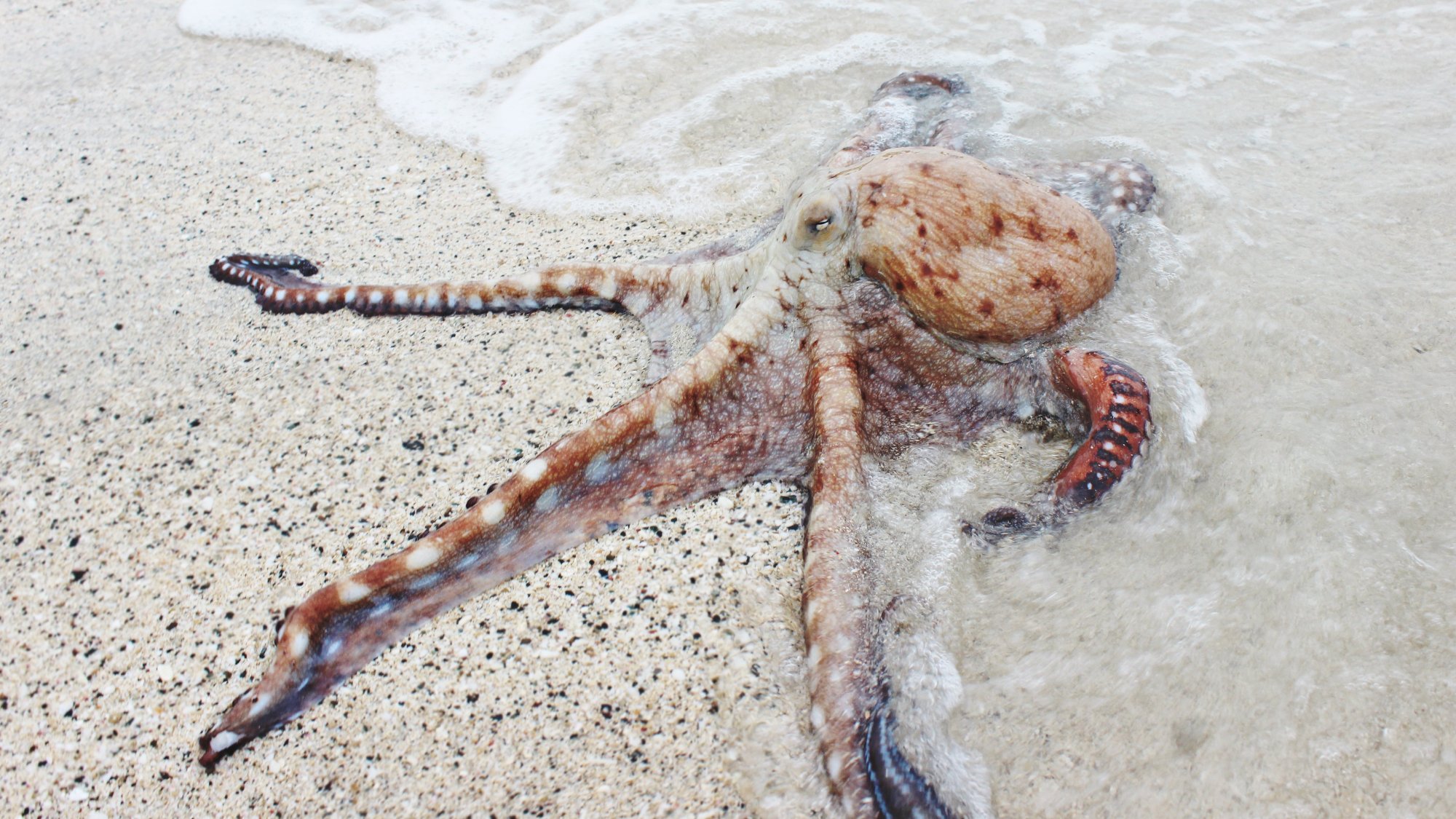 "OK, sure John," you've been saying. "Octopuses are way cooler than I'd thought, and frighteningly clever, but here's the thing: They're trapped in the sea!" Oh, poor foolish reader. No, no they're not. They can hunt on land.

Using "passive diffusion" they can carry on absorbing oxygen through their skin, so long as they're wet. Yeah - that skin that can sort-of see can also sort-of breathe. They're often observed crossing dry land to reach other bodies of water, that they impossibly know will be there. Or indeed use this skill to perform fabulous break-outs from aquariums.

They will kill us all.

Admittedly deviating from the topic, this week I've been suddenly reminded of a favourite band, 13 & God. A super-group of anticon musicians, made up of Themselves and Notwist, they made two albums. This is Ghostwork:

*If you put an asterisk next to a lie, it's morally fine.