Did you win outright, for all four islands and without a single lost building the first ever time you played Into The Breach? No? Well, did you play again afterwards? If you did, you're the most genocidal maniac humanity has ever known.

I've spent at least two sleepless nights trying to get my head around the moral implications of Into The Breach's time travel. There's been a great deal of talk, including in my own Into The Breach review, about its faultless tactical elegance and razor-sharp design, but not much about its plot - which is quite likely down to the deft minimalism with which it's told. Almost nothing happens outside of brief lines of dialogue in which every character involved seems to totally know the score or already, and it's presumed that you, the unseen mech commander, do too.

But, during play, short comments create dark implications that spread backwards through your past attempts at the game like a stain. The scattered remnants of an already-decimated future humanity are threatened by the Vek, giant alien bugs from God knows where, and their only hope lies with an even smaller group of human survivors from an unspecified further future.

So coy is Into The Breach about details that I'm not even sure I've got that right. Are the mechs from the far future, or are they from mere moments after the Earth fell, making a last-ditch jump to a few short hours earlier in the hope of preventing it? The game is admirably light on hard facts in this regard, which I will take over an earful of exposition any day. It makes me hungry to know more, in a way getting lectured by Professor Ian Science about exactly what was going on never could.

The truth is, however, that it simply doesn't matter exactly when or where the mechs hail from. What matters is the untold tragedy caused every time they time-travel. One thing the game does tell us as a hard fact - uttered by either your pilots of the CEOs who govern each island at the conclusion of a campaign, whether you won or lost - is that every time you 'jump', you abandon the timeline you're in and move to a new one. You're not simply moving back and forth through history, but also laterally, across what would be infinite new realities - every time you move back through time, your own changes to it cause it to fork off into a parallel, rather than replacement, reality.

In terms of hooking the inherent suspension of disbelief involved in replaying or reloading a videogame, it's an absolute doozy - a built-in excuse to try again, and again, and again, to escape the tyranny of the Game Over screen and instead combine your every experience of the game into one contiguous tale. But by God there is a darkness to it.

This is a game about saving thousands, even millions, of lives. The dark irony is that, every time you move to a new timeline by rewinding the clock, you effectively create a new copy of the human race who are, given the game's thoughtful difficulty, more than likely doomed to suffer horribly at alien hands/mandibles. You create life in order to see it destroyed. Though, naturally, we start each new ITB campaign convinced that we'll get it right this time. You are toying with an infinite number of lives for your own entertainment. You're a god-damned monster, far worse than the Vek.

There's also the thorny matter of abandonment. Fail a campaign and, on top of hundreds of thousand perishing because of all the buildings you failed to save from the bugs, you leave the entire timeline behind to die in favour of a do-over in another one. The CEOs will occasionally address this head-on, glumly accepting their fate by trying to take thin succour from the idea that a parallel them might live. It is cold comfort. I know that I have failed these people, and creating a brand new timeline with brand new copies of them is only for my benefit, not for theirs.

I'll feel proud if I succeed next time around, but these people wouldn't even exist if I hadn't failed to save the last version of them, so what does it actually count for? Every new time I choose to play, I am embarking on absurdly high-stakes, wide-scale sadistic gambling, wanting to prove something to myself at the expense of lives that don't even exist unless I make the express decision to create and then willfully endanger them. 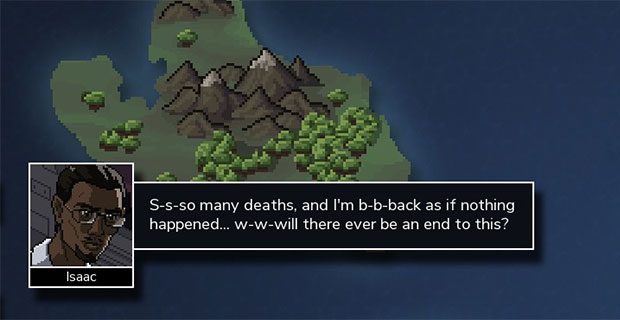 Your monstrosity is at its absolute height if you choose to play again after a success, particularly a four-island victory in which you've most likely saved the vast majority of possible lives in that timeline. You're not playing again to save more people. You're giving it a go again, because... Well, because you want to play the brilliant videogame again, and perhaps you've unlocked a new mech squad or pilot that you want to try out, or perhaps you're hoping to unlock another one still.

There are few feints made towards the idea that, doing it all again with the accumulated knowledge of your past experiences, you might be able to save even more lives this time around, but it doesn't change this dark element of creating lives in order to then put them in peril. (You're also depriving the survivors of the successful timeline of your presumably much-needed help in the rebuild effort, but there we venture once again into the wild woods of when, exactly, the mechs and their pilots come from, and whether or not the timeline has its own contemporaneous fleet of mechs up in the sky somewhere). 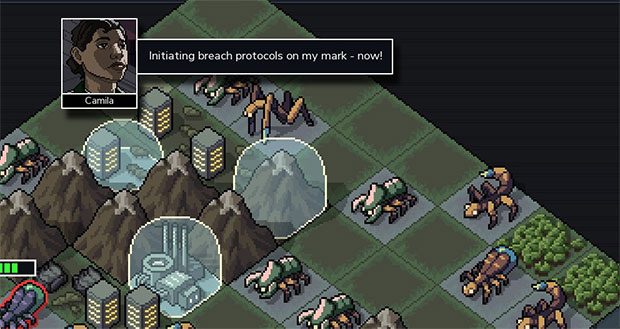 And, holy god, the abyssal implications of using the 'reset turn' button you're allowed to press once per battle. It scans like a simple rewind, but going on ITB's scant time-rules, what's really happening is you jump backwards by a few minutes and then proceed down a slightly different path than before, thus creating yet another time-fork and leaving the one you'd just been trying to save entirely unprotected. "I damn you all because I didn't like my mistake" is the message.

This is one reason why I've stopped using the pilot Isaac Jones, with his magical two-reset special ability. I'm doubling up the horror if I do. (The other reason is that I've gotten much better at the game, which means a) I need resets less often and b) I now know how to take full advantage of the more tactical, non-time-wimey special abilities of other pilots). Every time I failed, every time I reset, and even every time I won, my hands became soaked in newly-created blood I can never wash off. 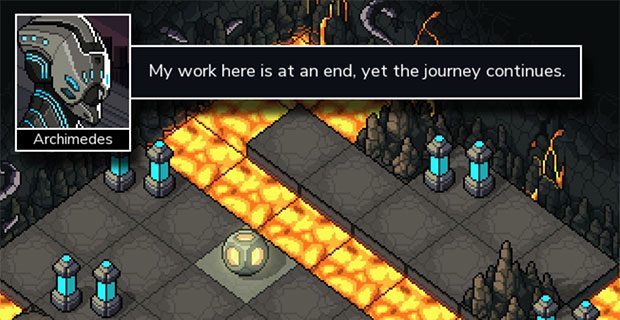 Don't let me be misunderstood: I think all of this is brilliant. It's brilliant because it's causing me to hesitate, and analyse, and feel terrible remorse, and unlike those vast legions of emotionally-manipulative texts in popular entertainment it's doing all that without ever telling me to. It's also driving me to pursue perfection not for bragging rights or unlocks, but because of how guilt-stricken I feel every time a building falls, and all those lives are lost with it, and it's my fault, and I can never bring them back no matter how much I try to be Sam Beckett.

And, when you 'return' to the future and choose old allies to join you for your next attempt, what you've actually done is spawn new copies of them, who you may then cause to die or also face exile to the apocalypse. On the other hand, when you jump on from a successful campaign/timeline, the other two pilots are presumably being rewarded with a lifetime of peace while you and your lead pilot are doomed to endless war.

Some of the pilots make occasional references to allegiances or family or anxieties from earlier in their lives. The truth is that none of the people they care about are ever accessible to them any more, not as soon as they move to a new timeline for the first time. Is their complicity in birthing endless parallel timelines containing perfect copies of those lost and very probably dead people a noble act, or is it ongoing genocide in the name of self-indulgence?

My head has been polluted with these worries for days now, and the mounting sense that, every time I play, I become more monstrous. Bar an occasional one-line aside from a pilot, the game's few words did not ask that I feel that way. I love it for it.