I am an ambulatory shoebox. Nearby, King Kong's shooting a velociraptor. Fire-spitting lizards slither through tunnels around their feet. Somewhere on the far horizon, a disintegrating god the size of a space station hurls lethal judgement down upon us all.

Every one of these entities is a player in Ubisoft's new online shooter Atomega [official site], and every player is the same character.

Atomega is an unusual fork in the road for the team that created endearing all-ages puzzler-platformers Grow Home and Grow Up to take, seeing as, at its core, it's a multiplayer-only first-person shooter. Squint a bit and you can see the lineage though - cubey creatures and semi-abstract gigantism, and vast blocky worlds you can hurl yourself around with wild abandon. Only with guns. And dinosaurs and gorillas and super-gods.

My immediate thought when playing Atomega is that it's Turtle Rock's Left 4 Dead follow-up Evolve, but made symmetrical (not to mention far more streamlined - perhaps a little too much so, given its single map, but it is only £10). Rather than hunters versus a monster that grows in size, strength and ability the longer it survives, here everyone's the monster.

First they're a powerless floating orb, then they're a tiny cube with only the most pitiful of firepower (unless they're facing up against another cube), then they're a lizard, then a dinosaur, then Kong, then a giant robot, then what looks a lot like a Minecraft version of Warhammer 40K's Eldar Avatar of Khaine. This is all presuming they survive long enough in each spawn to gobble up 'mass' cubes and grow and grow and grow while shooting and/or evading their enemies.

The longer you live, for the most part, the larger you get - but I think the key to why Atomega works is that you're not useless fodder for the bigger boys to pick on while you're on one of the smaller evolutions. Instead, you wage war with other players in the same boat - the dinosaurs will fight, and whichever dinosaur wins will harvest the discarded mass of their opponents' corpses, become Kongified and go off to fight giant apes instead. 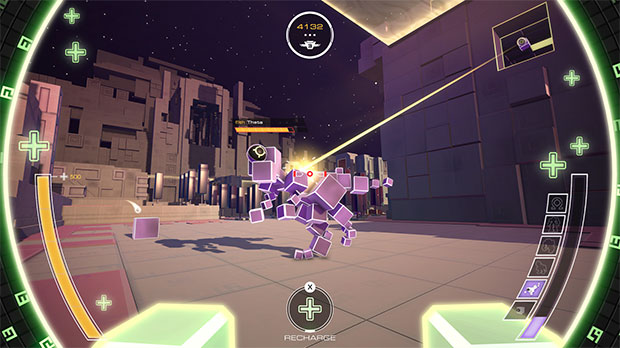 Lest this sound like the growth stages form discrete rounds, it's not - this process happens to every player multiple times within a five minute-or-so match. Get killed and you revert to initial orb status, but depending on how you play and who you encounter, you can get back to where you were relatively quickly. The trouble is, the bigger you get, the larger a target you become. Sure, a giant robot can make short work of a single Kong, but two Kongs, or a Kong and two raptors? Bye-bye, big monkey.

Though there's effectively only one weapon - a pew-pew gun that does more damage on headshots and grows more powerful depending on your level of evolution - respawning powerups grant temporary bonuses to damage or speed, or can recharge health or steal mass from enemies with every landed shot. The specific powers are randomly allocated each time you collect one, and the right powerup at the right time is pretty much the only way a lesser creature can take down one from the next tier. However, the real game-changer here is the teleport system.

You can teleport to safety - a random spot on the map that, in the six rounds I played, always seemed to be clear of other players - whenever you want, as often as you want. It's not a one-shot thing or a recharging thing or anything like that. It's yours to use and abuse. It's just that the cost of teleporting is one tier of evolution. You can escape death, but you will be weaker for it. Doing this once is no big deal - mass cubes are scattered all over the place - but do it a couple of times of in quick succession and you almost might as well have died and gone back to the start. 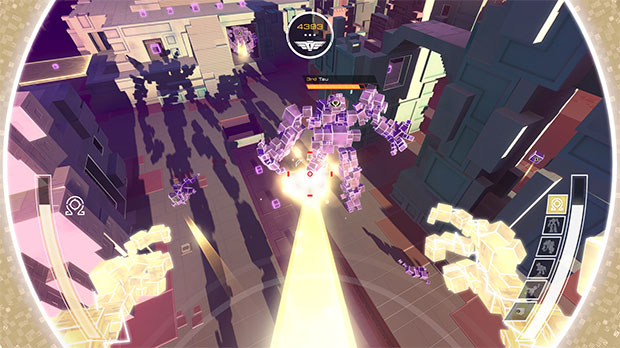 As such, teleport is a constant dilemma - yeah, it'd save my life, but the combo of knowing I'd lose mass and the hunger for the growth I'd experience if I managed to win this fight meant I always held off from 'porting until I was right at death's door. And, invariably, I was too late. Learning the signs, knowing exactly when to leave and when not to, will be a key element in mastering Atomega, I think, and the way it ties into the overall mass system lends the entire game a freshness that may not be readily apparent from screens and videos of cube-things going pew-pew.

As for super-god status, it's as much as curse as it is blessing. Sure, you're vastly more powerful than anyone else, but you're quite literally the focal point of the entire map - plus you're shedding mass rapidly, so it's hard to sustain for long. But it's grand old payoff for doing well and staying the course - even if you don't win a match, hitting the top tier evolution feels like a victory in itself.

Like I say, by and large battles are fought between like and like, but this isn't to say that larger players won't pick on smaller players. The latter can move faster and use tunnels and doorways that their bigger peers cannot, so they have a definite evasion advantage, but nonetheless they won't last long if they're caught in a big beast's crosshairs. Better reflexes and even stuff like higher resolutions (thus making tiny cube players more discernable from a great height) will only cement this.

My gentle concern is that Atomega could get a little punishing for players who aren't quite as well-versed in the ways of the headshot as others, though Ubisoft tell me that robust matchmaking should prevent this - presuming a big enough active playerbase, of course. If that does prove the case - and initial impressions of Atomega are that it very much deserves an audience - the great joy of Atomega in my limited experience to date is that there was always something to aim for, not just ultimate scoreboard victory. Reach the next evolution, reach the next evolution, take down this slightly bigger player, recover from teleportation-based mass-loss, and so forth. And, of course, become the biggest thing in the world, if only for a few seconds.

Then it's someone else's turn, because, be they box, lizard, dinosaur, giant ape, robot or celestial entity, they're all the same.

Atomega is released today, via Steam.