Hitman: Codename 47 was released 20 years ago today. In all that time, IO Interactive have crafted an entertaining seven-game series (not including spin-offs), with the eighth aiming for the heart in January 2021. The subject matter might be grim, but from the very first game, IO Interactive were always happy to fold information and easter eggs into their immersive sim (don't @ me) to a ridiculous degree. The games all have murderdeathkills, but they also have hauntings, mythical creatures, and real-world actors as targets.

I've had a blast digging up some forgotten facts and 47's more bizarre moments (this does mean this list contains some spoilers, so beware). There are so many that this could have been 200 facts for 20 years, but I stuck with 20. It seemed right. Enjoy!

He's a clone of multiple people. The DNA of four crime lords and terrorists was used to craft Agent 47 by German scientist Otto Wolfgang Ort-Meyer (who also added his own DNA to the mix). The plan was to create an army of subservient clones and organ donors for the men who provided the genetic goo. 47 was one of those experiments.

His barcode tattoo contains his birthdate 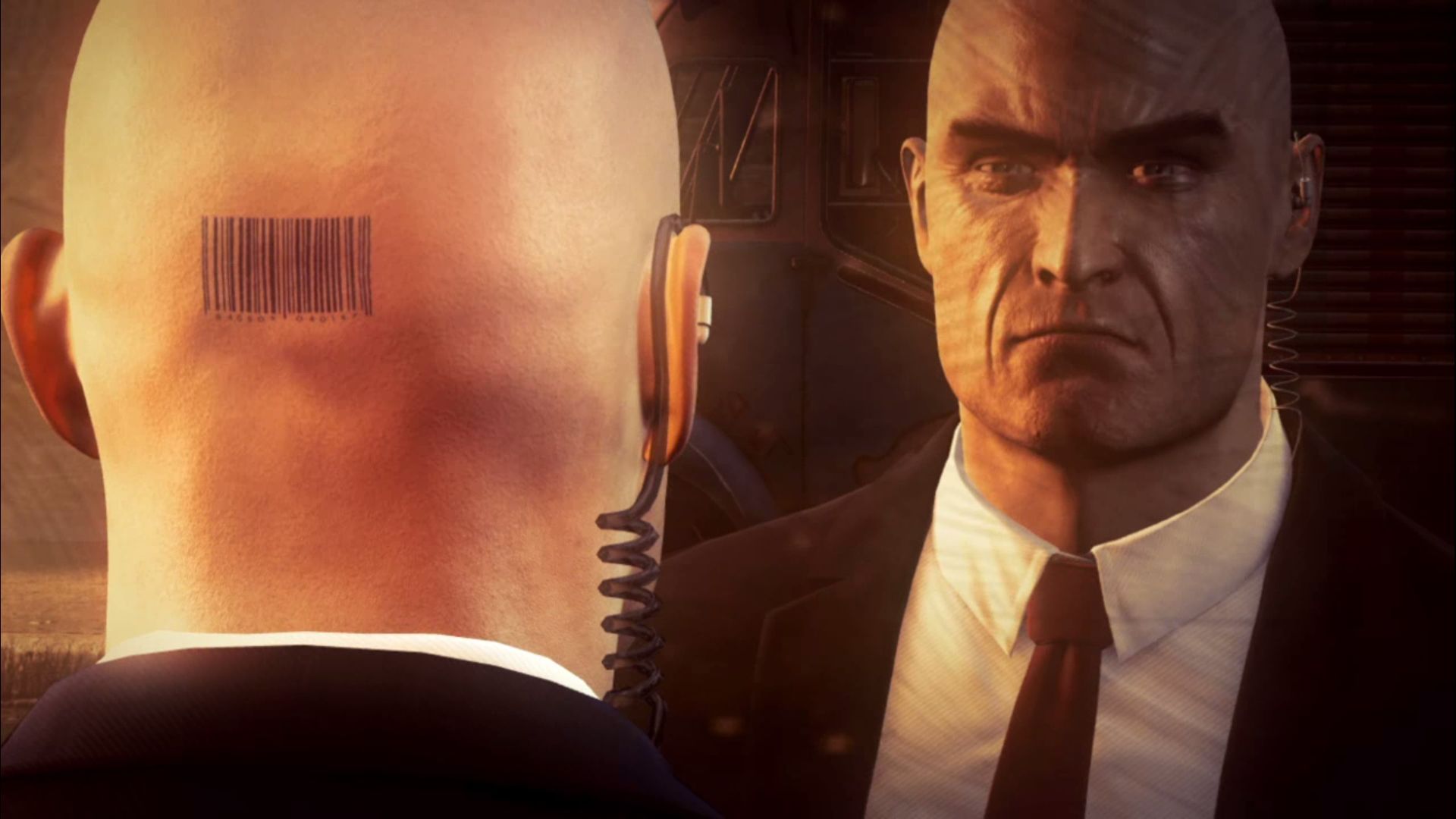 His first kill was at the age of 12

During his training, 47 took revenge on another bullying clone by garotting him in a bathroom before fleeing the facility that held them both. He was found at a bus stop and taken for breakfast pancakes.

The four main targets of the first game turn out to be the four DNA daddies. Otto Wolfgang Ort-Meyer hired 47’s agency to kill them all, which also ended up with Otto being killed for being a wrong 'un.

He’s bald because hair was tough to render

At least that’s what his dating profile says. But it’s also true. IO were not happy with their hair tech, and so his iconic dome was born. 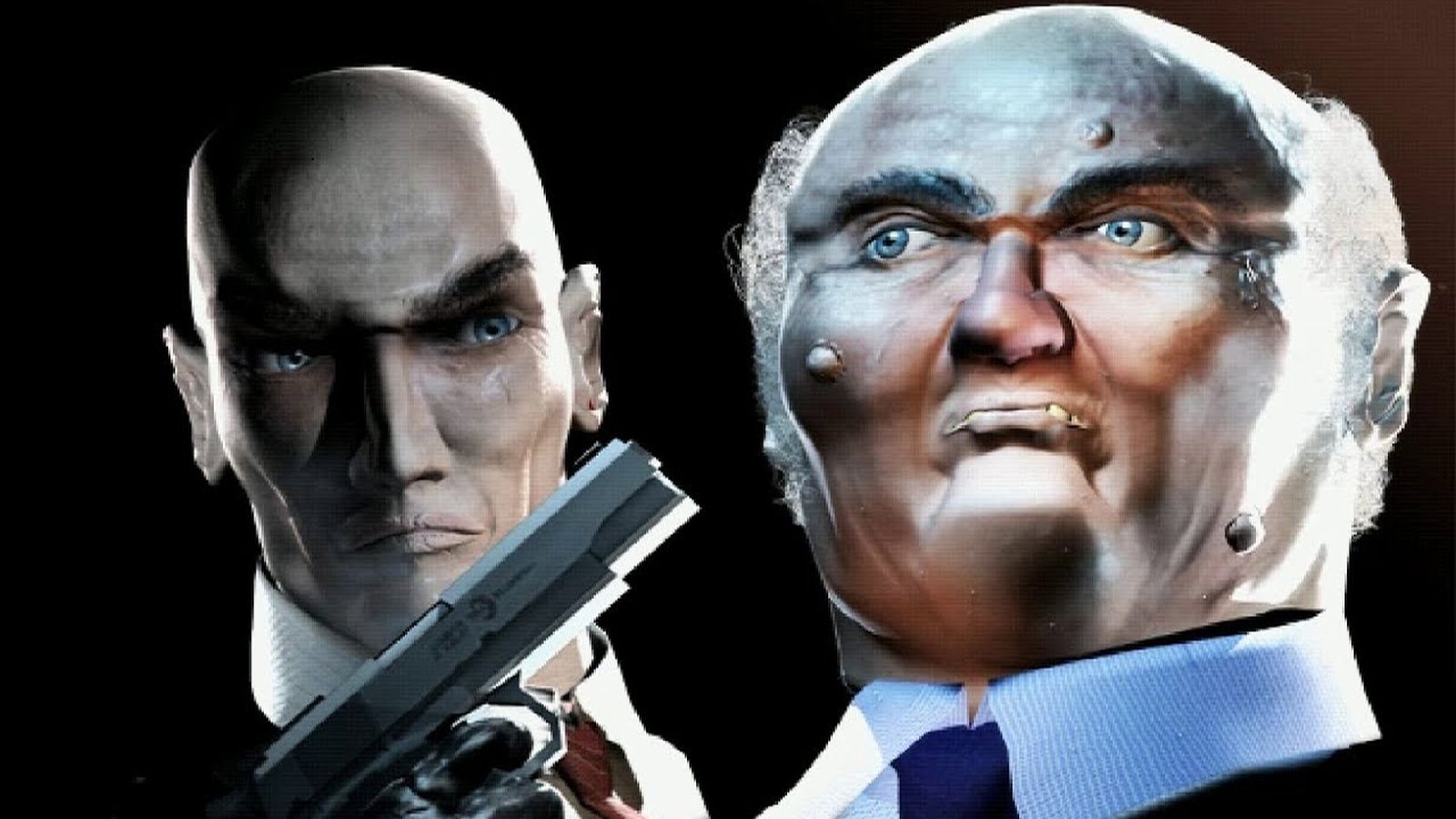 There are two Hitman 2s

Hitman 2: Silent Assassin was patched to remove the murder of Sikhs in a Sikh temple

There's a mission in Silent Assassin where it’s possible to kill several Sikhs in a Sikh temple. Not only that, but it looked quite a bit like the Harmandir Sahib, the holiest of the Sikh Gurdwaras, where several worshippers were massacred in 1984. The references were toned down in a patch, and use of the racist slur “towelheads” was removed. However, the GOG version is based on the unpatched release.

Though IO’s action shooter was still a year out from release, you can see a quote from
Freedom Fighters' Christopher Stone on one of 47’s ammo boxes in Hitman 2. Later on, the game appears on computer monitors during the "Samurai Showdown" mission. There is a nod to this in Hitman 2 (2018) where there’s a Freedom Fighters arcade cabinet in the Colombia level.

Technically Hitman: Contracts starts in between the "Curtains Down" and "Flatline" missions in Hitman: Blood Money, which is the next game. 47 is shot and relives a number of missions in his head, including all of the ones from the Codename 47. It’s an elegant way to remaster the original game, while still bringing something new to the series.

You can kill a ghost in Hitman: Contracts

Because it takes place in 47’s head, Contracts enabled the developers to get a little bit wacky. As he dreams of the "Traditions of the Trade" mission from the first game and wanders through the hotel at the heart of the level, a ghost will appear in several locations. If you catch up to him in a corridor, you can garotte him.

There is a surprising amount of dancing in the series

There are two dance floors in Blood Money, in the "The Murder of Crows" and "Till Death Do Us Part" levels. If 47 is left standing on either one without the player interacting with him, he’ll cut a rug instead of cutting throats. In "Amendment XXV", you can force a group of marines to Riverdance by stealing a briefcase from a lady at the start of a mission, wearing a Marine uniform, and throwing the case onto an unlit fireplace.

In the lobby of Hitman Absolution's "Dexter Industries", there's a large bomb dangling from the ceiling. It's a lovely bit of industrial feng shui but suffers from the technical glitch of being a live nuke. If you 'accidentally' shoot the tip, a cut-scene plays showing you the aftermath of your actions with a bonus cameo from Kane & Lynch.

Everything about the character Mark Faba is a twist on Bean’s acting career. He has survived a multitude of assassination attempts (like, for example, being riddled with arrows) and nicknamed “The Undying”. He was designated Elusive Target #1.

It gets more meta: during the mission, Faba stops and talks to 47, asking him as a thought experiment how he’d go about killing him.

In this case, both actors were portraying themselves. The fans chose which Gary was more evil. Busey won and was designated an Elusive Target, though both actors appeared in-game.

It is canon that Krakens are real in Hitman 2

You can unleash one in a special Easter egg. Look!

47 can escape a hit on the back of a dolphin

Hitman has always been known for a dark sense of humour, like letting the assassin pluck clown costumes and Santa outfits during his missions. The last thing Dom Osmond saw in Hitman: Absolution was the cold, dead eyes of the chipmunk outfit I was wearing.

You gain flying powers with a flamingo costume

This time around, 47 makes an even more implausible escape during a hit in Miami, wearing a flamingo outfit and flying out of the level.

Square Enix Montreal had an AAA Hitman game in development back in 2012. The plan was to take Hitman off of IO’s hands to enable them to work on other projects. In hindsight that’s hilarious, but at least they tried. Though it never panned out, Square Enix Montreal did make Hitman Go, a turn-based toylike puzzle game. IO Interactive have remained the stewards of the Hitman series, and have truly excelled in building a huge assassination sim over the last decade. It bodes well for their upcoming Bond game.

And it should include all the content from Hitman and Hitman 2.