If you click on a link and make a purchase we may receive a small commission. Read our editorial policy.
This is part 1 of Nate gets good at AoE2, a series in which Nate attempts to get really good at Age Of Empires 2, via the monstrous crucible of ranked online multiplayer.
Watch on YouTube

I've never particularly been one for competitive multiplayer games. I've played the odd bit of Overwatch in recent years, but mostly as a way to hang out with pals, and I quite enjoy the complete anonymity of ranked hearthstone, even though I'm guff at it. But I've always been massively scared to play strategy games against human opponents, in case it ruins the illusion that I might be good at them. Plus, I panic! I get disproportionately terrified by the idea of being locked in a map with someone who wants, essentially, to end my pretty game of ant-farming, and so the idea has always seemed too stressful to bother with.

But then, after I fell in love with Age Of Empires 2: Definitive Edition in November, I started watching casts of high level players fighting 1v1 duels as a way to relax before going to sleep, and ended up getting fascinated by the absolute precision with which they handled the game.

If you're not familiar, AoE2 is a fast-ish strategy game where you become a medieval king and beast your foes with the metaphorical willy that is your army. To grow your willy, you have to build up a resource-gathering infrastructure, not just to build troops with, but to afford progression into four increasingly expensive "ages" (dark, feudal, castle and imperial), which each offer better upgrades. I'd always known that to win in a competitive 1v1, there's a strict build order that you must adhere to, with rigid timings, if you're going to stand a fighting chance. You also need to memorise a lot of hotkeys, and practise unit micromanagement. This had always seemed joyless and uncreative - like it robbed the game of any whimsy or fun. But after a bit of mucking around with the game's Art Of War trainer, which teaches you to do this stuff against AI opponents, I suddenly saw not just the appeal, but also how quickly I could pick it all up. I resolved, for the first time in my life, to become Good at a game. And last night, after a few weeks of practising on non-frightening computers, I finally worked up the nerve to embark on my first, ranked, 1v1 game. Here's what happened.

I (blue) had elected to play as the Ethiopians, because their archers fire faster, their siege engines shoot bigger, and they get bonus resources when they go up an age, which would help me afford age advances quicker. My enemy (red) was the Britons, who get better archers, shootier towers, and more efficient food-gathering from herd animals. The map we were assigned was black forest - a map mostly covered in wood, with several chokepoints connecting each player's territory. It always, always ends in a bloody, early struggle for one of those chokepoints, but I was determined to come out on top. 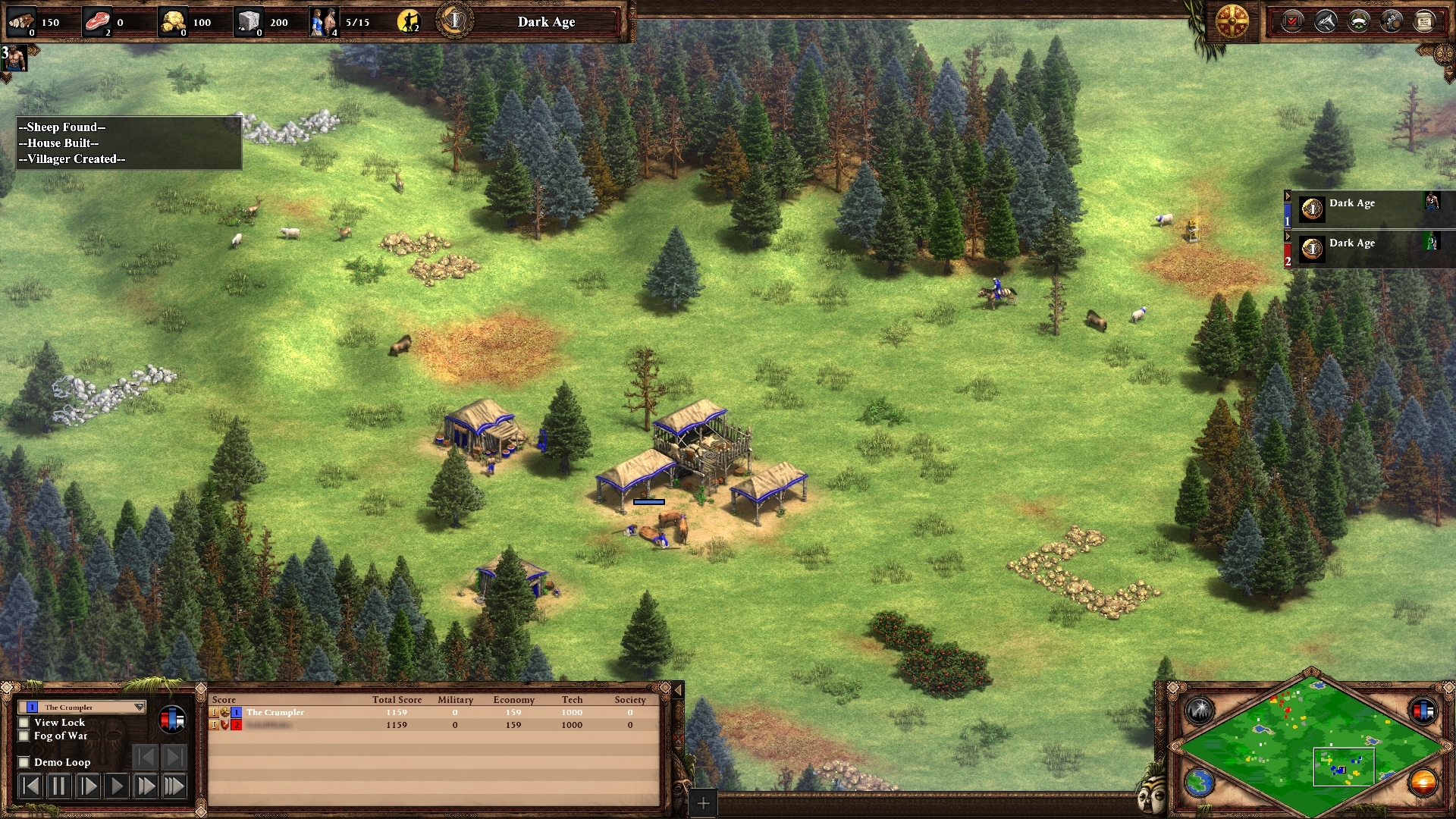 Here I am as the game opens, smashing away at a dead cow to pile up the dinners, as I religiously and mechanically follow the build order so I can get to the feudal age first and outgrow my opponent. A look at the minimap in the bottom right (these screenshots are from the replay, so you can see the enemy position), shows me that the choke point this will all come down to is near the enemy town centre - it's the pale green passage just to the right and down from the red blobs. 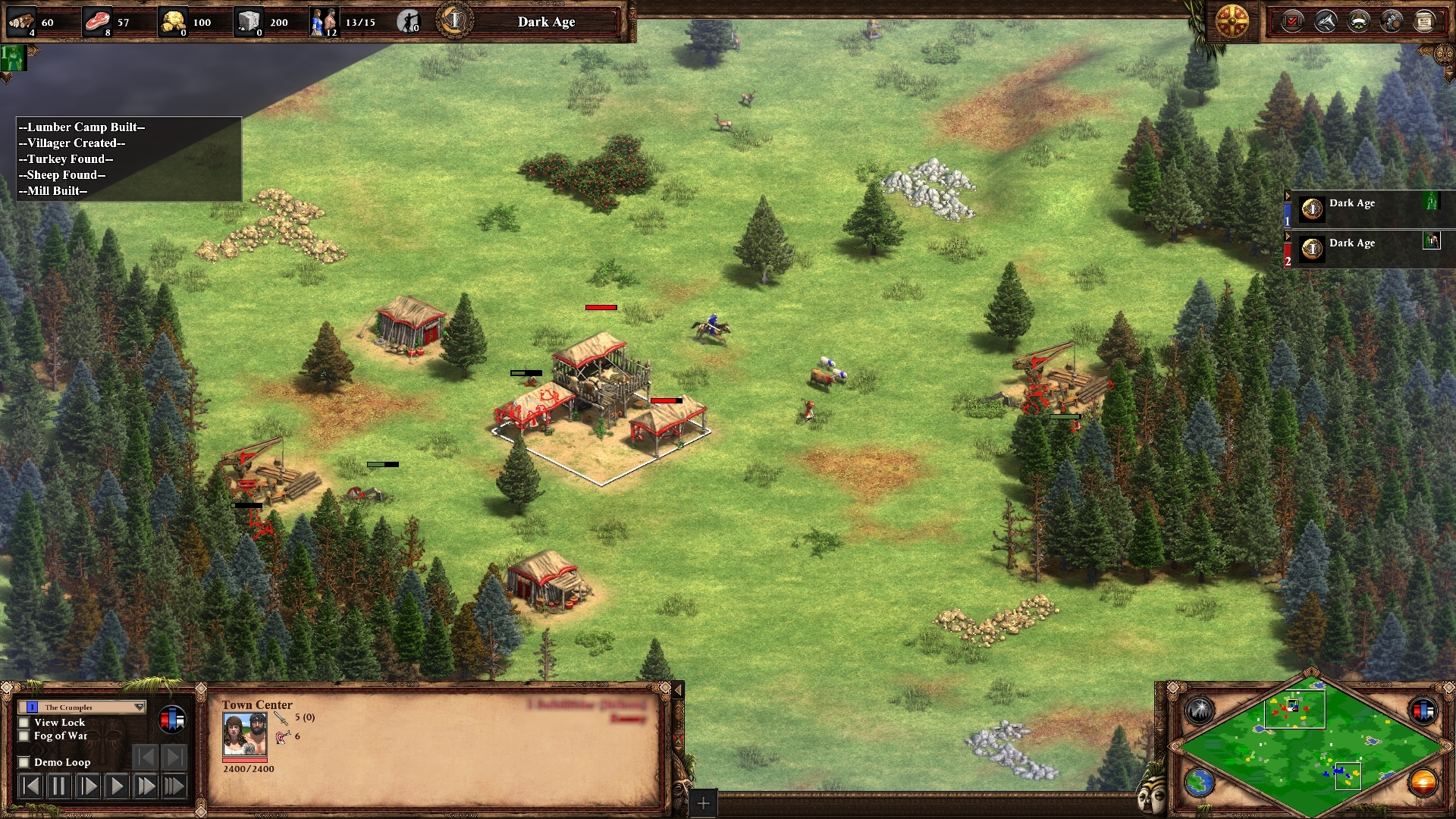 I'm really proud of this early game move. As the Britons sheep-monstering powers were probably going to give them a leg up into the feudal age, I send my scout to their base to steal a couple of sheep (their collars have turned blue), and then slash up some cows to make them go manky and inedible. This sort of early interference with an opponents' starting resources is called "laming", and although it's considered dishonourable by players at the highest level, I was in the filthy sump at the bottom of the ranked ladder, and I was going to fight as dirtily as I needed to in order to climb out over this fellow's corpse. 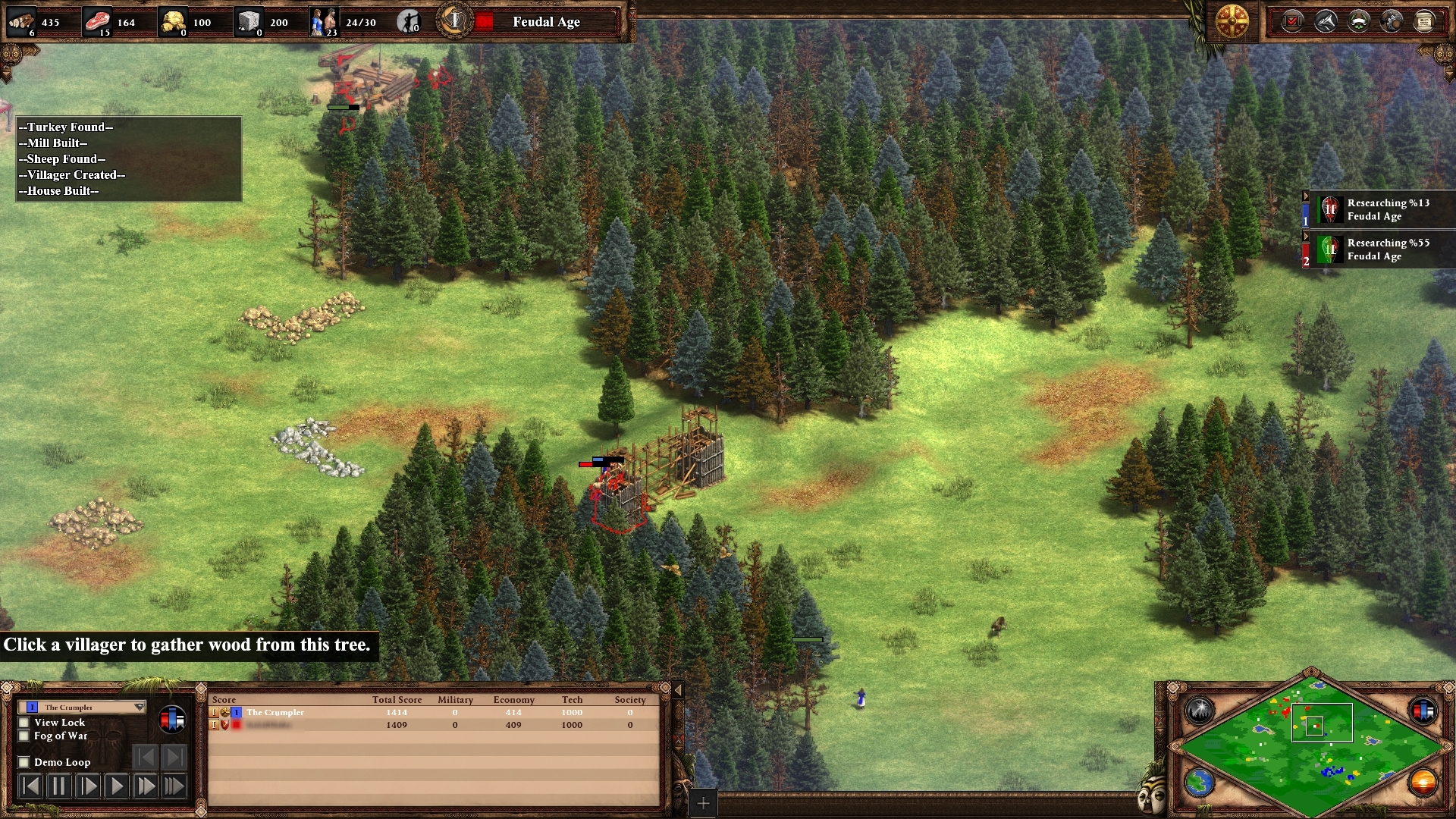 Alas, my dirty tricks are not enough - as I'm headed into the feudal age (as you can see from the bar at the top), my foe is already there, and has, crucially, sent forward a villager to build a wooden palisade wall across the chokepoint. I send in my scout to try and mangle them, but their horse is also on hand, and so my scout gets fully Tescoed before it can finish off the wall-builder. To the bottom right, you can see I was sending in a villager of my own to attempt a counter-fortification, but tragically, I hadn't noticed the wolf lurking a few tiles away. The villager was savaged, and the britons had control of the point. 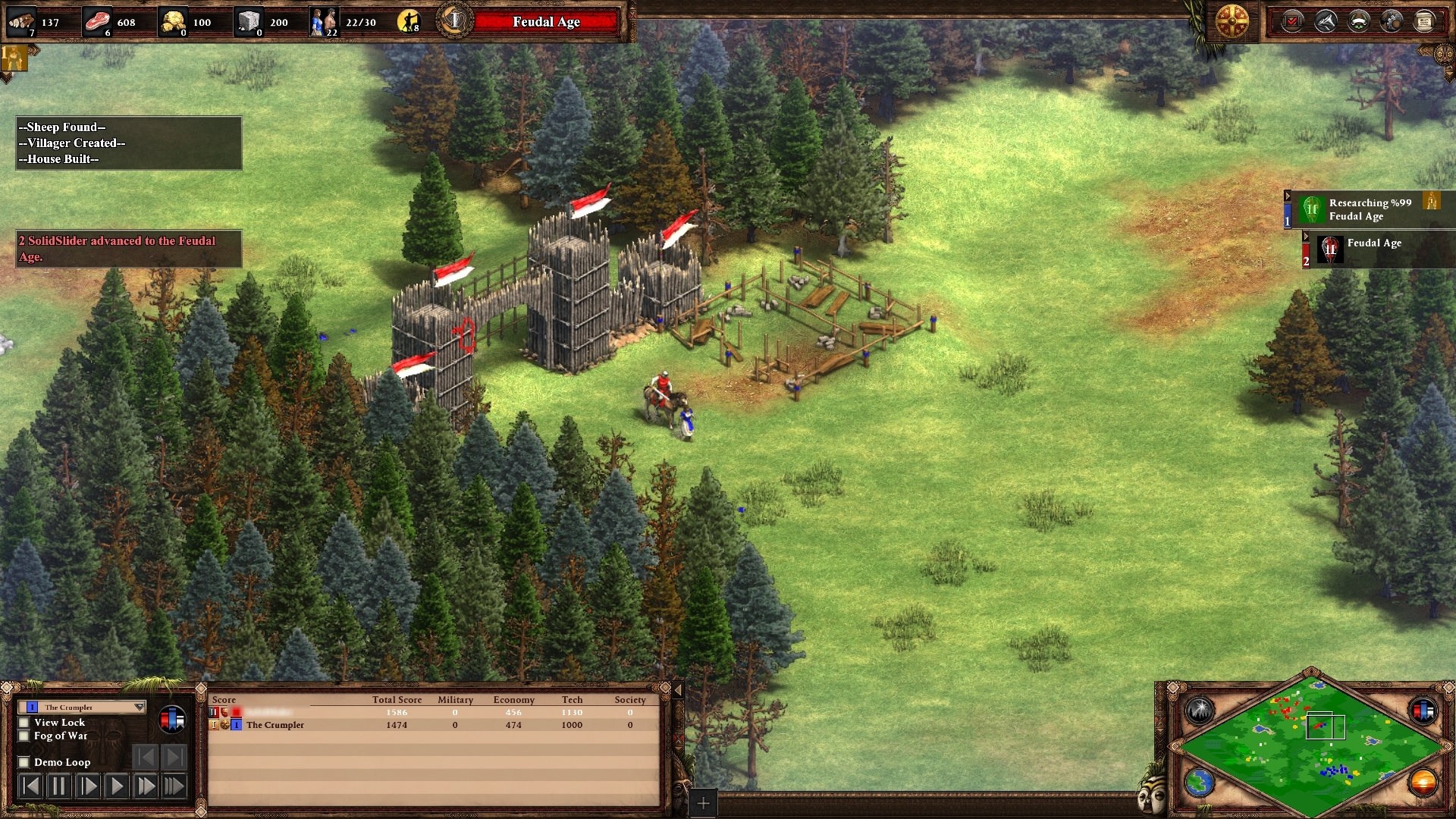 I'm acting too hastily at this point, and try to get a barracks up beside the gate to rustle up some brutes to knock it down before red can fortify further, but this second villager is also hacked to pieces by Sir Horsealot. That's two down, which is one tenth of my population, and a huge blow in the early game. Also, as you can see from the "idle villager" count to the left of the age bar, I've got nearly half my workforce idle. This doesn't last long, and is because I mistimed my transition from boar-hunting to farming thanks to the distraction of the chokepoint scuffle, but these things really add up in the dark age resource race. 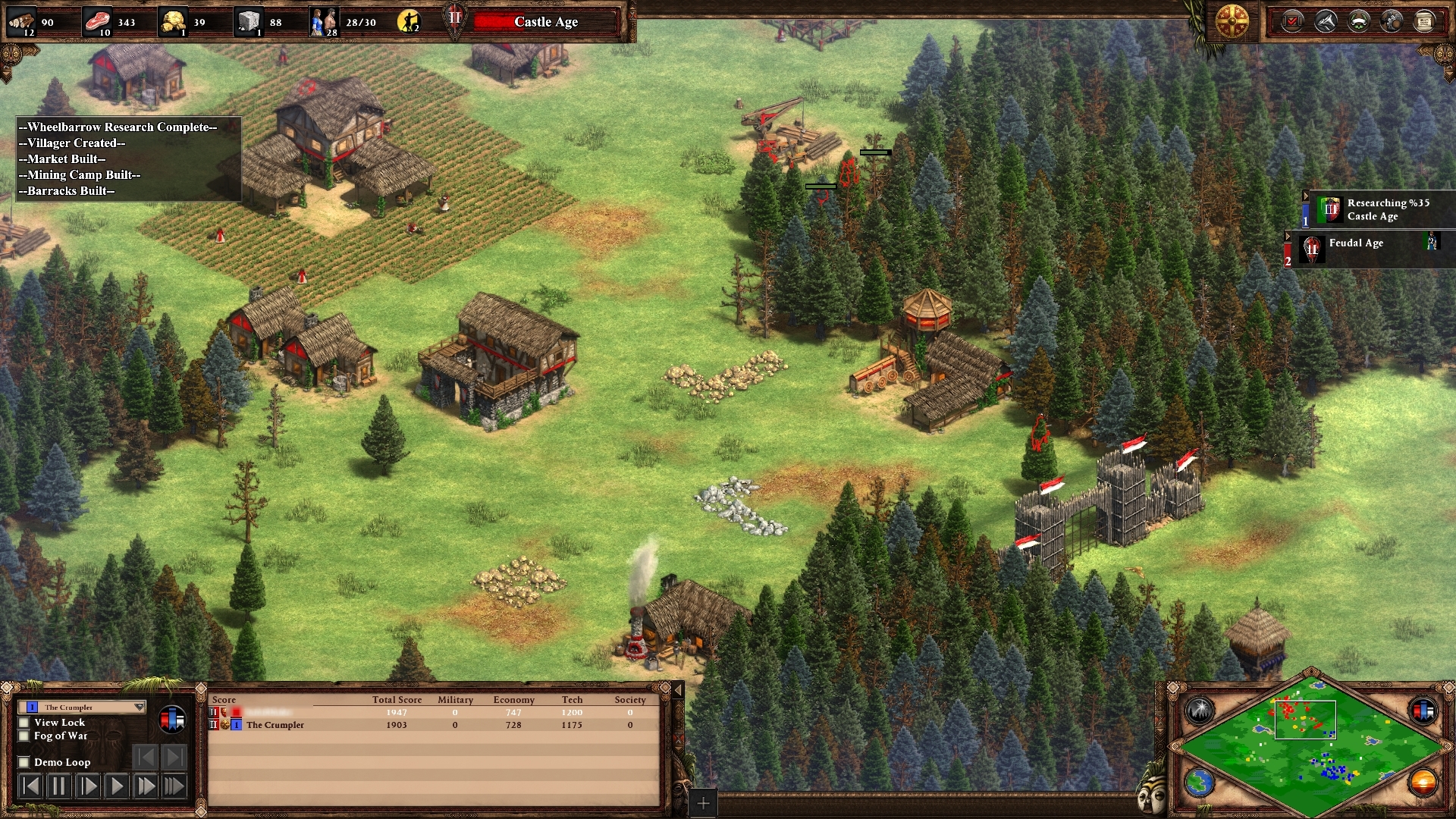 Now I'm in feudal age, I bring in a couple of lads to build an archery range and a defence tower to have another stab at wresting control of the pass. At the moment my mind is fully on defending against an incursion, but now I look at the replay - this is red's town, right on the other side of the wall - I should have been looking at an early push, to whack that gate down and bother his economy. The best defence is a good attack, right? But no; I was scared, and concentrated on building up a little force of fast-firing ethiopian archers to secure the point. 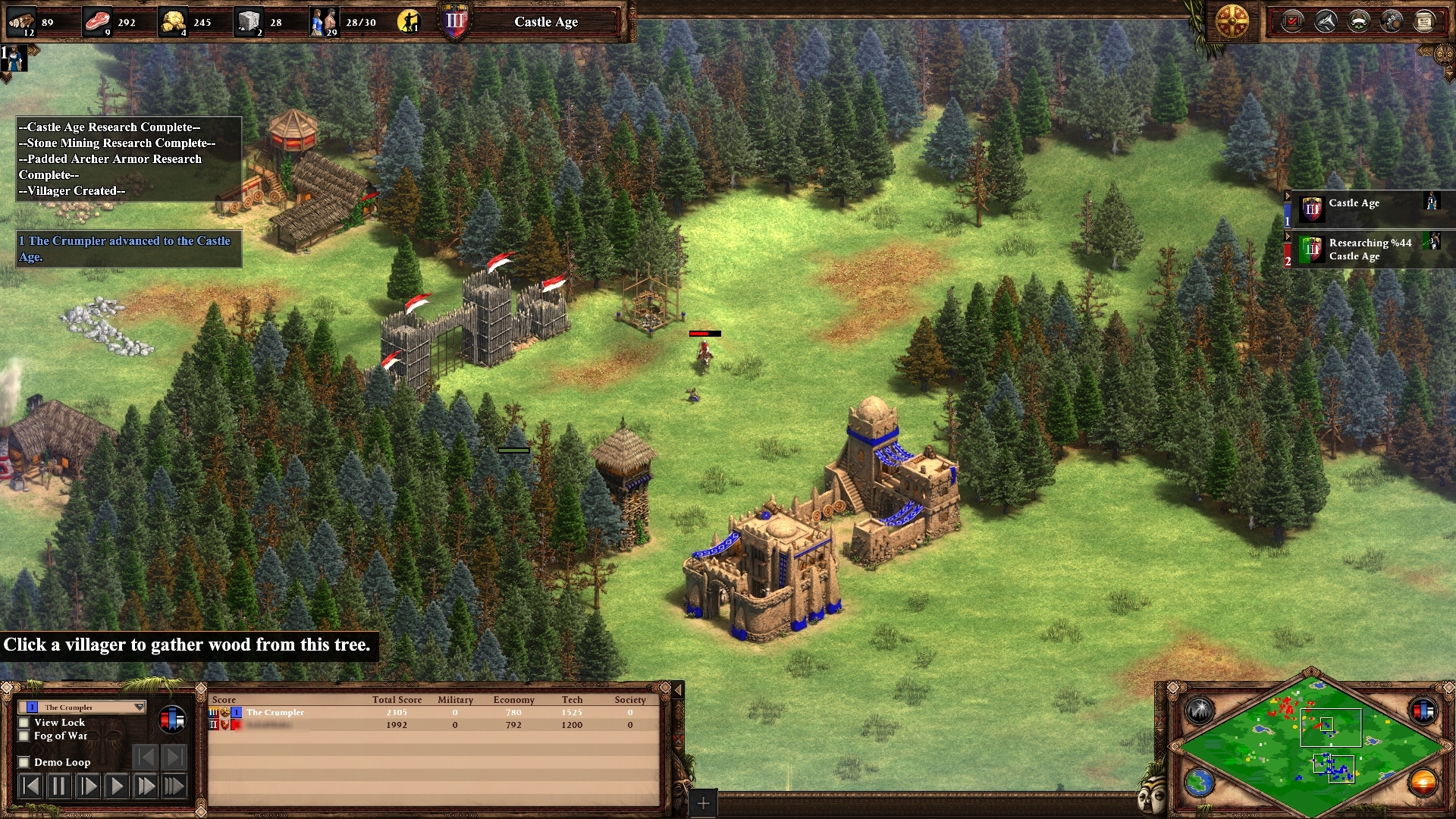 Another villager dies, trying to build a second tower. Yikes. But it's ok! Because of my age-advance bonus resources, I've been able to economically outpace red, even with my lower villager count, and "fast castle" - slingshotting straight into the castle age from feudal, a few minutes before the Britons are able. Surely this will give me the upper hand! 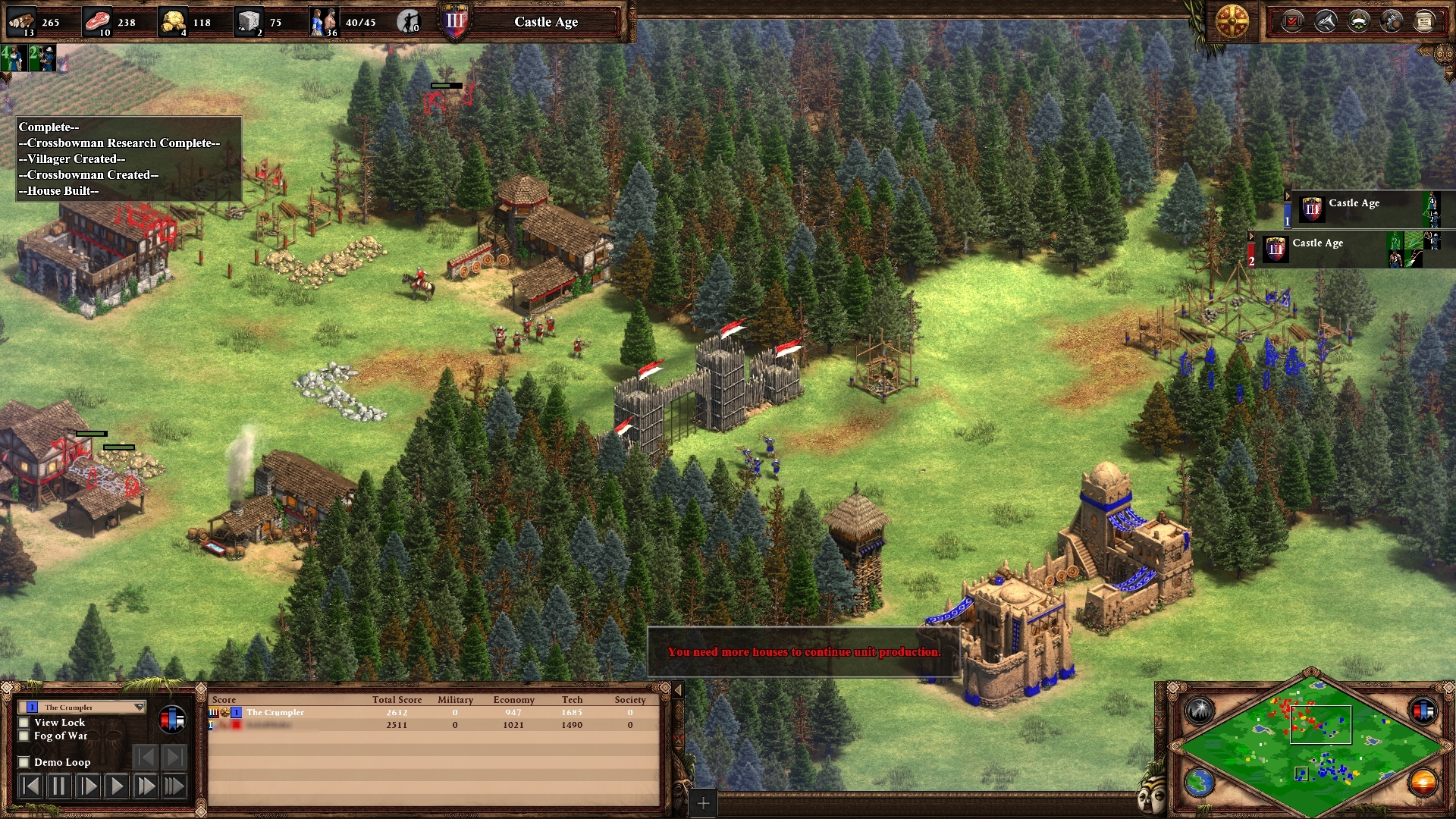 It does, for a while! I've got a little squad of crossbow lads, supported by one (and shortly two) towers, plus my micromanagement of them is pretty decent, and I'm soon denying the enemy the area for a few tiles to their side of the wall. At the right of the screen, you can also see I'm building one of two new town centres. This is something which becomes possible in castle age, and is essential for the continued economic arms race, as castle age warfare is costly, and advancing to the imperial age costs a bloody fortune. In hindsight, it was fairly terrible of me to put it right next to what was heating up into an active warzone, but it's easy to do bizarre little things like that, when you're trying to think faster than an unseen stranger who wants to kill you. By now, my heart is absolutely hammering - I'd been fairly adrenalined-up all game, but now I actually seemed to be in the lead, it was really freaking me out. 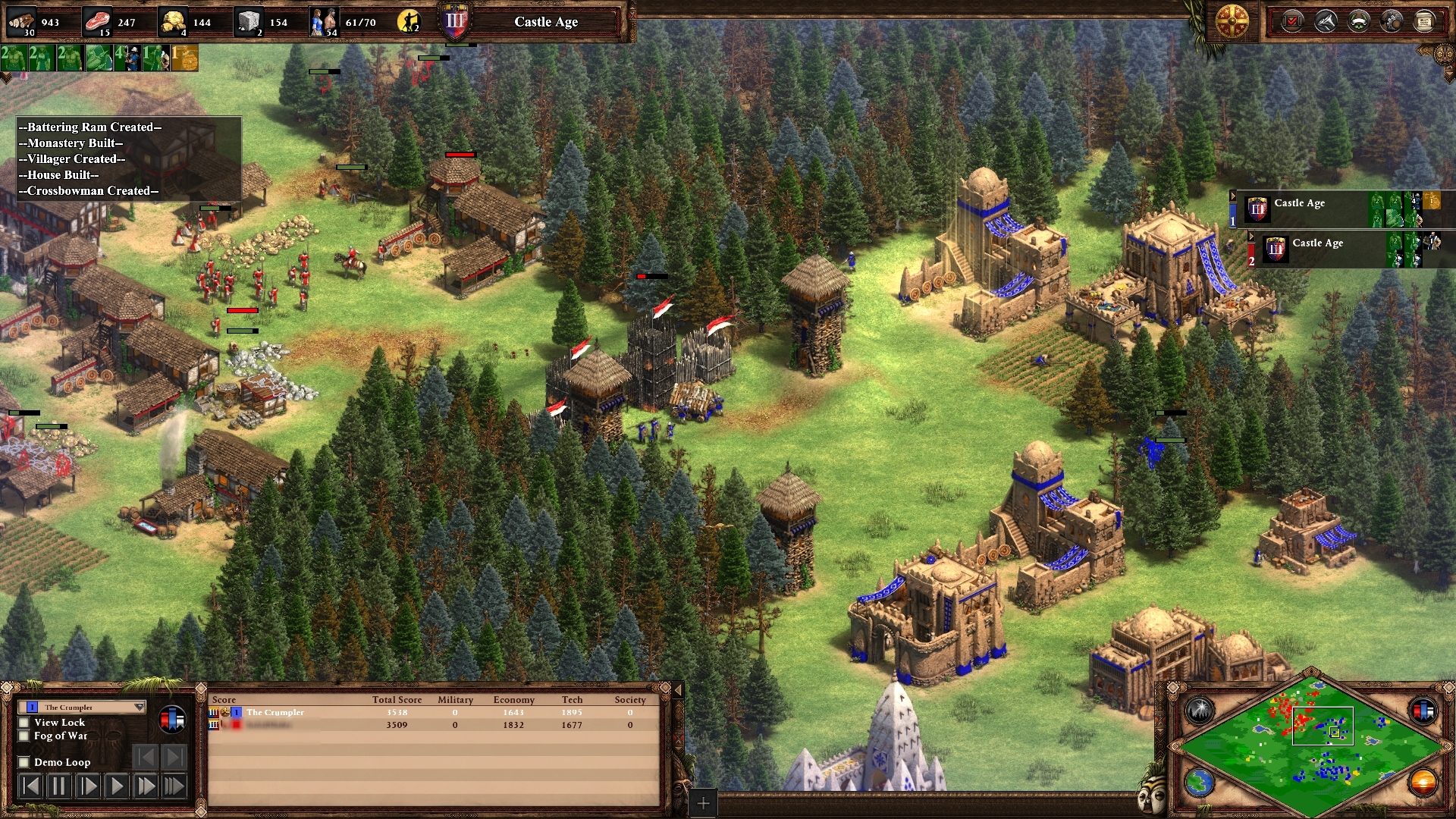 Now, feeling confident, I decide to apply pressure and break down his wall, but I get three things wrong. One, I'm doing it way too late, because by now the Britons have abandoned the crossbow pissing contest, and are building up a force ready for my inevitable breakthrough. Two, I'm relying on my archer superiority, totally forgetting that my opponent will certainly be building javelin-hurling skirmishers to counter them, and I'm training nothing to counter skirmishers. I might as well have been pelting a load of wolves with dog food. Three, I decide to invest in the considerable expense of building a battering ram to take down the wall gate, despite the structure being comically weak. A few spearmen (which the Ethiopians get to upgrade to pikemen for free!) would have both done in the gate, and countered the skirmishers. I've already lost - I just don't know it yet. 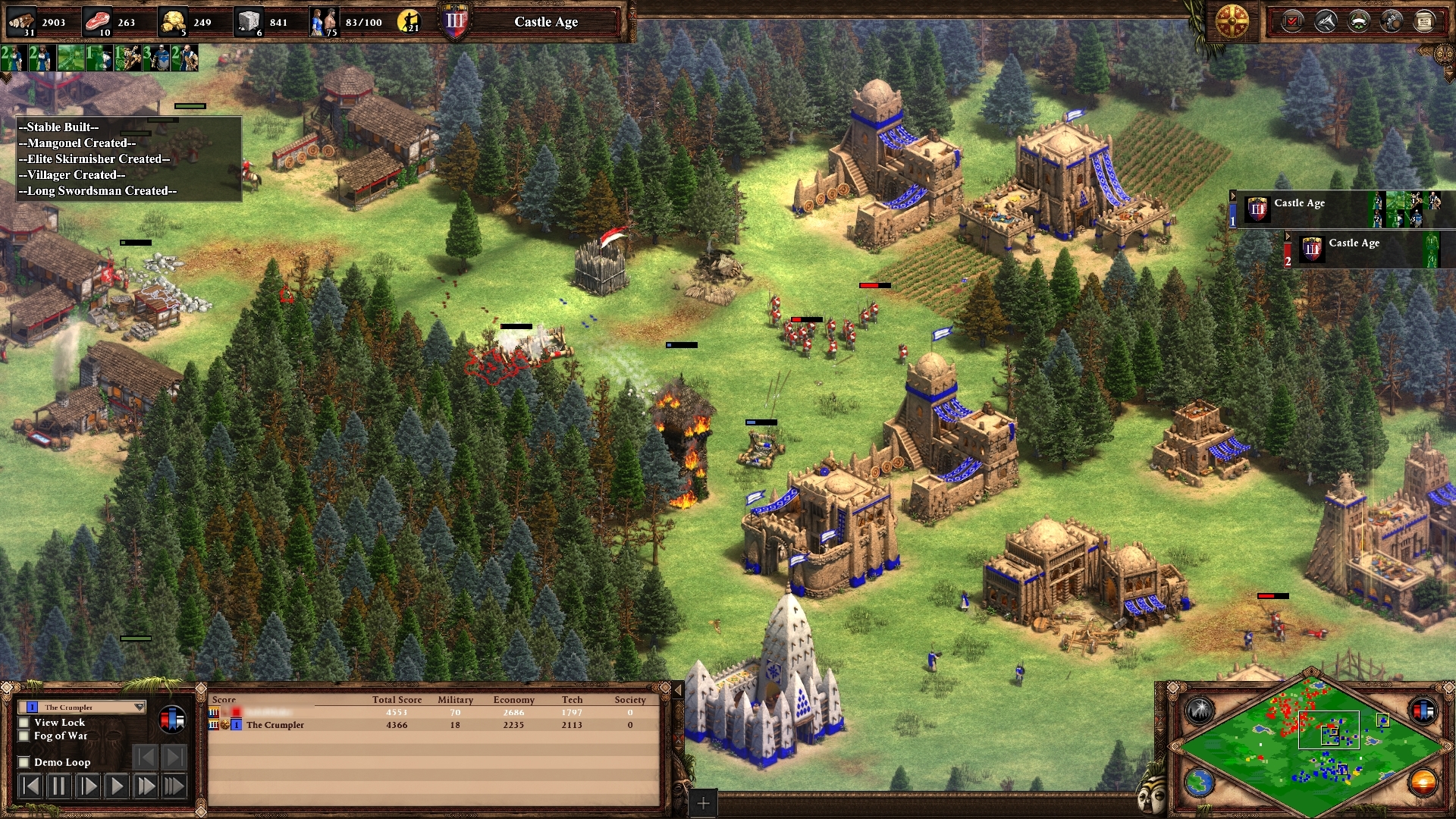 As soon as the wall comes down, in come the skirmishers, and clean up my crossbowmen with grim ease. Worse still, the Britons are now packing a couple of mangonels - area-effect catapults that devastate massed range infantry. Panicking super hard, I build a mangonel of my own, and throw up a stable and a... monastery? But it's too late to start developing a proper counter. 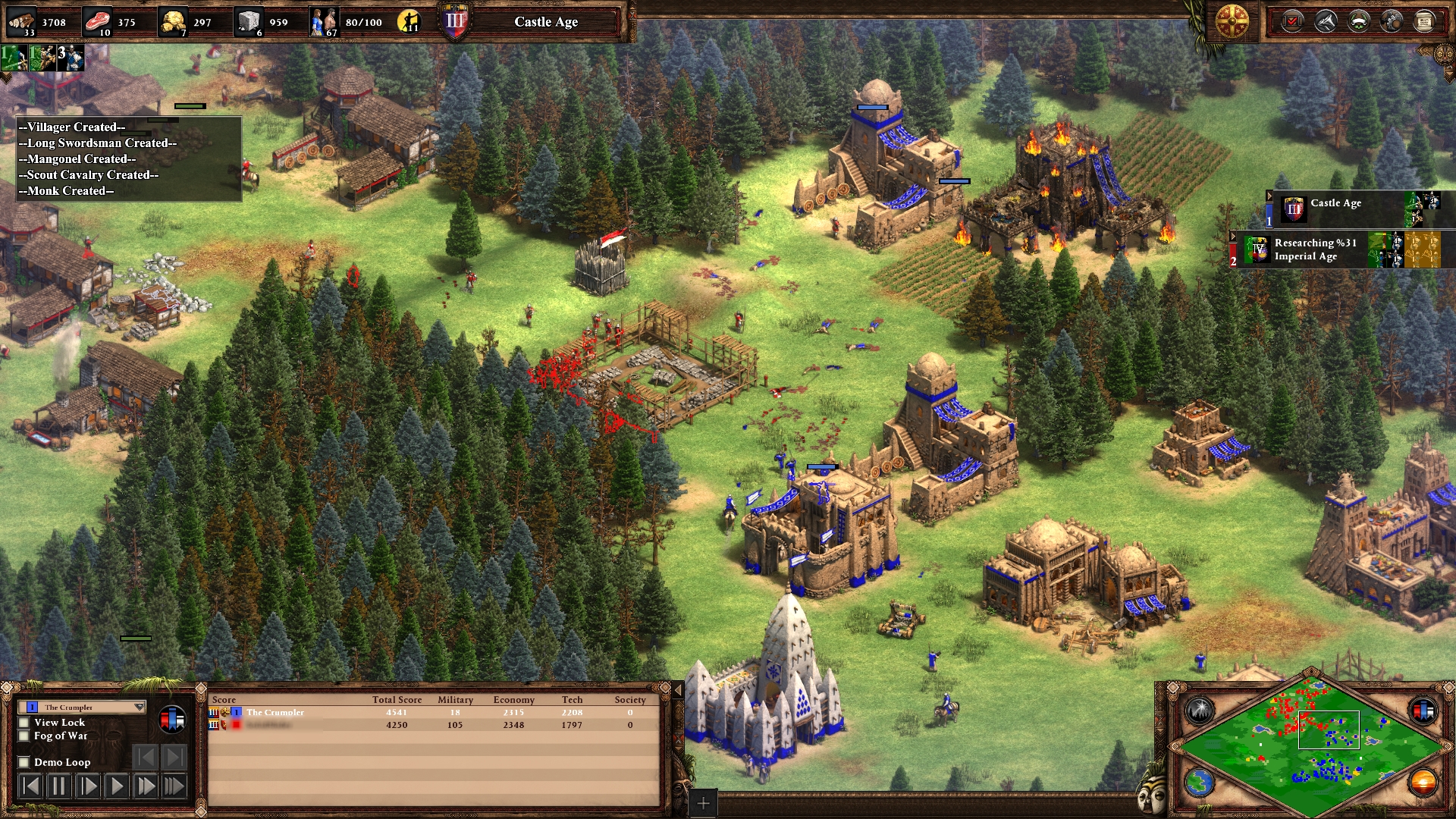 I do eventually scrape together a repelling force, but in the time red has had the advantage, they've muscled in with a pack of builders and started building a castle right in the gap. I mangonel the builders, and send panic-horses round to try and cut them down, but red knows this is an all-or-nothing moment, and has abandoned his whole economy to throw troops at the castle. Seconds after this image it is completed, and I know I no longer stand a chance. It's GG for me this time - but I've learned some valuable lessons, and I still need to practice my hotkeys. Let's see how I fare in my next game...