Y'know what? I don't hate it. Which, after 19 years of hurt (the remarkable JA2 mod scene aside), is happy progress for once-beloved turn-based mercenary combat series Jagged Alliance.

There's a whole mess of things wrong with newly-announced latest comeback-apparent Jagged Alliance: Rage, but a few hours with early code has me thinking there's a lot right with its core.

Rage makes the two decades since Jagged Alliance 2, the last time this series truly found its way into hearts and minds, a plot point. Its gang of quipping, ill-tempered mercenaries are now 20 years older, with all manner of weaknesses and tics to reflect their long years in the field. Borrowing a cue from Darkest Dungeon, working around their deficiencies and propensity to pick up new injuries and ailments is all part of how to survive a guerrilla run through the jungle. 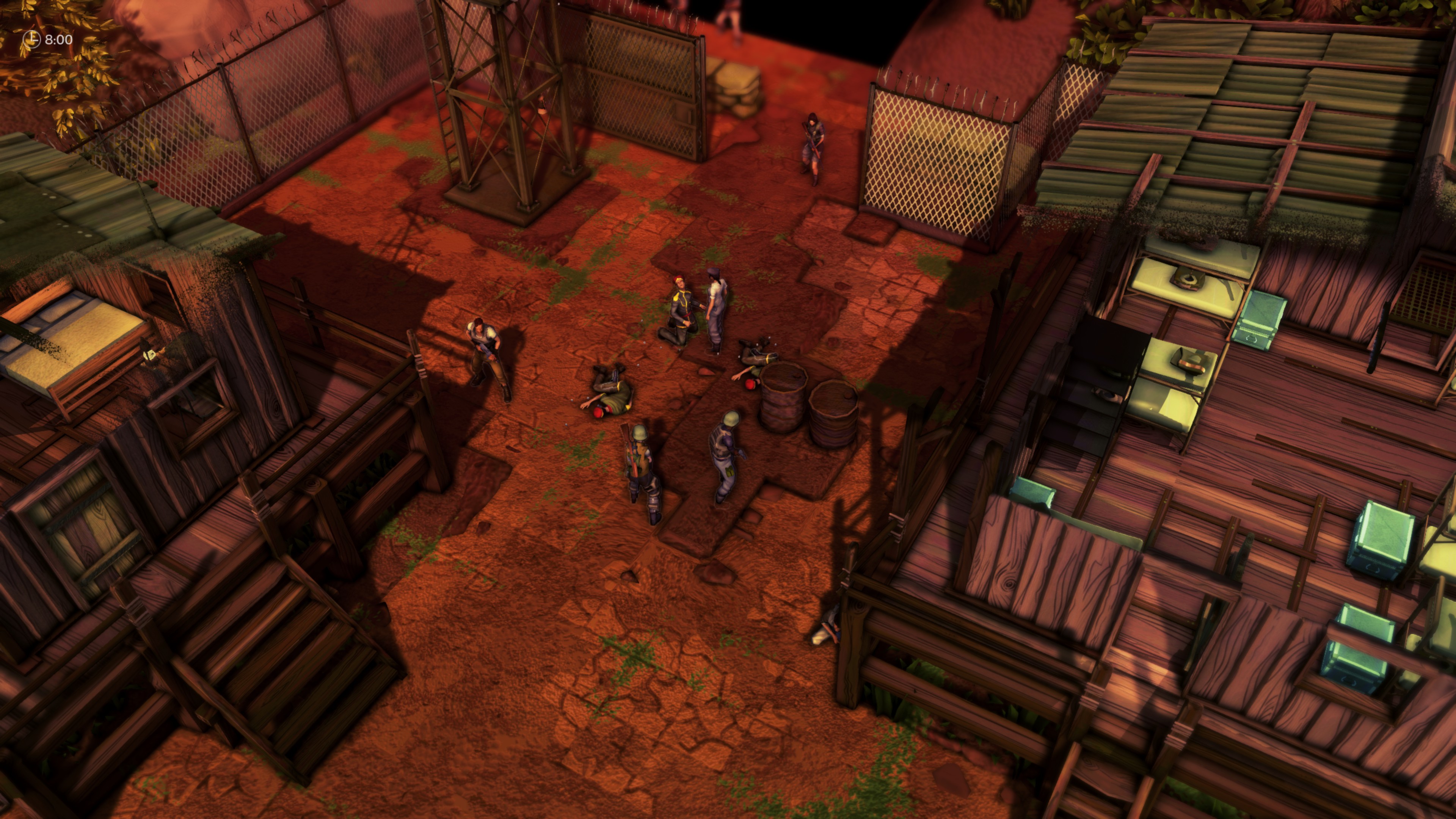 This isn't a roguelike, but it does borrow a few concepts - you take your damage with you, you're dependent on loot found semi-randomly during combat, and you need to make tough choices about what to fix or improve during your brief downtime.

Rage is recognisably Jagged Alliance, which is to say you exact turn-based control of a squad of grumbling but blood-steeped mercs sent to deal with warlords and drug-runners in an exotic locale, but with two major changes. The first is a certain degree of streamlining. There is a ruder way of saying the same thing, which I expect is being employed with grim regularity in Jagged Alliance communities right now.

In any case, Rage is clearly striving to be XCOM to the 90s JAs' X-COM - focusing on the core loops of combat and strategy, discarding some of the nuances of micro-management in favour of a tight focus on moment-to-moment decisions. Me? I've always taken the view that XCOM doesn't replace X-COM: I dig both. I feel the same way here, in that we've still got JA2 and all its marvellous mods - this is exploring something different. Narrowing the field of possibility to move/shoot/sneak/use might amputate complexity, but it increases intensity.

The flipside to that is that JAR clearly has only a fraction of XCOM's budget. I can for now stomach some of this early code's occasional glitches - disappearing weapons, lousy enemy AI, broken missions, deeply debatable to-hit odds (I missed three 95% shots in a row at one point) - as potential consequences of this being an unfinished version of a game not due for release for several months. (Autumn is the word, which I imagine could run to as late as November). An undeniable sense of, well, cheapness is another matter. Tiresome panto voice-acting, the same handful of enemy barks on loop, a slightly iffy UI, some glaring quality of life ommissions... well, I guess similar charges could be lain at JA2's feet, but this is 2018.

It's none of it truly awful, some of the oh-so-videogames dialogue aside, but there's more shonk here than a house made of things bought in Poundland. It does frustrate me to think about the difference another half-year (or more) in development might have made to JAR.

The biggest sin is simple time-wasting, because it's so at odds with JAR's general tilt towards fluidity. Particularly, enemy turns take far too long without having the visual drama or even unpredictability to justify it, while post-battle loot-harvesting (absolutely vital to success, which I'll come to shortly) is a slow-motion nightmare of clicking between obscured corpses and flitting items endlessly back and forth between small boxes. What I'd give for an end-of-match choose-your-shinies screen... 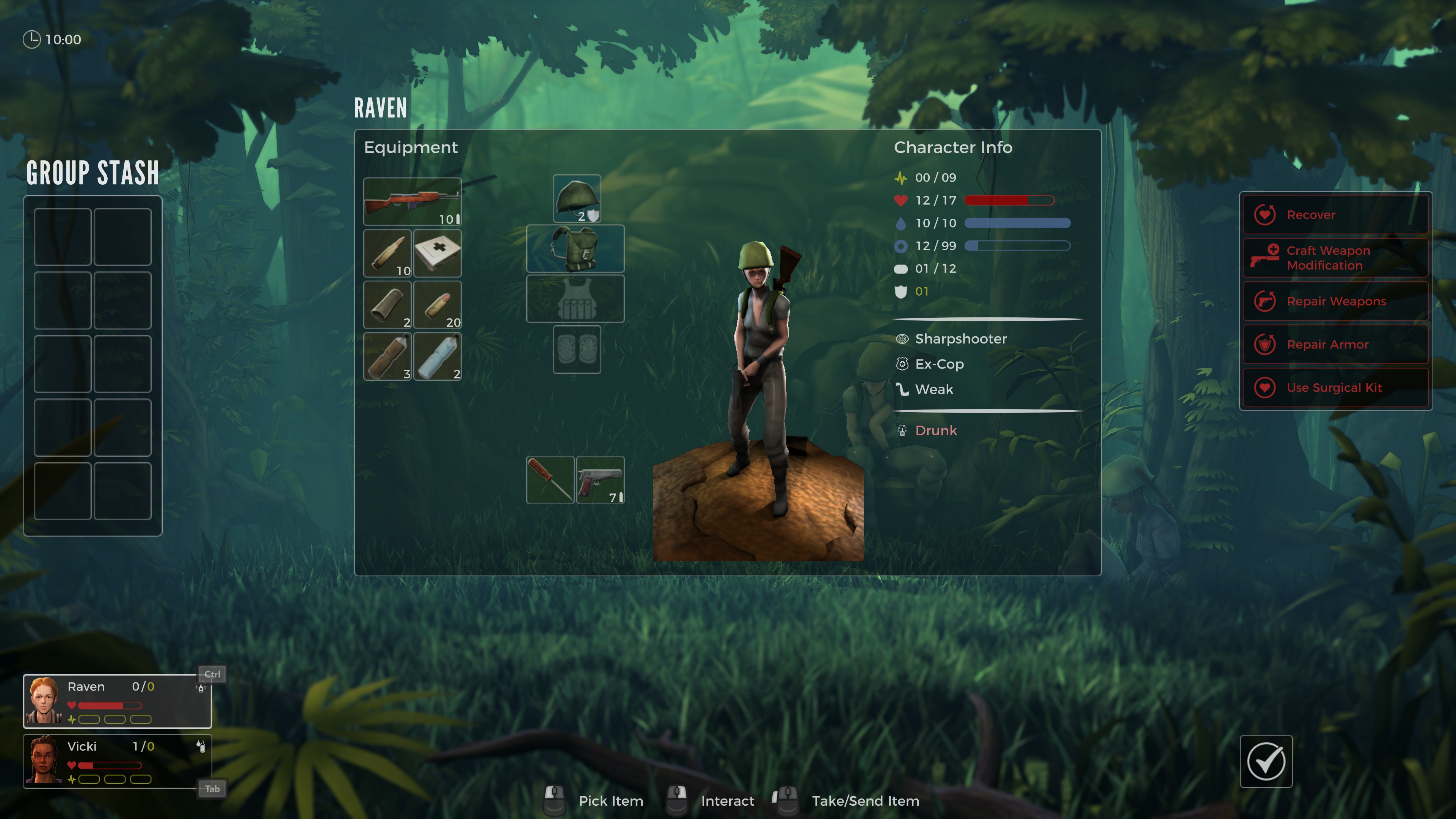 I dig the general sun-kissed style of it all, though. This is a game with a personality, even if I find the characters' actual personalities (most of them are returning JA1/2 favourites) too broad and grating for my own just-get-on-with-it tastes. But best of all is a new survivalist element. Rather than remotely buying supplies between missions, here you're entirely dependent on what you can scavenge from the battlefield. If a gun breaks, runs out of ammo or accidentally gets left in a dead bloke's pocket while you're trying to steal his grenades, you're screwed until you can find something else on a corpse or in a box.

Same goes for the likes of infections and dehydration - they might not out-and-out kill your dudes, but they'll be on a massive back foot in terms of hit and action points until you find meds or water. Again, it's a roguelike trait - "I really need this one thing, but I didn't get that one thing and oh nooooo". In these early hours of JAR, it's balanced well, in that I'm worried about this stuff all the time, but I'm not being totally demolished as a consequence of it. A question mark hangs over whether this can retain a natural sense of crisis or become grinding, artificial punishment in the later hours. An even bigger question mark hangs over whether juggling the same handful of needs endlessly can remain interesting or not. 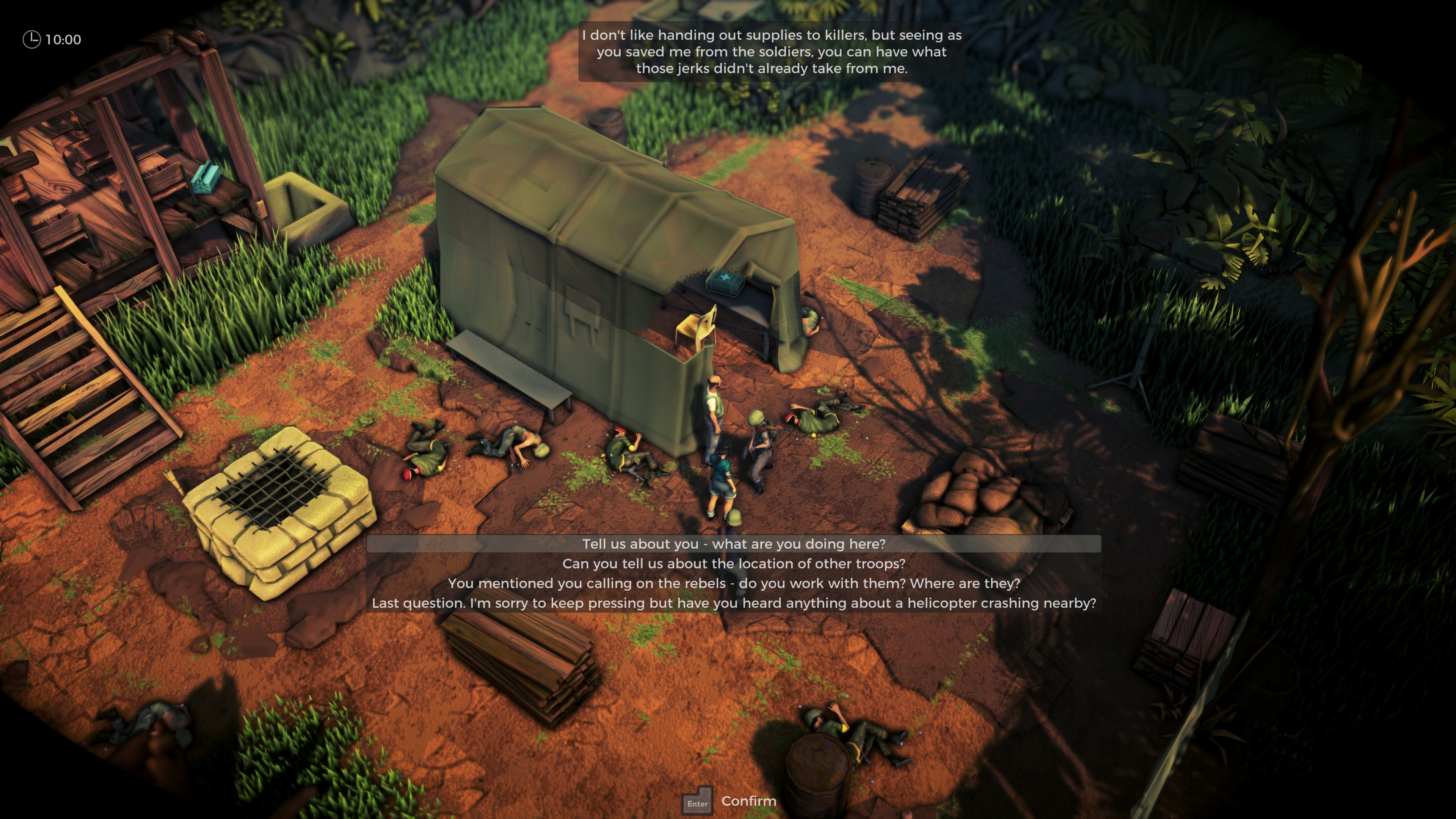 For now, I'm definitely caught up by what is, for a turn-based strategy game, a refreshingly organic sense of persistence. You roam a map between fights, very much on a guerrilla camping expedition rather than returning to safety each time. There's no re-upping at a base, there's no magically automated recovery for your squad (though you can treat wounds and upgrade weapons, if you have the right supplies, at a campsite, but stopping to do so risks being ambushed by enemies). There's, instead, this sense that, the more you push on, the more ragged your mercs become.

It's a smart move, in terms of this feeling like one, long, integrated adventure rather than merely a series of missions. I want to keep playing, keep running up that hill, even though the voices drive me spare, and combing the aftermath of a battle for loot takes almost as long as the battle did. 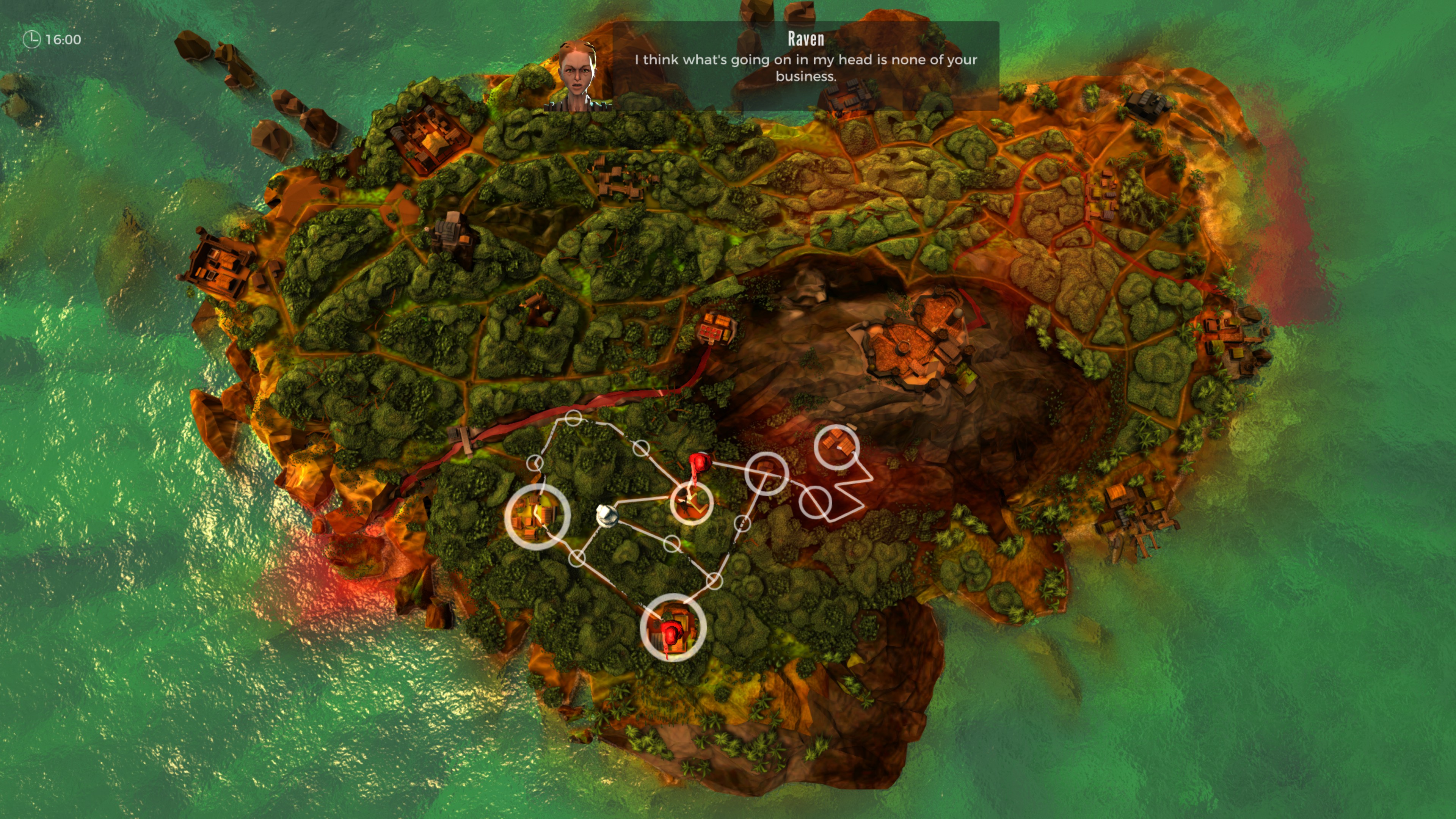 Polish, polish, polish. That's what Jagged Alliance needs most of all. Not more finnickity options, not the wholesale removal of the against-tradition, titular 'Rage' super-abilities (earned by dealing or taking sufficient damage), not anything that would make it more like 1999. We'll see what the final version and long-term play bring, but Rage, for all its low-budget shonk, does feel so far as though it's laid real groundwork for a modern Jagged Alliance rethink, after all those earlier mis-steps.

I hope it can go the distance. I hope I don't have to eat these words in a few months. We shall see. And we shall always have Jagged Alliance 2.

Jagged Alliance: Rage is due for release at some point in the autumn, costing £20, published by THQ Nordic subsidiary Handy Games, and developed by JA Online studio Cliffhanger Productions.