If you click on a link and make a purchase we may receive a small commission. Read our editorial policy.
Developer: Cliffhanger Productions
Publisher: HandyGames

In Jagged Alliance: Rage, I pause before taking the final shot in each mission. If you were to examine my face during these moments, noting the hollow look in my eyes as my cursor hovers over a button labelled ‘Do it’, you might suspect some crisis of conscience. Perhaps I’ve started to doubt the cause my small team of mercenaries has been fighting for? Maybe killing hundreds of nameless soldiers in exchange for cash is part of the problem? Nope. That’s not it. Far from it.

What holds my trigger finger is the knowledge of what comes after I’ve taken the shot. Just like its predecessors from the 90s, JA: Rage is a game of two halves. It’s a turn-based strategy affair in which your small team of elite, grizzled mercenaries trudges through a hot jungle. They take on entire armies of laughably evil bad guys while making quips about how good they are at doing exactly that. But it’s also a game about ensuring your mercs remain armed to the teeth over the course of what will be a long and trying campaign. 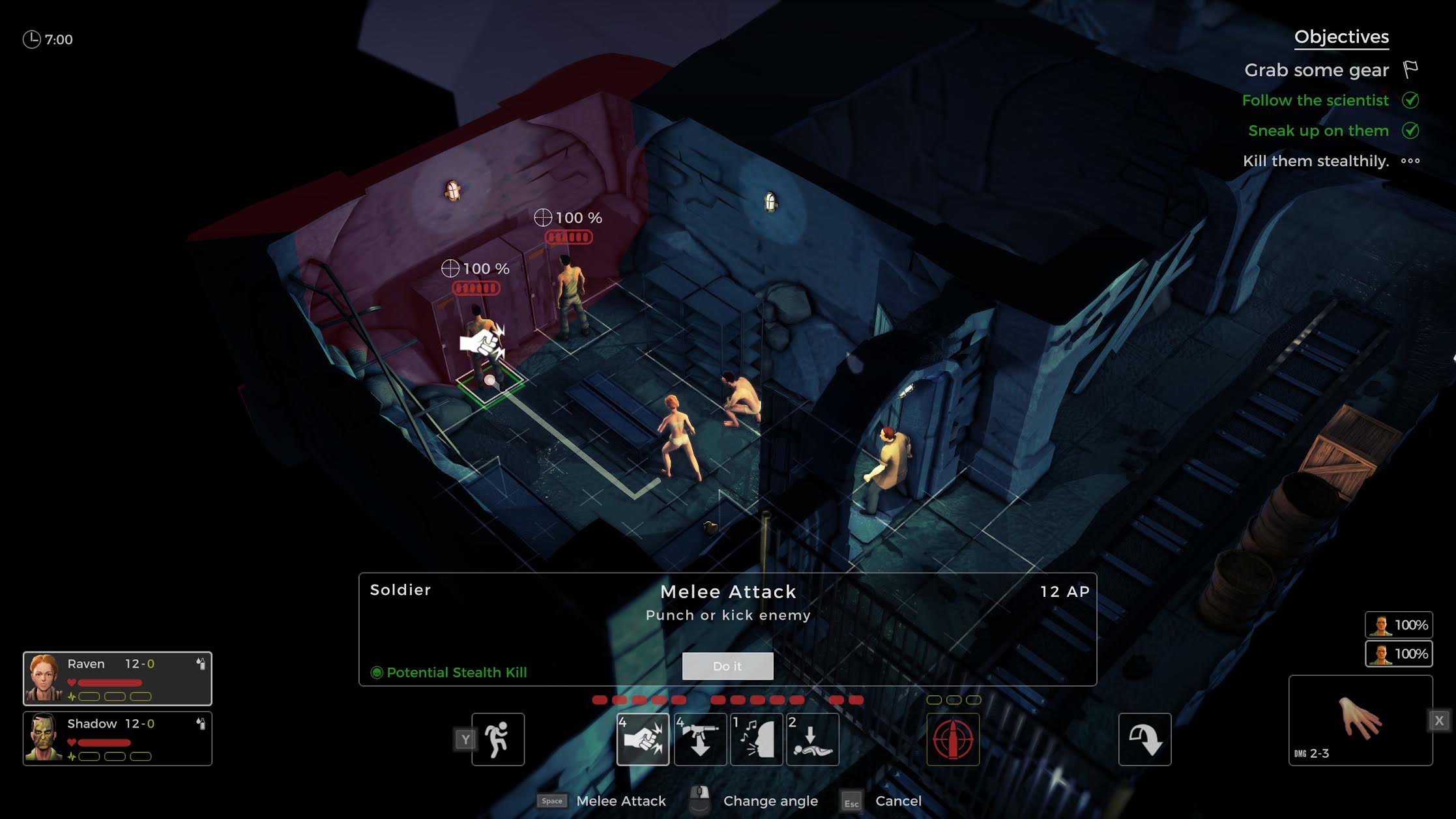 And so once you’ve defeated the enemy force in a mission, you’ll need to start looting. This is a really important part of the process and it’s also a real low point for the game. Looting in JA: Rage is an extremely laborious process and one that’s begging to be replaced by a post-mission screen that collects all of the various items and ammunition you’ve missed in one place.

Instead, you’re forced to track down each of the soldiers you’ve killed and root through their pockets one-by-one, swapping items back and forth as you manage a very limited amount of inventory space across each member of your squad. You’ll no longer need to stand next to an enemy to loot them, but you do need to individually click on each and every fallen soldier across a map that you’ve likely been fighting through for the last half an hour or more. Some of those enemies, by the way, will now be hidden in the fog of war. Rage does not do much to help you out here.

This might not have been a huge problem if the game didn’t absolutely require you to be thinking about your inventory at all times. It turns out everything in Jagged Alliance: Rage is on the brink of falling apart, including the two mercs you’ll select for your initial squad. Fans of the original games will recognise the names here (Fidel, Grunty, Raven etc.), although each of them looks well past their heyday at this point. It’s been 20 years since the events of the first Jagged Alliance. 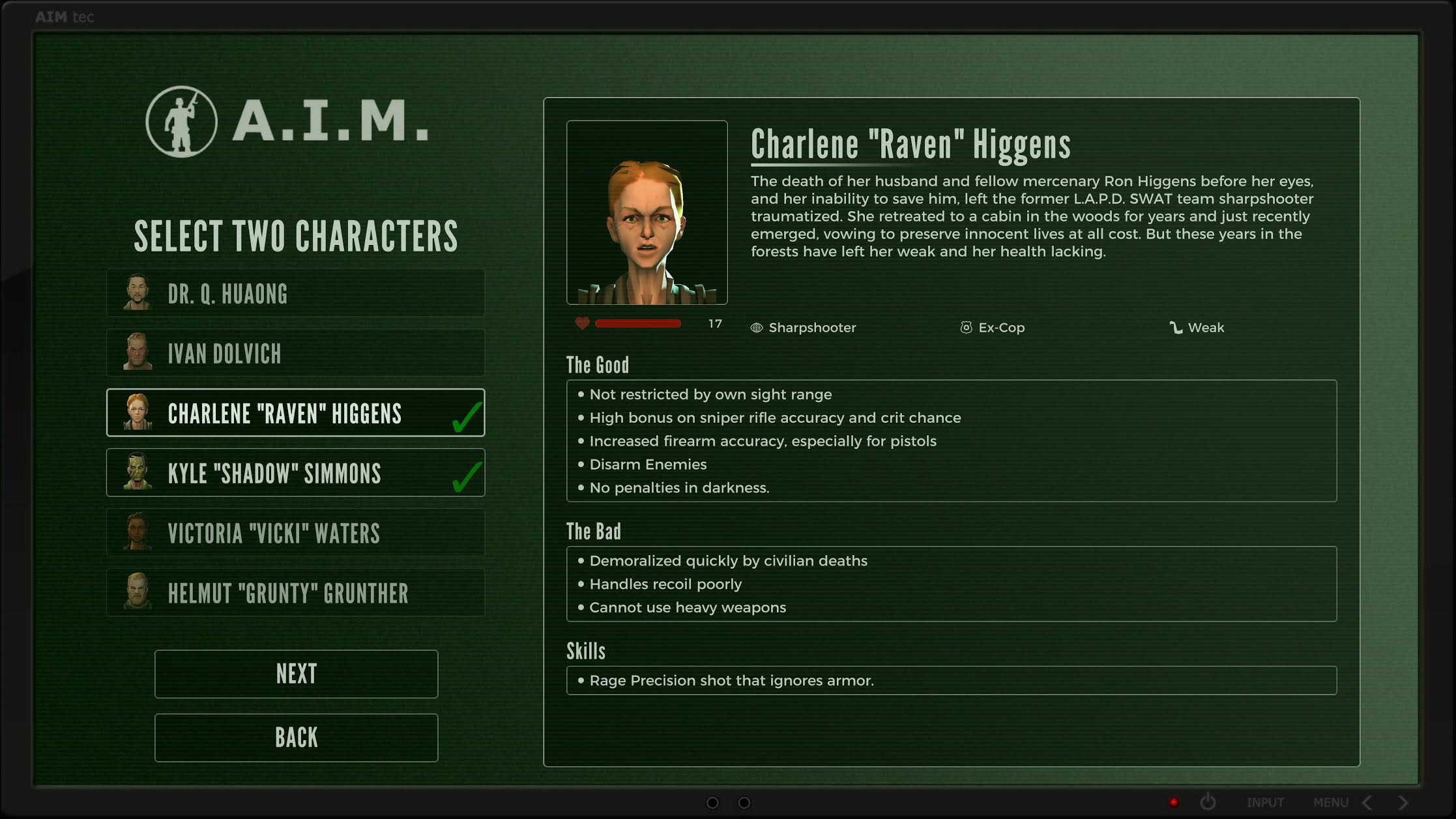 Unfortunately, this idea is also somewhat mirrored by Rage itself. Combining turn-based strategy with a game that emphasises survival is a really interesting thought, but across the board, everything just feels a bit outdated here. A bit broken.

Let’s say you’re running with fan favourite Ivan Dolvich; he’s built like a tank and is meant to be used as such, smashing through the enemy’s front lines and drawing their fire away from others in your squad. Each merc has different amounts of health and may prefer certain weapon types, but there’s also a bunch of other traits to consider when selecting your team. Ivan, for example, can use his large frame to act as a human wall and provide cover for his own teammates. But the flip side to this, and potentially the more interesting mechanic to consider, is that he’s also too big to stay out of sight unless he’s actually lying down on the floor.

As well as ammo, a merc like Ivan is going to be blitzing through your bandages, first aid kits and, oh, you’ll want to keep a sharp object in his pack to remove any shrapnel. Rage’s jungle island setting also means that heat plays a big role too. Your team will quickly become dehydrated unless regularly supplied with bottles of water (clean is preferable, but they’ll drink dirty water and risk infection if needed). If one of your mercs does become infected, or dehydrated, or full of shrapnel, their performance in combat will suffer as a result. 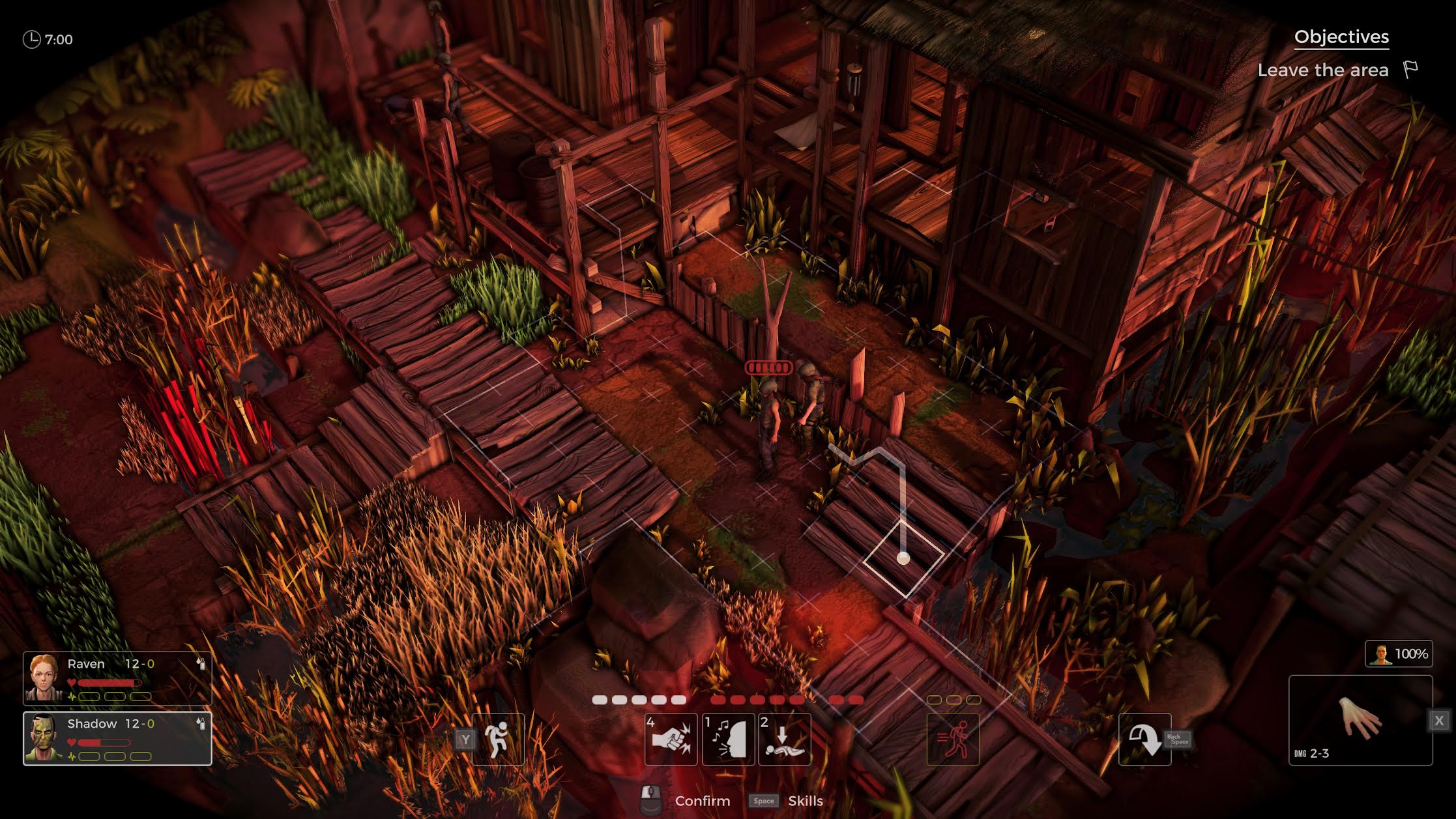 You’ll need to keep your team well stocked with ammunition, of course, but also repair their weapons and armour with parts you find on the field. If you can’t repair them, they’ll need to be replaced outright.

Some have other issues to consider too. Ivan is now an alcoholic and requires a steady flow of alcohol to keep him in fighting shape. Others may be more likely to bleed, or have a higher chance of becoming infected. You can’t afford to skimp on looting at all because there’s just so much bloody stuff you’ll need to stay operational.

Jagged Alliance has always featured a good dollop of management between its combat and, on paper, adding survival elements to that formula doesn’t sound like a bad idea. But in practice, it’s far more chore than challenge. Imagine the Expendables, but after every blazing gunfight, Sly Stallone and his pals have to meticulously take stock of how many dirty water bottles they’ve got shoved into their pockets. 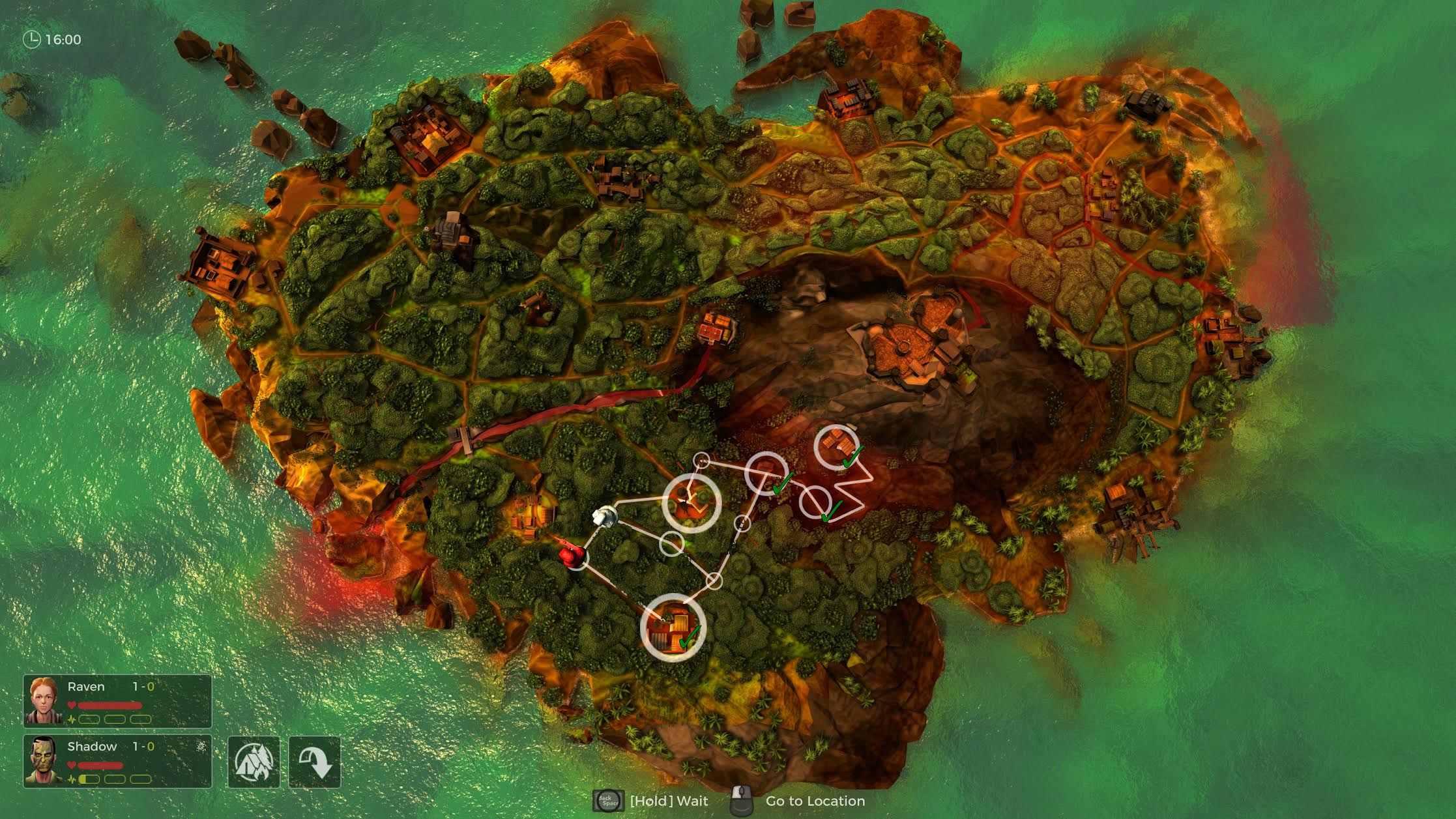 The combat itself can be punishing. Although you’ll enter most missions undetected, it’ll only take one guard to alert the entire map to your presence. You do expand your squad as the campaign progresses, but you’ll be starting the game with just a pair of surprisingly under-equipped mercs and, in most cases, find yourself heavily outnumbered in these encounters. Because of this, I found that stealth played a huge part in my approach to most missions. Much of the game felt like a puzzle to be worked out as I slowly weaselled my way through each map, quietly removing enemy patrols. Entering combat more loudly often felt like a failure on my part, as it almost always resulted in unnecessary injuries and wasted ammunition.

In fact, I can trace most of my success back to a crossbow I found on a table in one of the very first missions. I could have easily missed it, but I’m glad I didn’t, as it proved to be one of the very few reliable ways of killing enemies at range without raising the alarm. I’m not sure if this weapon was intended to be as powerful as it is, but when paired with the mercenary Shadow, it guarantees a silent kill with every hit, no matter the hit points of the target in question. It’s also one of the only weapons that doesn’t deteriorate over time, and you can retrieve any ammunition you fire as long as it hits. I think I killed about half of the enemies in Rage with this weapon alone.

This may have felt a little cheesy on my part, but engaging in actual combat isn’t much fun in JA: Rage. The enemy decision-making is some of the weakest I’ve seen in a modern tactical turn-based game, with soldiers who tend to either rush en-masse towards the player’s position or ignore the threat entirely and stand around waiting to be picked off. The result of this is that gunfights often feel grossly mismatched. Revealing yourself too early can see your squad being steamrolled by a dozen enemy soldiers, or alternatively, the game bugs out and leaves you free to pick off the entire camp as you please. Neither outcome feels all that satisfying to play through.

This isn’t the first time we’ve seen a developer try to recapture the magic of Jagged Alliance and I hope it’s not the last, but I found Rage pretty hard work to enjoy. Much like the mercs themselves, for every positive trait it may offer, there tends to be some frustrating problem to deal with too. The combat is rarely all that enjoyable and a game that requires so much inventory management should do so much more to make that process appeal to the player. It’s hard to recommend Rage over something like Mutant Year Zero: Road to Eden this month, even if you’re desperate to see this series make a proper comeback. Sorry Ivan, maybe you should have stayed in retirement.