If you click on a link and make a purchase we may receive a small commission. Read our editorial policy.
Developer: Mografi
Publisher: Mografi

All my way through playing Jenny LeClue: Detectivú, and increasingly as the game went on, I was certain my overriding opinion of the game would be heavily influenced by how it ended. So much of what the game is about, in terms of its narrative, its meta-narrative and its meta-meta-narrative, leans on its potential resolutions, and your expectations about what those might be. So it is with absolute utter bewilderment that I report to you: it has no ending.

Despite lasting a hefty 12-15 hours, and despite not a single word of warning in any of the game’s promotional material, its store page, nor its Kickstarter, it suddenly ends on a “to be continued”. And I now have the unenviable task of explaining to you why that undermines every positive aspect of this sweet, funny, and beautiful game, without spoiling it. 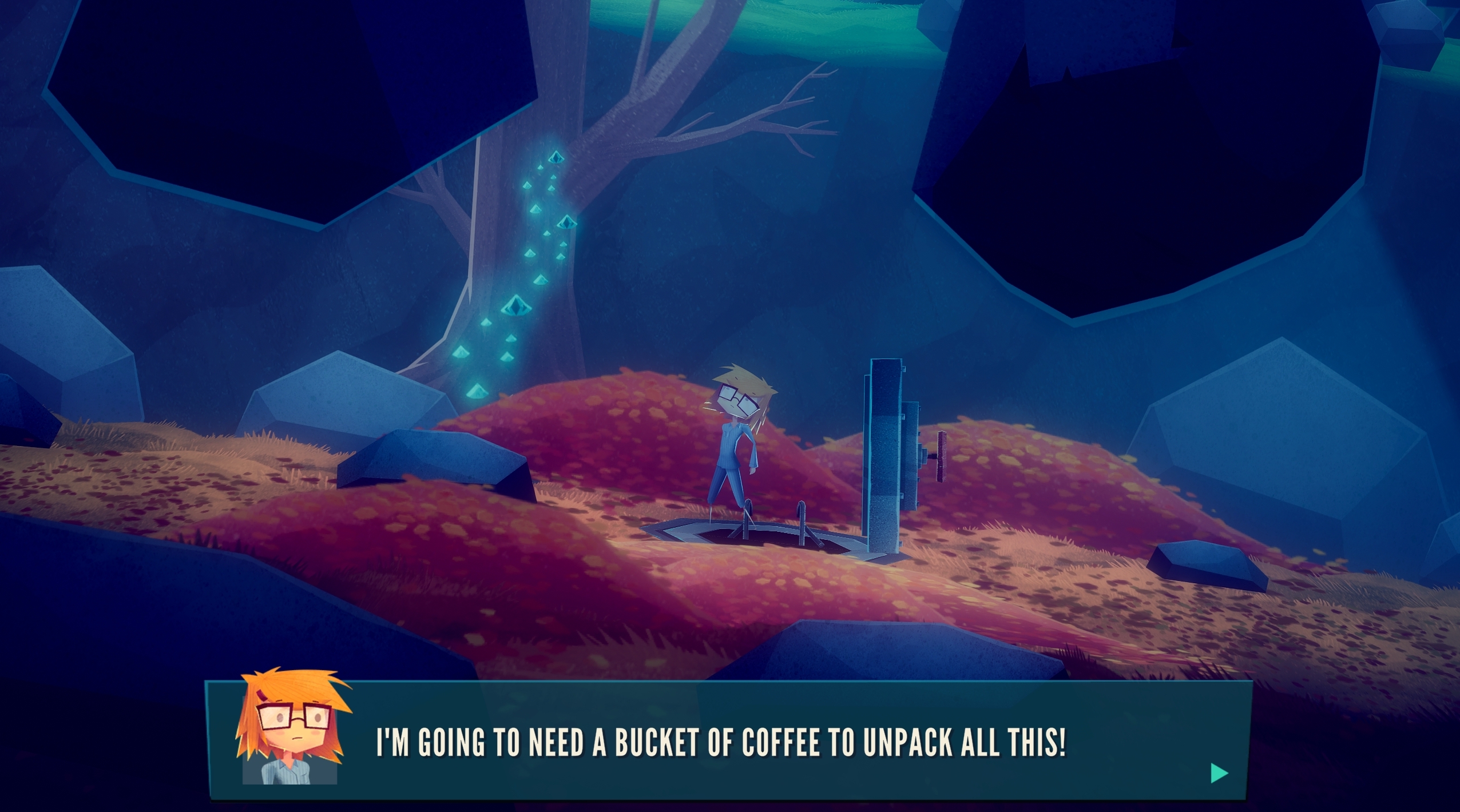 LeClue is, in a really surprising number of ways, a lot like A Night In The Woods. But most especially in the sense that this is a piece of interactive fiction portrayed as a side-scrolling, platform-esque game, rather than as an adventure game. While the vast bulk of your time with the game is spent in conversation, you’ll also spend more time jumping and climbing than puzzle solving.

This is the tale of… well actually, this is two tales. For the most part this is the tale of Jenny LeClue, wannabe teenage detective from the quiet town of Arthurton, who becomes embroiled in a broad conspiratorial mystery of murder, mysterious machines, and ancient town secrets, when her mother is framed for the murder of the dean of the university. But it’s also the story of Arthur K Finklestein, the long-time author of books about the fictional Jenny LeClue, who is told by his publishers that he'll soon lose his deal if he cannot pick up sales with this 36th book in the series. They’re demanding proper murders in his usually sleepy, quaint novels, causing Finklestein to become fractured and torn. He wants to maintain his values, but he's desperate not to see his character lost.

And then in turn, it’s a story about how each story affects the other, played out in the almost conversational back-and-forth between Jenny and Finklestein as the story is narrated. Where Finklestein might narrate that Jenny becomes too scared and decides to return home, Jenny LeClue could respond by saying out loud to her companions that she is going to carry on deeper into the darkness. At the game’s very best, it portrays the playing out of an author not only at war with his publisher, but also in tension with his own characters. LeClue is becoming determinedly more adult, as she surely must so many decades into a fictional series, while Finklestein is wishing achingly that she could stay a young child forever. Both are being dragged into a setting far more outrageous than either is comfortable with. It's about loss of innocence, in and outside its internal frames. 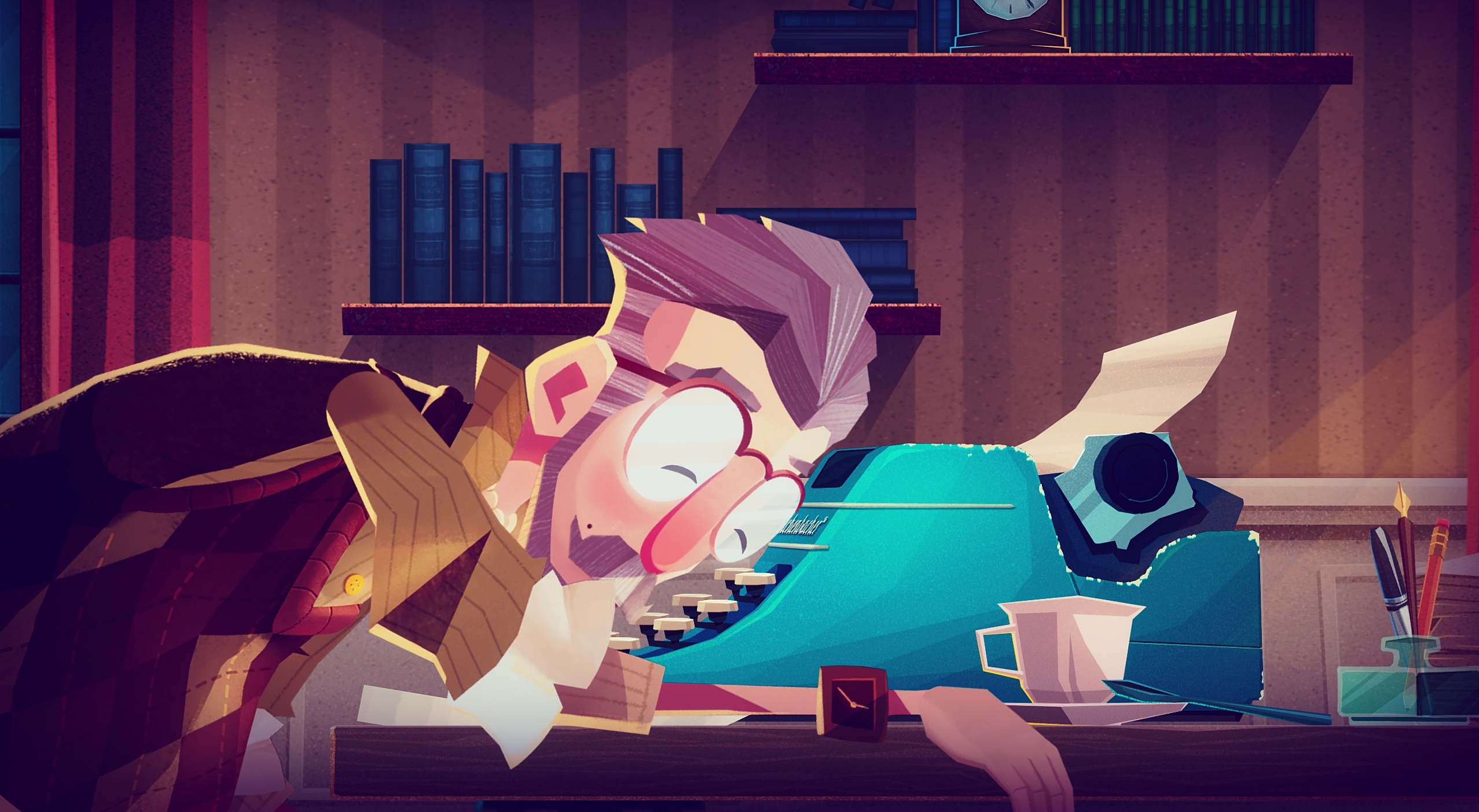 Which all sounds fabulous. And as a narrative construct, it’s quite the achievement. Near the beginning of the game I made a couple of notes, critical of how it was all a little over-cliched and on-the-nose, with character names like “Mrs Humdrum”, and a man having a bad day fishing because he only catches a boot. But of course it quickly became apparent that this was Finklestein’s weakness, not the game’s! He was cliched and hackneyed. Then, as the game’s tale became increasingly ludicrous, it rather brilliantly deflected any criticisms of improbable plotting or unjustified events, because - aha! - that was Finklestein's almost petulant response to his publisher!

The more this folded in on itself, and the more I became fascinated with the push-and-pull of Finklestein’s internal battle, the more I realised how important its resolution was going to be. As the game occasionally pulled back to show the author’s house, his calls with his publisher, I was absolutely hooked. Despite all the serious flaws with the game itself (which I’ll get to), I couldn’t wait to learn how it would all end up. And at the same time, as utterly daft and out-of-hand as the novel’s plot became, I was really excited to see how it too would climax.

It didn’t. And really, for everything else I wanted to discuss about this interesting, flawed, often frustrating game, that overrules. It’s a game that is utterly dependent on its ending, and who knows if it ever will end. Having been Kickstarted some five years ago, and released a full three years after its initial release date (despite the suggestion at one point that it might come a year early!), the game gives me no discernible reason to hold my breath. 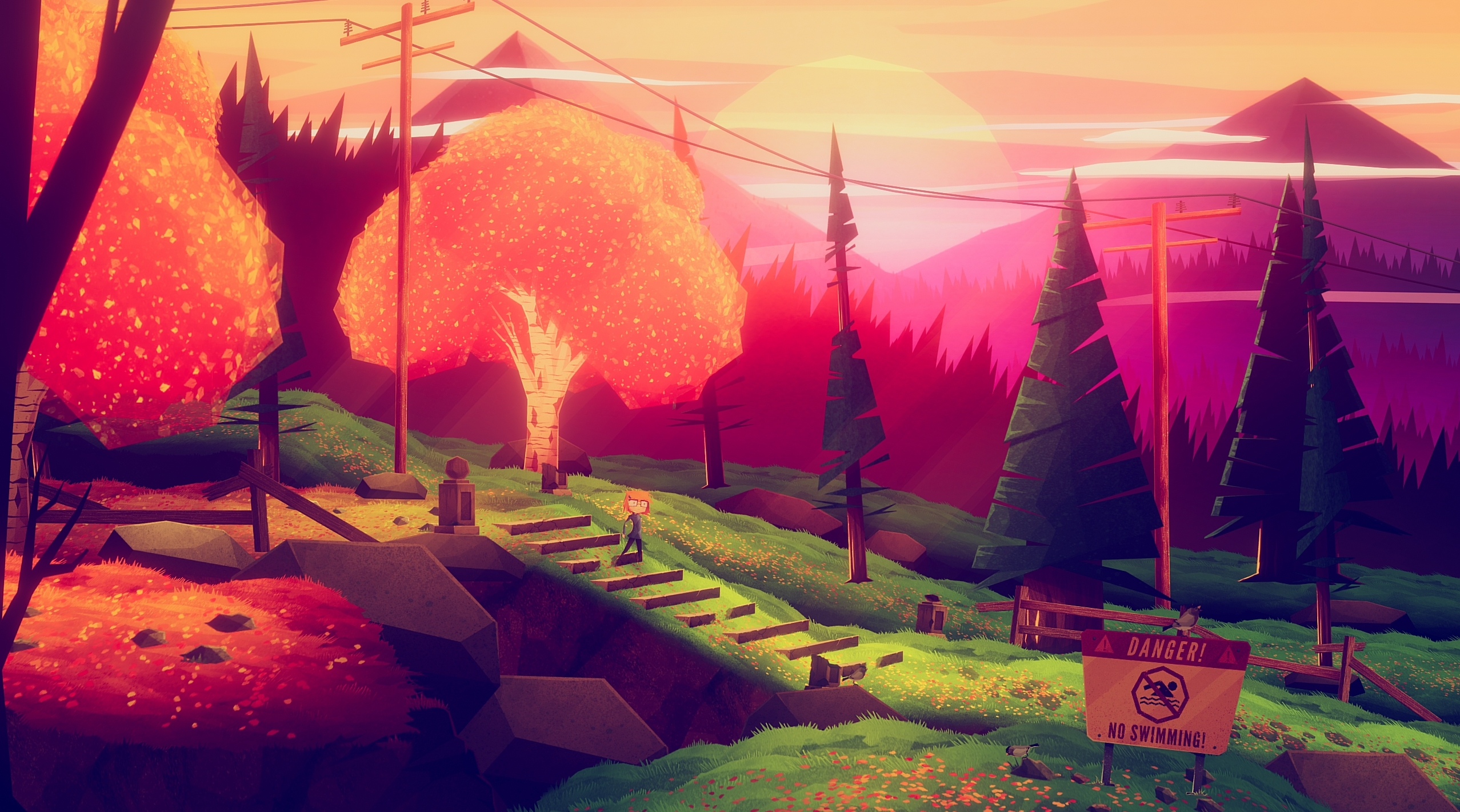 So, to what you actually do. As I began, this game is extraordinarily like A Night In The Woods in terms of its structure. Side-scrolling, you control Jenny as she walks, jogs and chats her way around Arthurton, climbing over obstacles, jumping up to ladders, and occasionally dragging barrels about to reach high places. There’s absolutely no platforming skill required. Indeed, there’s minimal adventure talent needed, beyond some tediously repeating puzzles like rotating dials to line up a pattern, or (bloody hell) a dozen demands to restore torn pieces of paper. No; this is a game about moving and chatting. It’s perhaps most significantly one about dialogue choices, where you can fairly fundamentally change Jenny’s approach to most situations in how you choose to speak to people.

And again, it shines at this. Jenny LeClue herself is something gaming is miserably lacking: a flawed lead female character. While she’s certainly not nearly as screwed up as NITW’s Mae, Jenny is a surprisingly nuanced figure. Initially presented as a sort of archetype of young teenage perfection, a Nancy Drew figure, she quickly reveals some subtly unpleasant character traits. I think my favourite aspect of the first third of the game was learning more about how much I didn’t really like her. And this was never better demonstrated than by how she behaved around another fantastically skewered teenage cliche: the “perfect cheerleader”. Because - and don’t worry, you’ll realise this the first time you encounter her - Suzie is really nice! Imagine it: a rich, pretty cheerleader that isn’t presented as a bitch!

Quite how much dialogue choices affect the overall direction of the narrative I really don’t know. Because as I said, the game is fifteen hours long, and - very disappointingly - doesn’t allow you to manually save, or offer quick routes to make changes upon completion. And for the reason I’m about to get to, I’ve very little inclination to slog through it a second time to see what I can change. 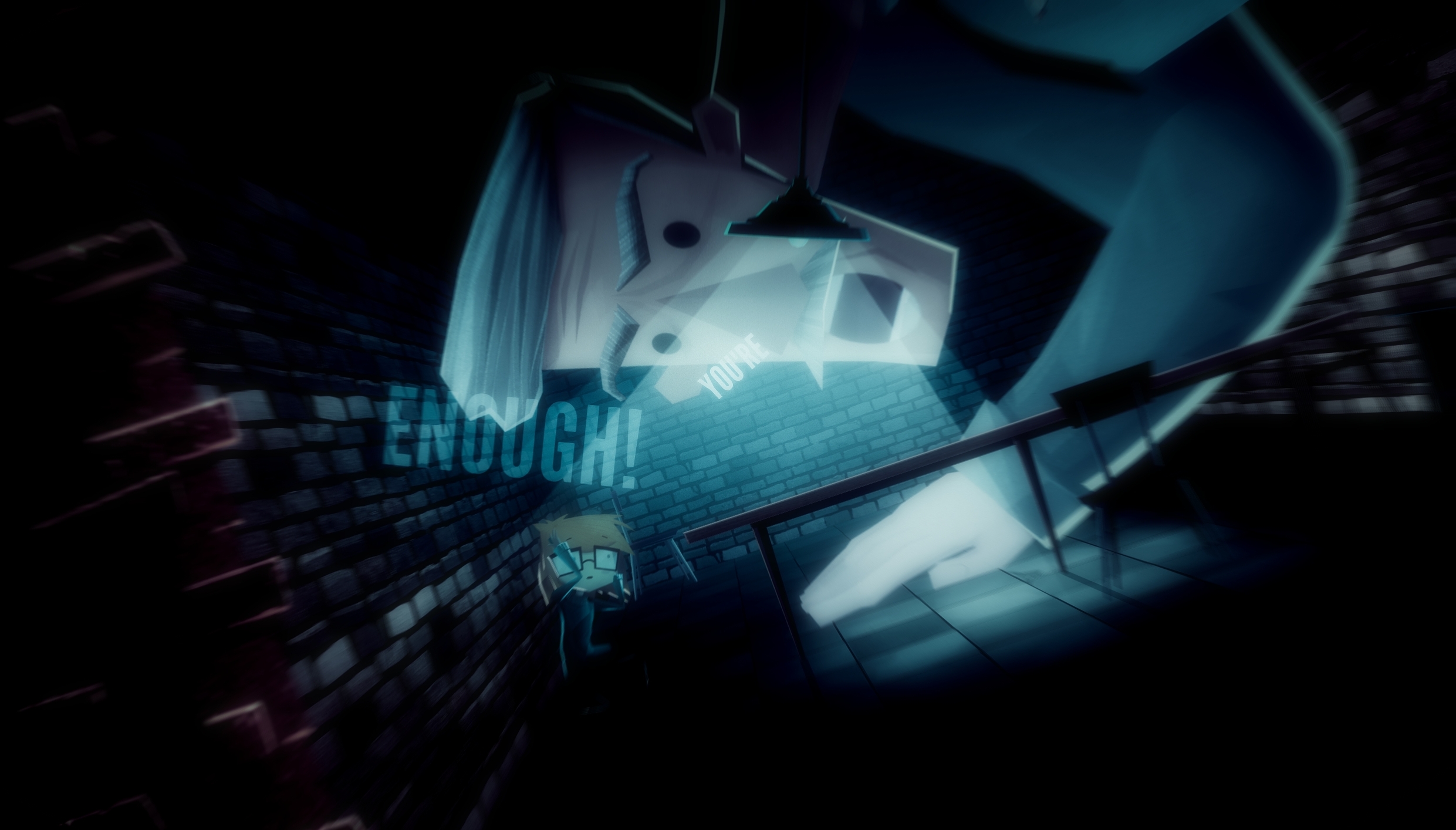 Because oh good Lord, this game drags on. The second half is slowed down gruesomely by a seemingly interminable sequence of utterly dreary underground caves, tunnels, mines and passages, through which you must trudge, climb, and miserably retrace vast numbers of steps, in the name of plodding through “environmental puzzles” (think: laboriously walk/climb/crawl from A to B, click a button, then B to C, click another button, the C to A again). And it all serves to say one thing: a bad accident happened in the mines. Seriously, three hours of this game could be cut and replaced by just that sentence appearing on screen. Which it had already. Many times.

What’s even more maddening about this looping grind is that it robs the game of its other stunning feature: its wonderful art. Jenny LeClue is one of the prettiest games of the year, with a colour palette like nothing else, and animation that I want to sing about. Shower it in art and animation awards from now until the end of time, because this game is beautiful. Until, for some mad reason, it decides to set itself in a grey cave for the bulk of its second half. Utterly baffling.

Actually, I’m not OK with confining the celebration of its art to the inside of a complaint. Here, ridiculously gorgeous game, have this paragraph all to your pretty, pretty self. A good measure of how lovely looking I find a game is the number of screenshots I take as I play. For this: 147. That’s a lot of lovely. 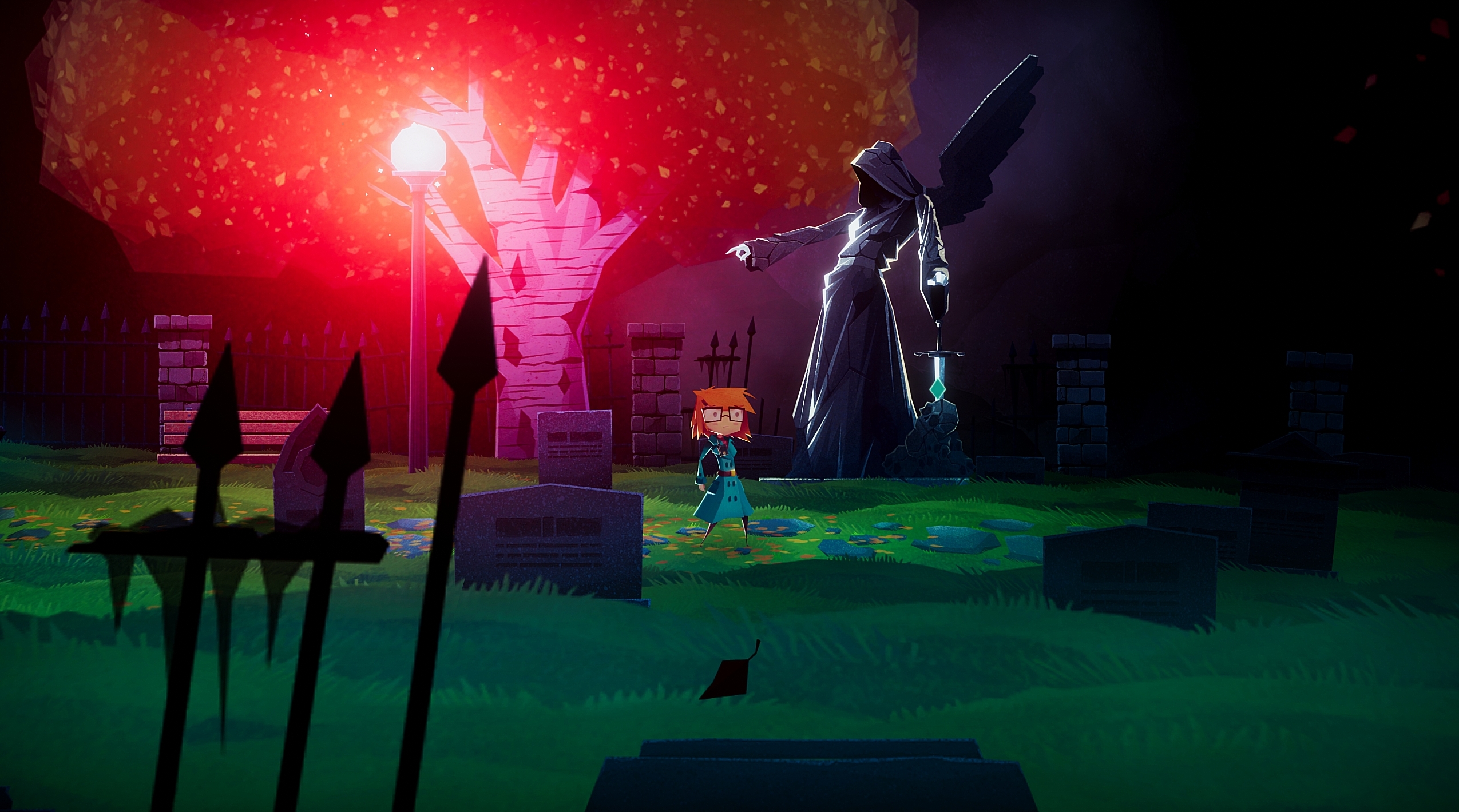 The other - shall I call it an activity? - you take part in as you play is deduction. Or, holding down a button while staring, as Jenny does it for you. Occasionally you’re asked to say which two or three pieces of evidence out of five or six point toward a conclusion, and you can fail until you get it right. Again, it’s nicely presented, but your role is minimal. Then there are scraps of postcards and stickers to find, for no real reason. This is first and foremost a visual novel, with all manner of distractions and faux-interactions, and that’s just fine, when those distractions aren’t wasting too much of your time. When they are, it sinks the otherwise buoyant atmosphere of the game.

The other atmospheric disappointment that's worth noting is the lack of voice acting. Trailers showed it, the Kickstarter stretch goal to include it was reached, and yet the game has none. It's actually not that big of a deal, but in case you were very reasonably expecting it, be warned it's not there. 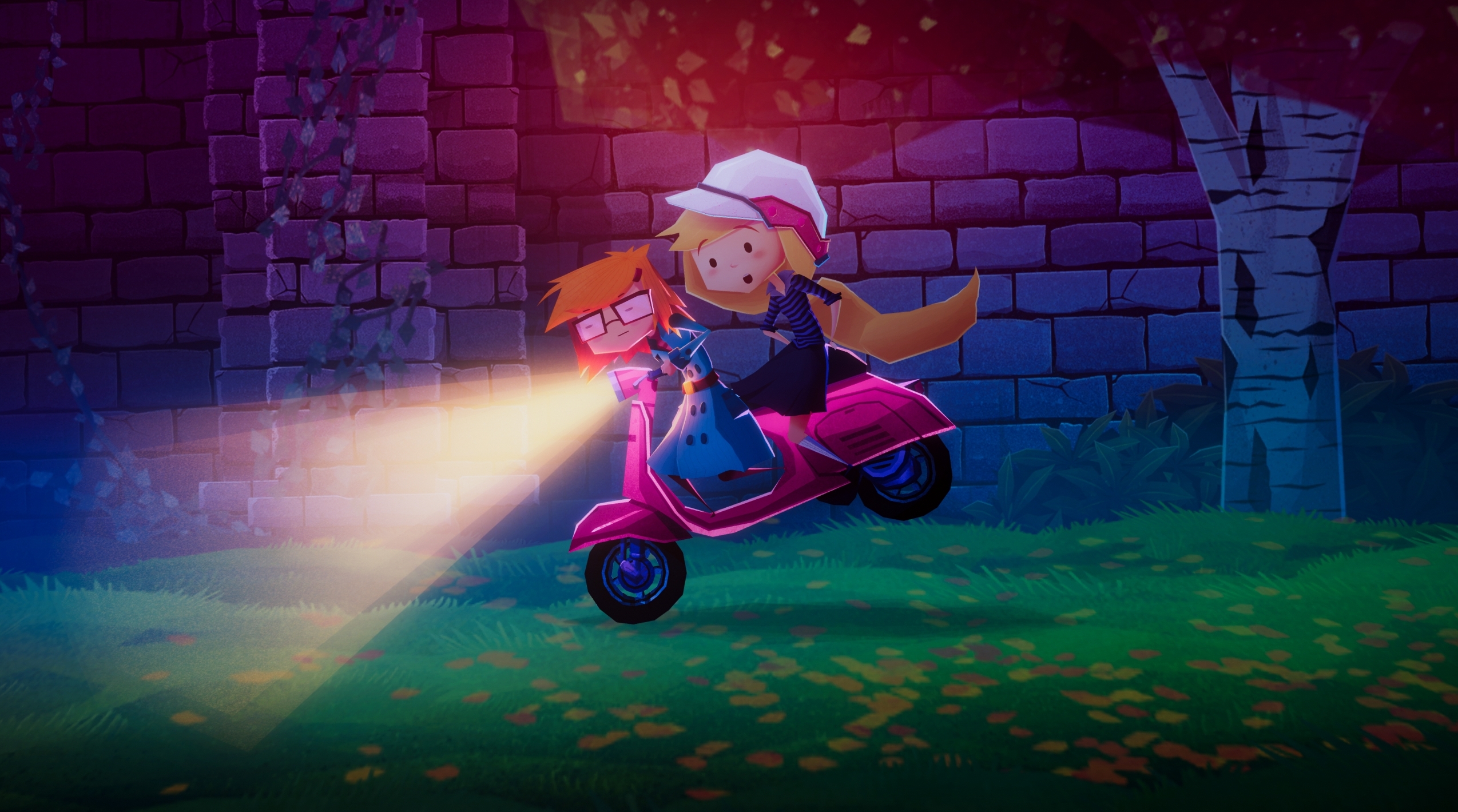 I had long stretches of absolutely loving playing Jenny LeClue, as disappointed as I was by the unengaging nature of the deduction. But it’s also impossible to extract those times from my expectations, from my desire to see where all those threads were heading, to see what means and manners it might have used to resolve itself. That it just didn’t, really pulled the rug out from underneath me. To be continued? When? And do I have to pay again to receive it? Another five-year Kickstarter? And why on earth is this game not being openly sold as “Part One”?

I've often argued that endings are given too much authority over our appreciation of narratives. How whether we enjoyed the journey is far more important than whether the denouement delivered on our hopes or expectations. But when so much of my enjoyment was inextricably linked to my postulating and speculating on what it was going to mean, that emphasis really shifted. Not least because so much of my anticipation was wrapped within its meta-layers, intrigued by where its mixture of hyperbole and pessimism would eventually reach.

The result is a visually stunning game, belying its origins as a creation of two animators, alongside some delightful writing, weaving a complexity of narrative that completely surprised me. But one that offers the player far too little actual investigating, and in the end, far too much tiresome wandering. And then doesn't end. Although this review now must.