Joseph DeLappe is no stranger to using games to make big political points, and his newest art project is just as upsetting as its description sounds: using real gun violence data, a self-playing version of GTA V will run for one year (between 4th of Julys) and will visually display the accurate number of homicides involving guns each day. This is all streamed on Twitch for your enjoyment (?) education (?) anger. Hopefully, it can serve as a call to arms, or whatever exactly the opposite of that is called.

So today I am releasing a new project. Elegy: GTA USA Gun Homicides is a self playing version of GTA. The project is essentially a game as a data visualizer - a daily reenactment of the total number of USA gun homicides since January 1st, 2018. The project works from a daily update of gun homicides as scraped from: http://www.gunviolencearchive.org/

Each day starts at midnight USA central time at 1 death and so on, repeating each day. My intention is to run this 24/7 for the next year until July 4th, 2019.

Feel free to share. I will be getting further content and documentation up on my website and youtube in the coming days. Special thanks to my coder/collaborator on this project Albert Elwin and project consultant James Wood.

You can start watching the Twitch Stream here.

One of the first questions for DeLappe is about whether every citizen represents at data point or how this is all being created under the hood. His response is as follows:

I'll have more information once I get this up on my website - not much room for descriptive info on Twitch. These are NPC's (non-player character), essentially bots, AI controlled avatars that populate GTA. Each one that dies is added to the body count at the bottom of the screen. Some have guns, some do not. We've armed them according to the percentages of different weapons used in homicides, from hand guns to shotguns to rifles. There should as well be 22% of the victims being women, that goes as well according to the statistics of yearly averages for homicides. Hope this makes sense? The road is just part of the Grand Theft Auto game which we are using as the platform for the project. Think of it as a found object in a way - our setting or stage if you will.

This is probably a good time to bring up a project DeLappe made a number of years back called Dead-In-Iraq, where he did similar work using the video game America's Army to make a political point. America's Army was a free military recruiting online game, and well... just have a look. This all feels pretty painful, even a decade later.

"do that some where else or have DC make a memorial" 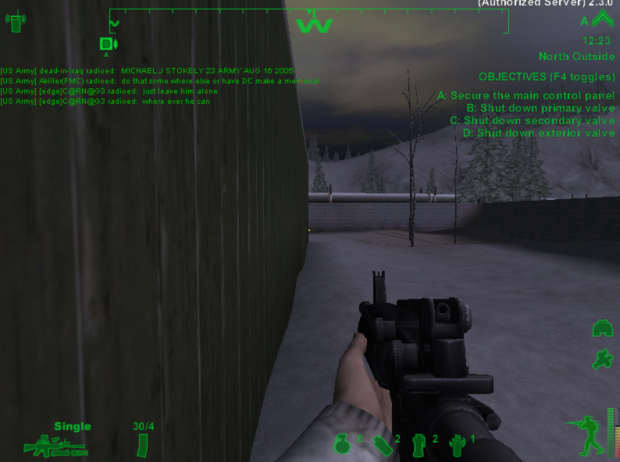 For a slightly lighter note to end on, please enjoy this footage that follows a deer for a day through GTA. I promise this won't make you sad. It's just a deer, doing deer stuff. At one point a guy punches it, and I didn't love that, but otherwise just a deer walking around, not being aware of war crimes or my nation's lack of common sense gun law reform. Just a deer. I'm so jealous of that goddamned deer.