Multiple personalities are kinda SUDA51's bag. Actually, everything about Killer7 is extremely SUDA51's bag. If a bag came to life and started monologuing during a SUDA51 game, that would also be on the level. What I'm saying is, if you've never noticed, I do believe that this gentleman has a predilection for making odd choices. And that oddness is perhaps at its most accessible (?) in killer7, a game that has only been on Gamecube and PS2 before, but now there's a remastered PC port coming. Can a No More Heroes remaster be far behind? Stop, Brock. You're getting too worked up for a Sunday morning.

Speaking of getting worked up, Killer7 revolves around a horny old man. Yeah, I dunno, this is just how I remember it. So there's these dudes called Heaven Smile. Except they aren't dudes, they're explosive entities that just look like dudes. You gotta stop 'em. And the way to stop 'em involves get this grandpa all worked up -- because that allows him to access the spirits and special powers of seven different assassins, each with their own skill sets. It's the only game of Suda's I haven't finished, but that's because I am a dumb man who lost his GameCube. So I'm pretty excited to take this new PC remaster for a spin. 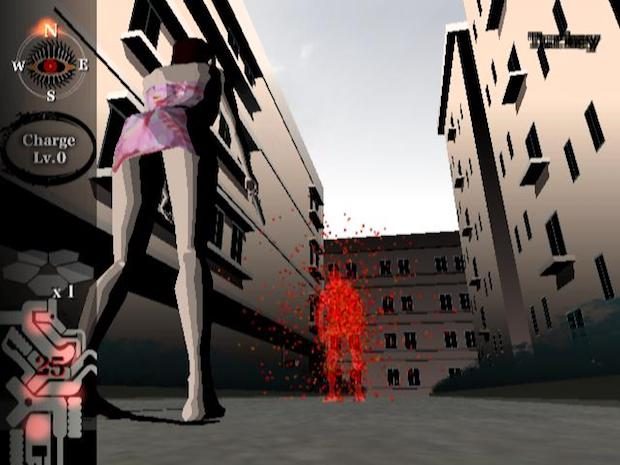 It's a mix of on the rails and first person shooter and elderly horn-dogs and international conspiracy theories. You know, just normal genre stuff. Also, one of the hitman personalities is named Kevin Smith and that is always funny to me.

Check out the trailer for the PC port here:

You can follow the game on Steam right now. There's a release window of autumn 2018. No More Heroes should be coming shortly after that... in a just and good world. Come on, Grasshopper. Give the people what they want. The Silver Case: Ward 25 was fine and all, but you know what we're clamoring for.