If you click on a link and make a purchase we may receive a small commission. Read our editorial policy.
Premature Evaluation is the weekly column in which we explore the wilds of early access. This week, new columnist Steve Hogarty has contemplated death and weeing in Kynseed, a life sim RPG.

There’s nothing I enjoy more than the interminable march towards the cold embrace of my own grave. When I’m done just throw me in that soily bad hole where skeletons live, I don’t mind. I scream in delight with every fresh wrinkle discovered, each grey fleck found, every stabbing abdominal pain after thirty seconds of light exercise. Let me glide happily towards that eventual death, like a rotten log approaching a waterfall, or an expensive phone vibrating towards the edge of a dinner table. Who’s calling? It’s the yawning void of the infinite. Do you accept the charges?

Kynseed is all about ageing and growing and dying. Or at least it will be when it’s finished. It’s an old-school lookin’ RPG from some ex-Fable developers, like Stardew Valley but with even less to worry about. There is a farm to look after, just a little one, but it’s not the point of the game. You can pop a few seeds in the ground and watch them grow, give them water and harvest them, pop ‘em in a stew and feed that stew to a passing dog. There’s a cow you can milk, if you can find a jar, and a market where you can sell cabbages to gullible children. 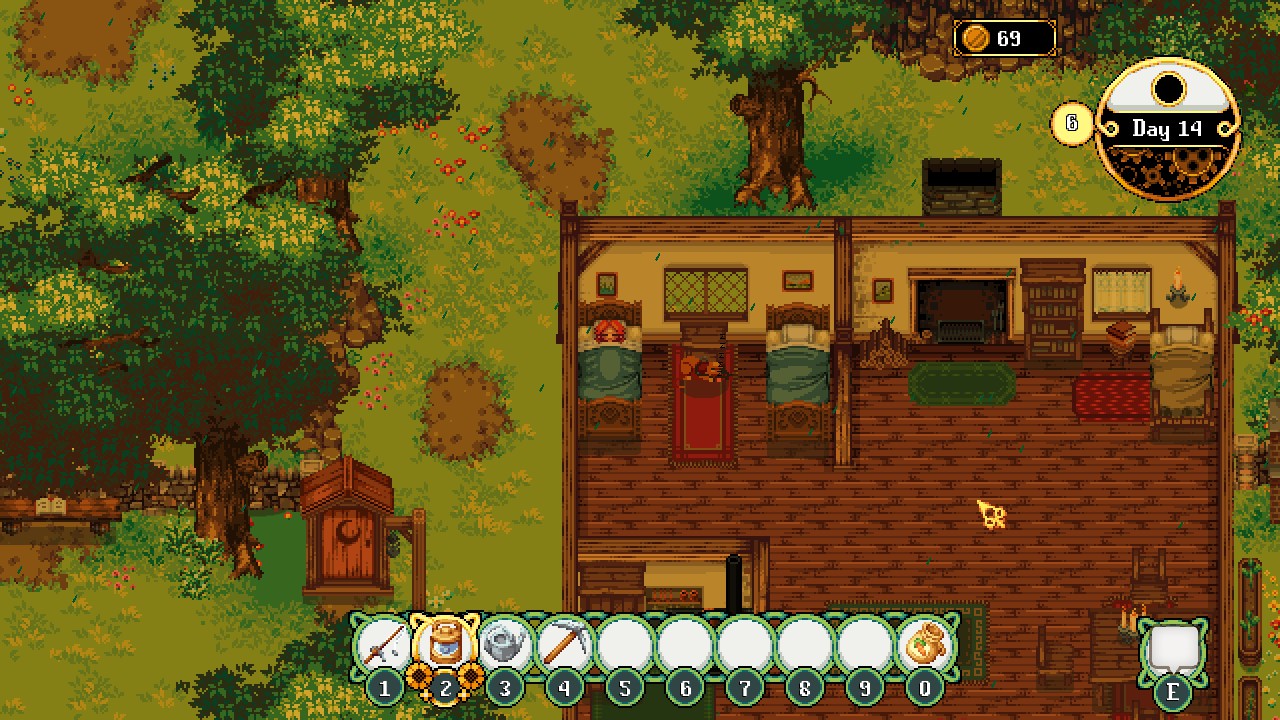 But you’re free to ignore all the usual horticultural distractions on offer, and simply immerse yourself in this bucolic sandbox of post-apocalyptic faery myths, ancient woodlands and British folklore (insofar as there’s a maypole). There are already distinct vibes of Fable’s Albion in here, felt in every druidic stone circle, every incongruous wicker-man construction, and in the relentlessly pun-heavy writing throughout. Characters are named things like Ginger Nutt and Theresa Green.

Kynseed’s swollen laundry list of upcoming features hints at a meticulously simulated, interconnected and intergenerational society of complex and evolving characters, each with their own wants, hopes and fears. In the game’s barebones Early Access state, however, these virtual minds are more singular in their desires. Press CTRL to reveal the idle thoughts of passing villagers, Theme Park style, and you’ll see that every last one of these artificial intelligences is cursed to strut up and down the country lanes in constant need of a piss. 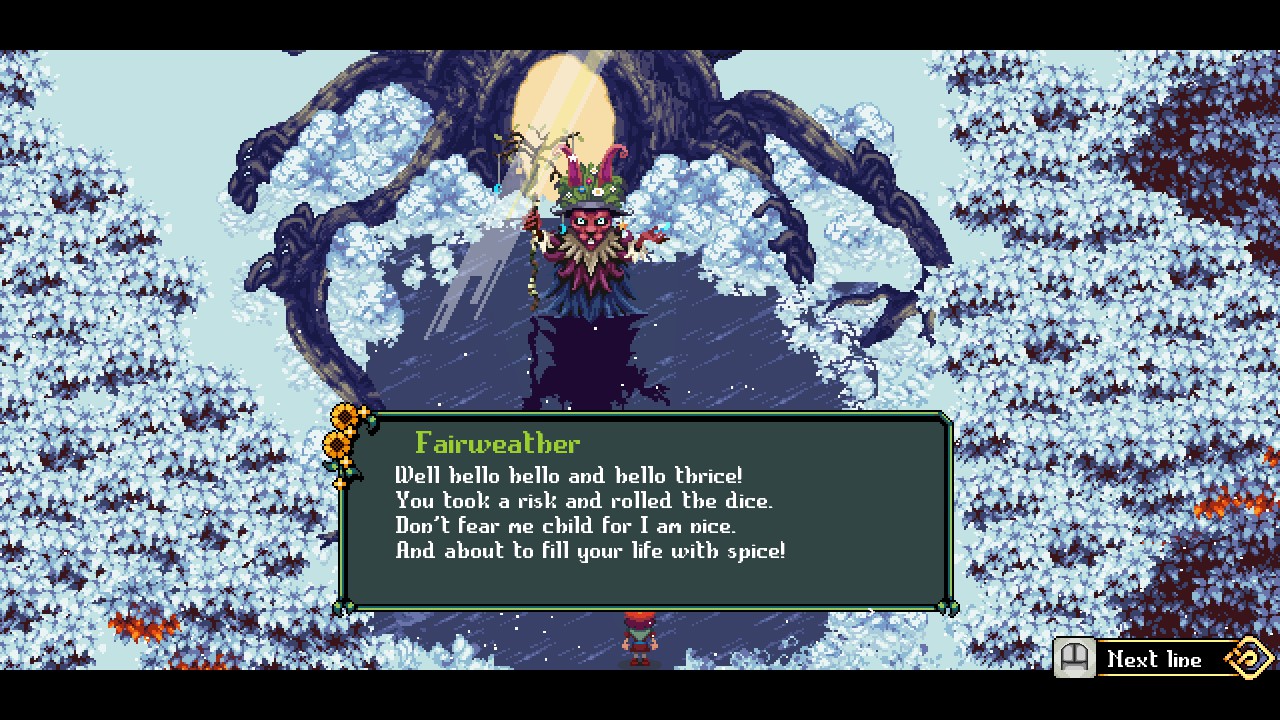 Which is, in my own experience, an authentic portrayal of the human condition. Our bodies are just fleshy bags of hot urine, constantly filling up and emptying out again, like a horrible logic puzzle with no correct answer. Reflecting the inhabitants’ perpetually engorged bladders are the many old-timey wooden outhouses scattered about the world of Quill, which you quickly learn are a good place to make contact with new friends, just like at Glastonbury or a motorway services.

When they’re not en route to or from a toilet, the NPCs occasionally give the impression that they’re doing things for some non-piss-related purposes. Here and there you might catch sight of a character requesting a specific item from the village shopkeeper, and promising to return in a number of days to collect and pay for it. It’s a teeny glimpse at the wider framework the game is slowly building towards, in which you’ll one day be able to own and operate your own business in town, marry and have children with whomever you like, and put those kids to work in the fields for profit. 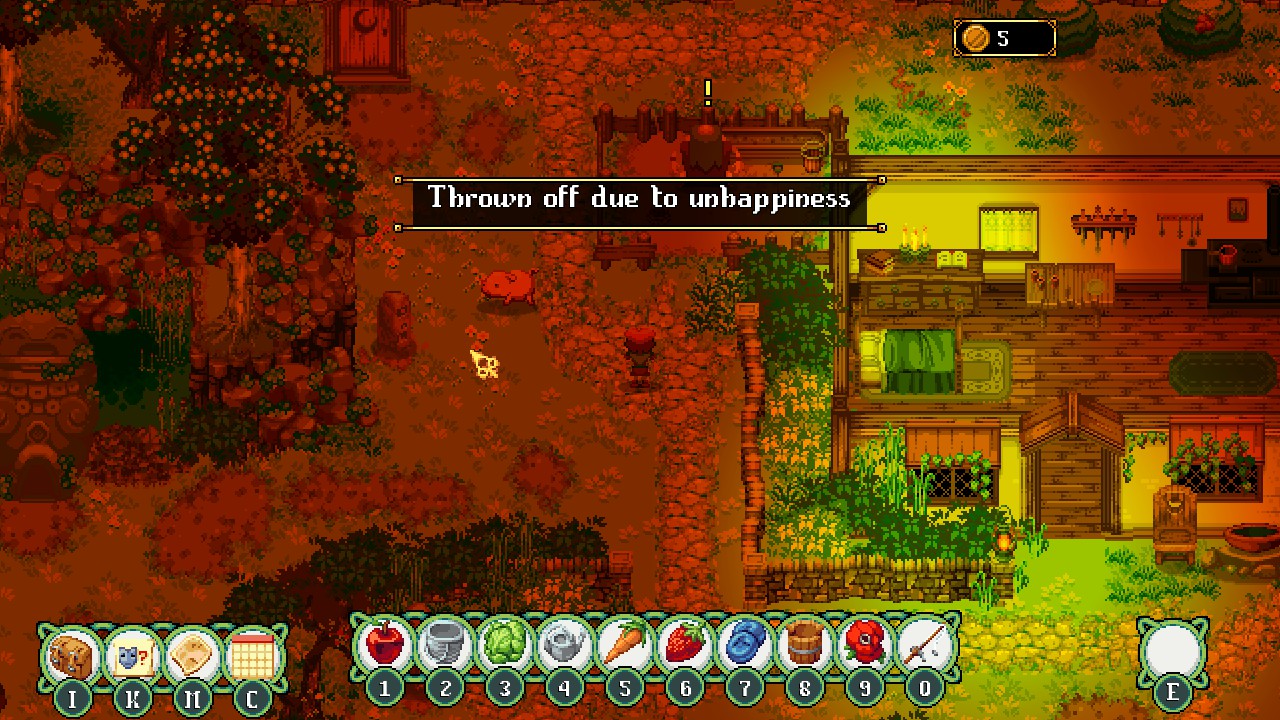 It’s still very early days for Kynseed, and as such none of these dynamic systems are in place yet. In fact there’s not a tremendous amount you can accomplish in this Early Access build. Your primary task is delivering honey and milk to the dozens of residents of Quill, which is the game’s way of prompting you to poke about the world and meet the locals. Besides that, you can ride around on animals, eroding their fragile emotional stats until they chuck you off, which displays the inadvertently poetic placeholder message “thrown off due to unhappiness”.

You can fish too, though the rudimentary fishing mechanic is even more perplexing than Stardew Valley’s. There are bugs to catch, dogs and cats to befriend, chickens to stroke in the middle of the night. There’s a market in the town square each week, with pig racing and a stall where you can set the price of and sell your own vegetables. You can dig up ore in mines and turn it into tools in a blacksmithing mini-game, or find new recipes and cook dishes in a cooking mini-game, though neither of these activities have been tuned in a way that’s particularly compelling. This is a roughly outlined prototype that hints at a world still mostly tied up in design documents, and early investors will be taking on the role of playtester. If you’re a retired Stardew Valley player looking for your next fix, Kynseed is still too vestigial to recommend. 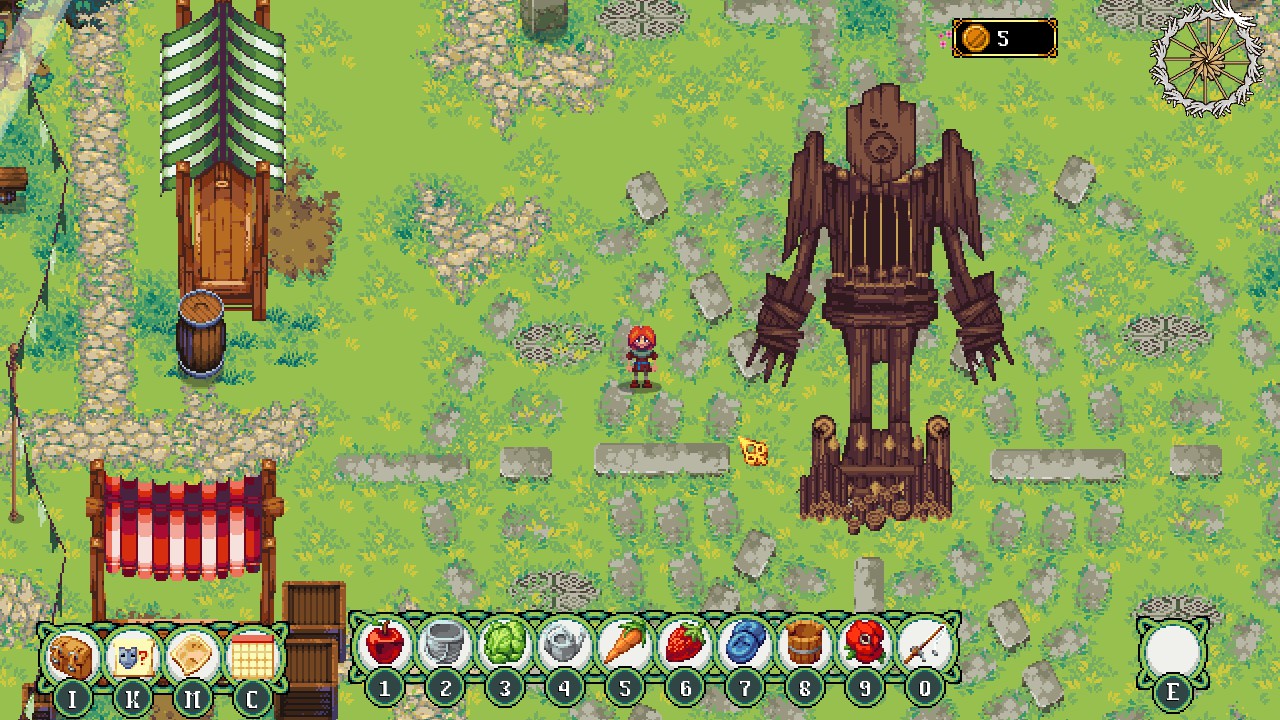 Looming largest on the to do list is the game’s central conceit: the ability to grow to adulthood, spring off some offspring, expire, and then continue your legacy by assuming the role of one of your children while your previous body rots in the ground. As you play, every action you take and every move you make will leave an indelible mark on your family’s reputation, which can be passed down the generations until, many hundreds of years later, you might be charged a higher price for a bag of flour because your great great grandmother once fed laxatives to a pig.

That is the plan at least. For now everybody is locked in a perpetual state of youth, pets and all, cursed to wander the game world never knowing death’s sweet kiss. The day-night cycle gives way to changing seasons, sure, but new tasks and events soon stop appearing on the calendar, ostensibly because they’re still under development, but I prefer to imagine that the population of Kynseed eventually succumbs to ennui, gripped by an existential crisis with the dawning realisation that they are trapped inside a stuck clock. Because if there’s one thing more frightening than dying, it’s living forever. That or spiders.