“That’s the Ancient word for ‘writer’,” says Jon Ingold, pointing to some indecipherable symbols on his business card. “What it breaks down to is ‘Person-who-speaks-without-speaking.’”

Ingold is the writer for Heaven’s Vault, an upcoming sci-fi adventure from Inkle (the folks behind 80 Days and Sorcery!) You play an archaeologist investigating the remains of an ancient civilisation in an otherworldly “Nebula”. He and some others from Inkle Studios have been watching me waddle around a garden of strange monuments, trying to discern meaning from the faded words I find carved into trees, walls, rocks and reliefs. In creating this game, they've constructed a fictional language of over 1000 words. They’re so proud of this new language, they’ve even used it on their business cards.

Ingold examines a card from Joseph Humfrey, the studio’s co-founder and programmer who is sitting nearby. He thumbs over the pseudo-ancient script.

This gives you an idea of the linguistic somersaults involved in creating a dictionary of symbols for a videogame. But it might not reveal much about how it actually plays. To describe it bluntly, it’s a third-person adventure about clicking on old rocks. You walk around as archaeologist Aliya Elasra, chatting to your robot colleague, Six, and building a relationship while bouncing ideas off him. Aliya wants to know more about this lost civilisation, while the straight-faced droid is there to act as a Dr. Watson of sorts, although Ingold says your relationship with the bot will develop differently based on the way you speak to him.

That’s partly down to Inkle’s spidery ability to track decisions and dialogue across a long story. The chatter here feels more nebulous and unpredictable than in 80 Days. You don’t always get clear dialogue options, often needing to infer the tone from a few words, similar to the curt single word prompts of a Mass Effect conversation. A recurring choice is to either “Question” something that Six has said or to simply “Reply”. But for me, the robo-human partnership is secondary to what’s written on that dusty old plaque over there.

The language is conceptual, like Ancient Egyptian hieroglyphs. Each symbol has a meaning, and when thrown together with other symbols that meaning becomes altered and compounded. For example, one glyph might mean “person”. But when placed next to a glyph for "knowing"  the word may become "Goddess". Put three together, let's say "person" + "knowledge" + "person", and you'll get "Emperor". The "Person who knows people".

"A rather benevolent, parental term," Jon would later tell me. 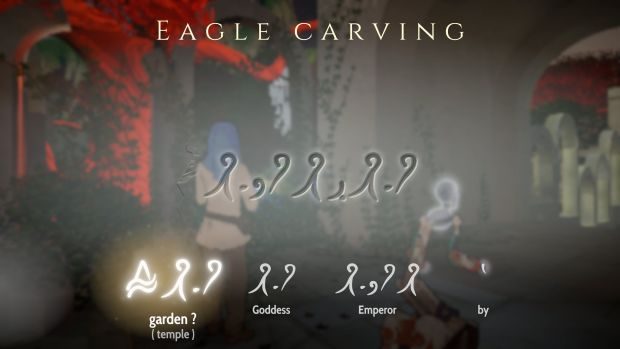 As you can imagine, coming up with a whole language is hard. But Inkle has divided the work. Humfrey designs the individual symbols, coming up with the looping calligraphy and cryptic brushstrokes. Then he hands them to Ingold, who assigns them a longer meaning by smashing symbols together in certain ways to form useful compounds. In short, it takes two people to make words.

As for translating them as the player, this is a matter of trial and error. When you see a phrase etched over a gate, you’ll get multiple choices. Maybe the first word means “garden” or “temple” - it’s your guess. Previous guesses will inform future ones, and you’ll see the words you recognise (or rather, words the game remembers on your behalf) floating above the ones you don’t yet understand. It’s hard to explain but basically this is a game of deducing meaning from previous guesswork, and understanding the context of a written message will help you out as much as discerning the symbols. It's sort of a ‘Guess Who’ but for words. Slowly, theories begin to form about this lost society, which are saved in a timeline you can examine at any point. It’s a good balance of discovery and logical inference, but it’s important to note, says Ingold, that theories come with doubt.

“An archaeologist is a kind of detective,” he says. “The joke is that they’re a detective that’s very late. Unlike a detective game where at the end the murderer stands up and says ‘You’re right, it’s a fair cop, I did do it’, an archaeologist can never know.

“All you ever have is the best theory that you’ve got.” 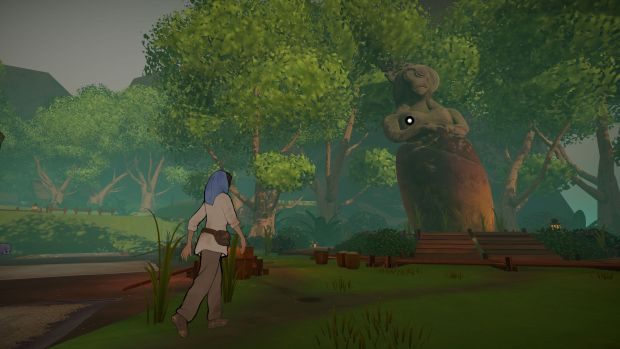 Unfortunately for me, I was approaching it as an alumni of Sethian, another language-decoding piece of interactive fiction. Ingold has played this, he says, but their own approach is different. Heaven’s Vault is meant to be more welcoming than the alien parser of Sethian. You can translate a word badly and carry it around, yes, basing yet more translations on your inaccurate assumption. But a wrongly translated word will eventually be revealed as incorrect if you find an inscription that suggests your previous ideas were all nonsense. For example, a word you think means “eternity” may be revealed to be something else, simply by Aliya finding another inscription and straight-up telling you “no, this is wrong”. There’s some process of elimination to this, and you could approach it as a “collect all the words” game. I think you’d be missing the point, but it’s still a valid option.

“We were really keen to make the translation feel like you’re really translating a language,” says Ingold, “but we’re perfectly happy for it to be the Guitar Hero of linguistics.”

Despite that approachability, the Ancient text still seems to function as a language. A symbol for “of” looks like a single quote mark – something I learned early on. Later, I found a compound word with “of” included, and guessed that it might mean “of you”. A seemingly rudimentary but effective way of saying “your” in this tongue. There were a lot of moments like this, my brain trying to place wavy lines and upended triangles in the context of a three-word sentence.

I can see some players becoming frustrated with the uncertainty of these moments. It’s pure guesswork, and it takes traipsing around looking at stone after stone, inscription after inscription, to feel confident about any of the words. In all my time playing I felt sure only with the words: “of”, “your”, “emperor”, “god”, “person” and “garden” (and thinking back, I may be wrong about any one of these). That lack of feedback and direction will doubtless alienate some players, but it felt like a welcoming mystery to me. I was sorry I had to stop playing just as I was approaching pre-school levels of understanding its lost lingo. 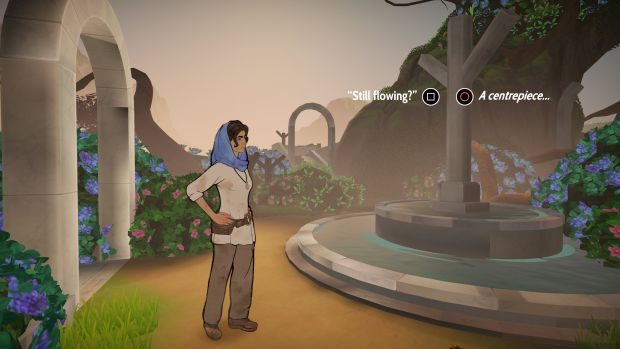 There’s a magic to making a functional writing system, I feel, even if it will only ever be used by the players of a single game. I’ve felt that before with Sethian and have been jonesing to see it done again. Again, the approach is different (you don’t get handed a notebook with half of the symbols figured out for you, for instance, but neither do you flounder for ages trying to input the correct sequence of symbols into a computer that is basically an alien MS-DOS). You also have the benefit of context – a real place to walk around and contemplate. An inscription is its own clue when it’s written over a gate that leads to a place with lots of gravestones. By comparison, words carved in walls might give the impression of graffiti, colouring how you might translate those words.

If I have concerns, it’s with the presentation. The environments seem to have improved since Adam faced a featureless desert last year, perhaps thanks to a makeover by recently drafted environmental artist Laura Dilloway (“Person-who-speaks-without-speaking-with-light,” she tells me, showing her business card). However, there are other worries. The way Aliya herself moves feels ethereal. She “crossfades” through the scenery – a static illustration fading in and out as you move her around, or change the camera angle. This didn’t bother Adam, but for me it comes across as a halfway house of animation, clashing with the fully 3D environment to create an odd “floaty” character who never feels like a solid presence in the world around her. That said, I played Heaven’s Vault straight after seeing a demo of the exquisitely animated Banner Saga 3. Which is maybe a bit unfair.

Despite that phantom-like character animation, it’s a very promising piece of work and I’m saddened I won’t be able to decipher more of its ancient tongue until the game’s release. Right now, I only have some business cards to examine. I can’t wait to have a dictionary.

Heaven's Vault is aiming for a release some time this year