If you click on a link and make a purchase we may receive a small commission. Read our editorial policy.
Developer: TT Games
Publisher: Warner Bros.

Right, quick version: Lego DC Super-Villains is another franchised Lego game, and if you've played any they've made since around 2013, you already know everything you need to know about it. Open city (Gotham and Metropolis to start) mixed with missions, eighty billion characters, nine hundred trillion collectables, lots of silly cutscenes, tons of bugs, abysmal vehicle controls, and enough to do to keep you, your kids, anyone else's kids, busy for the rest of their lives. Done. Now I'll waffle.

Are you ready to think less of me than ever before? Yes, there's still lower to go. I knew pretty much nothing about the DC universe until the last decade's CW Arrowverse shows. Intolerable, I know. Never having been a comics kid, and never even being slightly attracted by the grimdark grumpiness of your fascists like Batmans and Green Arrows, nor the seemingly pointless godhood of Superman, they never crossed my path. 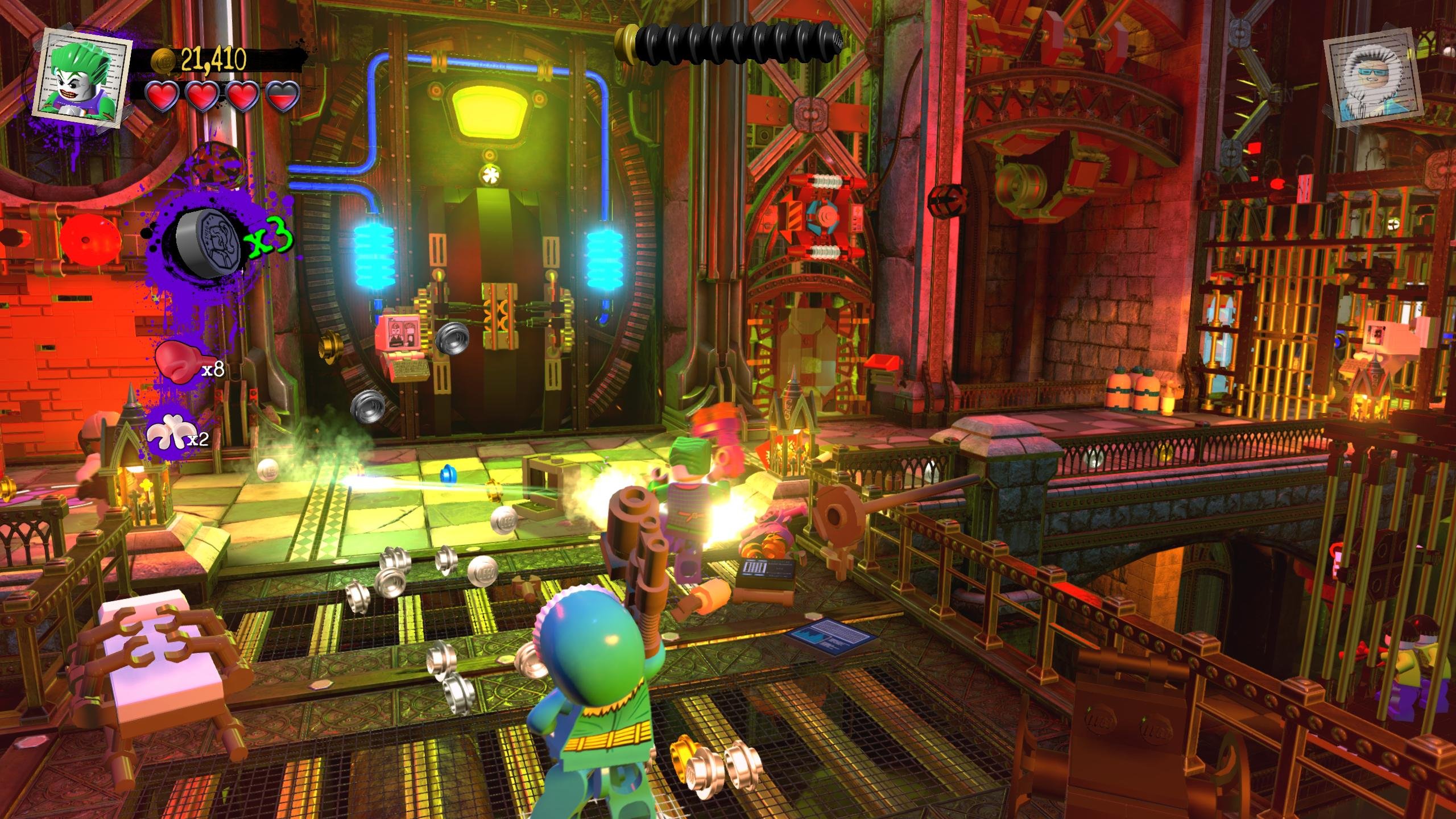 While like any sane child I adored, and aspired to be, Spider-Man, I didn't really know Marvel's universe either until my chum Kieron started writing the comics, and I thought I ought to have a read out of politeness. (He's quite good, you know, when he's not wittering on about bloody music.) So I'm late to catch up, and I'm that worst sort of scum to any comics fan - someone who only knows anything about anyone because of the Marvel Cinematic Universe. When it comes to DC, their films being quite so atrocious, I couldn't even tell you what happened in any of the recent Batman or Superman movies. And I watched Suicide Squad, so my chances of ever wanting to see anything else from the stable significantly lessened.

So here I am, knowing Flash, Arrow, the Legends, Supergirl, and looking forward to getting to know Batwoman, via the gloriously silly TV series. And Gotham! Forgive me. Find it in your heart. So why this autobiography at the start of yet another Lego game review? Well first, because good grief, this is by my count the TWENTY-FIFTH licensed Lego game in TT's thirteen year odyssey, and I'm really running out of ways to say, "Yup, they made another one." And second because it'll let you know that I'm not approaching this one with quite the same verve as I perhaps did 2013's first Lego Marvel Super Heroes. There it was like getting to play as old friends. Here it's like playing, "Oh, wait, yeah, wasn't he a baddie in that one episode of The Flash?" 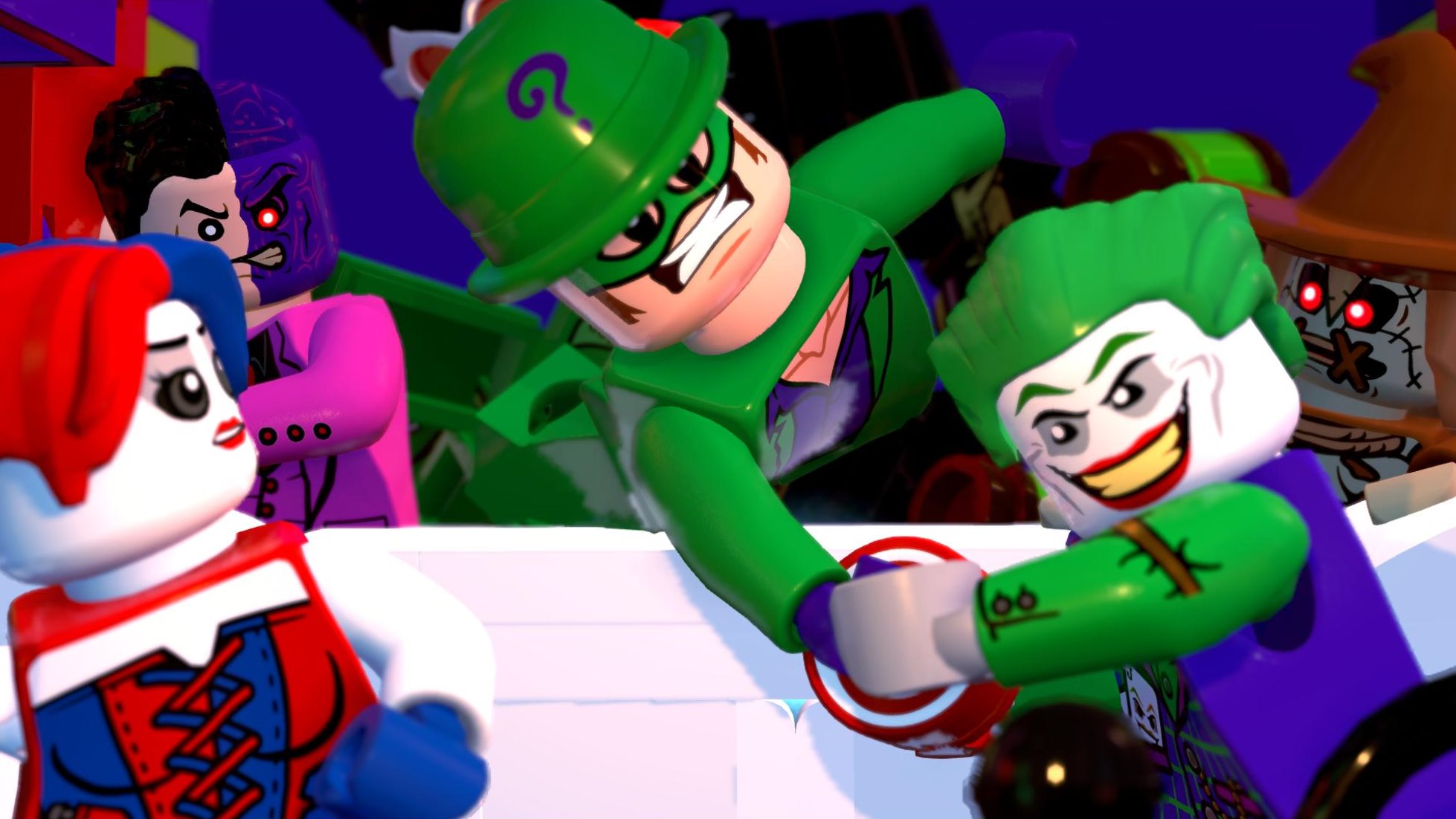 I mean, I've never heard of Cheetah, who shows up as one of very many playable characters in the first level. Clearly I know Joker, Harley Quinn, Lex Luthor - I'm not bonkers. But it took me a moment to work out who Solomon Grundy was supposed to be - thank you last season of Gotham. But despite all this, the chances are I'm the only one who's familiar with Lizaria! Because she's the character the game let me create at the start, in a surprisingly malleable, and surprisingly dreadful, character creator.

Gosh it's bad. Choosing a face involves going through four different sub-menus, with pages inside pages inside pages dedicated to hands, legs, personalities, the colours of the grapples they fire, the nature of the explosion when they ground stomp. I made a fantastic lizard lady, complete with croc-head and dino-tail, all her effects in varying shades of green, but goodness me it's a garbled mess to get there. Plus ça change for TT, you might say, these Lego games always filled with utterly clunky designs that somehow fit inside really entertaining games. Lizaria helped Joker with his big escape from jail! 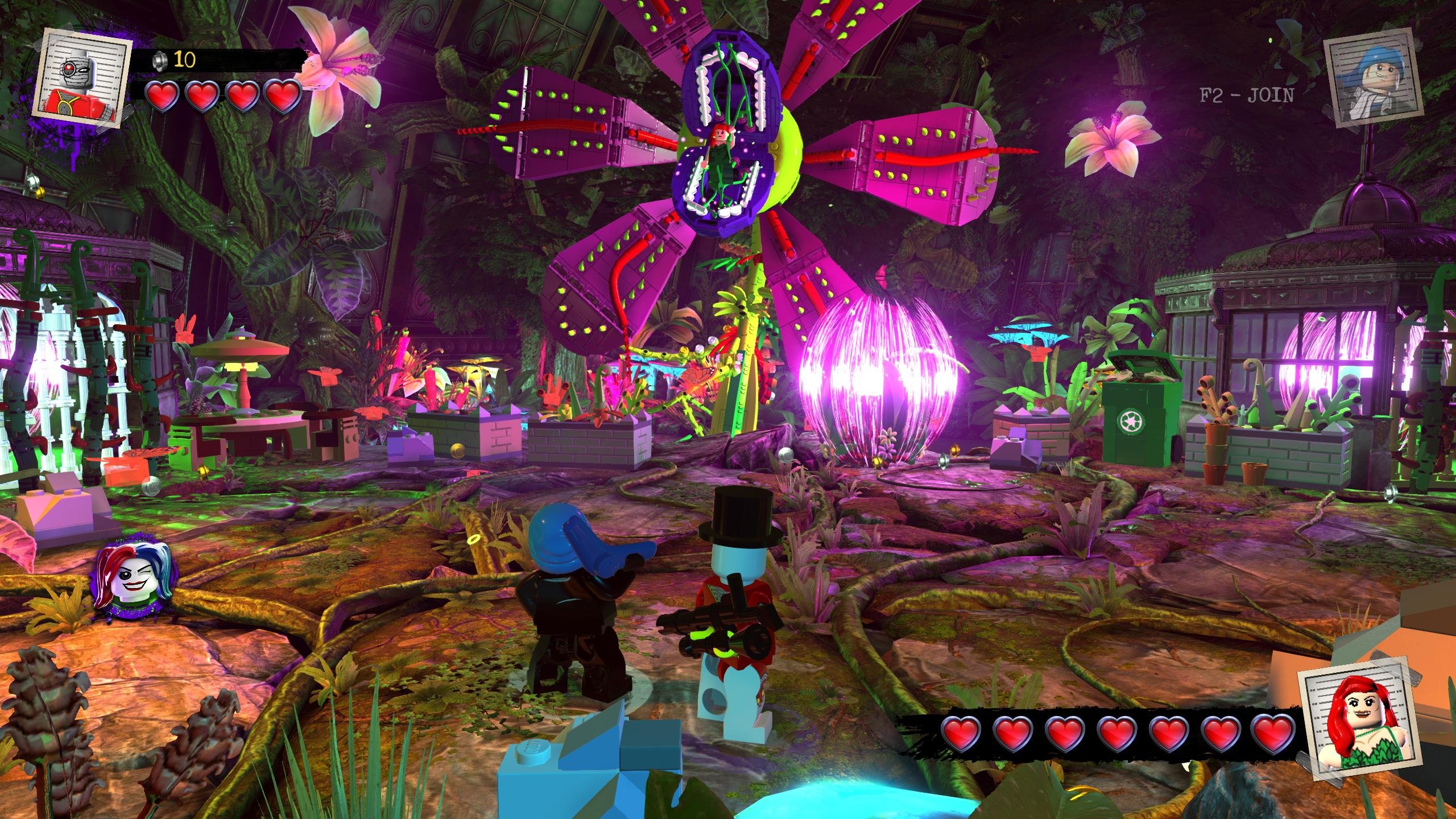 You may well be wondering, how does the game deal with the perennial issue of playing as the bad guys in video games? The answer is, I'm astonished to tell you, really well! It just lets you be the bad guys, beating the goodies!

I was certain it was going to take the more usual path of having there be a greater bad that the baddies side with the goodies against - that's the weary old excuse most games use, if they don't take the awful Overlord games' even more mealy-mouthed approach of having the villains just be nice to people while grumbling.

The first sign was the early disappearance of the entire Justice League, swapped with their not-quite-doppelgangers from Earth 3. (I'm so down with DC that I know Earth 3 is the horrid one.) Ah, see, they've removed Batman, Superman, Flash, Aquaman, etc from the equation straight away, and given us evil versions to fight - bleh. Except, not quite! Because in the next mission you're successfully defeating Nightwing and Batgirl! Sure, they're not exactly big league names, but the point is, it's villains succeeding in their villainy - at least in the short-term. Yes, it does eventually steer toward the regular villains having to work together to defeat the Earth 3 villains, but so far without feeling like a cop-out. I'm not likely to live long enough to play to the end to see if they resolve it all. So, anyway, good for them!

That said, the story makes not a bloody lick of sense. At one point I was breaking into Star Labs (in Metropolis for some reason) to find a way for Reverse Flash to transport them into Earth 3, and seemingly successfully sent him off into the speed force. Then there was something else in Gotham for a bit. The next time I saw Reverse Flash and gang I was, um, breaking them out of Rykers again. Huh. 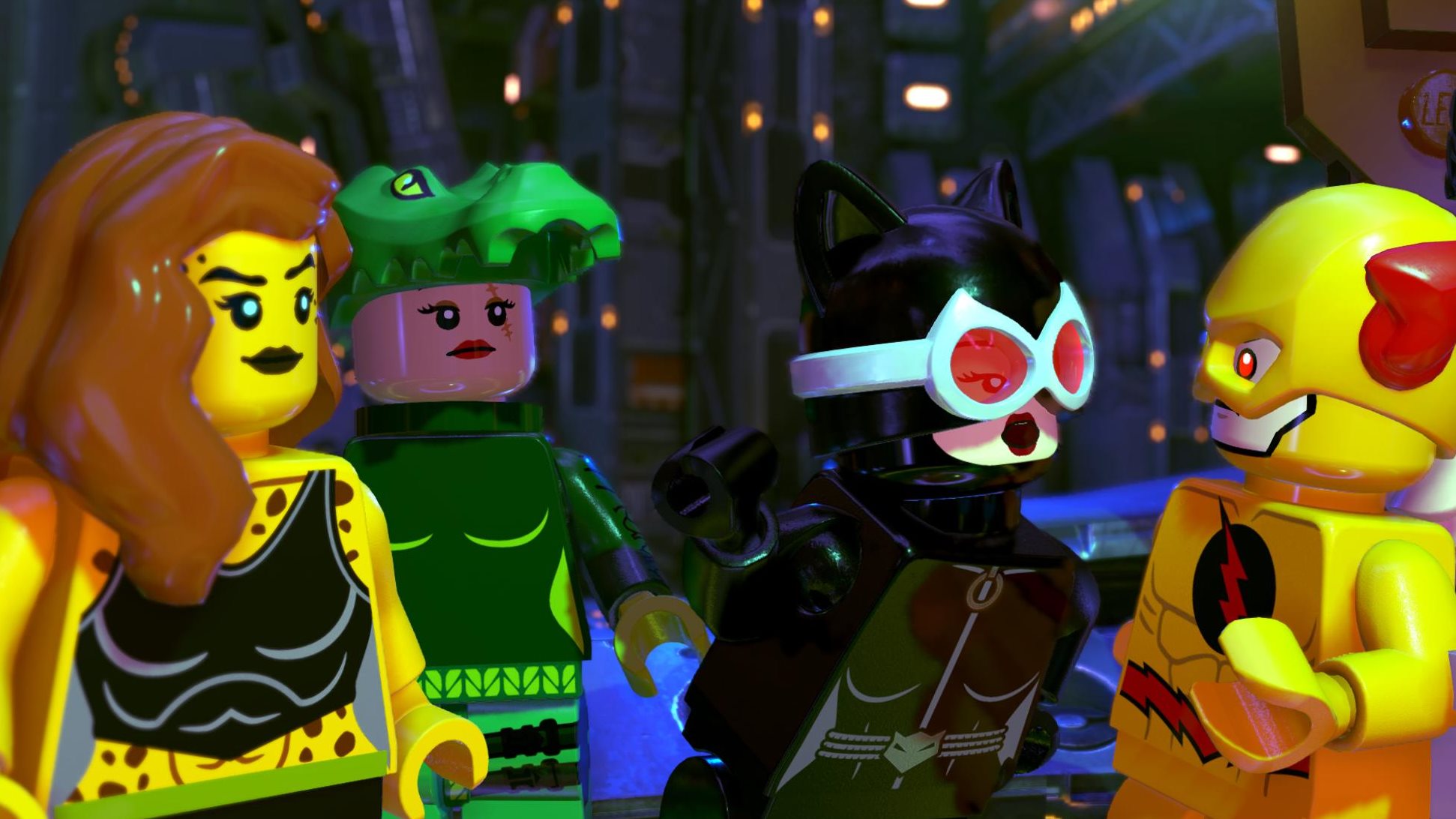 Honestly, I find writing about these games increasingly exhausting, and playing them just as fun as ever. There was a point, around the Lego Indy period, where it became far too frustrating that the things that were wrong with all the games (lack of camera controls, appalling vehicles, poor direction in some puzzles) were clearly never going to be addressed.

Then a sort of resigned acceptance kicked in, and yeah, all those things are wrong with this game too (albeit with a sort of hint system, that won't bloody shut up about telling you it exists). But we already knew they would be. TT clearly know they're going to bathe in diamonds and rubies with every release anyway so clearly can't be arsed to fix them, and sod it all, we're all having fun playing them anyway.

But I do want to take the opportunity to try to nail down another thing about these games, that's been wrong with all of them since Lego Star Wars, that's now really getting stuck in my craw: the weird silences. I struggle to think of a better word, since there's always some sort of orchestral music irrelevantly rumbling away in the background, but I mean the floaty ambient nothingness that haunts every level. Those bits where the camera drifts about, the characters idle, and then finally something happens, or it jarringly cuts to another scene with another set of characters seemingly trapped in the same ethereal limbo.

No scene seems to end, but rather awkwardly meander into uncomfortable silence. They're like bad SNL sketches (most SNL sketches) where they never figured out a punchline, and the audience sort of murmurs in confusion and then, realising it's done, claps. Except without the clapping. It's weird! I want it to stop! 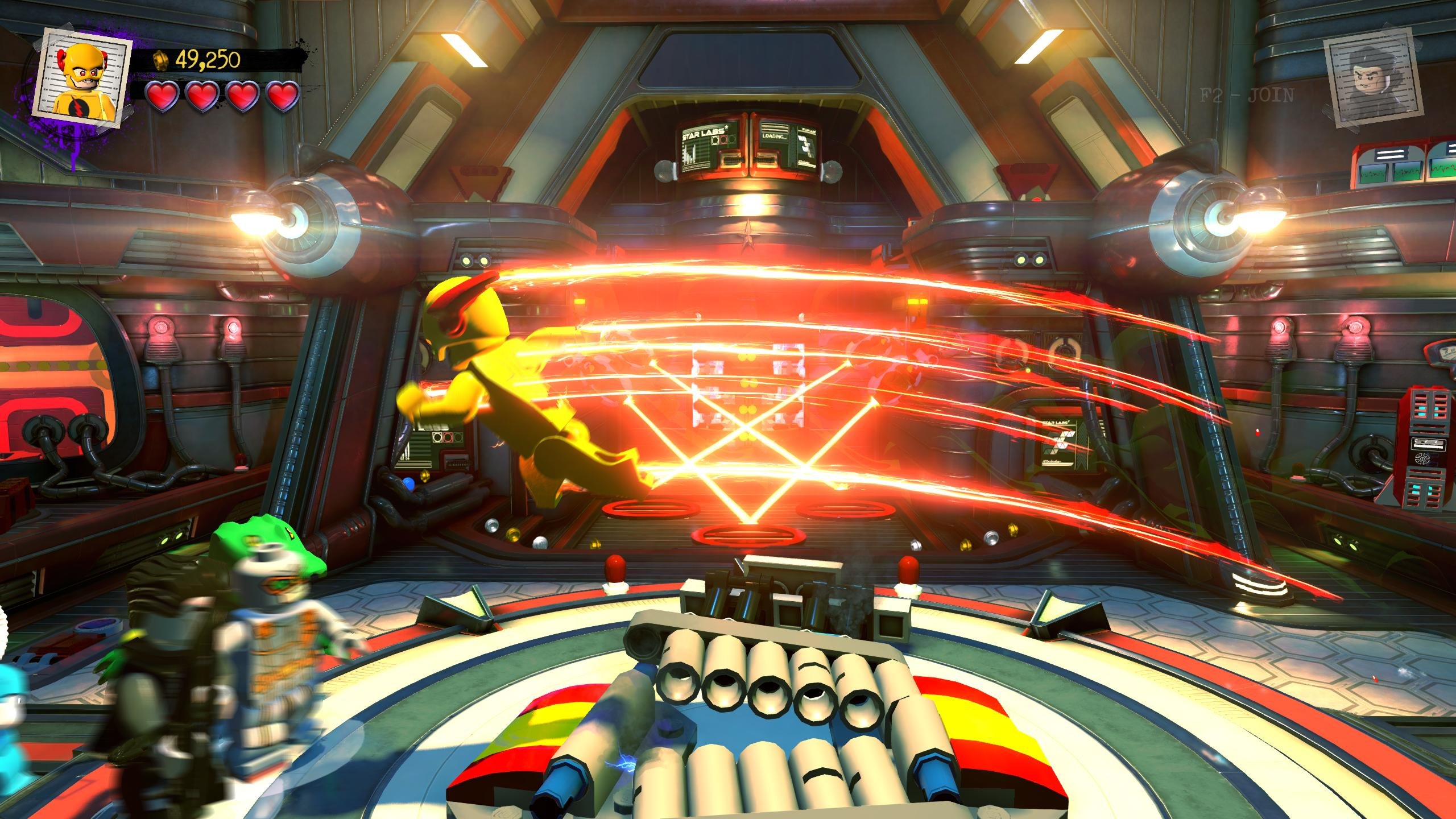 Much more positive in this outing is the voice acting, and the character choices. They've just gone hog wild with where they've picked the incarnation of each villain from. So while Riddler is rather like his Gotham incarnation, Joker has been drawn and voiced like a classic '60s Cesar Romero, and voiced by none other than Mark Hamill! Splendid! Penguin, oddly, is British, and once more an old monocled man. Quite how Commissioner Gordon gets a decent Liam Neeson impersonation I'm not sure - the closest I can see is Neeson playing Ducard in the grimly overrated Batman Begins - but great! And parents will be equal parts relieved and disappointed to learn they've opted for the Harley Quinn of the earlier Lego DC games, rather than attempting to invoke any Margot Robbie-ness to the role. (Although it's again worth noting I know absolutely nothing about any of the televised cartoon versions of DC, so they could be lifting from there too.)

And there are some good names in here. Clancy Brown as Lex Luthor, for instance. Grodd is played by David Sobolov, who does his voice for all the CW shows. Gina Torres (Firefly) reprises her role as Superwoman. Grey Griffin, who has been Catwoman a squillion times, including in the Arkham and Injustice games, purrs here too. Oh, and after thinking, "Wow, the guy doing Malcolm Merlin does a really good John Barrowman impression," I was even more surprised to discover it's actually John Barrowman! Batman is Kevin Conroy, which will please fans of every TV cartoon. Oh, and brilliantly, Mark Hamill also voices Trickster, which I think we can all agree was his greatest ever acting role when he appeared in The Flash. I could keep doing this forever - hell, somehow they even find room to get Nolan North and Jennifer Hale in - but I should probably stop. You can go through the cast list and be astonished for yourself. (The incredible Jeffrey Combs is Scarecrow! Sorry! I'll stop!) 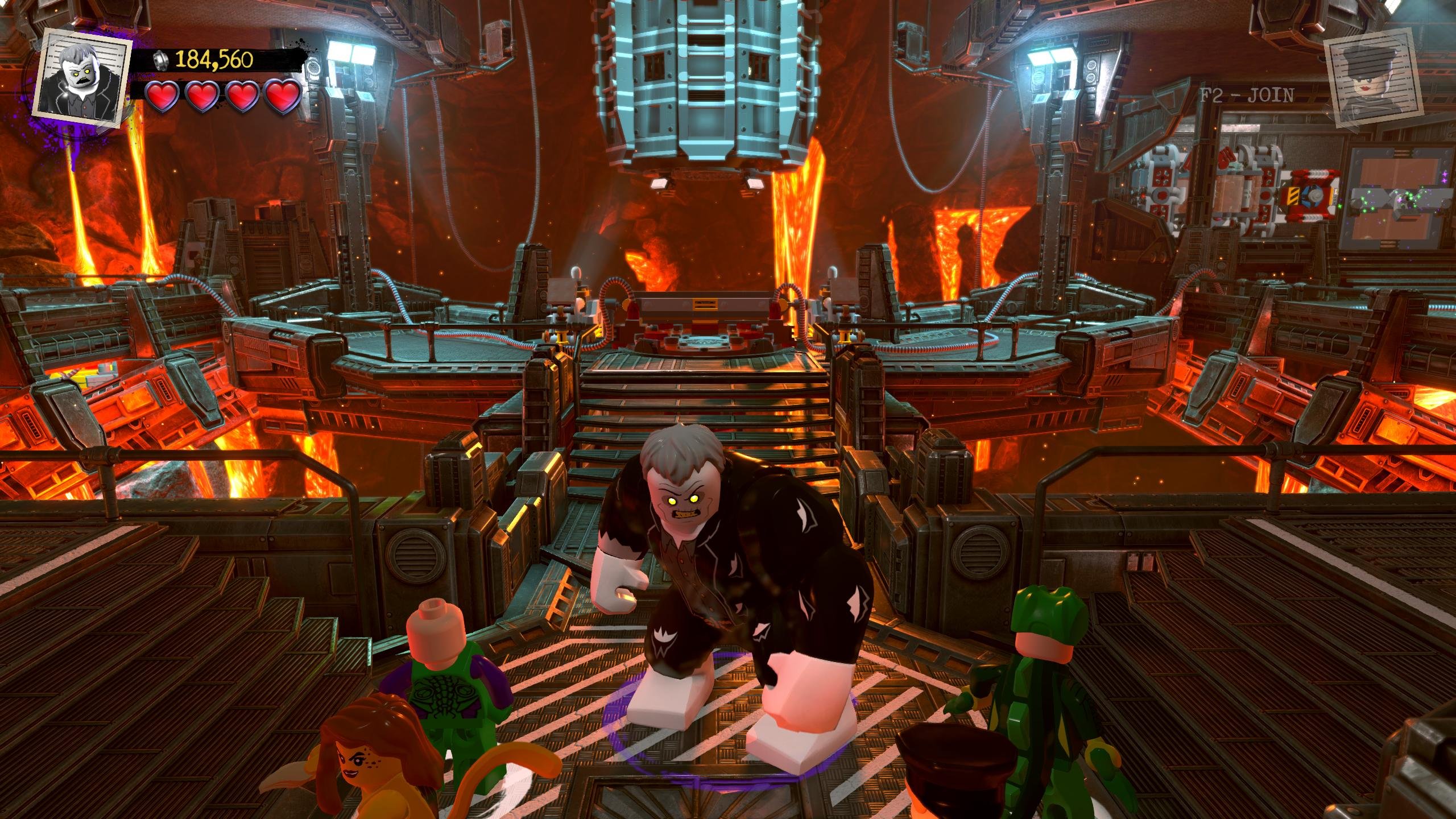 Much less positive is that, as we've sadly come to expect of these games, it's also buggy as hell. I managed to get a necessary vehicle stuck up a tree (!), with no way to recover other than quitting the game and starting the area over. Another time mid-mission a scripted event just failed to initiate, leaving one character trapped in a lift with no way out, and no way for the other to rescue. Again, despite the regularity of such bugs, they've still not added an option to respawn a character in a scene, nor do they even have a menu option to return to the last checkpoint - instead I had to quit and restart the mission from the beginning. Awful. The worst part being, of course, is that you're never sure if the game's crapped up again, or if it's another badly flagged puzzle. 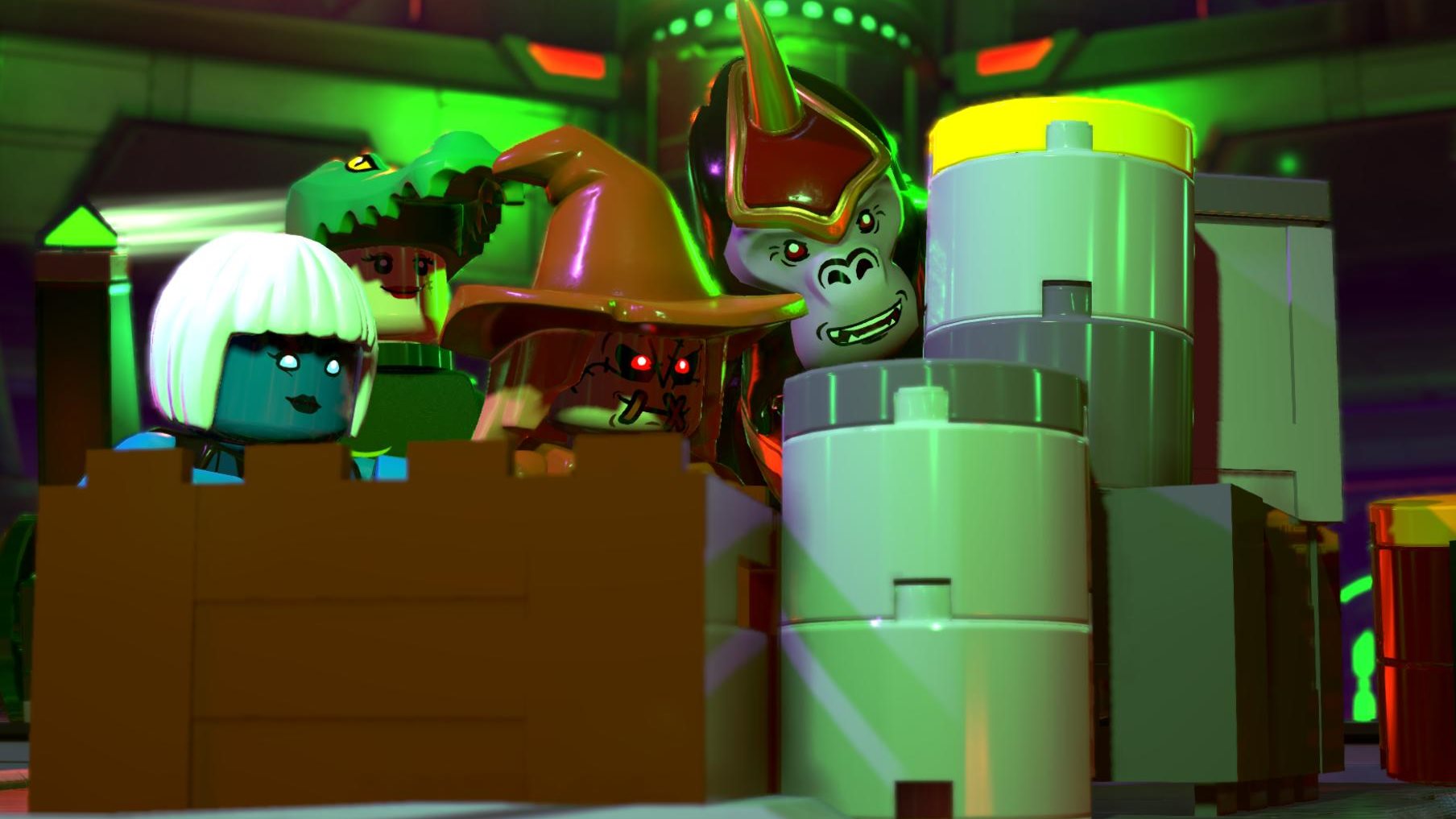 There's so much of it, they've put so much love into the bits they were interested in putting so much love into, and I realised just now while picking through the predictably abysmal menus (trying to find where they'd buried Free Play this time) that it was going to be revealing Earth 3's version of the world later too. It's one of their good ones, with all the usual caveats about how they seemingly just aren't ever going to fix everything that's always wrong with them.

It's also really fascinating to play with a nearly four-year-old, who just can't get his head around playing as the baddies, and incessantly asking, "So is HE a goodie?", "But is SHE a goodie?!" with every introduced character, not quite able to grasp the complexity, but then suddenly shouting encouragement to help break everyone out of prison. I think I might have broken him.