Occasionally while surfing the interwebs, you'll stumble upon a Cool Thing from a few years back that you absolutely missed in the moment, but is both fascinating and painfully applicable now. I failed to notice that this post I love is from 2014, so while some of the examples are slightly dated, playing the associated game is still a frustrating experiment in awareness.

The creator of this thought experiment originally posted this as a Patreon-supported bit of content on a site called Make Me A Sandwich, which is dedicated to exploring how NOT to sell video games to women. So before we go any further, please go support the creator if this is up your alley. Also, in reaching out to ask permission for covering this piece, the creator let me know their most current work is this tabletop role-playing game, which focuses not only on battles against evil but also managing emotional costs and PSTD between missions which is crazy brilliant -- so maybe consider grabbing that too.

Thank you, Anna Kreider, for letting us cover what we're about to get into. (Also worth noting that Make Me A Sandwich is now a Patreon under Anna's name because, predictably, the site had to shut down in 2016 due to harassment. Long, forever sigh.)

From Anna's original post about the origin of today's game:

This is something that has been on my mind a lot lately. Just last night I was bitching to my husband about how unbelievably DONE I am with stories about MANLY MEN PUNCHING THINGS AND BEING MANLY BECAUSE THEY’RE MEN.[1] So I decided to write a post about how unbelievably unoriginal most games protagonists are, but I didn’t know the best way to do it. I hacked away at it for a while and wound up with an outline that would have been 3000 words.

And then I thought – bingo card! Let’s make an amusing feminist meme work for me! A picture is worth a thousand words and all that. …well, okay. Ten pictures is worth 3000 words. It’s the exchange rate. 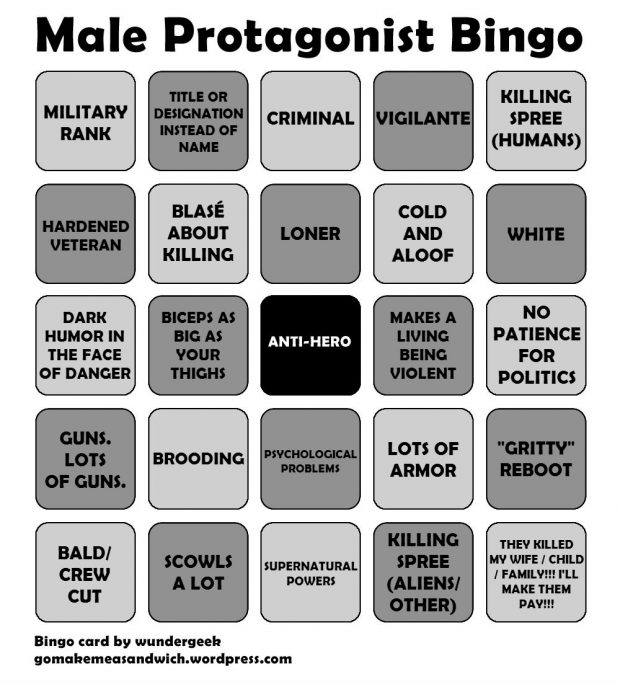 Woof. There's a lot here. Anna begins to unpack some of the biggest characters in gaming. Snake: passes the test. 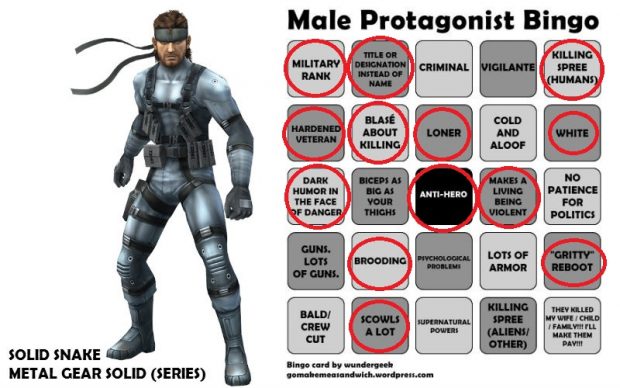 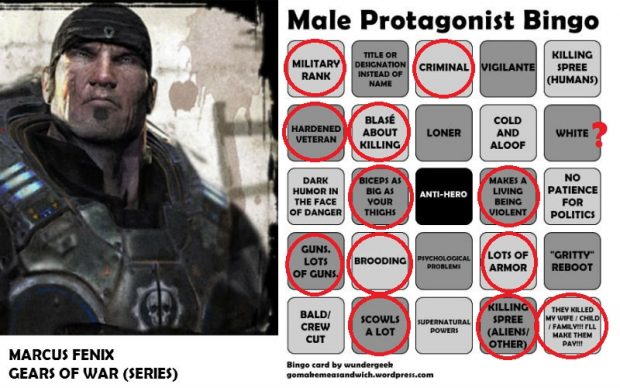 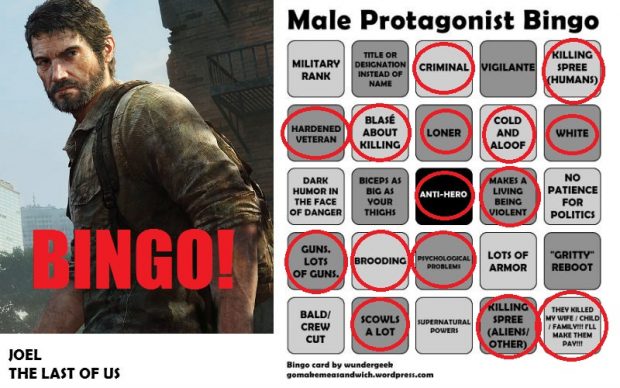 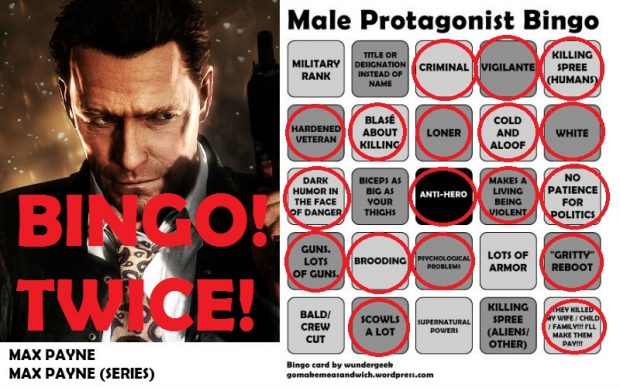 Again, this post went up in 2014, so I'd like to think there's been progress since then. I'm not gonna do Anna's level of art but let me try out a few characters from games I've been playing or replaying:

Prey's Morgan: there's a lot of question marks depending on how you play but your history is established and you'll notice I did the appropriate thing with the square for psychological problems. 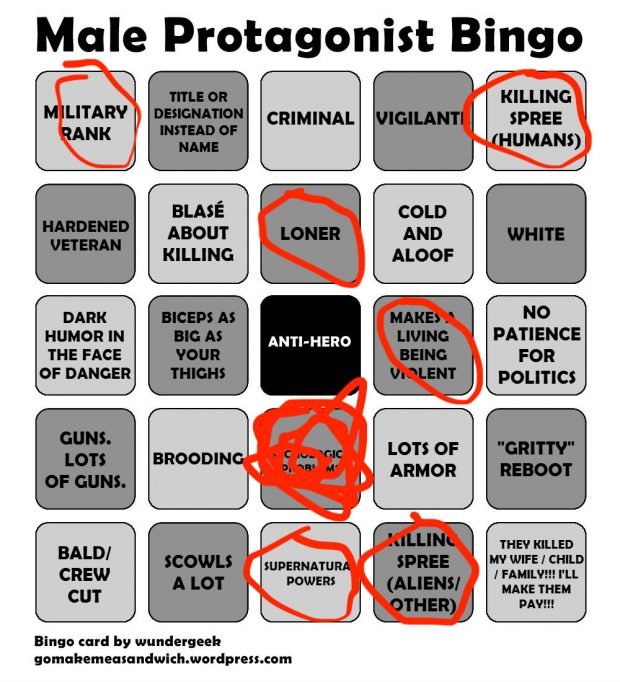 LA Noire's Cole Phelps: PHELPS GET IN MY OFFICE THE MAYOR KNOWS YOU'RE NEARLY A DOUBLE BINGO, BOYO 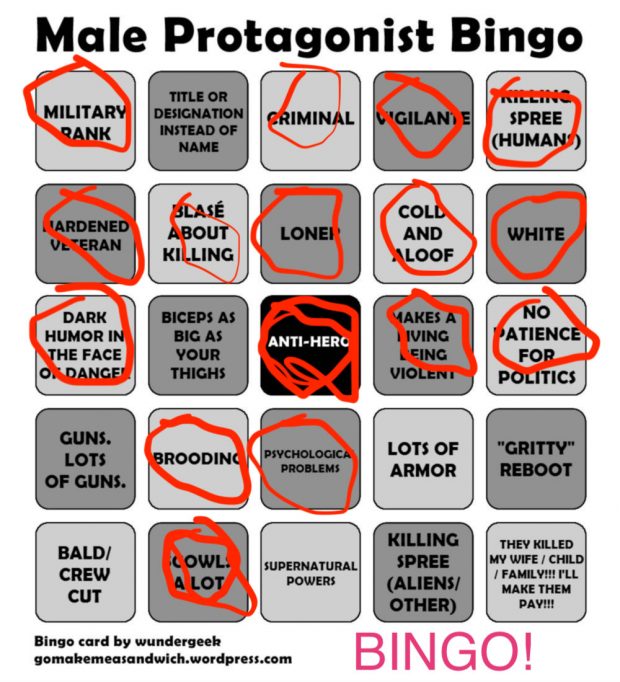 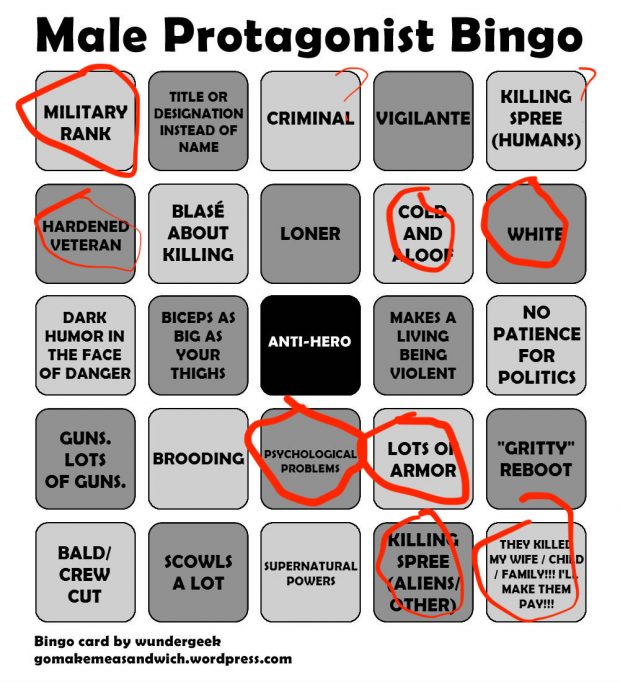 Unnamed Protagonist from Blackwater: The Video Game (better with Kinect) on the Xbox 360: 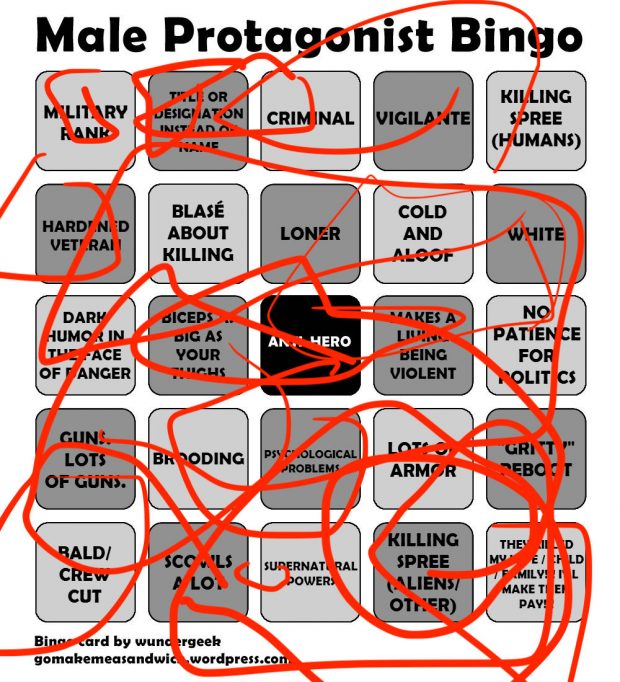 So have some fun in the comments and submit your best and worst or most neutral moral alignments.

Still can't believe there's no Bingo for Marcus Fenix. I'm now doubly interested in all of this? Again, this isn't necessarily a measure that a protagonist is "bad" but it is a pretty excellent measure of the industry being boring as hell and also, of course, ignoring the stories of half the population in an effort to churn out some grey nonsense.