Desktop PCs can be huge, clunky things that take up buckets of room sometimes, but what if I told you that you can still have a super powerful PC without having to put up with an enormous PC tower? Enter PC case maker Lian Li's new motorised gaming desks. Dubbed the brilliantly catchy DK-04F and DK-05F, you can now gaze at the innards of your machine right underneath your keyboard. Who needs a gaming bed when you've got one of these beauties?

These aren't the first gaming desks Lian Li have made, all told, but this pair of literal desktops are the first to come with a switchable top glass panel that can either let you see inside its RGB, water-cooled components or turn completely opaque at the touch of a button. Measuring 8mm thick, Lian Li say it can support up to 80kg on top of it, which should be perfect for a couple of monitors and anything else you might want to stick on there. Each desk also gives users more control over the system fans than previous models, too, which will no doubt come in handy for those who opt for the fancier DK-05F that can hold two systems inside of it instead of just one.

Yep, the DK-05F can host two separate PCs inside its cavernous, 1400mm long desk belly, which could come in handy if you're a streamer who already runs two PCs anyway. The 1000mm long DK-04F, meanwhile, only holds a single system. However, both come with removable motherboard trays that are capable of holding mini-ITX systems all the way up to E-ATX monsters, as well as removable storage bays so you can add more SSDs or HDDs without issue. There's 185mm of clearance for your graphics card and CPU cooler, too, which Lian Li says will allow custom water cooling enthusiasts to build custom loops "without limits". 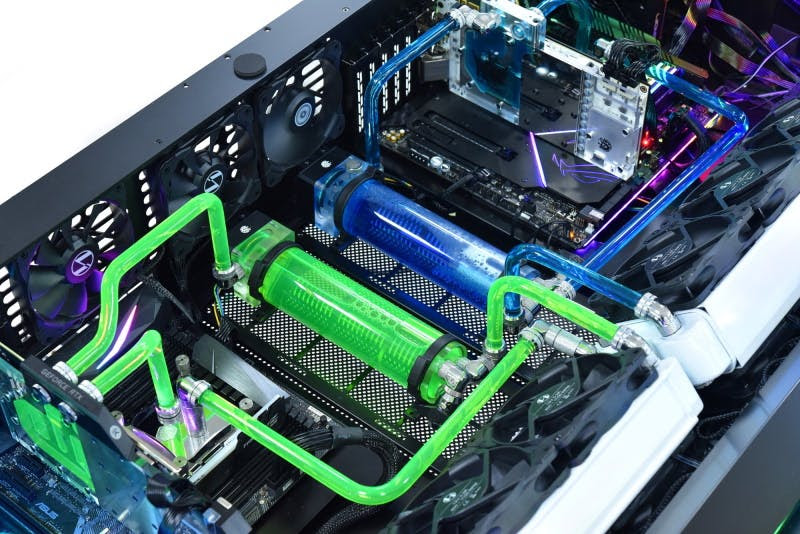 The desks themselves are built from high-end aluminium, according to Lian Li, and the DK-04F and DK-05F both come with four height presets. These can be adjusted anywhere between 689mm off the ground up to 1175mm, which Lian Li says should be a "comfortable standing position, even for a tall person".

The real question, though, is how much do these monstrous things cost? The answer is: not as much as you might think! Sure, you could buy an entire PC complete with actual components for this kind of money, but $1500 for the single-system DK-04F and $1999 for the dual DK-05F is actually a lot less than I was expecting. After all, even cheap motorised standing desks will set you back at least half that amount these days, while posh ones cost that kind of money anyway. So if you're stuck working at home and feel like a standing desk could do you good, one of these jobs could be just the trick. They're available now, too. Here it is in action: