I'm having a significantly better time than I'd expected with Solid crew spin-off Metal Gear Survive, but something about it does rub me up the wrong way - and I'm not talking about whether or not it stuck a dagger in Kojima's kidney or how heavily it borrows from other survival games. Like Metal Gear Solid V before, microtransactions have crept into Survive, and though they're not at all necessary to either singleplayer or co-op in the open-world base-building survival sandbox, they do push against the limits of fairness. $10 to buy a second character slot, for instance, or $2 for a one-day temporary boost to the points required to level your guy up. And this is in a game that costs $40/£35 upfront.

This is all thoroughly (and depressingly) modern in-app purchase fare, of course, but maybe it's causing more public ructions than usual here because it only adds to the sense that a Metal Gear ship bereft of its traditional captain is one doomed to turn wildly off-course. Me, I like the game well enough, but my central concern is how crudely this stuff has been implemented. There isn't a central store to which you go to pick and choose paid goodies from, but rather SV Coins, as the paid currency, just crop up all over the interface in inconsistent and sometimes unexpected ways. 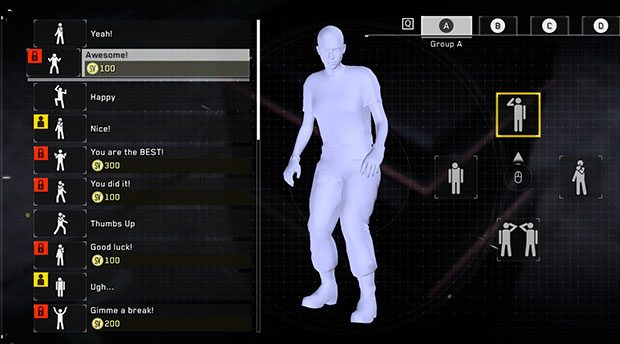 Clearly there's something deliberate there, in terms of the game showing you what you could have while you're looking glumly at what you do have. However, it also reflects the fact that MG Survive's crafting, inventory and building menus are even more of a disaster zone than the displaced wreckage of MGSV's Mother Base, which acts as central backdrop to Survive's zomb-o-stealth shenanigans.

It divides craftable items between 'gear' and 'gadget' terminals with arbitrary abandon, for instance, while you need to go to a separate terminal still if you want to browse what resources you have in storage at your base, while the activation key for usables wildly jumps between R, T, Enter, Space and G.
I've spent far more time rummaging miserably through menus than I have sneaking up on zombies, and this extends even to trying to find all the microtransaction options for this piece. They're all over the place. Oh, and yeah, they are Not Good.

The headline facepalm is MG Survive's stinky decision to make extra save slots a paid purchase. Now, most likely you'll put dozens of hours into one character and this won't be an issue for most of us, but for those with an abundance of free time and/or a determination to experience everything, a different character with different skill choices and appearance (though everything except character gender can be modified in game) is the only option. Trouble is, the slot costs 1000 SV coins.

Further trouble is - and this sort of tactic really makes me want to kick executives into the sun - that you can't simply buy 1000 SV coins as a package. You can buy 1150 SV coins for $9.99/£7.99, or you can buy two lots of 550 SV Coins for $4.99/£3.99, in either case ending up with an effectively useless lump of 100-150 Coins. The only thing you can afford with that change is one of the lower-tier character emotes, but these are meaningless if you're playing solo. So, you'll need to buy even more coins if you want to spend the leftovers on anything else. Alternatively, you can buy 100 SV Coins for $0.99/£0.79 ten times, but that way you end up with 150 less coins than you would for the $9.99/1150 SV pack. Wicked - and all-too-common in microtransaction land.

MG Survive will also sell you extra storage slots for crafted weapons, in this case for 550 SV coins a pop (so, again, that 550 SV coins for $5 bundle is a dick move). I haven't needed this in my few hours with the game so far, but I can well imagine that, later on, when I've built and upgraded a bunch of weapons I've grown fond of, I'm not going to want to dismantle one to make room for a new one.

The other major point of gouging is Boosts. MG Survive doesn't quite let you pay to directly improve your character's abilities, but for the low, low price of 200 SV coins for a day or 2400 SV coins for 60 days (and of course the next bundle up from 1150 SV Coins is 3500 for $30/£24), you can buy a potion that increases how much Kuban Energy, the in-game crafting and levelling-up resource, you collect from slain enemies and crystal deposits. I.e. pay out, and you'll level up much faster. Boosts also augment the production of certain buildings, thus reducing the amount of schlepp needed to replenish food and water, as well as the effectiveness of your NPC squads when you send them out on missions.

It is all more than a little icky, isn't it? In my experience so far none of these purchases have been remotely necessary, and nor have they for our reviewer Matt, but clearly they are there as a temptation for the time-starved, the power-hungry and the completionist. A low blow to a game that has otherwise turned out a fair bit better than we might have reasonably expected.

I should note, by the way, that MG Survive does give every players 30 SV Coins a day, presuming they log into it that day. So, after four days you could afford an emote, after one week you could afford a single-day booster pack and after a minuscule 34 days of logging in every day, you'll get your dang extra save slot. 2018, everybody.