There was a time when only a privileged few were given the opportunity to create art. While the less fortunate were out tilling the fields, court-appointed portraitists were funded by royal patrons to immortalise their subject’s likeness on canvas. While us regular folk gnawed on potato peels, married our cousins and died of a cough at the ripe old age of 28, an enlightened few were permitted to daub landscapes in expensive oil paints, to write beautiful plays and sonnets, and to carve men with tight little asses out of giant blocks of marble.

We now live at a point in history when the average person has access to the most powerful creative tools known to humanity, requiring only the time and inclination to give form to their ideas and personal beliefs. To render in virtuality that which once existed only in their minds, and to share their creations with the rest of the world in a single click. It is humbling, this divine power that has fallen into our laps, this untrammelled ability to depict not just hot men throwing frisbees, but entire universes, and not in marble but in code. 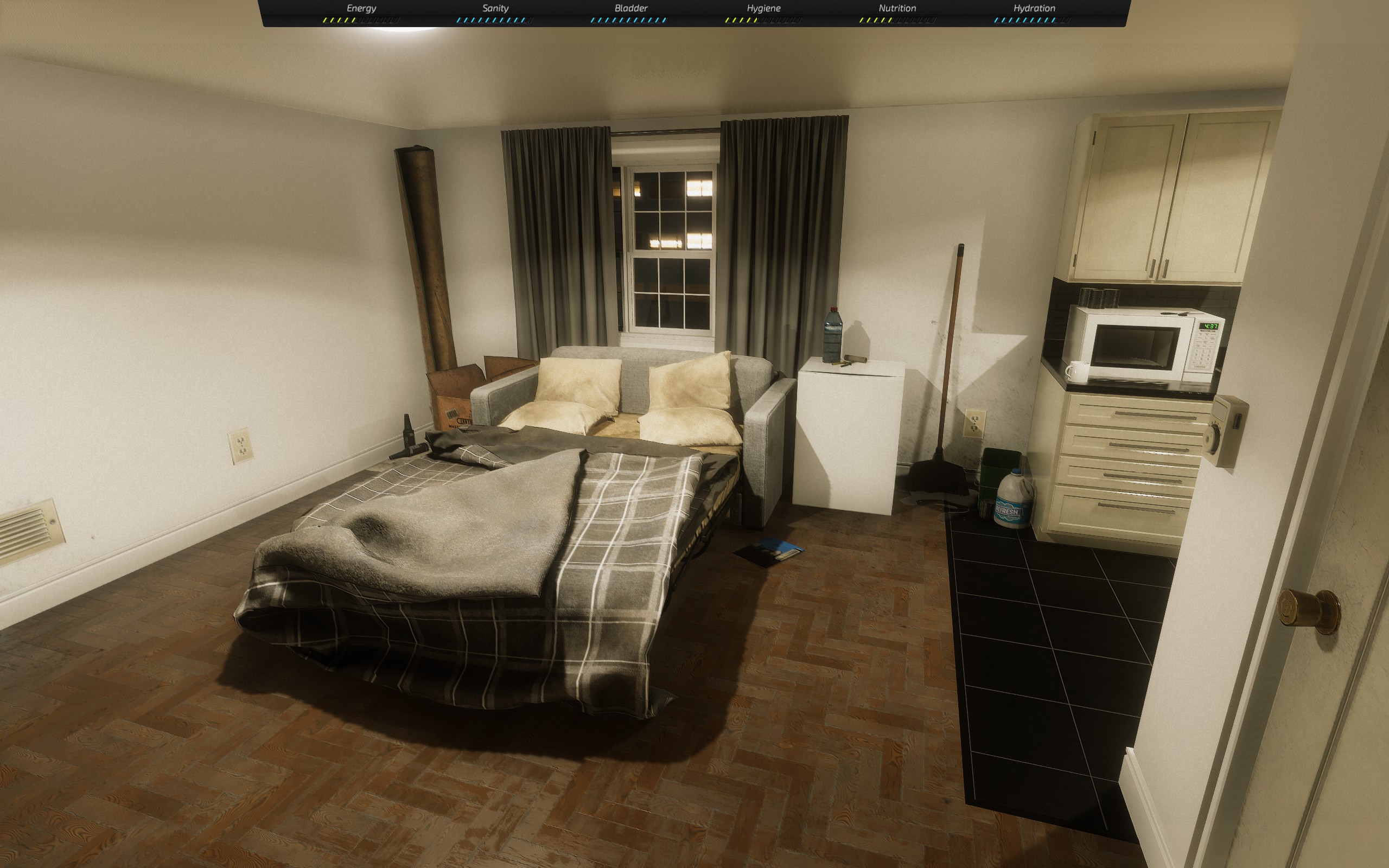 Here’s what one guy did with that power. Metro Sim Hustle is a train driving simulator in which you can sell cocaine and booze to various NPCs, so that you can earn enough money to rent one of three nicer flats. If you press the V key at any time you can pee on stuff, Postal-style, reducing your “bladder” need but also dragging down your hygiene rating, which can be recovered by jumping in a shower.

As the theme of the game – besides driving trains – is vaguely to do with climbing the property ladder, it’s only natural that you start out sleeping on a stained mattress in an abandoned building with nothing but a phone, a wall to pee against and a freelance gig as a train driver to your name. Metro Sim Hustle presents a reality in which commercial train drivers are mostly homeless drug dealers who were inexplicably handed the keys to a train one day. In the real world, just one in five train drivers start out this way. 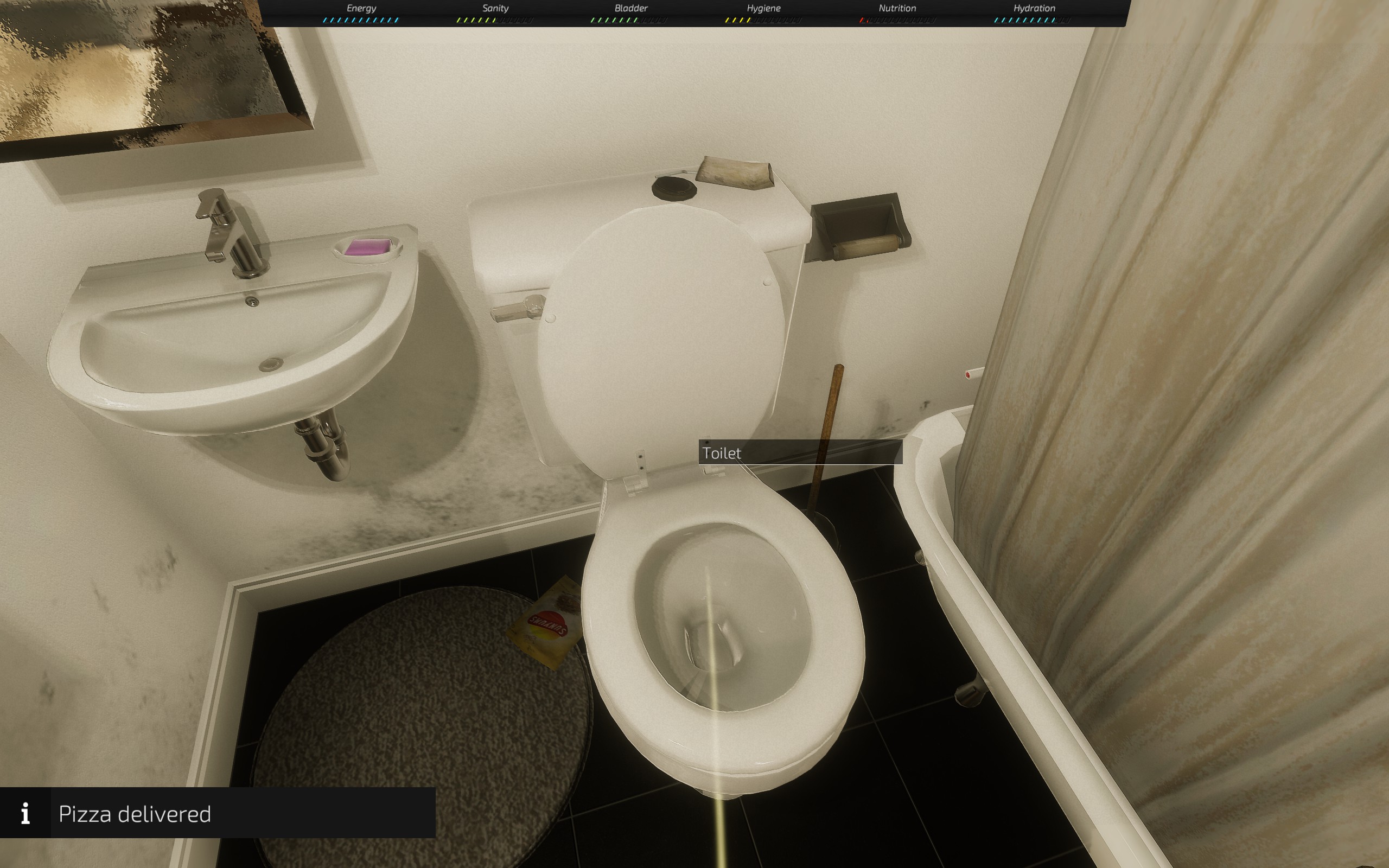 You’ve got a set of Sims-like needs to balance, which is par for the course for this kind of thing. Metro Sim Hustle belongs to that curious sub-genre of simulator that’s obsessed with micro-managing aspects of staying alive that really should be automated. For instance, a sanity meter will gradually deplete if you don’t take any drugs or talk to other people. Counter-intuitively, you can become incredibly sane in a short space of time by rapidly clicking on somebody to talk to them about their interests hundreds of times per second, like some kind of a social hummingbird.

You need to eat too, which is achieved by ordering a pizza on your phone if you’re at home, eating any leftover crisps, energy bars and sausages you find on the train at the end of your shift, or by purchasing one of about a dozen varieties of sushi. The developer, I suspect, really likes sushi, and has taken great care and attention to include an exhaustive menu of his favourite sashimi and nigiri in the game’s sushi bar. 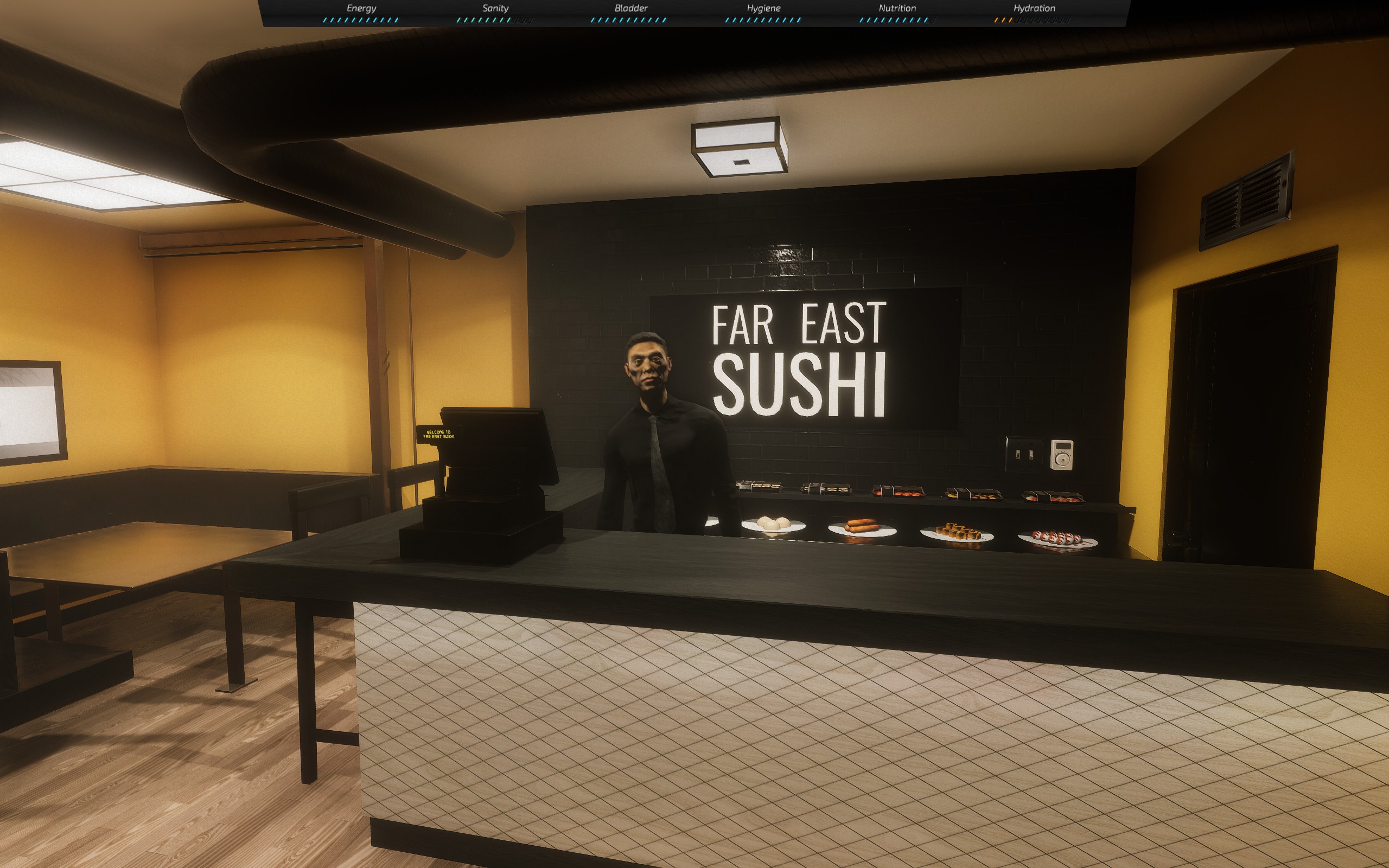 Far East Sushi is one of about half a dozen buildings that exist in the game’s hauntingly abandoned city block, the remainder of which gives us just as great an insight into the psychology of this world’s architect. There’s a deeply symbolic travel agency, permanently locked and out-of-bounds to the player. There’s a disappointing strip club, in which one solitary lady is cursed to repeat the same sexy dance animation for all eternity. 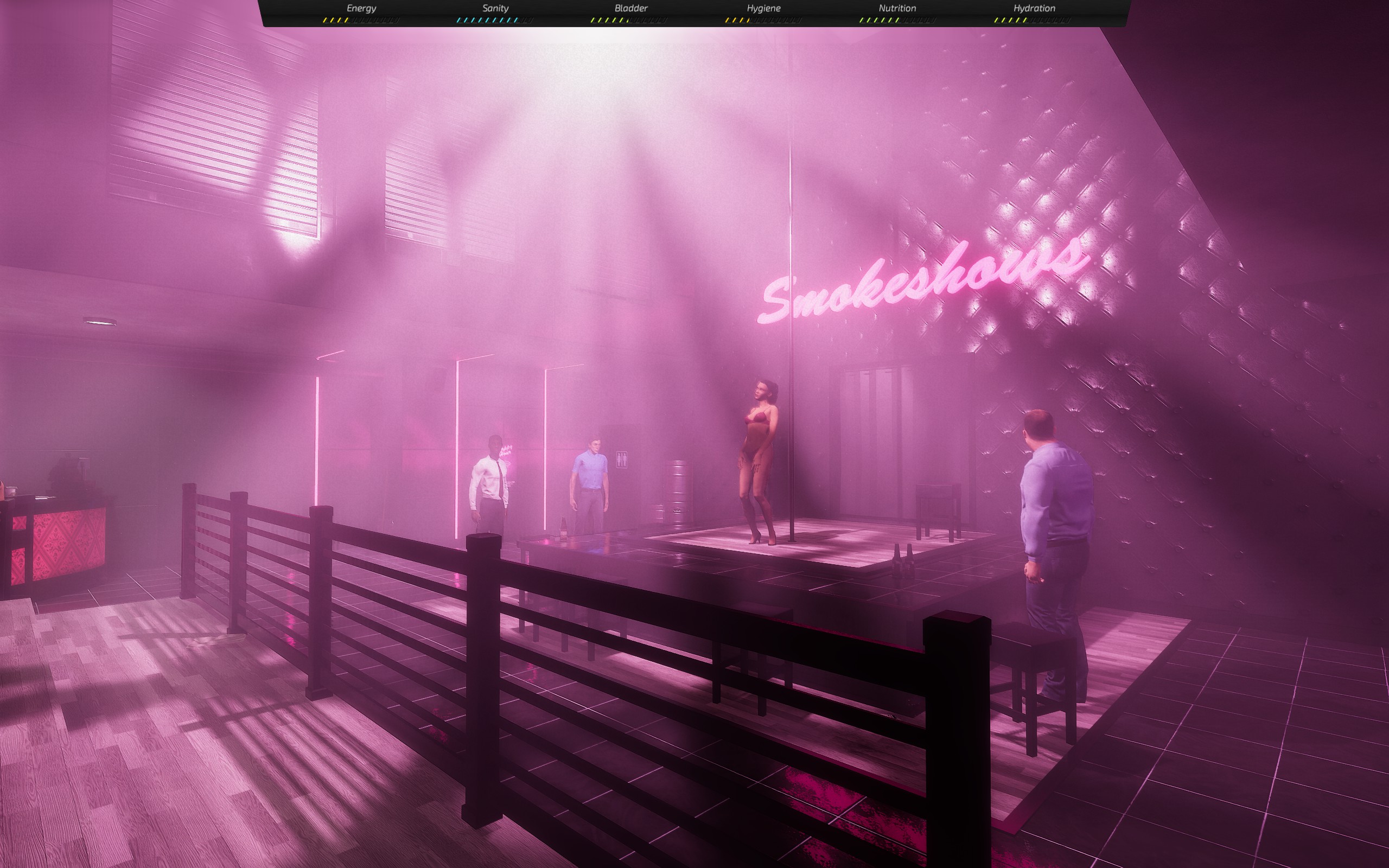 And there’s a clinic, where you’ll wake up if you neglect your mental health needs by going too long without speaking to anybody, presumably after an emergency injection of sanity. An implied psychotic break isn’t even the weirdest feature in a game that’s supposed to be about driving trains. That accolade goes to the trading system metagame – the titular hustle, I guess – which has certain NPCs willing to pay above the odds for their favourite items, which they loudly declare in dialogue.

The guy who’ll buy your cocaine, for example, does not talk about anything other than his undying love of cocaine. I cheesed the system by spending a pointless half hour ferrying as much red wine as I could haul between the off licence and a thirsty woman at the nightclub, making a cool $10 profit on every bottle. This, I believe, is how an economy works. 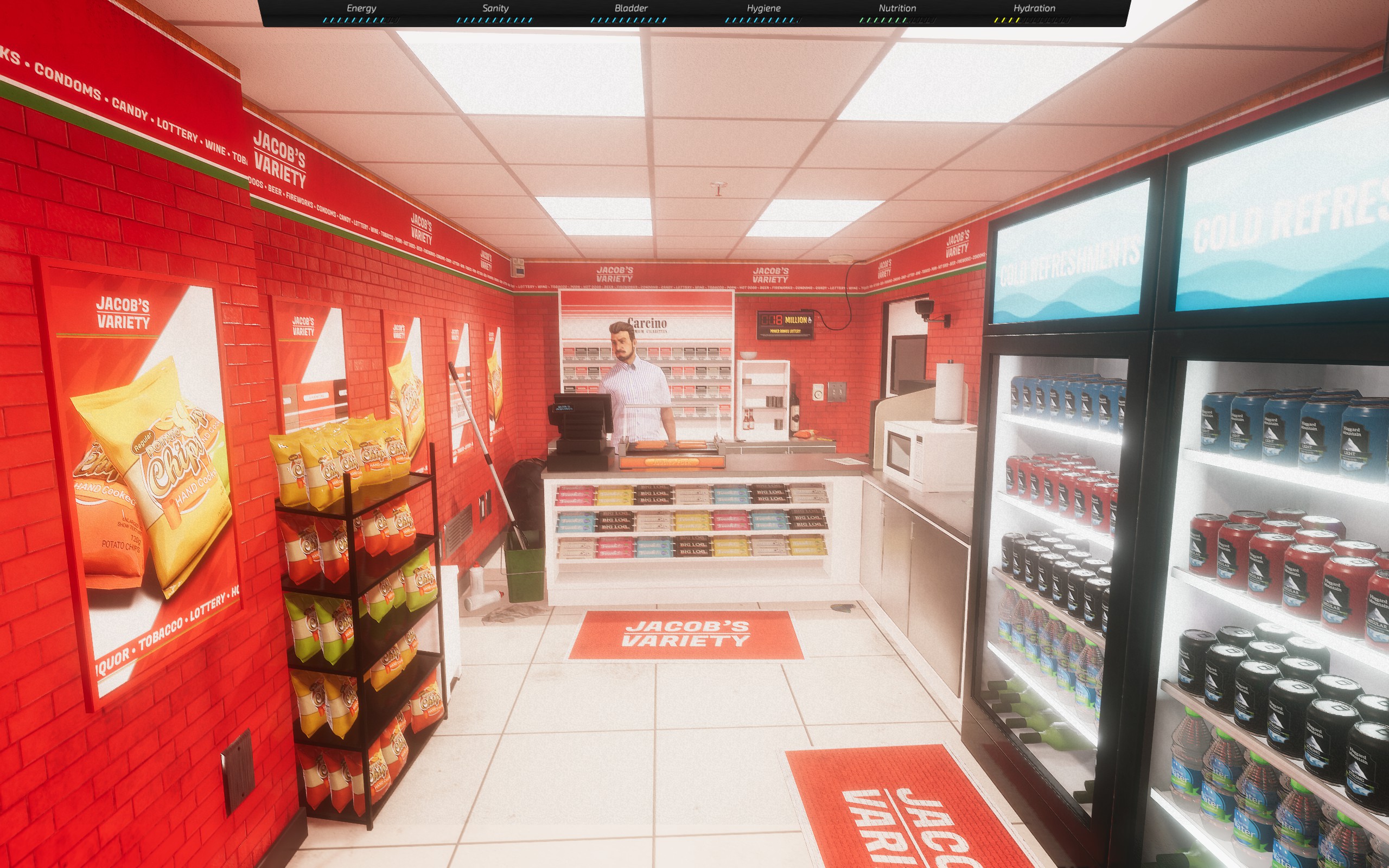 The last building, and probably the most important one, is the metro station itself. Enter this one and you’ll find yourself in the cabin of a subway train, tasked with avoiding speed traps and stopping at just the right spot on each platform, updating the destination board, opening and closing passenger doors and merrily honking your train horn. It’s a surprisingly decent and detailed simulation, and mildly challenging too if you multitask by playing the slot machine app on your in-game phone while driving.

Last week I was rightly called out for spending too much time describing what I imagine the inside of a submarine smells like, and not enough on whether the game is actually worth playing. So for the avoidance of doubt, you don’t need to play Metro Sim Hustle, not in early access, and not when it’s finished. But you should marvel that it at least exists, and respect the brave creative endeavours of a man whose sincerest desire was to create a purgatorial train simulator that’s also about peeing on everything and selling wine to alcoholics who hang around in strip clubs.