If you click on a link and make a purchase we may receive a small commission. Read our editorial policy.
Premature Evaluation is the weekly column in which Steve Hogarty explores the wilds of early access. This week Steve deals out sea justice in UBOAT.

You know you’re in for some serious submarine business when there’s an option to toggle the curvature of the earth on and off. I’m still not entirely sure what a flat earth would mean for a submarine, in any practical sense. Perhaps if the submarine wandered too close to the edge of the world it would spill over the precipice of a cosmic waterfall and tumble through the infinite void forever?

Maybe with round earth switched on, the torpedoes would neglect to follow the imperceptible curvature of the ocean’s surface, instead tracing a tangential path away from the sub and out of the water, rising up into the sky and out of the atmosphere, and travelling for billions of lightyears before eventually landing in an alien dignitary’s hat during a critical moment in her speech to alien congress on the planet Korblax-388, earning her the nickname “Torpedo Idiot of Korblax” and destroying her nascent political career. 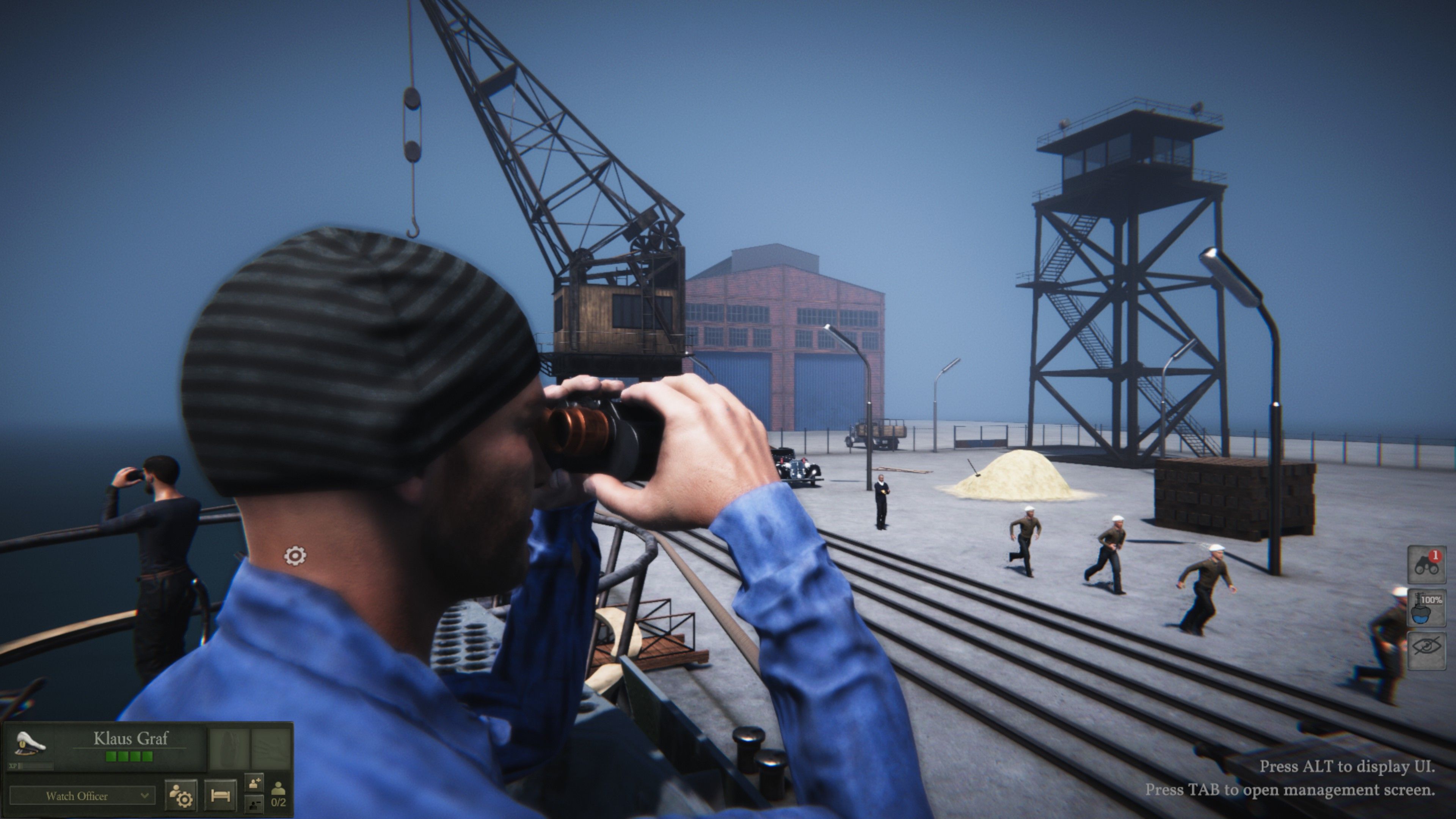 Maybe one of those things happens when you toggle the curvature of the earth on and off in U-boat (which is actually styled UBOAT, like you’ve just spotted one in the distance), I don’t know. But it is just one of many meticulously simulated aspects of commanding a German submarine during the wettest and wildest war we’ve had, World War: Part Two.

U-boat is as much about living aboard a horrible metal tube in the god damned ocean as it is about hunting down and kablamming enemy (that is, allied) ships. It’s a little bit This War Of Mine, a little bit Lovers In A Dangerous Spacetime, a little bit The Sims and a little bit Silent Hunter. Here is a submarine simulator in which you must make sure there’s enough cheese in the sub’s pantry for the guy who works the radio, or else you won’t be able to tune into nearby stations to hear the old-timey music as you bob past Cornwall. This is a game in which the colour of the cabin lights can affect crew morale. If your sailors get grumpy and start to slack off, you can send them to the brig for a time-out, so they can think about their behaviour, or summarily execute them in front of their friends to give their browbeaten colleagues a little more encouragement. That’s ocean law, baby. If you don’t like it, there’s the door, only please don’t open it because this is a submarine and everybody will instantly drown. 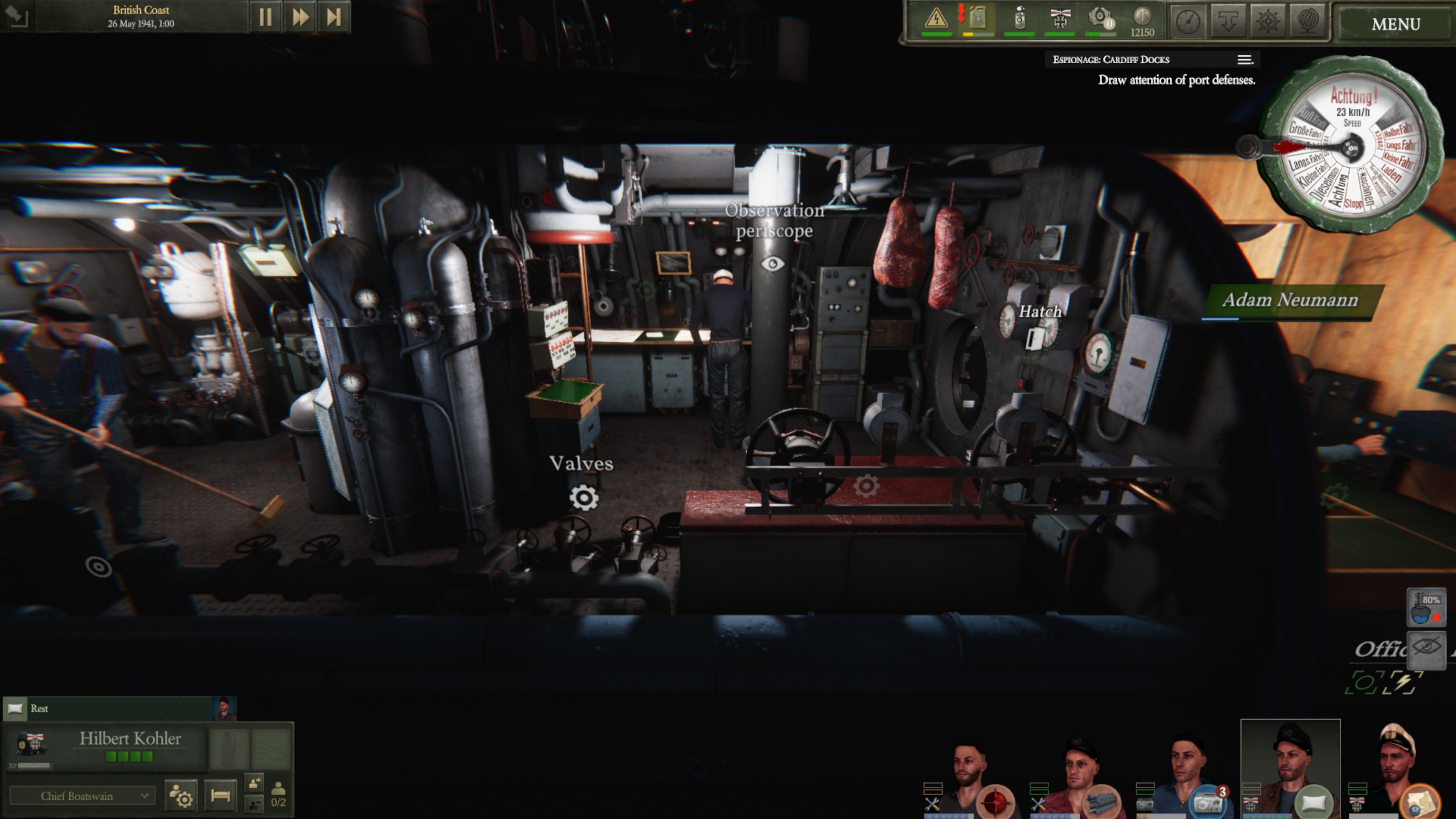 You manage your sinky-sinky-tub either by peering at a side-on cross-section of the boat – which pulls apart like a Micro Machines playset so that you can see all of the different compartments and sailors milling about inside – or in a full and detailed first person view, which better emphasises the claustrophobic conditions aboard what is essentially a greasy Pringles tube full of men who haven’t showered in months. Life aboard a submarine is like living inside a hollowed out turd, breathing in recycled farts and waiting for the day a depth charge inevitably blows a hole in the side of the hull, and the immense pressure difference sucks your entire skeleton out of the bottom of your feet in a fraction of a second, leaving your deboned skin flapping around in the ocean forever, like a horrible pink jellyfish.

So, at this Early Access stage of development you’ve got a thinly detailed sandbox, with docks scattered all around Europe that you can park your boat up at. Once safely in port, you can slip into a first person view to take control of an individual officer, clambering out your submarine and onto the dock. There you’ll find a mission giving Nazi commander standing next to a gleaming black Mercedes Benz 770, looking like exactly the kind of dude who’d crack open the ark of the covenant and get his face melted off, given half a chance. 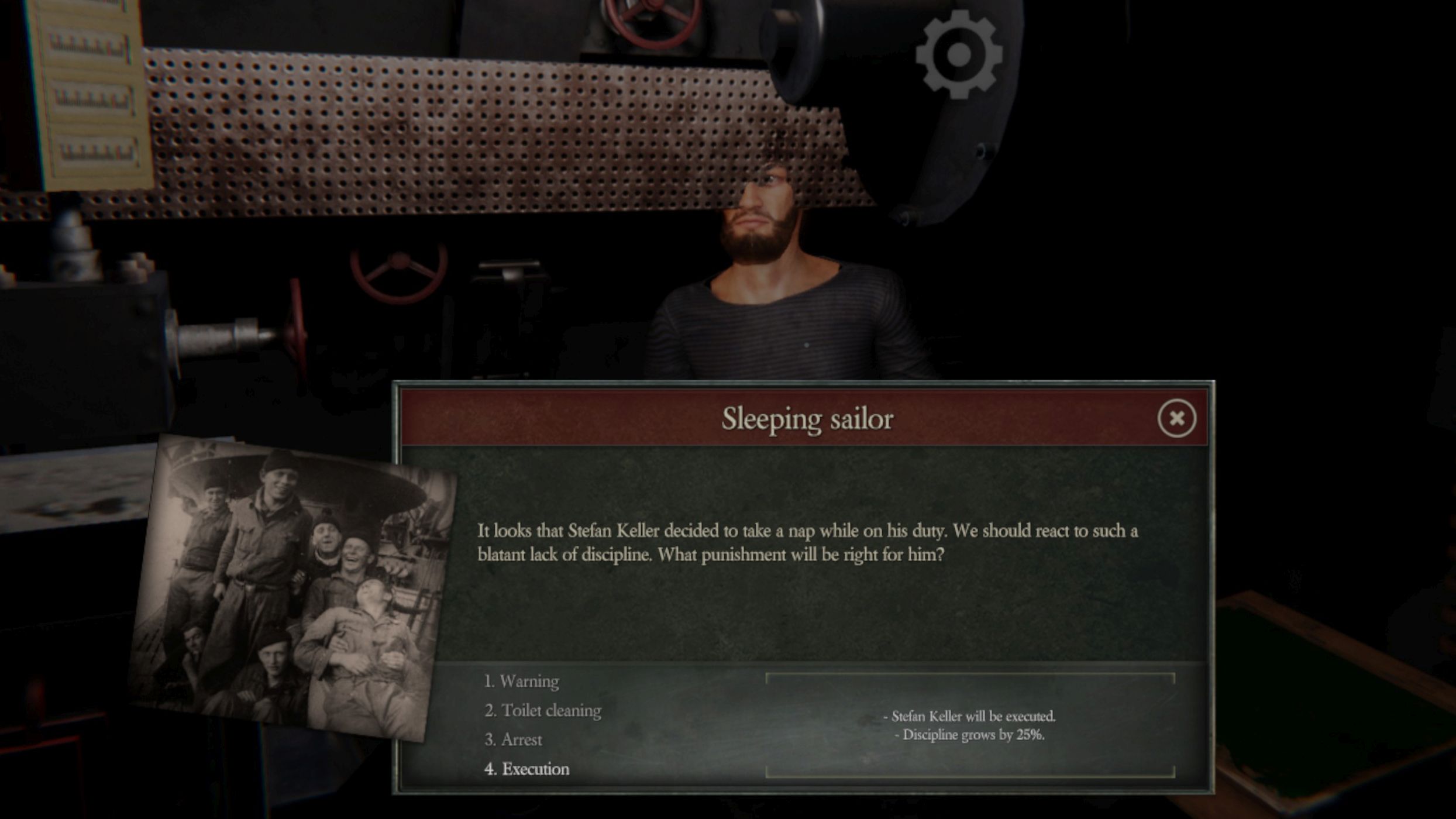 You’re basically a freelancer, taking on quests to rough up convoys and sneak spies into Britain under cover of darkness, and earning the funds required to restock your boat with cheese, and the reputation required to take on better missions. Now I’m no military historian, but I think real U-boat captains were kept on a slightly tighter leash than this, and that Nazi generals didn’t tend to stand around on docks like spooky perverts, just waiting for any passing submarines to come along so they could offer them one of three different orders to follow. And I’m sure there was plenty more cheese to go around.

There’s a tutorial that runs the gamut of the kinds of interesting challenges you can expect to face as you navigate the open waters. Combat is technical, and very much by the book, as you assign your officers to periscopes and radio operators to hydrophones, to reveal just enough information about the enemy ship (its heading, speed and so on) that you can confidently launch a torpedo at it. You can jump into first person view during these encounters too, leafing through a reference book of ship silhouettes to determine what species of boat it is that you’re trying to murder. If your sub gets hit, you can evacuate and lock down individual compartments and turn on pumps to try to mitigate the flooding. Equip a sailor with a breathing apparatus and they can enter flooded sections of the boat to repair the damage, and hopefully salvage at least some of the wet cheese. 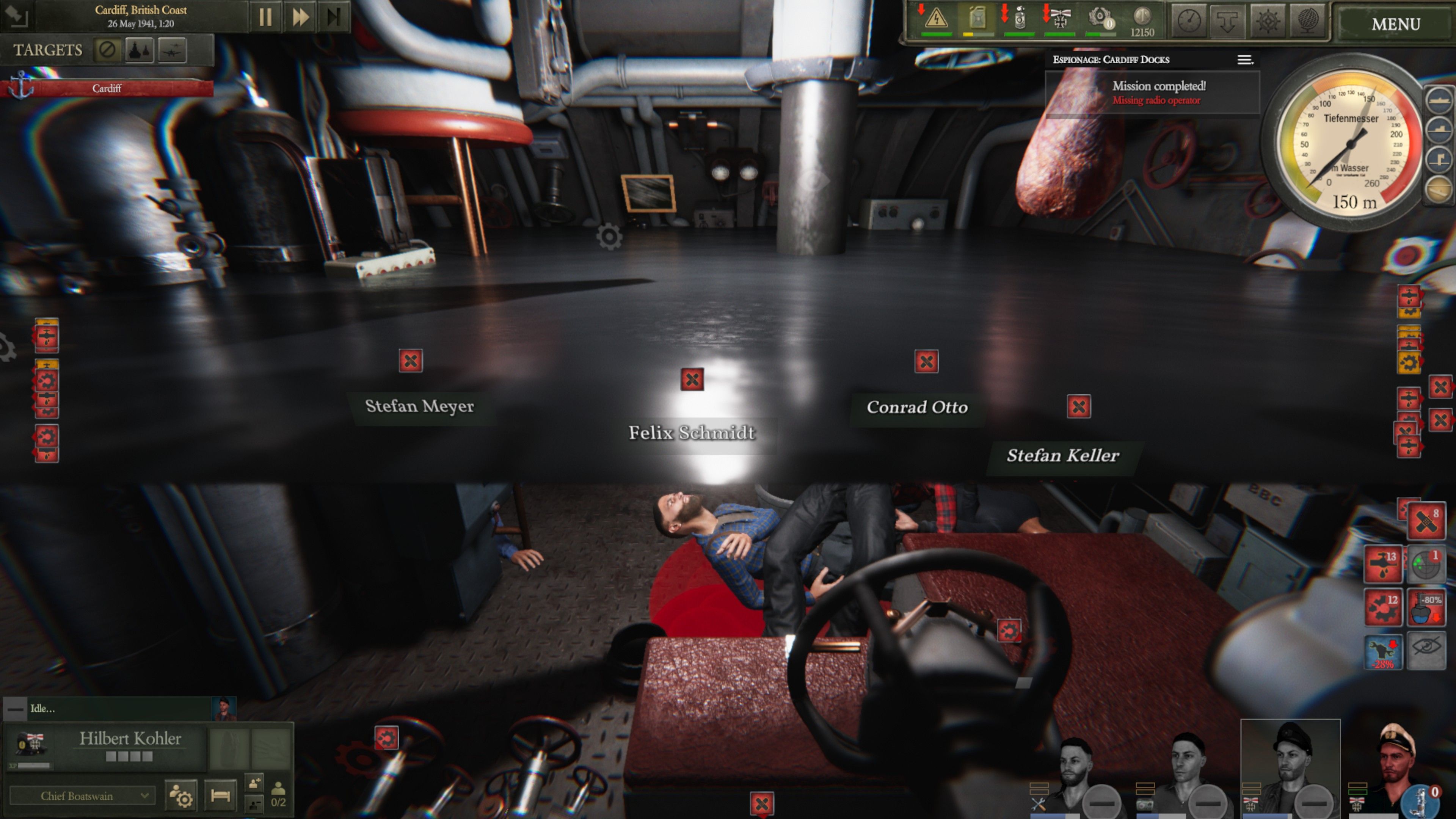 That pregnant, half-minute pause between launching a torpedo and seeing it connect with its target is as thrilling as always. It’s by far the best bit of any submarine game, as a hush of anticipation descends on the crew – like they’re waiting for the Eurovision results – and the sonar guy gravely counts down the seconds until impact. Then an almighty kabloom, and on the pitch-dark horizon a hot orange fireball illuminates a rising plume of thick smoke. You did it. Hundreds of British sailors are dead and burning, or singed and drowning in the English Channel. That’s one in the eye for Churchill, and one step closer to victory for the Nazis.

Or if you’d prefer not to alter the course of history, just do as I did and get jammed sideways in a harbour on your third mission, while attempting an elaborate 47-point turn to extricate yourself from a narrow dock. All that it takes to defeat fascism is for incompetent men to get their dumb submarines stuck in a bit of the scenery for absolutely ages.