After a week of rumours and leaked images, Microsoft's Xbox Adaptive Controller is finally official - and it works with Windows 10 PCs, too. Designed to let people with limited mobility play games with their own button, joystick and switch setups, the controller is a fantastic step toward making games more accessible to those who can't use a traditional Xbox controller or mouse and keyboard.

It connects to your Windows 10 PC via Bluetooth and comes with a whopping nineteen 3.5mm jack inputs dotted around the back, allowing you to remap every Xbox controller button imaginable to whatever assistive input device you like. You also get two USB ports for left and right thumbstick inputs, a 3.5mm stereo headset jack and your traditional Xbox, View and Menu buttons.

The Adaptive Controller doesn't necessarily need to act as a central hub device, though, as it can also be used as a standalone controller thanks to its two huge black buttons. Light to press and and fully programmable, each one can be remapped to whatever button function you like using the free Xbox Accessories app you can download from the Windows 10 Store.

Out of the box, those buttons will bring up the Xbox dashboard nav on your PC, but those wedded to Steam need not fear, as Windows 10's Xbox app still lists every game that's currently installed on your PC, so it should still be relatively easy to launch your favourite games. Of course, the controller is also compatible with Microsoft's existing Copilot feature, which links a pair of controllers together so two people can play as one from different gamepads. 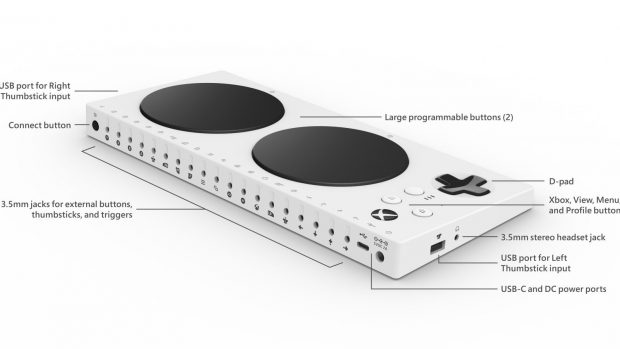 If all that wasn't enough, you can also create up to three extra controller profiles (in addition to the default one) using the Xbox Accessories app. To switch between them, all you need to do is tap the small white button above the d-pad. The Adaptive Controller also has a rechargeable internal battery so it can be used on the go, but you can plug it into the mains via USB-C or a regular DC power cable as well if your assistive setup requires a more substantial power draw.

Naturally, gaming charities have welcomed the controller as a huge step forward for accessible gaming, and UK charity SpecialEffect was one such organisation that worked with Microsoft directly to help bring it about. Dr Mick Dongean, CEO of SpecialEffect said:

“This has been a milestone collaboration for us. Our experience in helping people with complex physical disabilities to access video games has enabled us to provide not only very relevant advice about features and design, but also direct feedback from a user-centred perspective. Microsoft has a product here that has the potential to help many people globally to enjoy the magic of video games.”

The Xbox Adaptive Controller will be available later this year from the Microsoft Store for £74.99.