If you click on a link and make a purchase we may receive a small commission. Read our editorial policy.
Developer: Archpray Inc.
Publisher: Rayark Inc.

I’m almost tempted to celebrate the appallingly named MO: Astray for not being a Metroidvania. I loves me some Metroiding, but it’s proved a real pleasure to play an action-platformer that focuses on continuous progression without a trace of backtracking. It’s especially a pleasure when it happens in a game as precisely designed as this. 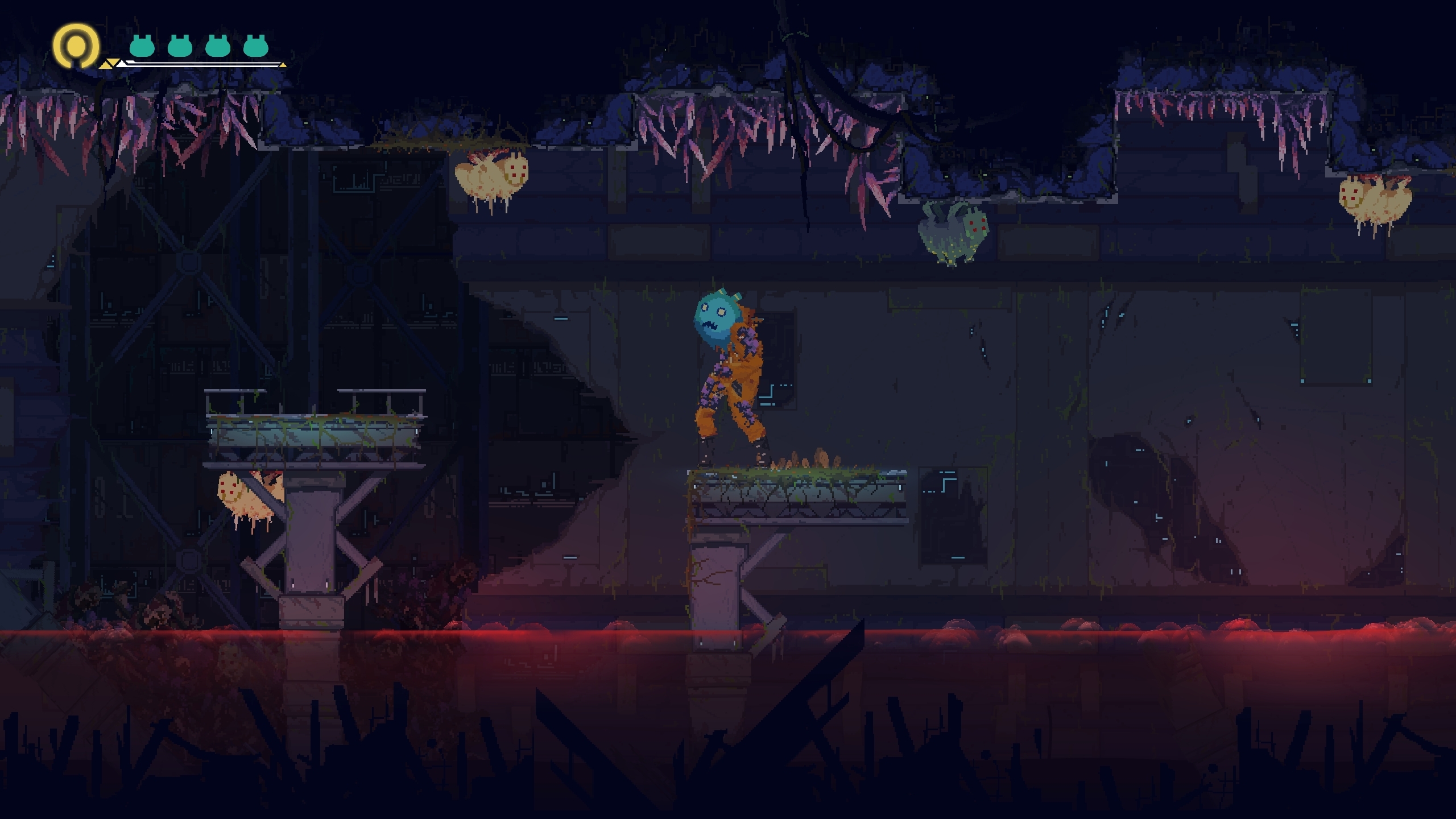 MO, I’m here to report, is a blue blob. Seemingly manufactured after some really-quite-colossal scientific disasters in an underground facility, it requires you, very simply, to get it the hell out of there. Doing so is going to take you on a long, twisty, puzzly, ever-changy adventure through some very pretty pixel-painted subterranean realms. And with some very special movement.

Being a blob, Mo (let’s drop this meaningless capitalisation) oozes about rather sluggishly, albeit quite adhesively. He’s capable of sticking to the sides and underneaths of walls and objects for a limited time, before squelchily peeling off and falling. Fortunately, his similarity to a garden mollusc ends here, as he’s capable of rapidly projecting himself through the air. Ideally directed with a controller, Mo moves on the left stick, while the right stick aims an arrow pointing away from him. Press a trigger and he spoings off in that direction. And this is your primary method of movement - imagine Dandara, but with her pockets and shoes full of goo.

This movement conceit is the springboard from which the game's ever-evolving puzzles boing. There’s a lot of potentially obvious picks: dodging spikes, hitting buttons, navigating moving platforms, and so on. But all are deployed with real finesse and absolutely pixel-perfect distance placement, to make things pretty tricky, but consistently and defiantly fair. (The greatest barometer of game fairness I’ve discovered over the years is the question of to whom I instinctively aim my invective on failure. When I shout at a game, something’s wrong. When I call myself inventive swears, it’s entirely my fault.) 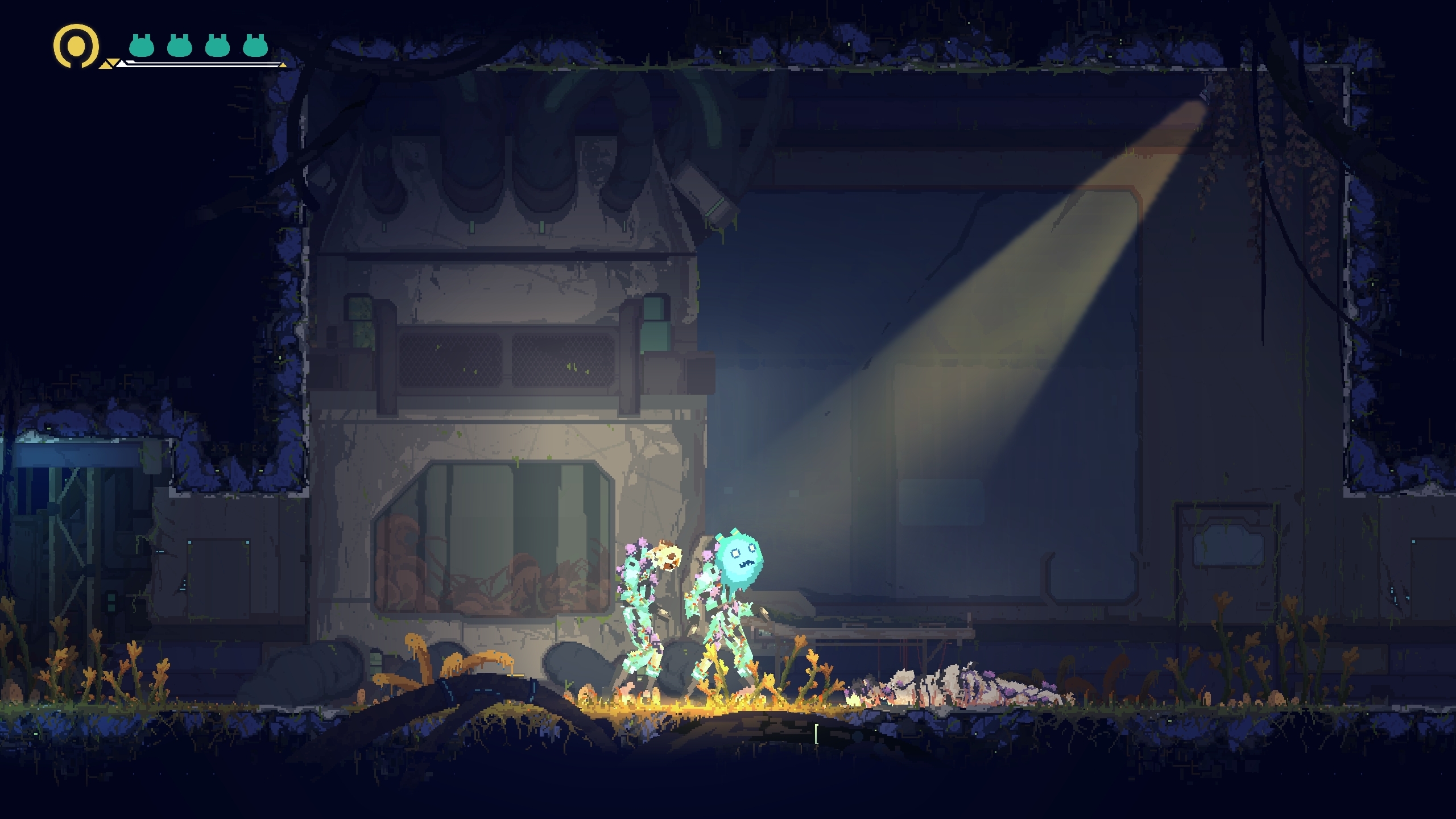 As you progress, new abilities are gained, and it’s here that simply 'not being a Metroidvania' ends up feeling like a luxury. Because rather than retracing your steps to do what could not be done before, here it’s the game that adjusts to what you can now do. So when you can double-jump, or speed-dash, etc, the challenges change accordingly - all fresh, all new. Now, I realise I’m describing the simple fact of how many platformers worked for many years, but these days it feels refreshing.

The game further emphasises its puzzly ways with the introduction of an occasional blob-clone. Passing through one particular ray creates a less-able version of your blob elsewhere on the screen, and suddenly you’re playing single-player co-op to transverse the challenge, often in intricate ways that require a bunch of practice to get right.

This, I suspect, is where Mo may lose some people. It does occasionally dip its toe a little too deeply into the murky waters of surprise deaths, requiring you to replay sections a bunch of times until you can work out how they are navigated. This isn't the norm, and usually it's not my preference at all, but the game is so eminently reasonable about how it handles this that I found it hard to begrudge. Death only ever sets you back to the start of the most recent leapy challenge - almost too generous a provision, if anything - so repeated attempts are as immediate and unpunishing as possible. 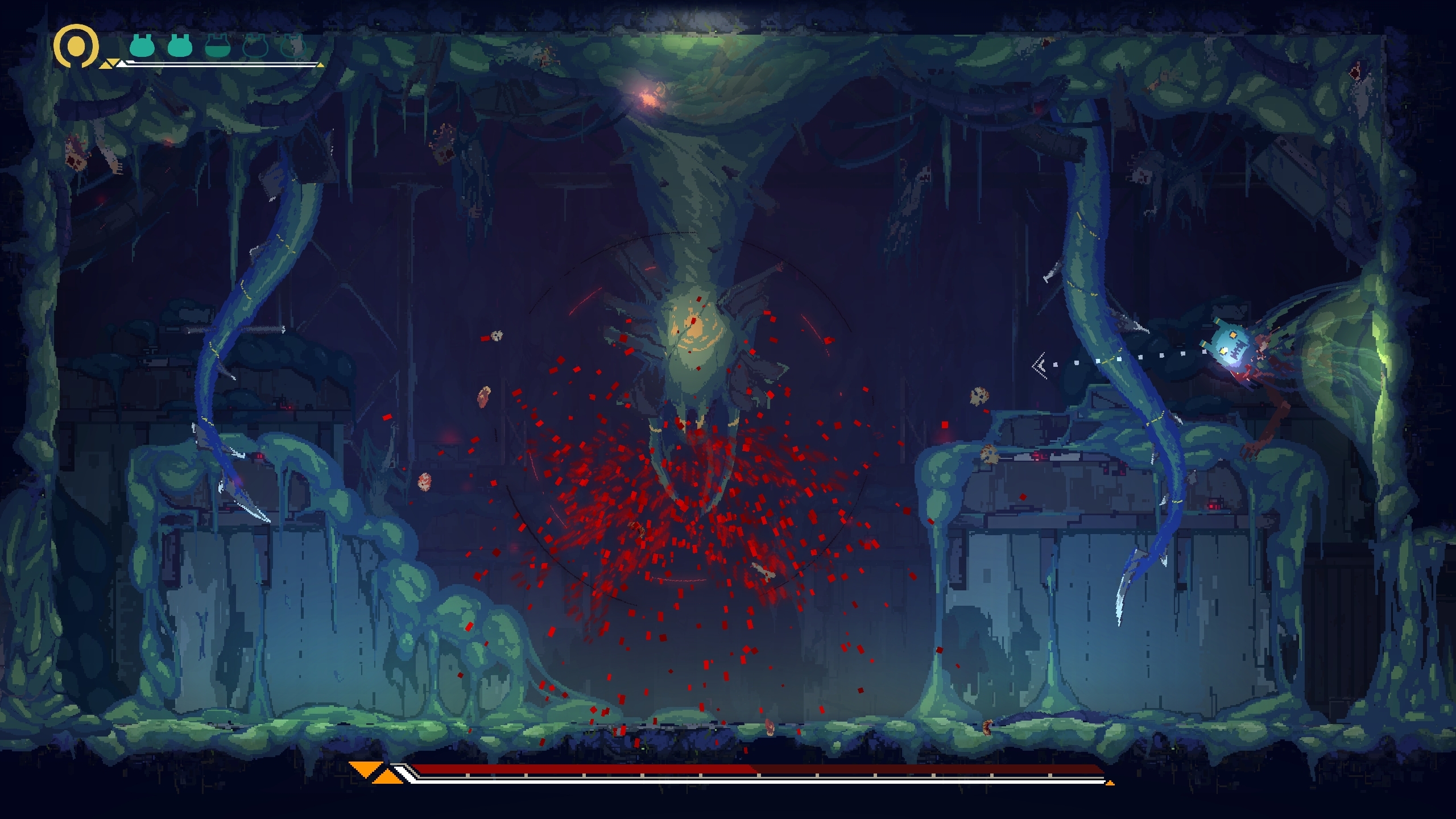 Perhaps a surprising twist, given the beautiful pixel palette, is quite how macabre and gory the game is. I rather quickly changed my mind about letting my boy watch me play, after far too belatedly leaping forward to cover up a particular gruesome moment with my hands. But it’s splendidly grisly! In the game’s tale your enemies are, at first, humans corrupted by some sort of alien plant. Mutants, often grimly depicted, that you can dispatch in blood-soaked incidents of falling scenery. When you get the dash move, jumping on and off them rips their head hideously from their shoulders. I loved it. But it was not for the boy.

You’re jumping on the mutants' heads in the first place, by the way, because it allows you to take temporary control of them. Sometimes this is so you can move them about: to open a door with a hand-scanner, or pull a lever. Other times it’s to use them as platforms, like for instance when you find a collection of them hung appallingly from metal hooks, and bounce between their heads in the most tasteless fashion. finally and most interestingly, whenever you're on their faces, you’re able to read their minds, finding out who they were and reading their last thoughts. And this works for every single humanoid enemy in the game, with each bearing a unique description and tale. 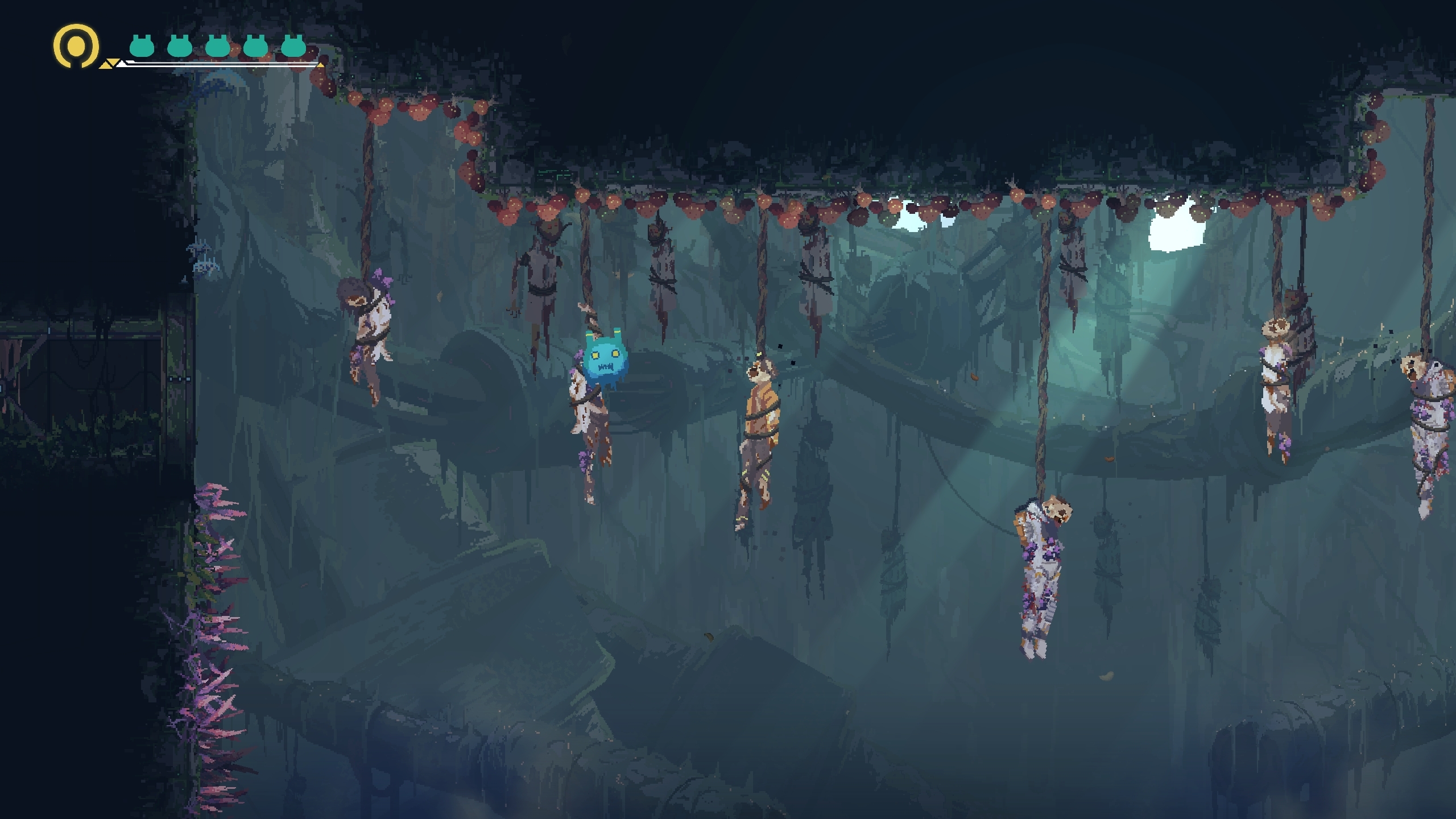 On that note, it’s worth noting that this lengthy game does rather over-burden itself with story. There are the scenes between chapters. There are the comic book summaries. There are the flashbacks of some of the corpses. There are the bursts of texts when picking up extra life. There are the scans of mutant brains. And most of all, there’s the voice that frequently blabbers away while you’re playing. Most of these are fine, all adding to a fairly standard tale of Science Gone Wrong, and expanding into a more loosey-goosey mishmash of other creatures and lifeforms.

It’s forgettable, but a nice enough background. The only real issue is that voice, which seems to provide the most important guiding information, yet exists only as a woo-wah nonsense sound with subtitles - subtitles that appear while you’re in the middle of stuff. I can’t tell you how many lines I missed because the voice decided to start its blither while I was in the middle of an intricate series of tricky jumps and catches. 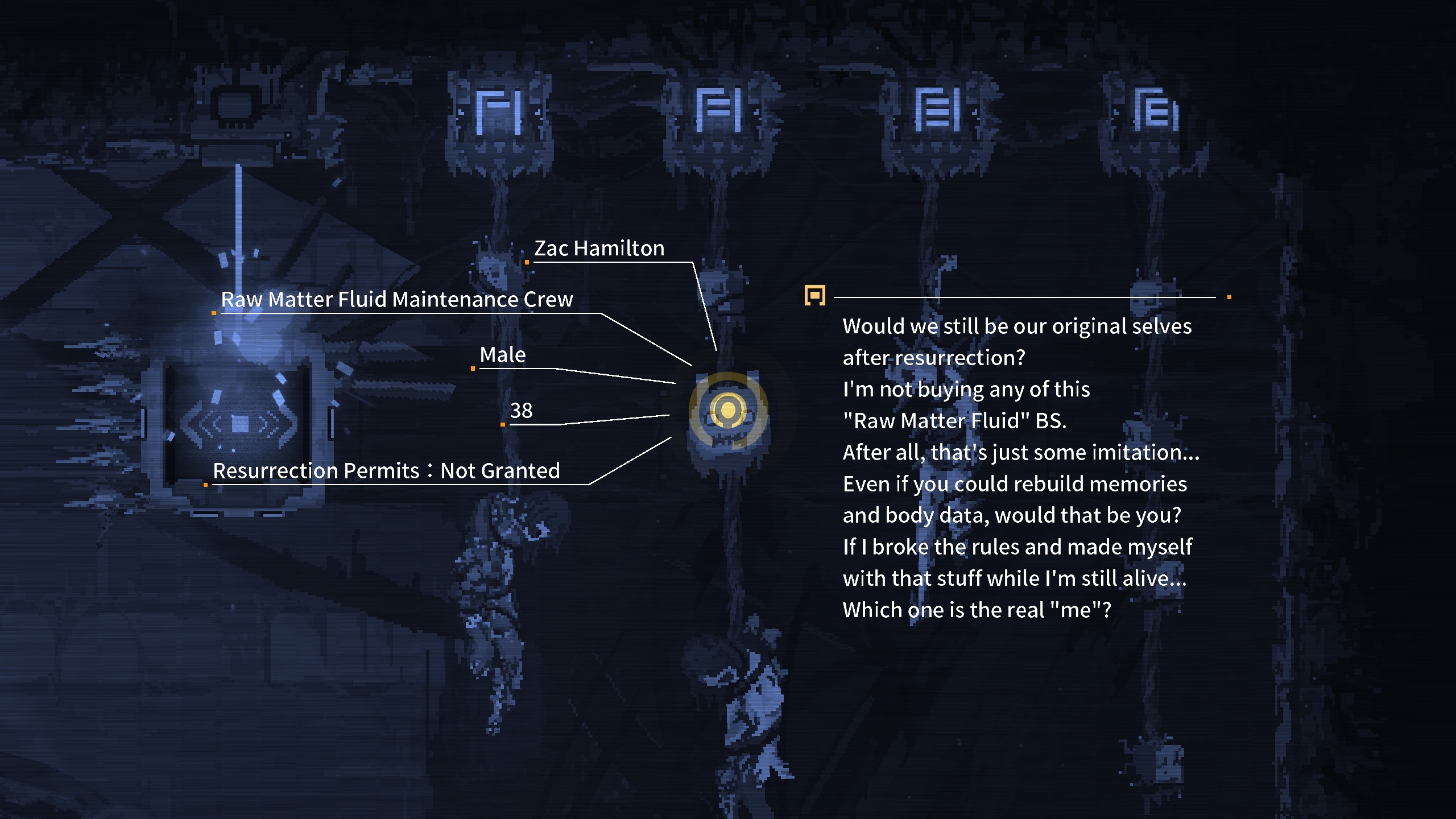 I don’t want to over-egg the gelatinous pudding, but I do want to celebrate how good MO's controls are one more time. This is the sort of game that could only have been a complete success or an enormous failure, and the difference is probably only a micron wide. But the fact that I’m so gleefully bouncing between slow and fast dashes, hovering in mid-air to make split-second decisions, dodging past swinging spikes to land on a platform just in time to switch over to a clone to hit a button… Those are the sorts of standards I expect from Nintendo, not from a student developer group.

I’ve absolutely loved this. It’s so refined, so well crafted, so supremely gory for something with such deceptively simple presentation, and has a difficulty pitch that feels always challenging, but remarkably fair. At a measly £11, you’d be silly not to give it a go.