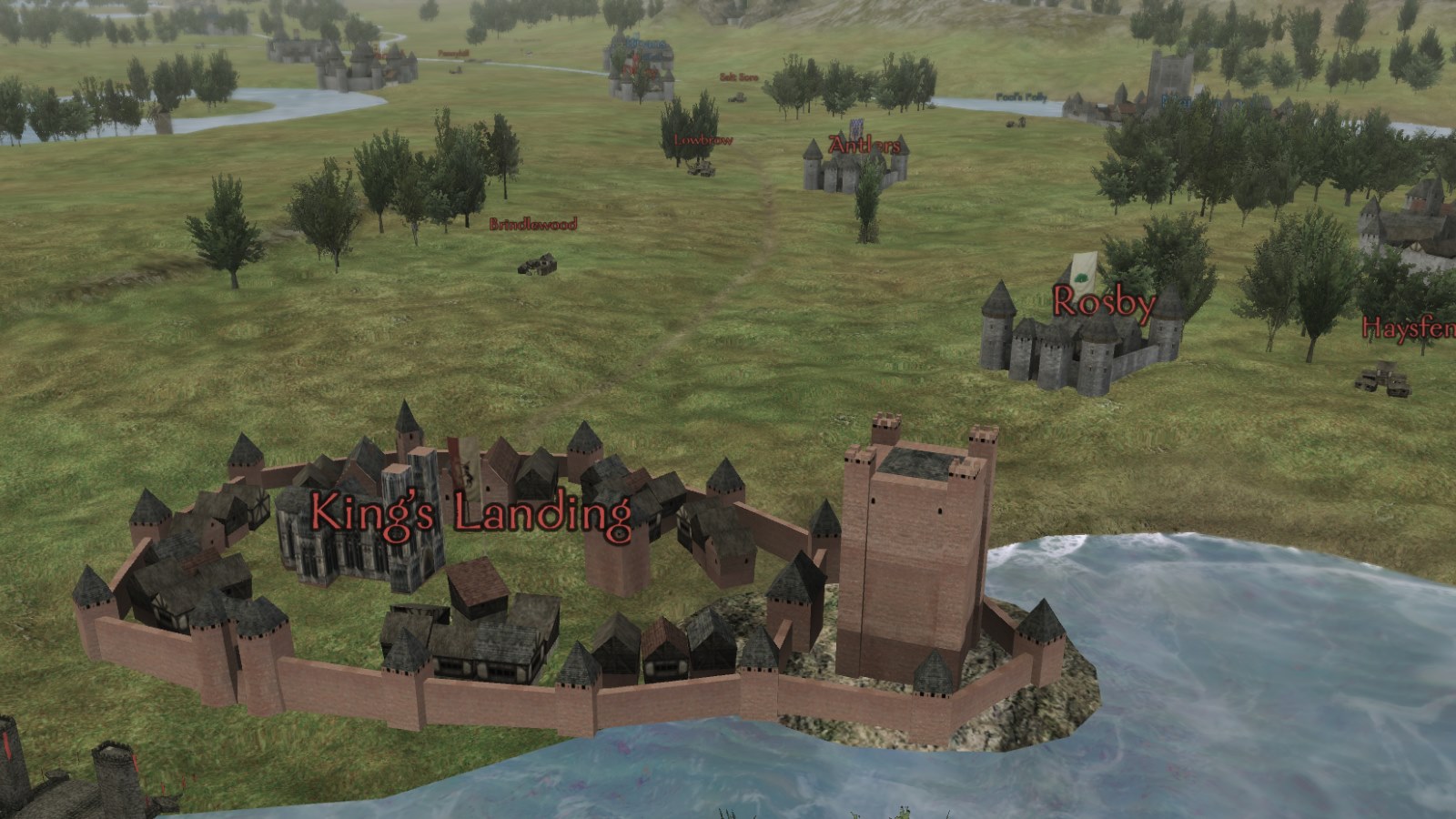 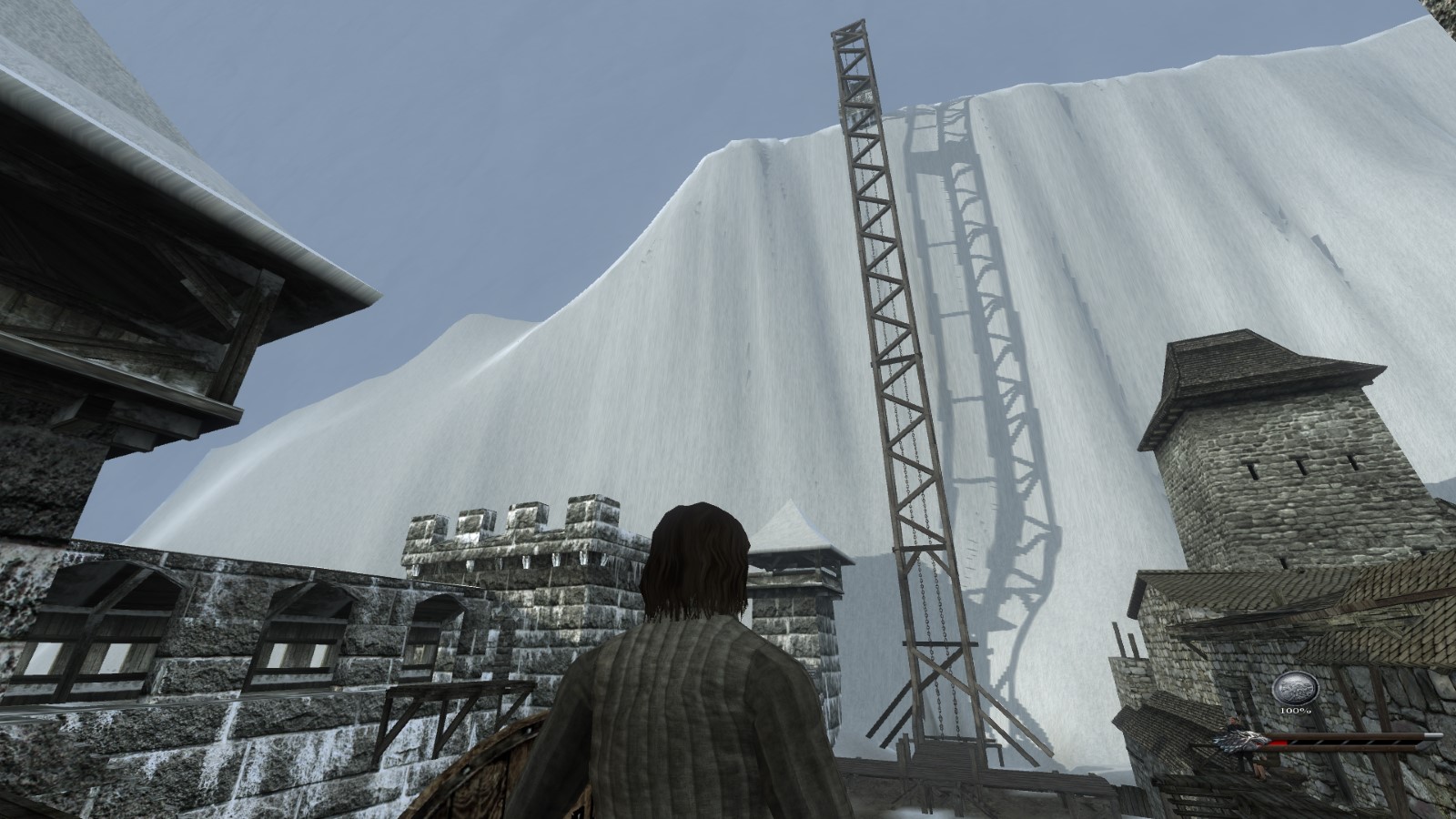 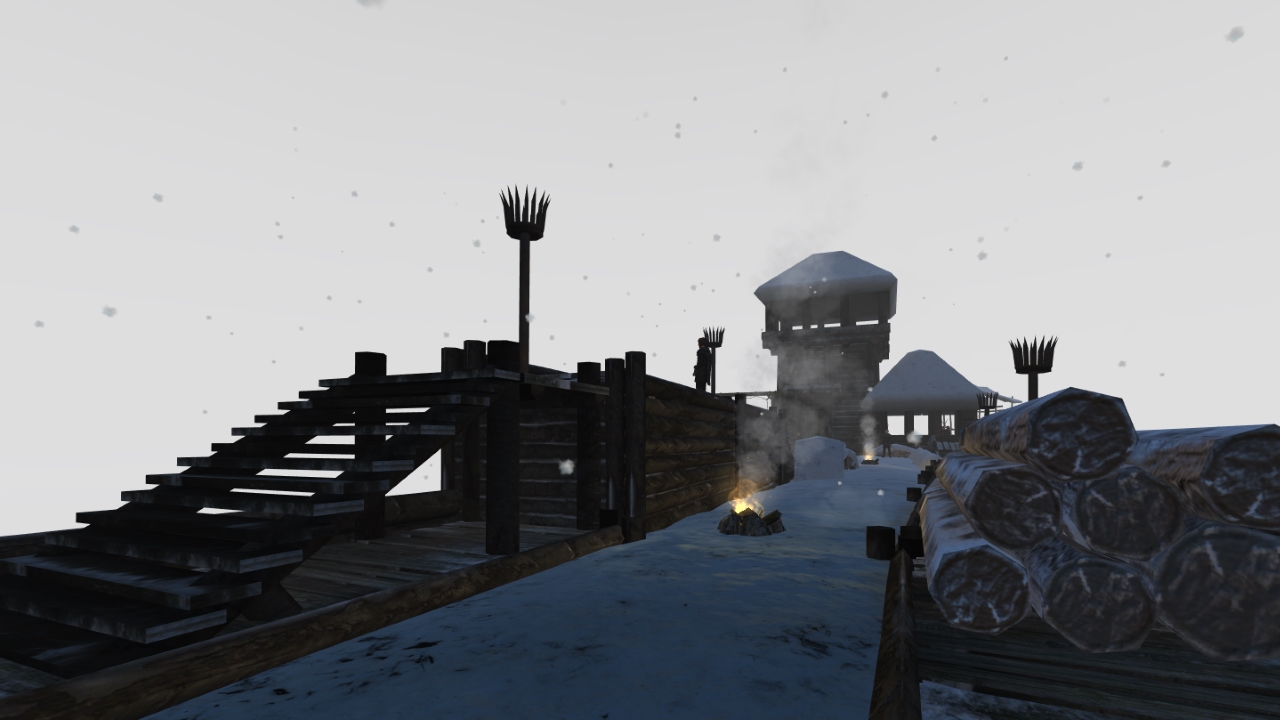 And as the dust settles over King's Landing (and your TV), the Game Of Thrones concludes until George R. R. Martin finishes writing his own take on the finale. Where does that leave a fan desperate for their next hit of medieval grimness and scheming? Fan-fiction, probably. Or, thanks to the wonders of modding, interactive self-insert fan-fiction!

Today I'm taking a look at two massive Game Of Thrones mods for medieval mercenary sim Mount & Blade: Warband that are vying for a prize greater than any uncomfortable-looking (and now rather warm) throne; your free time.

Stick Em' With The Pointy End

Despite being nearly a decade old, Mount & Blade: Warband remains popular, in part due to its very active mod scene. There are dozens of notable total conversion mods for the game, letting you replace its pseudo-medieval world with everything from gritty historical simulations to Star Wars. But to celebrate our first week of TV without Kit Harrington looking like he's on the verge of crying, it's off to Westeros we go!

The two mods we're examining here, A Clash Of Kings and A World Of Ice & Fire, - are both enormous labours of love. Large productions in their first iterations, they've been updating for years with new features, quests and details. Both of them could be considered advanced mods, adding more management systems to Mount & Blade's already-exacting simulation, so as such, you should probably clock a few hours with the base game before jumping in, but I won't stop you if you're desperate to get your Targary'on.

Installation of either of these mods is a walk in the park. If you've got the base game on Steam, you merely need to subscribe to the Steam Workshop version and let it automatically download, then pick it from the Mount & Blade: Warband launcher screen. Alternatively (and applicable to any other release of the game), you can download the mod via Mod DB and unpack it to your Mount & Blade: Warband/Modules folder. It should sit comfortably alongside "Native" which is the default game campaign.

In the Lannister corner, we have:

A Clash Of Kings by "Cozur" 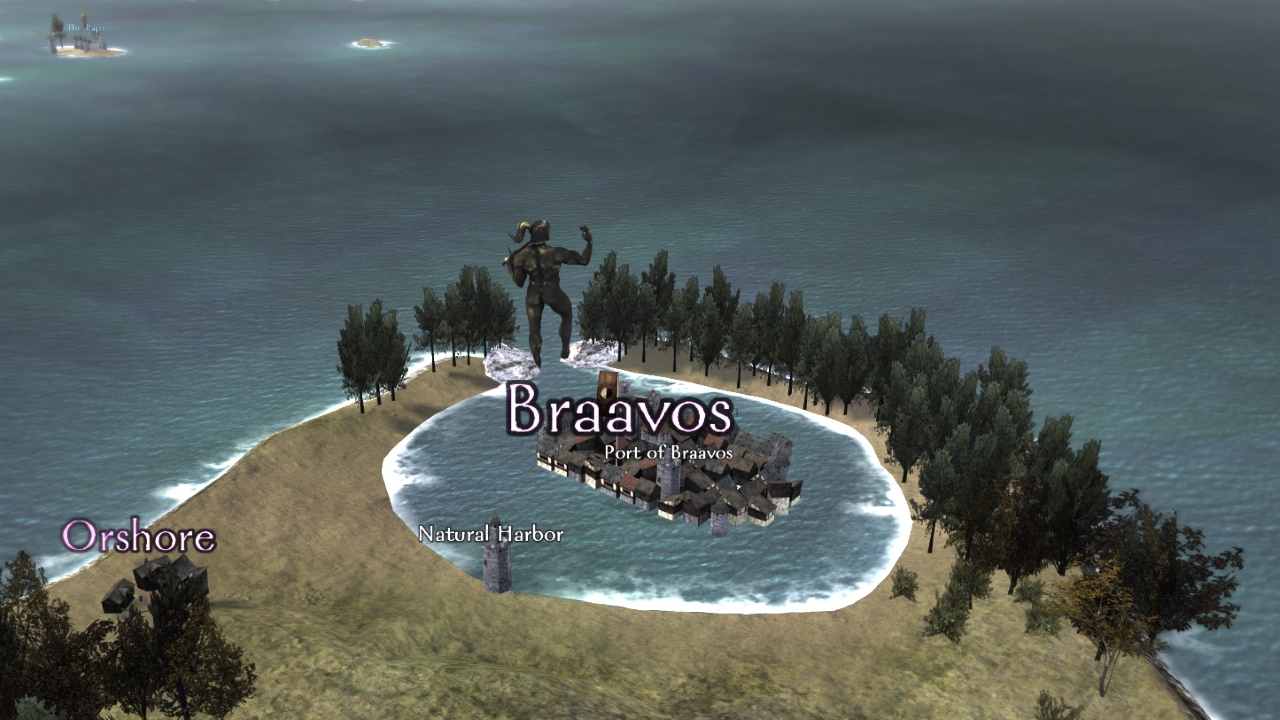 Gaming The Throne 101: Not getting stabbed 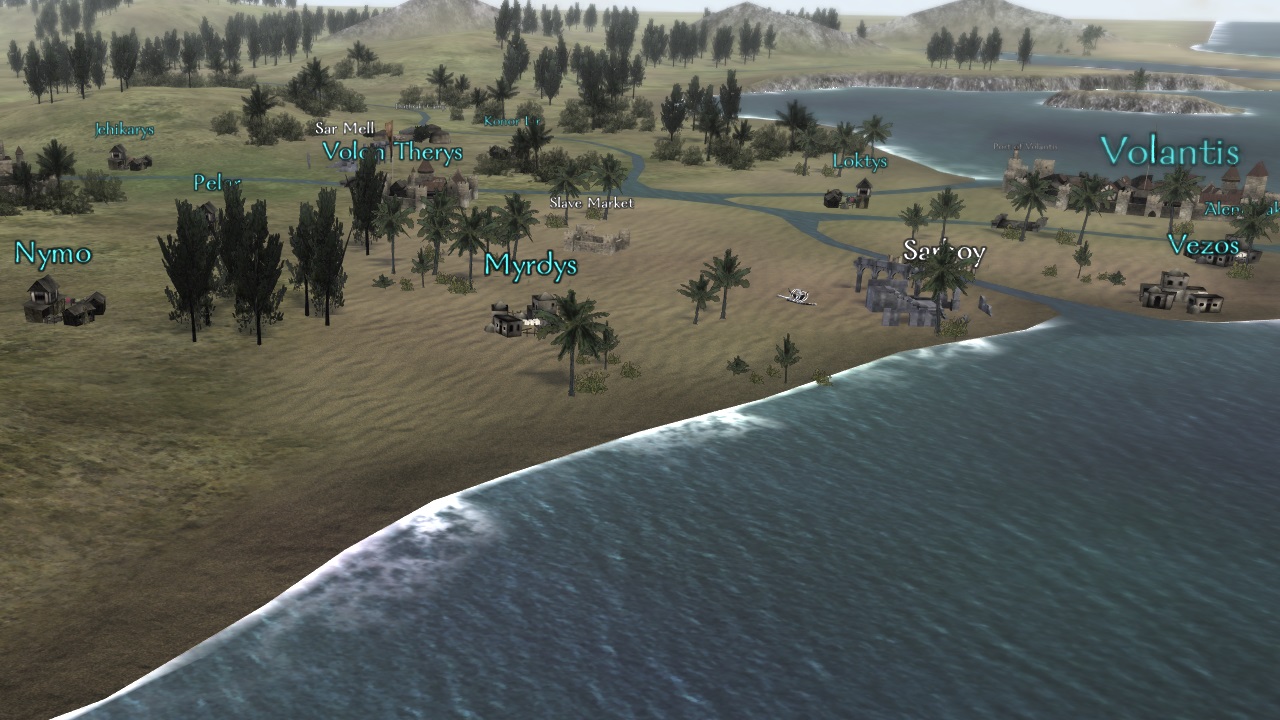 Of these two mods, A Clash Of Kings feels slightly more accessible for Mount & Blade newcomers, although that doesn't make it easy. Similar to the main game, it begins with a quick test that you can defend yourself in a fight against a single robber, before placing you firmly on the fringes of Game Of Thrones lore, and just off the Dornish border. All you've got is word that there's war coming, and your character has resolved to stick around and try to turn a profit from it.

One of the most curious features of A Clash Of Kings is its historical sites, usually denoted with white names on the map. Once you've picked up a few followers (or at least Brynden Storm at the starting tavern, who is a skilled surgeon), bumble around like a confused tourist and look for vaguely interesting structures -- destroyed buildings, statues, odd hills, caves and whatnot. Approaching them will get you some sentences of lore, plus a fistful of experience points. You can ding a few levels practically for free.

Unless you plan on fighting from the back row all the time, you'll want to pour some stat points into strength early. It's easy to start out with a character inventory full of weapons and armour you're just not beefy enough to wear. Quite how a chain coif requires significantly above-average strength I will never know, but you should roll with it. Eighteen strength is a good number to access most worthwhile gear, while ten intelligence will allow you to read books for additional bonuses, and charisma is just where you should dump every free point after that because it'll let you lead more people.

A Song Of Too Many Verses 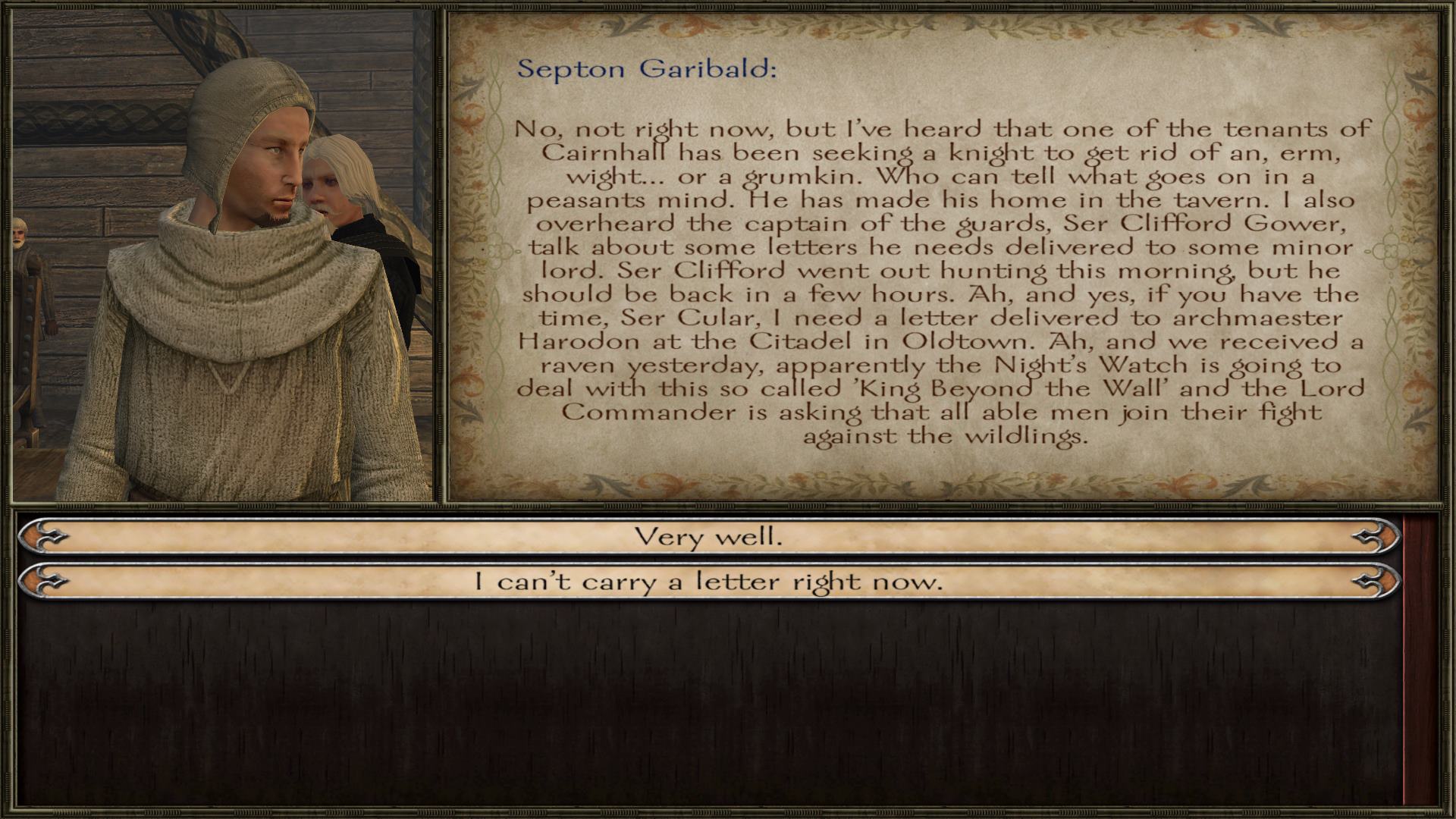 If you like your lore dense, then A Clash Of Kings is the mod for you, 'cos it feels like someone's creative writing sketchbook given life. Between the lore text you'll wade through while exploring, and the first handful of quest NPCs you'll meet, expect to read a lot. Characters feel like they say with a paragraph what could be surmised in a single sentence, but fortunately your quest journal will point you the right way even if you click through it all.

That's not to say it's all worth skipping. Brynden Storm's rambling makes sense, being a loquacious Maester with poor bedside manner for a healer. Some of the quests are nicely written too, making up for the game's limitations when it comes to scripted set-pieces. I'd recommend the quest given by a nervous peasant in the Weeping Town inn, sending you to deal with a Wight. You won't need any magical equipment, but you'll get to do a nice bit of walking sim-like adventuring through a spooky abandoned village. 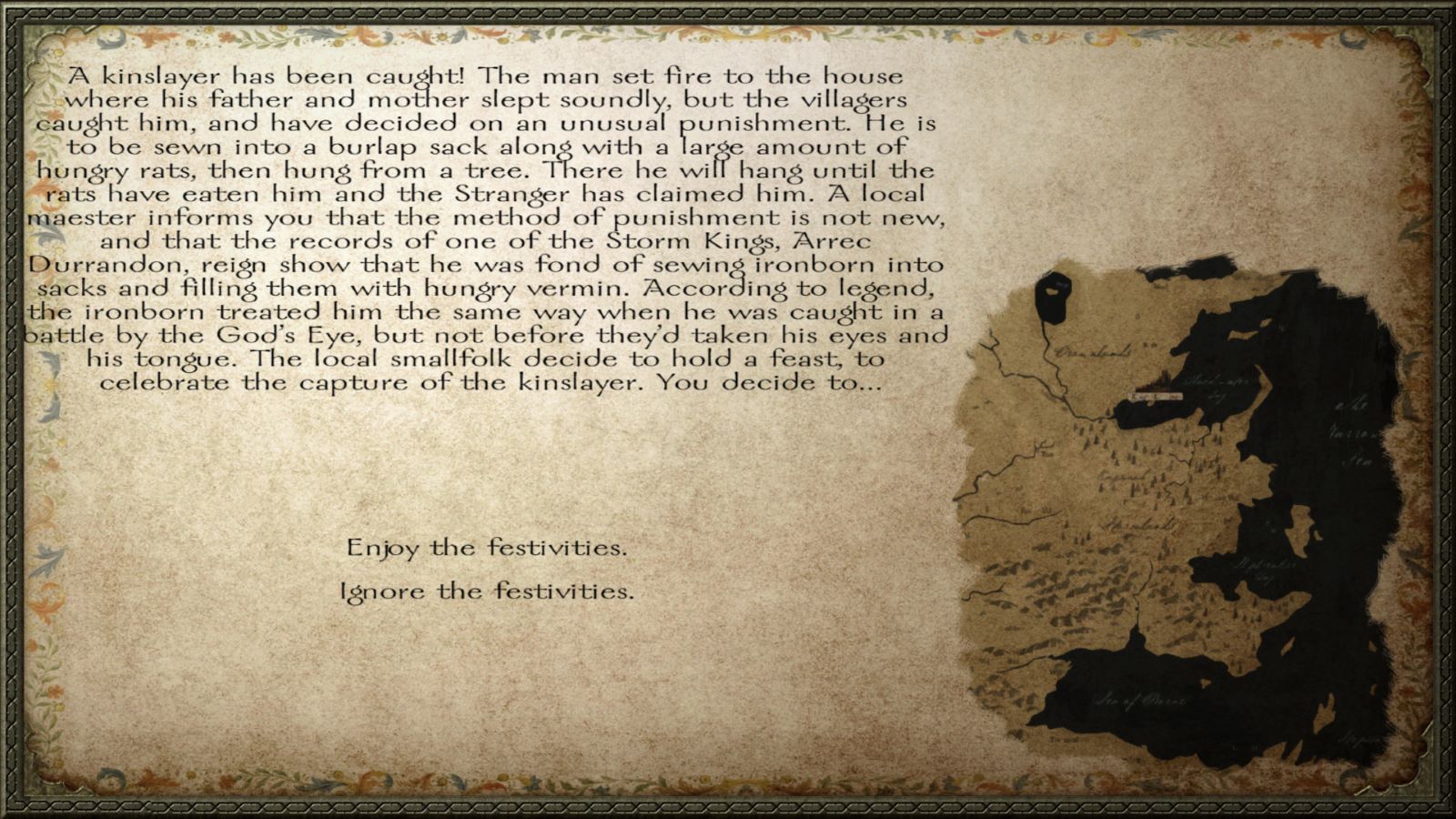 A Clash Of Kings is mostly concerned with the medieval warfare aspects of the setting, with no White Walkers, no Night King and definitely no dragons. Recent updates have further expanded on the more detailed human side of the setting with a greatly expanded fighting tournament system, where you'll see armoured knights in Westeros, and agile duelists down in Dorne.

A Clash Of Kings's more restrained ambitions make it easier to step into if you're relatively inexperienced at Mount & Blade. It provides an opportunity to explore and experiment with the setting without too much pressure. Your early days will be spent as a sword for hire, doing odd jobs, or following a lesser lord for pay and experience, and endgame involves setting up your own little fiefdom and managing it. Down-to-earth stuff. The more simulationist bent gives it a less predictable campaign in the long run, though. Let the clock run long enough and you'll see the plot go completely off the rails, and nations fall and rise in amusing ways. Better yet when you're the one that nudges a kingdom off the edge.

And now that we're all warmed up and stuffed full of juicy lore, let's take a look at our significantly more supernatural challenger in the Stark corner:

A World Of Ice & Fire by "Produno" 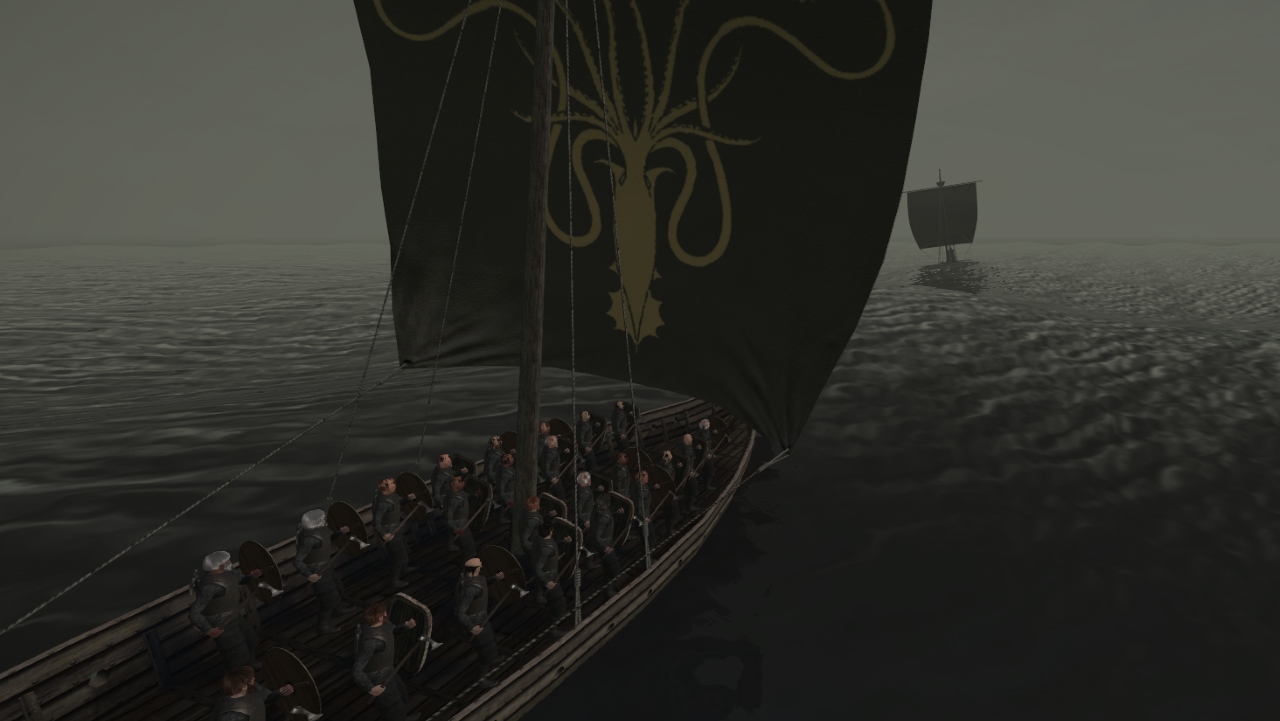 Ser Marty Stu, At Your Service 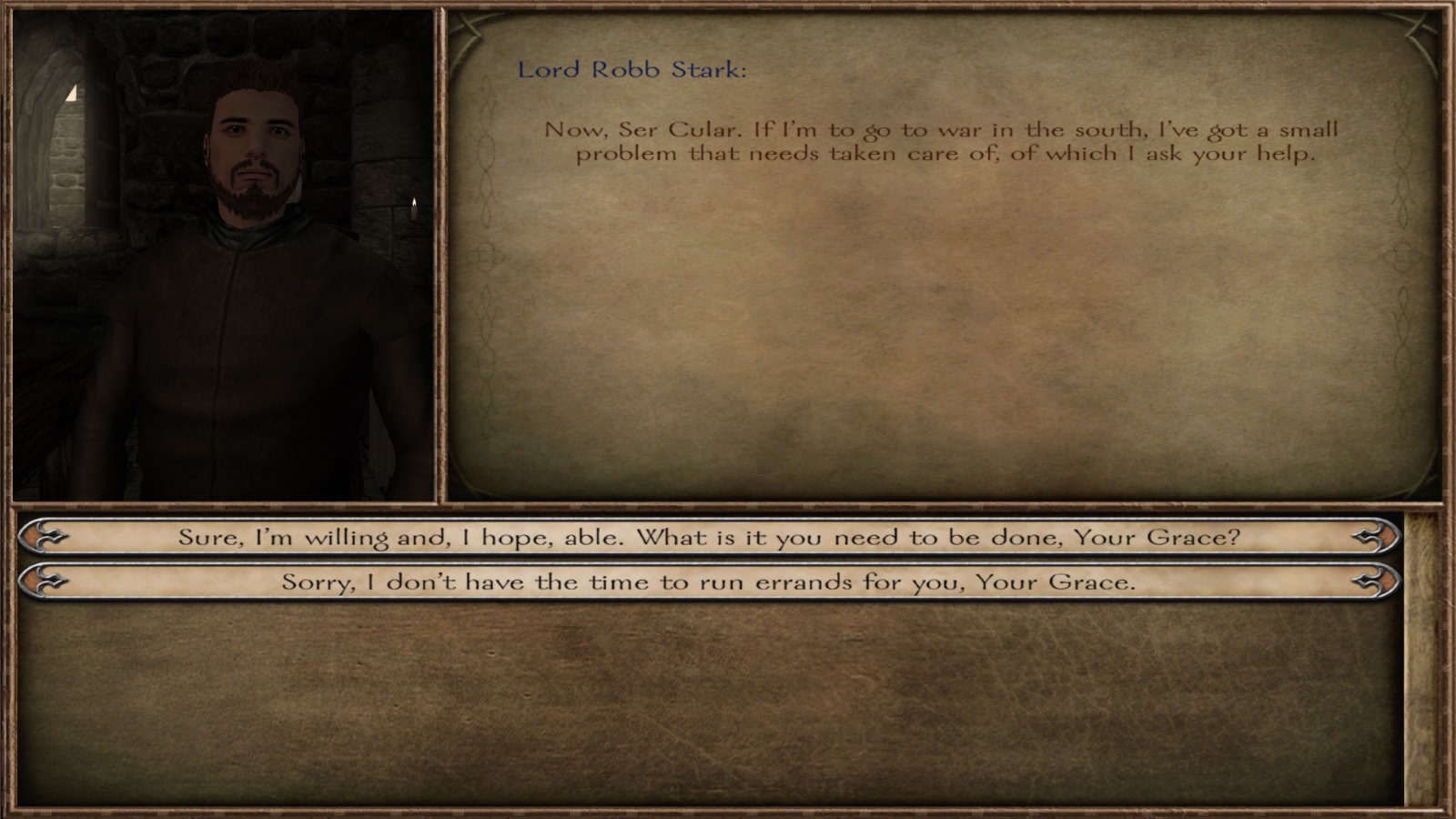 While A Clash Of Kings was happy let you scoot around on the periphery, A World Of Ice And Fire drops you right in at the deep end. After asking whether you want character names to match the TV show or novels, and whether you want to throw Westeros into procedural chaos (instead of scripted), it puts you right at the epicentre of the story. You're there when Sean Bean gets captured by the Lannisters, and the Starks task you with leading two of their men to Winterfell to deliver the news. Accepting their offer gets you into the main story within minutes.

Unfortunately, signing up with the Starks while in King's Landing paints a big red target on you, so you'll be chased by Lannister troops and bandits the whole way. My only recommendation early on is to pick nobility as your starting origin, which will give you enough clout to maybe pick up some peasant followers as you travel. Eventually you'll reach Winterfell, and find plenty of questing opportunities.

Once you've found your feet, there's a lot more to worry about in A World Of Ice And Fire. Bandits, broken men and other ne'er-do-wells roaming the map will home in on you with horrifying glee. Even when you've got very little to lose, there's still the chance of suffering permanent injury, thanks to a new advanced wounding system. Get hit hard enough and you'll end up with stat-hobbling injuries, and unless you get them treated by a Maester or other surgically-minded character (always a good reason to keep them around), they'll become permanent. You'll probably not want to play this in Iron Man mode.

Will Conquer For Food 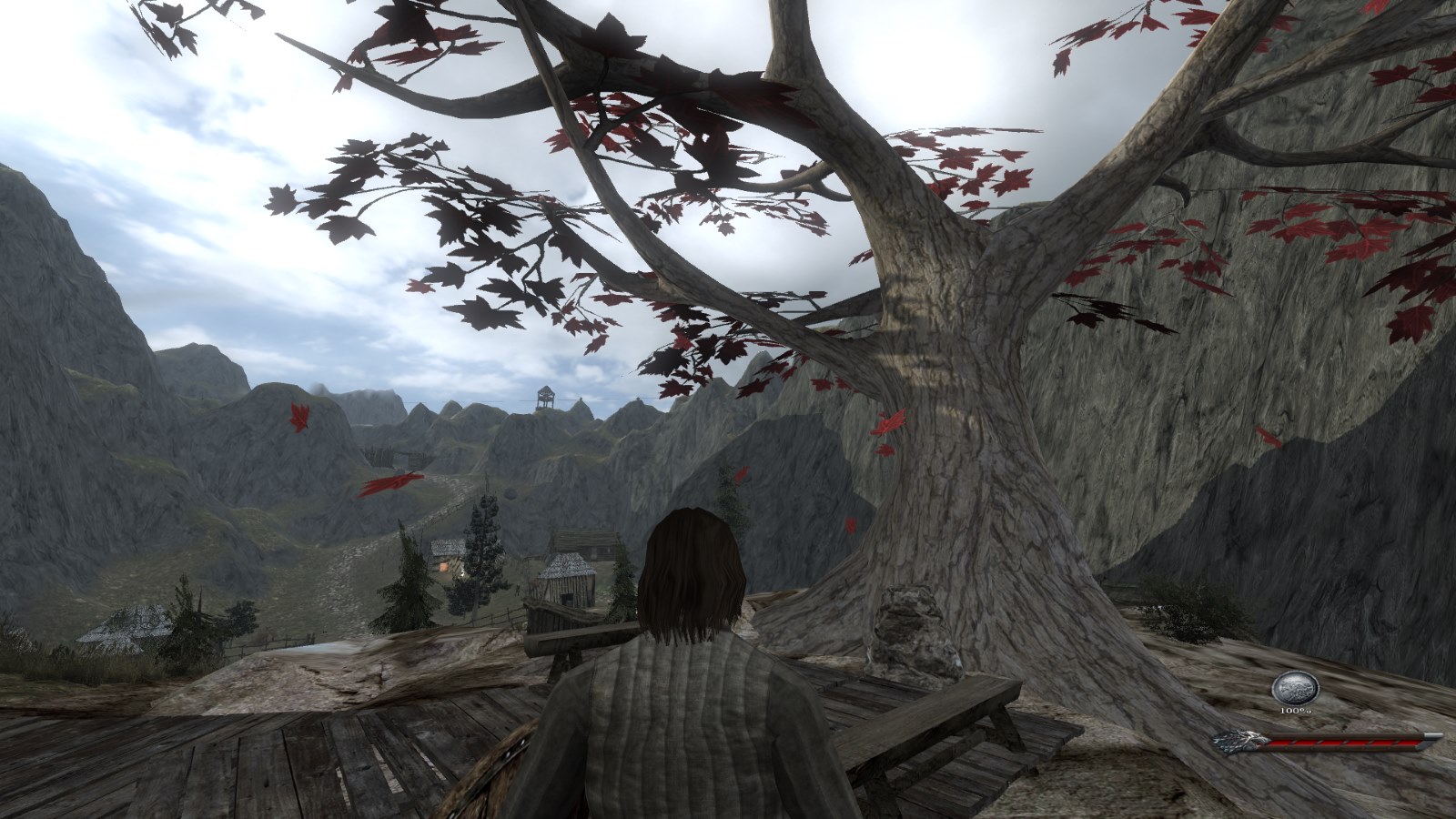 A World Of Ice And Fire does let you go off the beaten path, but by default it'll push back before long. You've got two years, give or take, until the White Walker invasion happens, with the Night King and his horde rolling in from the north. Yep, there are proper undead enemies this time round, as well as giants (recruitable, if you end up befriending the Wildling tribes), and even a Direwolf companion. If you want to fight the undead, you'll need a Valyrian weapon, or incendiaries like Wildfire flasks.

While lacking in dragons, this mod does have almost every other notable face you could think of. Head up past The Wall and you'll be able to sign up with the ever-horrible Mance Rayder. If a warmer climate is more your style, you can head across the sea and towards the Free Cities. If you feel like getting involved in scripted story quests, you can seek out Danaerys Targaryen, Varys and other members of her crew.

Keep Your Friends Close And Your Enemies Well Paid

As brutal and uncompromising as A World Of Ice & Fire can be, it all feels there to add texture to the mod. I wouldn't recommend this as anyone's first Mount & Blade mod, but I would recommend it to fans wanting to play around in the world of the TV show and novels. Keep your eyes peeled (or consult this mod wiki page) and you'll be able to hire Bronn, notorious cutthroat mercenary and most likeable person in the entire TV series.

And there you have it - two massive worlds to explore. The former a little more accessible, but less likely to give you your fix of fan-fiction action unless you're deeply invested in the geography and history of the setting. The latter is a more ambitious affair, but uncompromising in its difficulty and perhaps a little too willing to get you rubbing shoulders with big characters. Neither of them is easy, but they're the best way to explore Westeros on a budget. You won't even need a travel guide.

You can pick up Mount & Blade: Warband on Steam, Humble and GOG for £15/€20/$20. None of the DLC is required, or even particularly recommended.