If mega-scale fantasy violence is your thing, Total War: Warhammer 2 (Total Warhammer to its friends) is a grand old time, and an affordable alternative to wasting your savings on miniatures. Earlier Total War games arguably needed mods to shine, but Creative Assembly's recent output hasn't had to lean so hard on user-made expansions and refinements. Not that this has stopped players from trying. While newer Total War games don't lend themselves to wild total conversions as Medieval 2 did, Warhammer fans are an exacting bunch. Here's a look at some mod essentials for new players and a deeper dive on the two largest mods available to date. 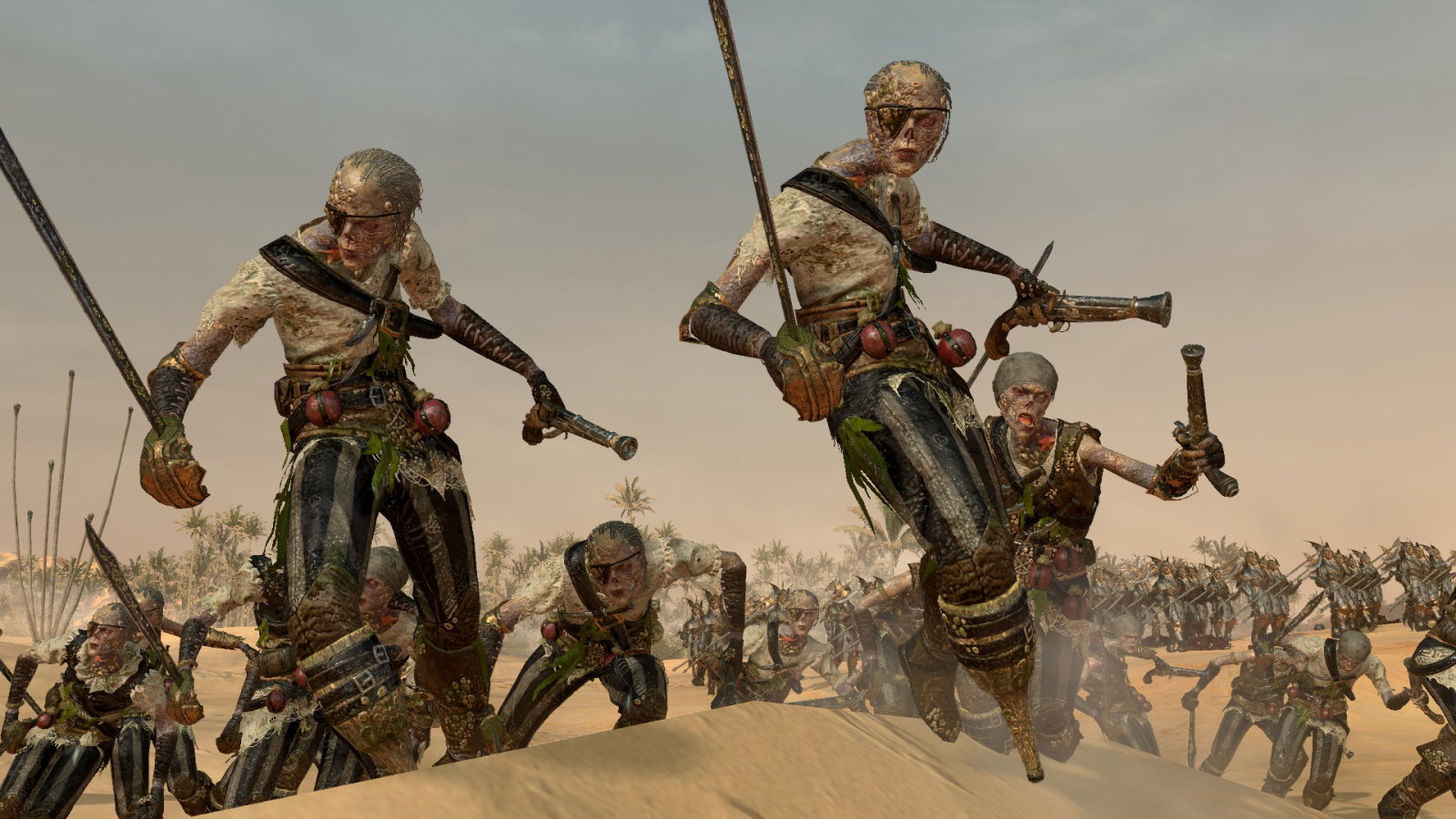 While it might not lend itself to wild total conversions as well as earlier Total War games, Total Warhammer 2 is a cakewalk to install user-made content for.  Everything is available through the Steam Workshop and downloaded with a single click. No lengthy setup guides here, although a clean install might help.

While I'll be focusing on two of the biggest Warhammer overhauls today, here's a handful of quality-of-life and graphical improvements that you should absolutely use even if you're playing the game otherwise unaltered: 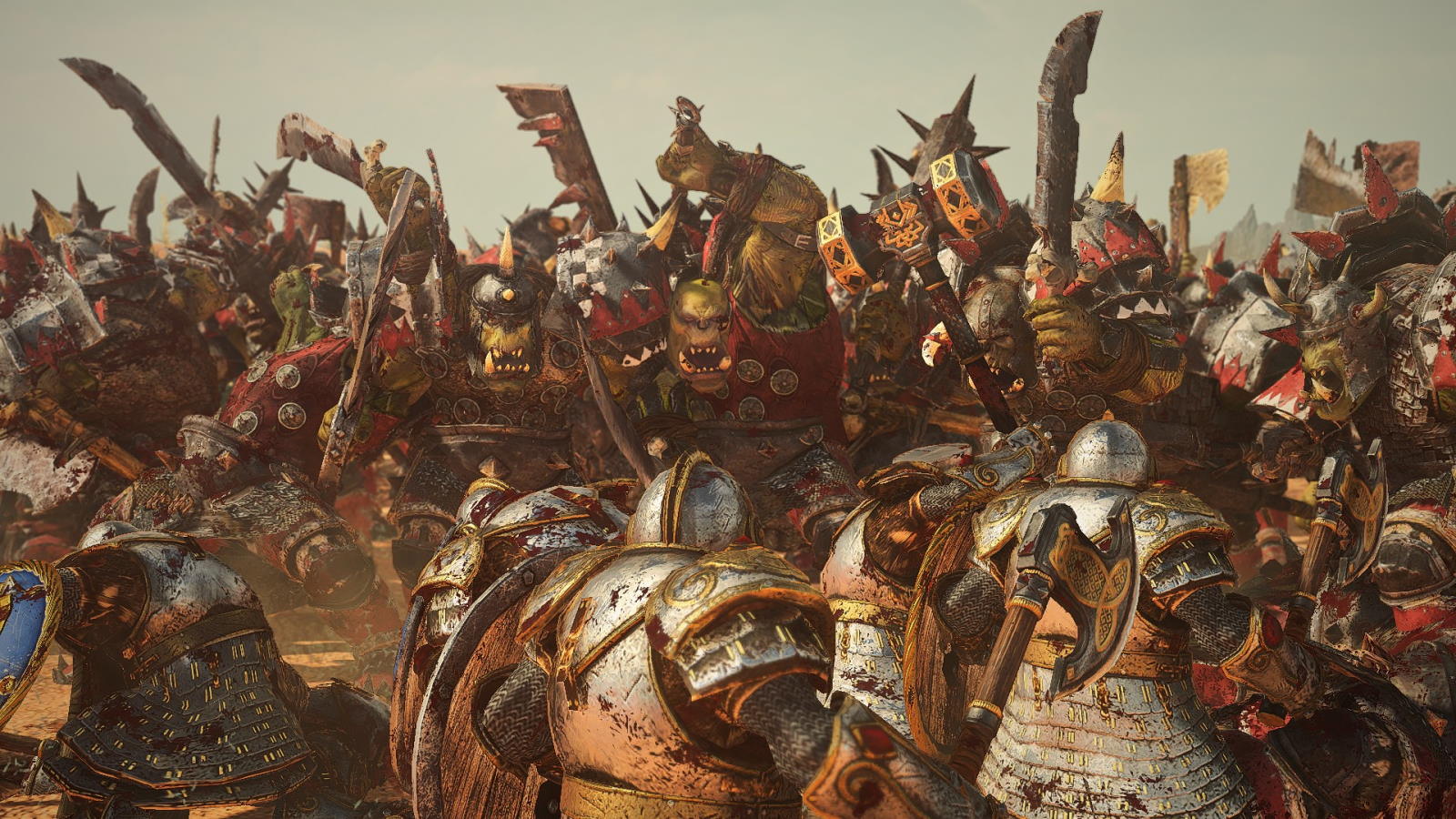 Also, while not directly modding-related, to improve performance I recommend setting Porthole Quality to '2D' in the graphics panel. This replaces animated unit portraits in battle with a static image, greatly improving performance. Also consider reducing Unit Size from Ultra to Large. While not quite as spectacular, Large unit sizes are the default in multiplayer, and explosive damage radii are tuned with it in mind. It's easier to wrangle slightly smaller regiments into position, too, and it provides a nice boost in performance at the same time.

Grimhammer: all the fun of tabletop, minus rulers

Steel Faith Overhaul: Grimhammer II has been kicking around since the first Total Warhammer and has grown into a monster for the sequel. A full-game overhaul, completely re-balancing Total Warhammer 2, it adds new units and systems to every faction with a focus on making it feel a little more Tabletop-style, a little less Total War. Combat resolves at a slower pace, and units are more specialised, forcing you to create balanced armies due to limits on rarer types. Attacking settlements also becomes an uphill struggle, as every building provides its own garrisoned force.

While playable in any mode, Grimhammer shines in the Mortal Empires mega-campaign mode, unlocked by owning the original Total Warhammer. It's also Patreon-funded, and a full-time job for its lead developer, so I fully expect to see this project continue well after the inevitable launch of Total Warhammer 3, and am excited to see what they do with the Chaos Demons when they roll out.

It's hard to summarise Grimhammer due to its sheer enormity. The total change log is a preposterous 175 page (and growing) document with a section for each faction, plus explanations on the broader changes made. Broadly speaking, it makes every faction distinct and complex to play, and gives Mortal Empires players more faction goals than just steamrolling their neighbours. 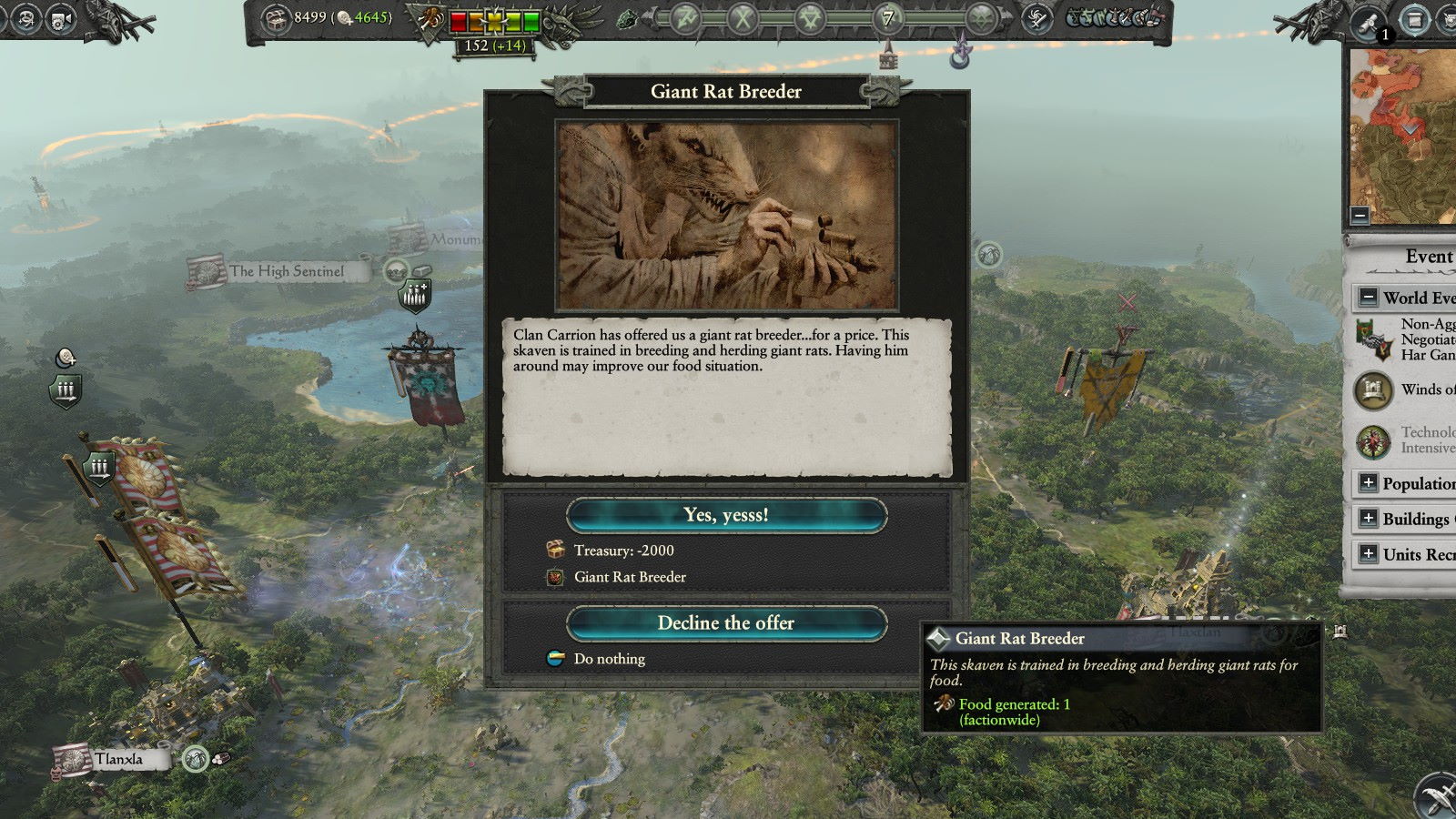 Grimhammer has eleven other mods built in and listed on its Workshop page. The Skaven by "Zarkis" is a particular favourite, giving the jabbering rat-swarm a lot more to do in Mortal Empires mode. The rats (whether player or AI) have a small chance of silently taking over any ruined settlement on the map. The mod also adds a number of ratty dilemmas, events and scripted battles that can now occur for both Skaven players and those that oppose them, making them an ever-present threat.

Other mods from the same author do similar things to bulk up the Wood Elves, Beastmen and The Empire. All of these can be installed independently of Grimhammer if you don't want to turn your game completely upside-down, but are all included as part of the package. Also included is Wulfrik: Wanderer of The Sea, which re-imagines his Norscan faction as proper (see 'historically inaccurate') viking raiders with a whole range of naval-focused upgrades. A great reason to revisit a largely-overlooked DLC faction, and typical of the mod, which makes every faction both fun to play as and against. 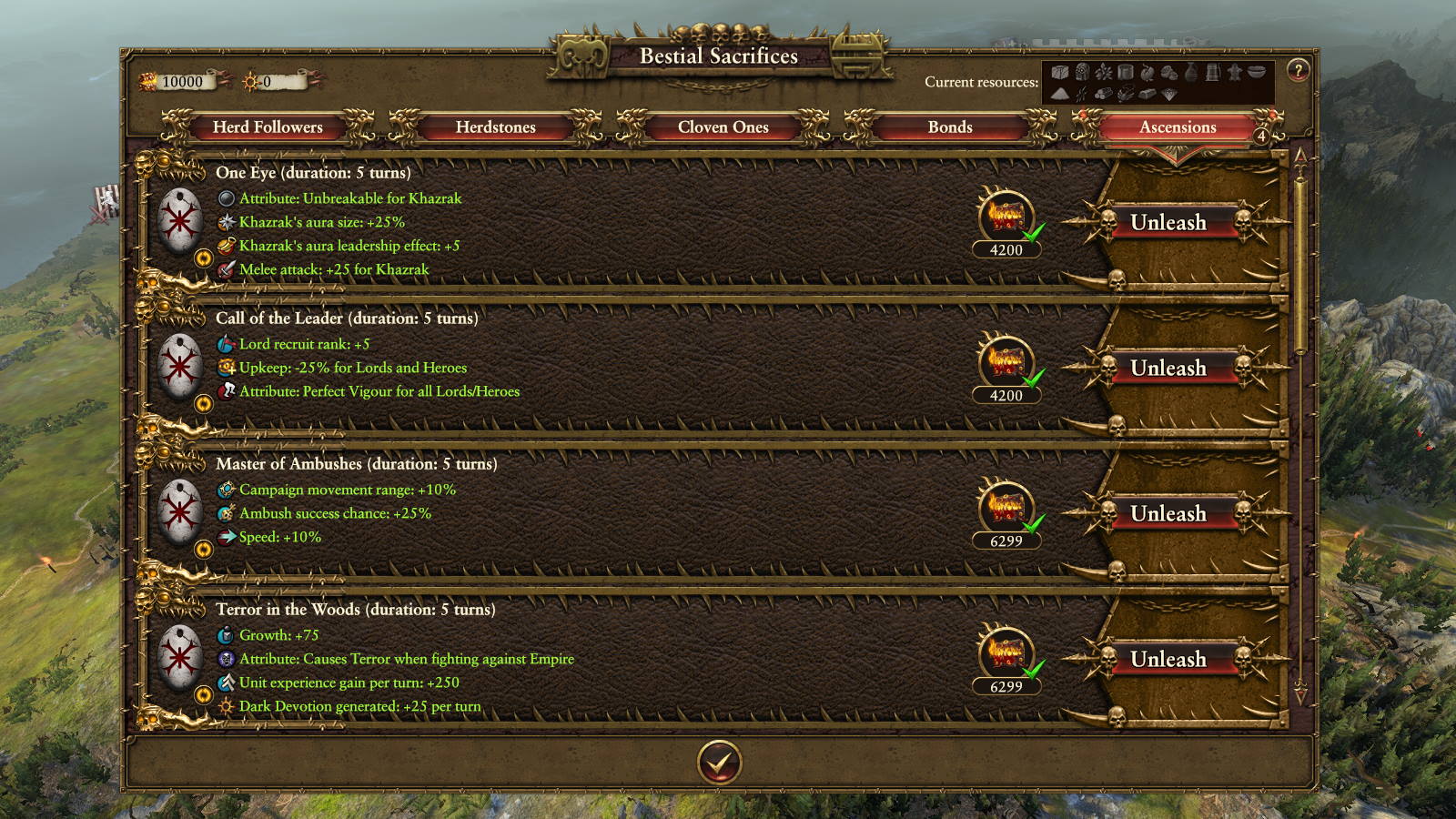 Case in point are the Beastmen, who saw a lot of love in the recently-released Blood Grounds update. Recruiting units now costs a fraction of what it did, freeing up money to spend on the new Bestial Sacrifices system. Doing naughty chaos things (like building cursed altars on the ruins on towns you just burnt down) earns you Dark Devotion, a new currency. You can spend your EvilBucks on unlocking new units, buffing your entire faction or summoning special heavy units.

Every other faction got some tweaks in the update too, and you can see the full patch-log here on Google Docs. One of the bolder changes this update is a sweeping rework to how difficulty levels behave. No longer does the AI get any bonuses; you do. On easier difficulties you get a significant boost to your economy, research rate and public order. At higher settings, you're much closer in line with the AI, which is not only smarter, but now regards the player as just another faction, instead of the one to make a beeline for.

And if all this wasn't impressive enough, here's an official list of compatible sub-mods to pick and choose from, although you're likely to just crash the game if you grab all of them at once.

Radious Mod: some orcs want to see the world burn

While I swear by it, SFO/Grimhammer is a surprisingly restrained mod. Many regiments are smaller in scale than the vanilla game, and the army composition rules can feel a bit limiting. If you want to cut loose, the Radious Total War mod (you'll also need Part 2 here) might be the cure for what ails you. While it claims to be lore-authentic, tackling similar subject matter to Grimhammer, it's a little less interested in telling you what you can and can't do. Instead, it gives you a huge roster of unit types to pick from, and encourages you to build earthshaking armies.

A few of Radious Mod's wilder features are tucked away as optional downloads, listed here on the Workshop. It says a lot that one of the official options is a big honking 40% increase to army upkeep costs to try and keep both the player and the AI a little bit more in check. Or you can pull the wish-fulfilment lever in the other direction and have lords gain four skill points with every level, quickly turning whatever campaign you play into a clash of the titans. 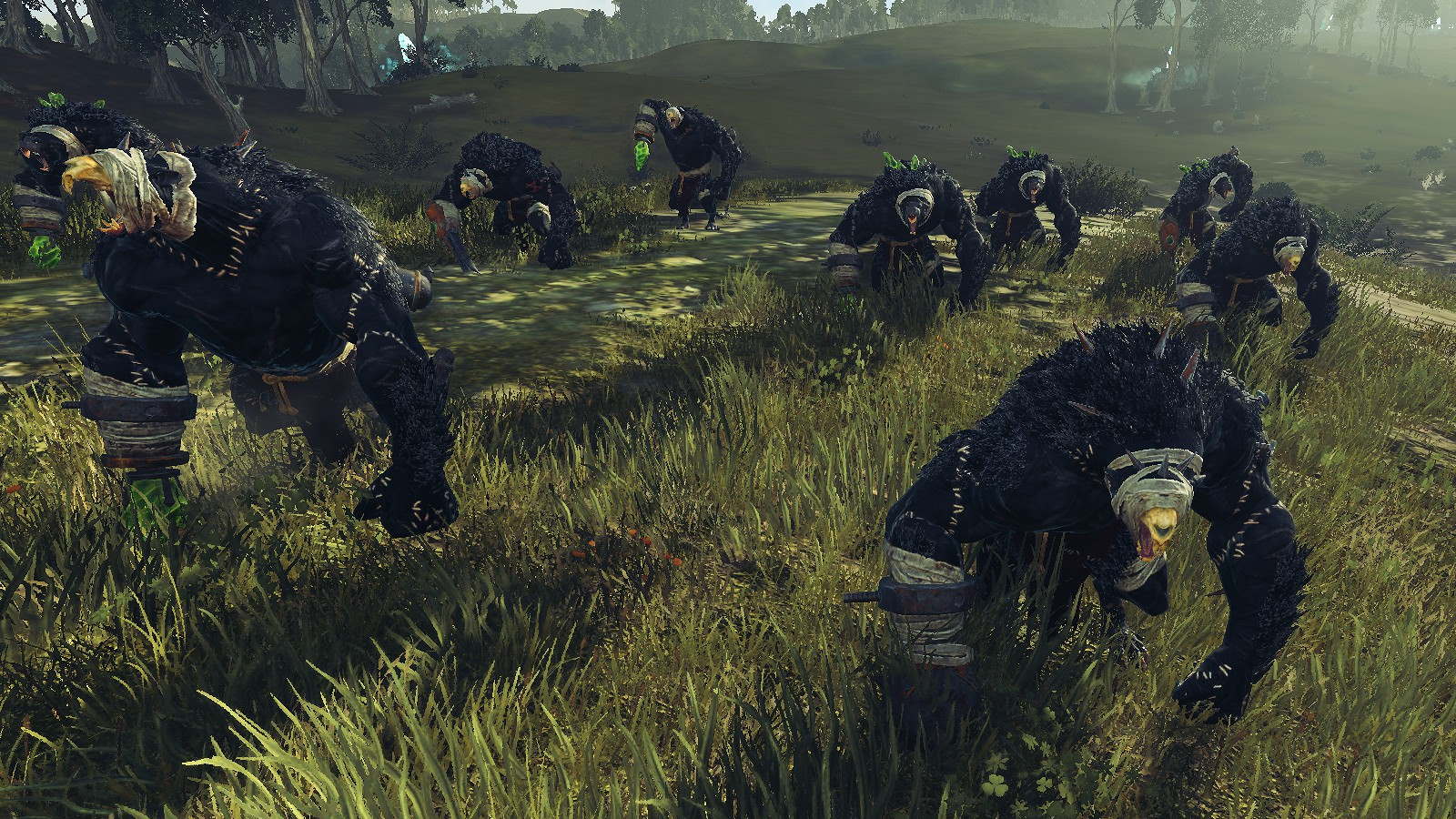 Essentially, it leans further into the Total War side of the formula, rather than SFO's love of all things Warhammer fantasy, and is geared towards enormous slugfests between armies of thousands. While there's some clever new faction features (similar to Grimhammer) to help differentiate the factions, the extra units filling so many gaps homogenises things a little bit. Skaven are still more of a swarming faction than, say, Dwarves,  but they can still go toe-to-toe for a while. Whether you consider that a strength or weakness should tell you which of the two overhaul mods you'll prefer.

As with its counterpart, the Radious project is Patreon-funded, along with several other similar projects for other Total War games. With talk on the Patreon page of the crew diving into Troy: A Total War Saga at launch, I wonder if Grimhammer is still going to have its erstwhile rival when the next Total Warhammer rolls out. I've got my fingers crossed that competition stays strong.

There are thousands upon thousands of mods for Total Warhammer 2 now, many designed to be assembled into exciting personalised cocktails of features. Which ones make up your poison of choice?