MoonQuest was definitely lying to me. It assured me that what I was looking at was a horse, but I’ve seen a few horses before and I’m pretty sure none of them looked like alien llama-giraffe-monsters. The name tag hung there, daring me to question it. OK, I thought, I’ll suspend my disbelief. I jumped on the supposed horse, wondering if I might be able to ride it. Instead I gently bounced on its back a couple of times and then tumbled off. It didn’t mind. Completely by accident I walloped it with my mallet, and the horse was no more. Picking up the hide from its corpse, I finally realised what the horse really was: more fuel for yet another large and slightly boring crafting system.

A giant talking nautilus sent me off to look for a MacGuffin to fix the broken moon, but as is so often the case with quests these days, a rather large part of that is delving into crafting menus and hunting down materials. I needed gold and iron and pelts and thread and food and mechanical components and wood and… lots of other things. They were required for the usual suspects: armour, weapons, potions and, finally, building pieces that I’d only ever use to make stairs. 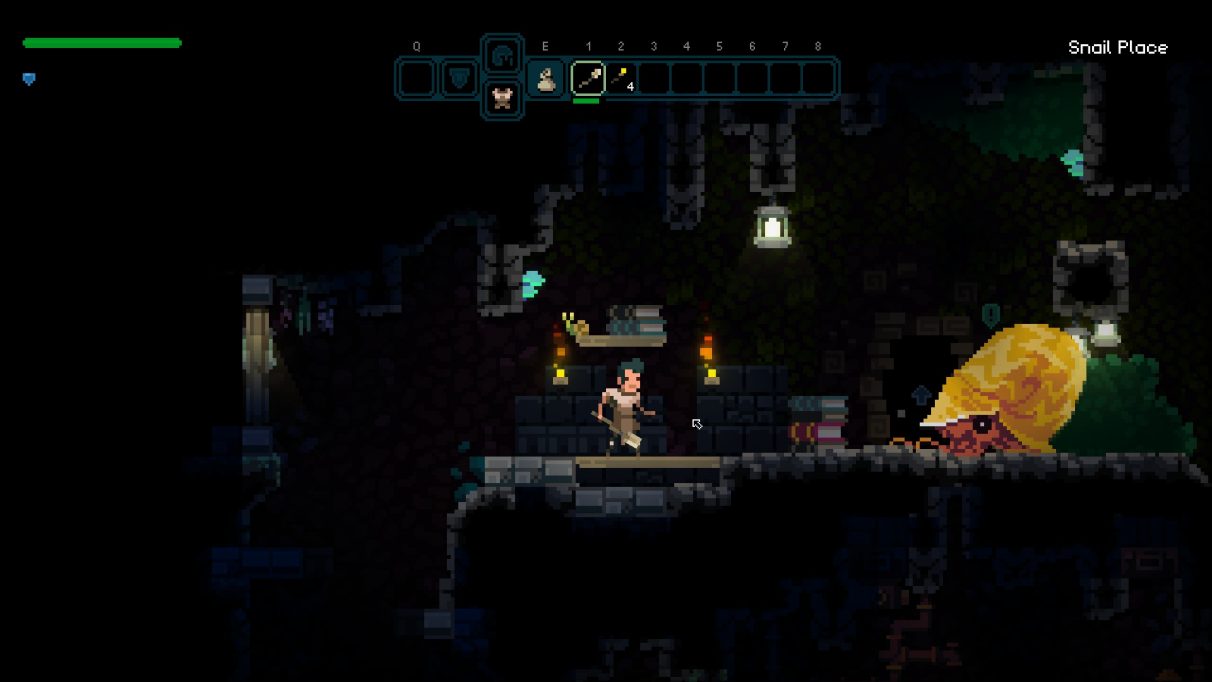 The lively alien world, brought to life by some very handsome pixel art, invites exploration; bounding around and underneath it, I liked to think of myself as a heavily-armed xenologist, cataloguing the world’s bizarre menagerie. Really, it was just a side gig. My main job was digging through caves to find mountains of ore for my giant shopping list. I can confidently say that I’d be pretty content with never mining again. I’ve definitely filled whatever need I may have once had to endlessly chip away at rocks for little chunks of ore. MoonQuest is at least generous; it feels a little less like busywork when a few taps gets you most of what you need for some basic equipment. Ultimately mining and crafting will still take up most of your time, however, and it’s where MoonQuest is at its most conventional.

Six years ago it might have seemed bolder. That’s when development kicked off, only a year after Minecraft’s official launch. Terraria was still fresh, Starbound didn’t exist and the tide of Minecraftbuts hadn’t quite drowned the world yet. MoonQuest’s twist is its fleeting world: when your character finally croaks after five deaths, the world croaks with it. 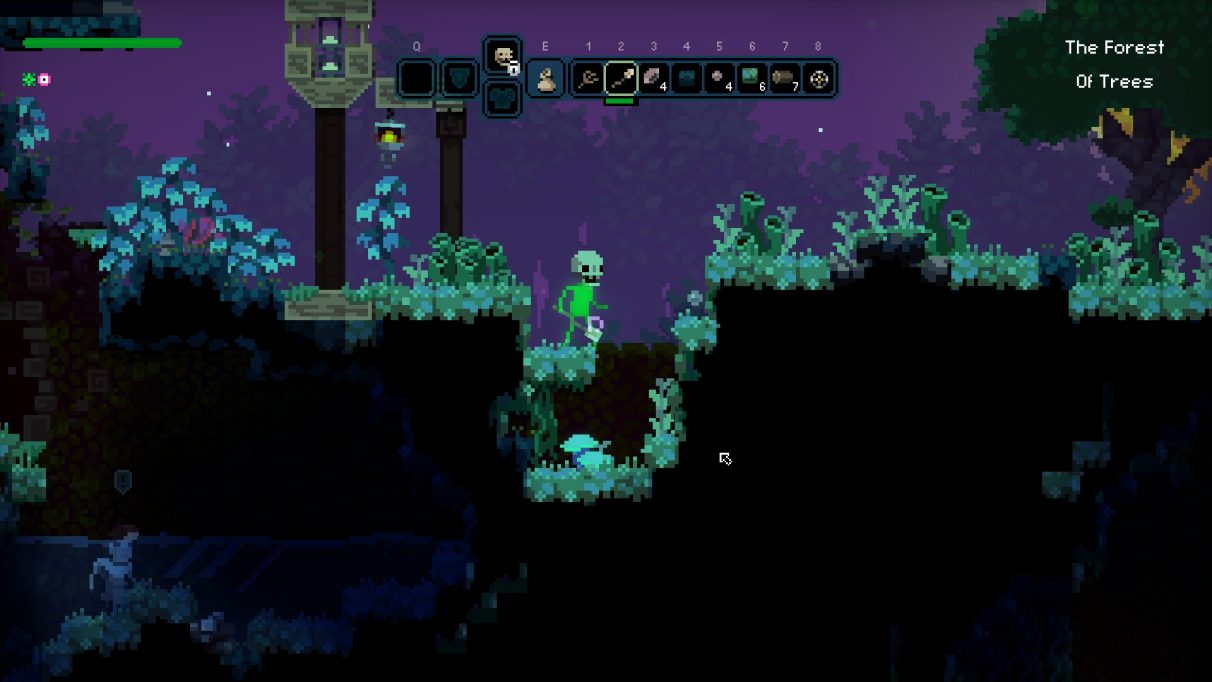 Everything is reforged, though parts may looks very similar, making the inclusion of construction a surprise. You can deconstruct NPC buildings and use them to make your own, or you can just craft what you need from NPCs or stations, netting yourself doors, windows, walls - you know the drill. But death will destroy everything you make. Hours of work down the tube. There’s not much impetus to build, either, beyond wanting to create some monument to your greatness. OK, that’s a great reason, but it’s probably not something you’ll be inspired to do more than once.

Premature Evaluation is the weekly column in which we explore the wilds of early access. This week, Fraser’s investigating alien horses and collecting huge amounts of ore, probably too much ore, in crafty roguelike MoonQuest.

Death’s obviously a bit of a hassle, but otherwise MoonQuest is uncharacteristically convenient for a roguelike. There are teleporters everywhere, you’ll always be able to find crafting NPCs, even inside dungeons, and healing items are similarly all over the place. Even great roguelikes occasionally conflate challenge with inconvenience or mean-spiritedness, but aside from being extremely close-lipped, MoonQuest feels like it’s on your side.

The world is split up into around 20 areas connected via signposts and teleporters. The move from open world to seperate maps proves to be one of MoonQuest’s smartest ideas.
Rather than digging through miles of dirt to find adventure, you walk through a door and into a dungeon. Each map is a discrete level, often distinct in tone, with creatures and challenges that you might not see in its neighbours. There’s no wasting time trying to reach an end that doesn’t exist. There’s a big ol’ invisible wall at the edge of the screen, and if there’s no signpost next to it, you ain’t going any further. The limitations are liberating. 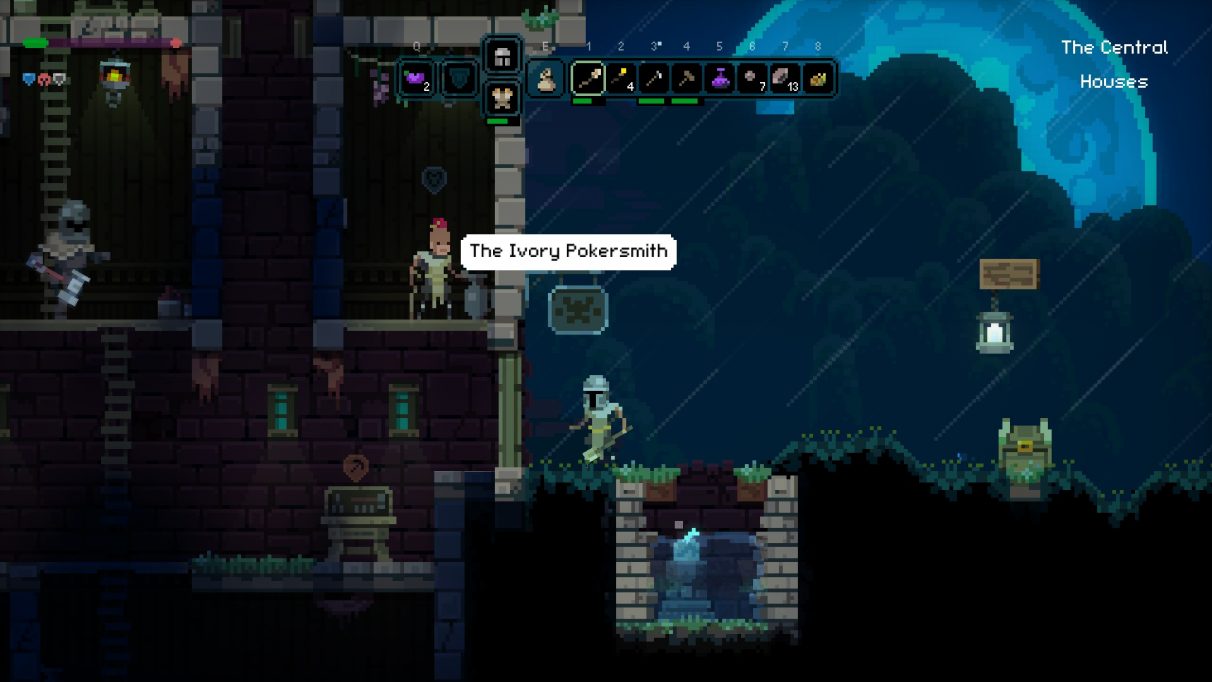 None of this is to say that you’re guaranteed to see it all before you take a nosedive off this mortal plane. You should expect to die plenty of times before making a successful run - something I haven’t done yet. Dungeons are full of traps and powerful enemies, and while you might enter them confident in your ability and gear, all it takes is for your torch to go out or your weapon to break and you’ll be in a precarious situation, fighting in the dark or without a way to defend yourself. Or you might just end up being the victim of random misfortune. It’s in those instances when the five lives are really appreciated.

Some enemies will rush at you and then leap at your face, others will fight more defensively, keeping their shields up and waiting for you to strike. Occasionally you’ll come across creatures that will just ignore you entirely unless you get too close. They’ve not just got different abilities; they have different behaviours. It would be great if it developed into an ecosystem, with the animals and monsters interacting with each other or competing. And obviously we should be able to ride the weird horse-things. I won’t be happy until I can charge into battle, riding by dumb llama-giraffe-monster and brandishing an axe. 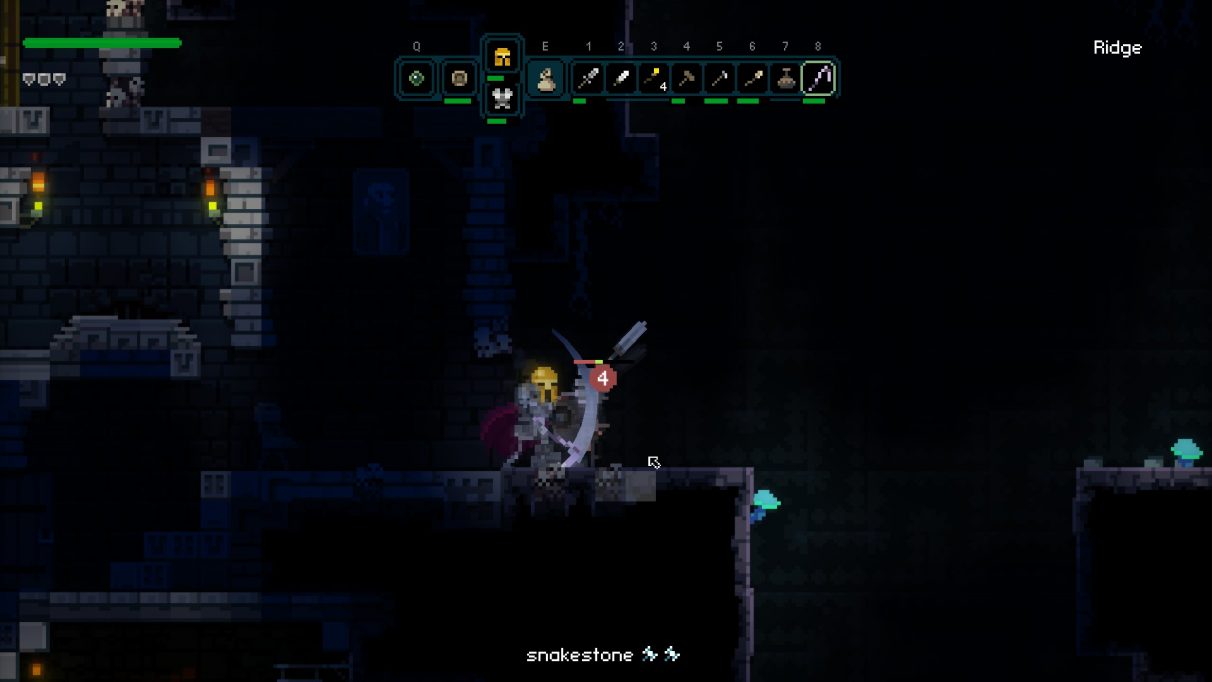 The most exotic instrument of death I’ve found is a scythe, which probably wouldn’t be exotic at all if I was a farmer (or Death) and while some weapons are enchanted, these enchantments are subtle. I picked up a frost knife, expecting something rather dramatic, but all it did was knock enemies back by like a pixel. They’re not as flashy as one might expect from the alien-fantasy setting. I’ve noticed some magical staffs in screenshots, and there’s a Gandalf analogue - one of several unlockable characters - who undoubtedly has some magical abilities, but I’ve not seen anything like that yet. Fights remain a high point, nonetheless.

I’ve soured on the loose, messy, flailing combat that’s normally found in 2D crafting sandboxes, and it’s not to be found in MoonQuest. Instead, scraps are simple and tight, with excellent hit detection, deliberate strikes, and enemies that can’t damage you just by touching you. When there is chaos, it’s more controlled, like rerouting a river of lava. It’s less "I have no flipping idea what is going on" and more "I have created this mess and I am proud of it". There’s a meaningful difference between the various types of weapons too, though the vague item descriptions create problems. The only way to know if your new weapon is stronger than your old one is by using them both to kill the same enemy and checking the tiny damage numbers that float above them. 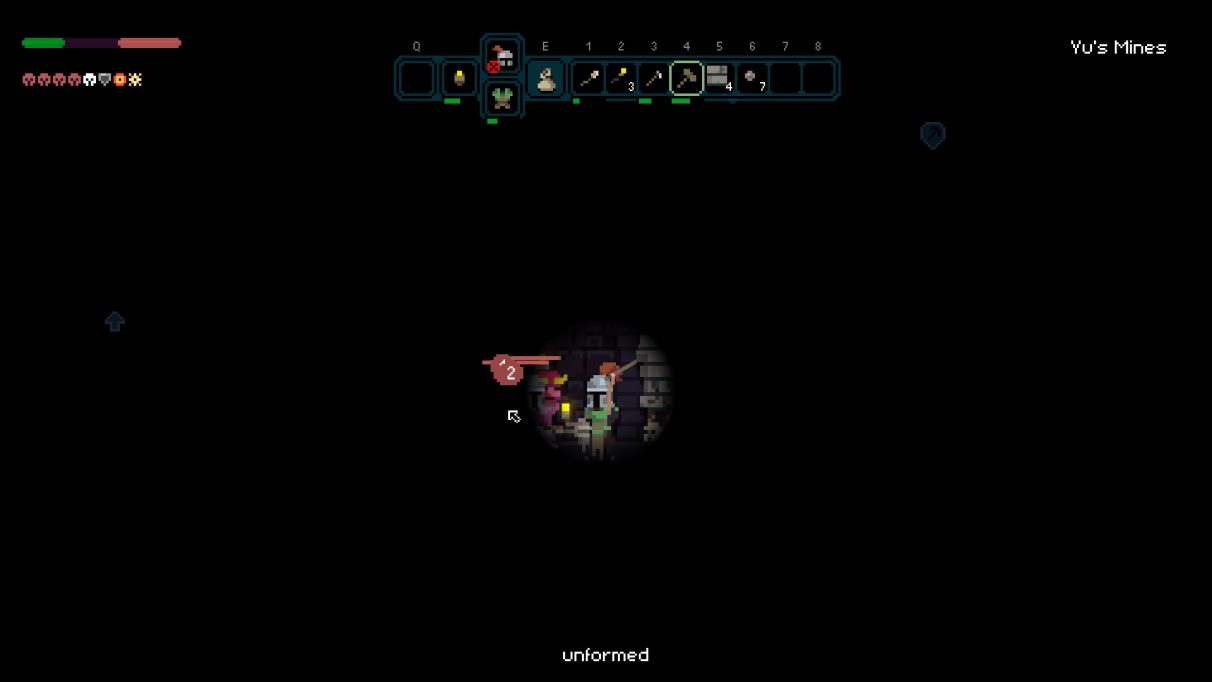 Within those dungeons, construction is also given some purpose. You won’t be needing doors, windows and fences, but anything that lets you trap enemies or build escape routes up walls and cliffs is extremely handy. I’m less likely to mourn a makeshift ladder when I die than a palatial holiday home.

In my last run, I was so close to repairing the moon that I could taste it. I’d put together a compass that directed me towards doors, and I was certain that it would guide me to my magical moonstone. But my armour was broken, and I needed, yes, more ore. This would be the last time I’d dig for ore this week, I promised myself. I caught a glimpse of a mining spot and made towards it, wandering right into a trap. I slipped through a hard-to-spot gap in the floor and right into an underground, waterlogged chamber. I had none of what I needed to escape, and I drowned. It was my last life. I refused to be beaten, though. I’d unlocked a new character, my winning character. I checked to see what the Elemental’s special ability was. 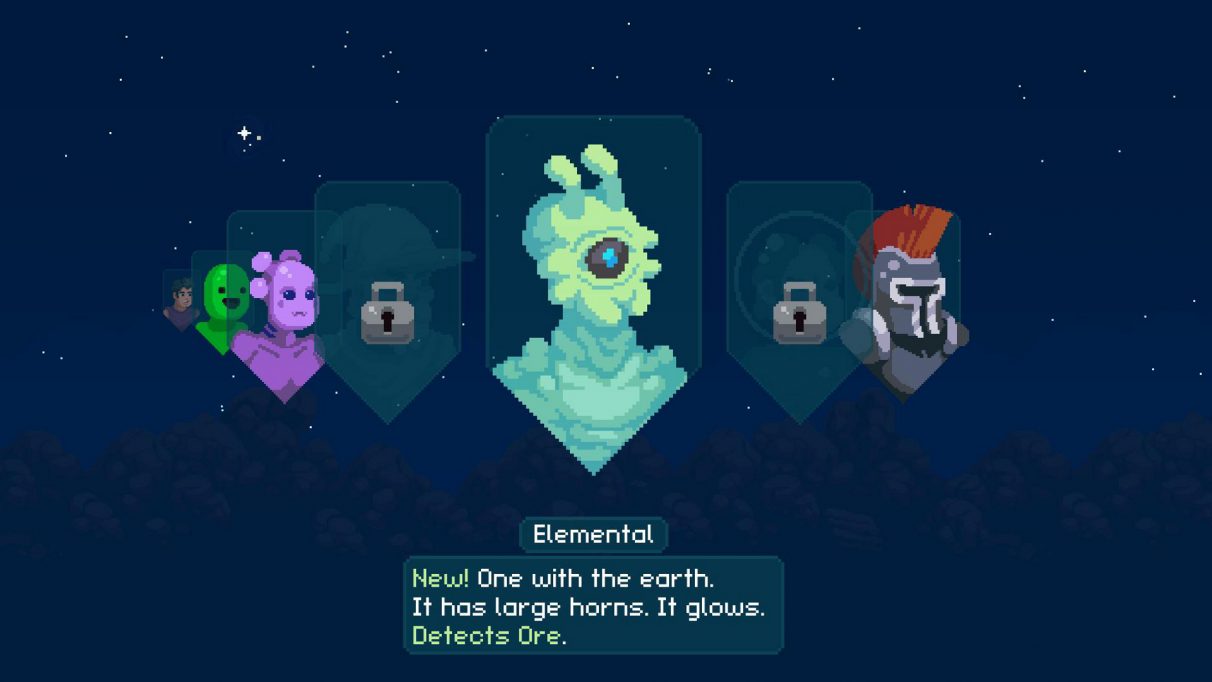 And I was done.