My Hero One's Justice does not have a very good name, I'll be the first to admit, but neither did My Hero Academia, the excellent manga/anime series that this now-PC-bound superhero fighting game is based on. Don't let wonky naming put you off either, because superheroes knocking seven bells out of each other (and the surrounding environment) will always be fun.

If you've somehow managed to avoid all nerd media this past year, a crash course: My Hero Academia is a massively successful teen superhero manga/anime series about a New Mutants style class of crime-fighters in training. Despite its Japanese origins, it's a huge love-letter to the entire American superhero genre, packed with references both subtle and overt.

The series mostly follows the rise of Izuku 'Deku' Midoriya, a non-powered kid with dreams of becoming a hero. He's taken under the wing of All Might (a hulking great American-flag-themed celebrity superhero who's a bit like a blend of Superman and The Tick) and quickly ends up enrolled in a prestigious hero academy. While the gameplay footage thusfar doesn't contain much in the way of story, it seems safe to assume that it'll roughly follow the first two seasons of the anime series, given the characters shown.

What is clear is that this isn't your usual fighting game, ala Street Fighter or the more recently relevant Dragon Ball FighterZ. Instead, My Hero One's Justice looks a lot like the (surprisingly solid) Naruto: Ultimate Ninja Storm series, which put a focus on full 3D movement, positioning and the timing of a handful of easily-activated moves over learning complex combo strings. It fits the nature of the characters well, given their limited and slowly-expanding repertoire of moves. 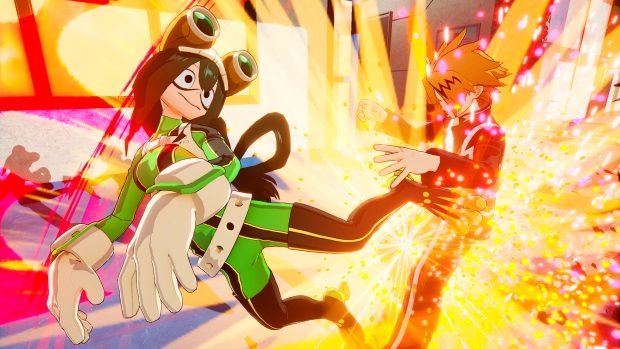 Also as in the Ultimate Ninja Storm series, you can pick two sidekick characters to back you up each fight. While not directly playable, tag-team style, you can call on them to run in and fire off a shot or combo as required. It's probably never going to be serious esports material, but the days of TV and cartoon-licensed games being almost universally rubbish are thankfully long past, and while truly great ones are still few and far between, this one looks like a fun little romp.

No date has been pinned down for My Hero One's Justice outside of the promise of a 2018 release across all major platforms, PC included. As for the series (which is essential watching for any fan of spandex and capes), you can find it on Crunchyroll, where its third season has just started.