If you click on a link and make a purchase we may receive a small commission. Read our editorial policy.
Premature Evaluation is the weekly column in which we explore the wilds of early access. This week, Fraser’s put on his (prescription) welding goggles to fix up drones in Nimbatus, a space drone construction sim.

I've been doing a lot of tinkering recently. Endless iterations of death-dealing drones, flying factories, huge robotic worms and automated weapon platforms - I've lost count of all my experiments in destruction. Nimbatus’ drone editor is a complex, liberating tool where patient engineers can craft a bewildering array of exotic, inventive machines. Then a giant snake blows them up.

When my massive artillery drone - the better part of an hour of work - was smashed to bits in less than a minute, I was less than chuffed. It was bristling with missile launchers and surrounded by shields, but it got stuck on a barely-visible piece of scenery and then blown up by the aforementioned scaley menace, who, it turns out, is invincible. I’ve become well acquainted with these setbacks, watching my glorious drones suffer inglorious ends, but I keep finding myself back in the workshop, slapping on new components and trying to figure out how the heck logic gates work. 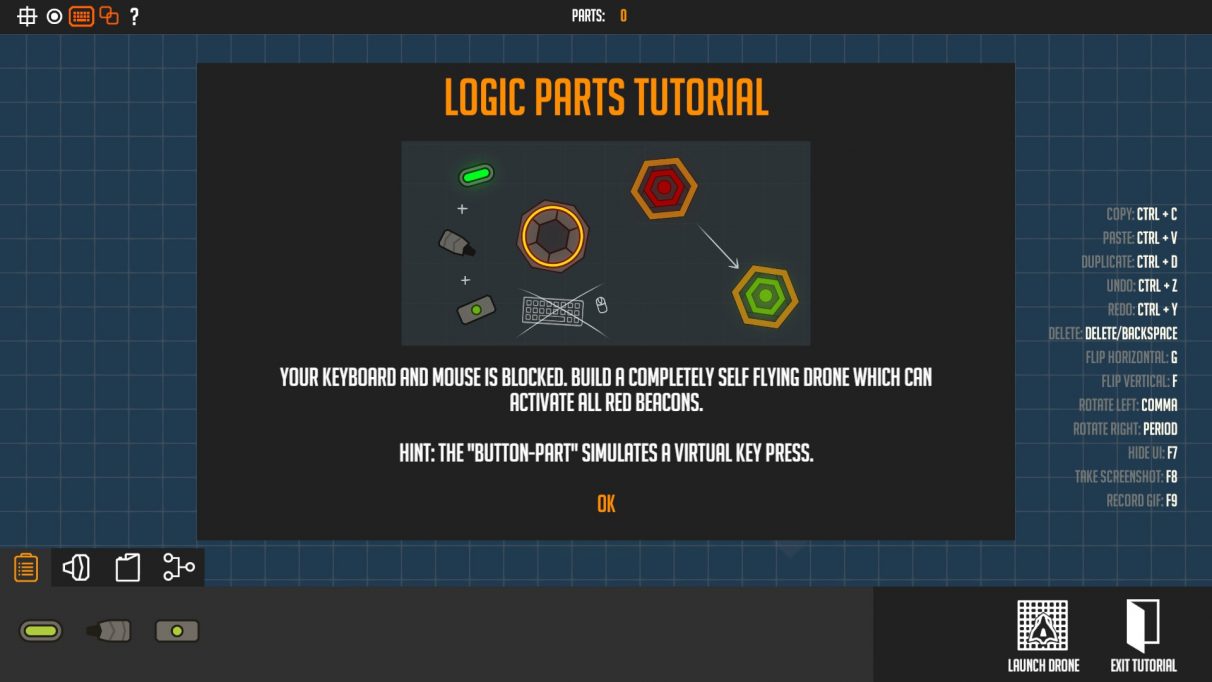 Above is the full extent of the logic tutorial, and the only in-game explanation for its most complicated system. It tells you to make an automated drone rather than teaching you, then doesn’t even mention the multitude of gates, spitters and switches that you’ll need to use to make anything more advanced.

From the moment I set foot in the procedural galaxy, I was winging it. Each galaxy is made up of several solar systems, and within them several worlds, each with its own gravity, air resistance and risk factor. The planets all have an associated objective, and by completing them you can unlock new systems and galaxies. My first job was destroying alien bug nests.

My very first drone was so flimsy it just fell apart, while the next few were all destroyed while fighting bugs. I’d go back to the drawing board and make improvements, but then new problems would appear. Every new part increased its mass, and often its energy and fuel consumption. Its size and weight also changed how it moved, so with each new version, I had to learn to pilot it all over again. 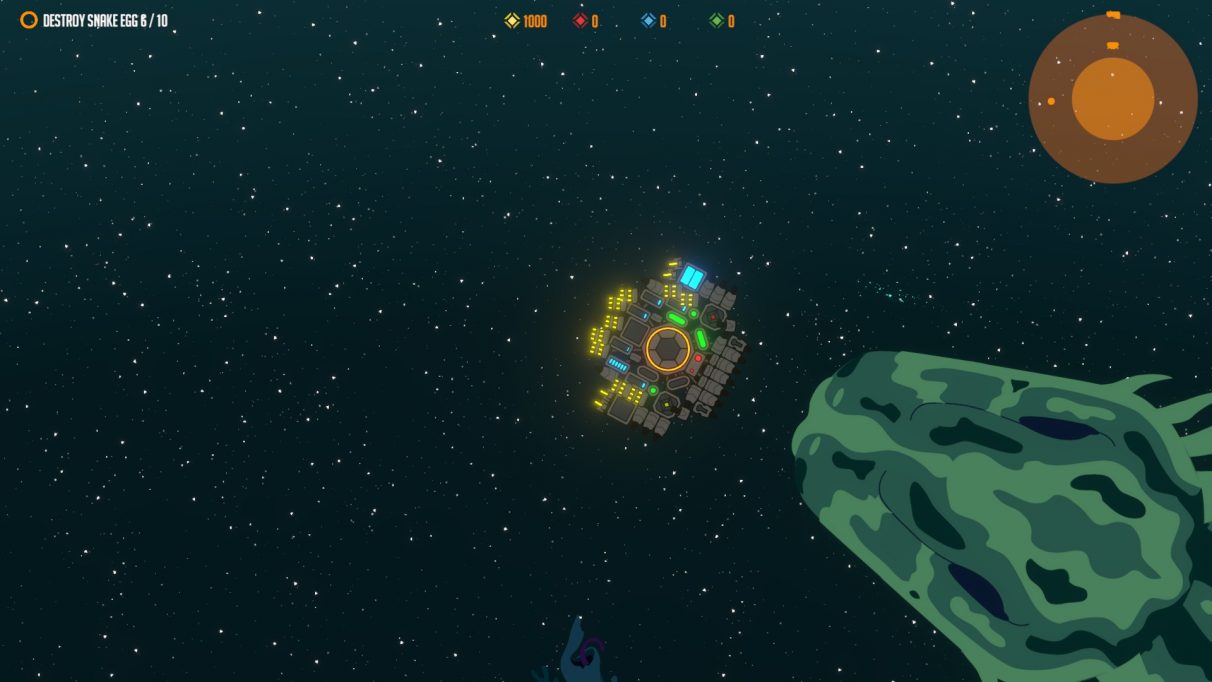 I started out with little fighters, but since then I’ve graduated to giant bomb factories, drone motherships and serpentine mining drills. Some hovered over planets, bombarding them from a distance; others tunneled through planets, their lasers and drills chewing through rock. In a lot of cases, I’ve relied on designs from the Steam Workshop for their foundations, and I would have been absolutely lost without all these much smarter drone engineers.

I haven’t really enjoyed piloting any of them. For all the fine control that I have, letting me place thrusters anywhere, choose individual keybindings, group them together and even automate them, actually flying them is a fiddly trial. The ships aren’t to blame; they’re the victim of Nimbatus’ stubborn, fixed camera and the game’s penchant for trapping drones on tiny parts of the destructible environment. Nimbatus encourages engineers to build big, but these obstacles are only exacerbated by larger drones. 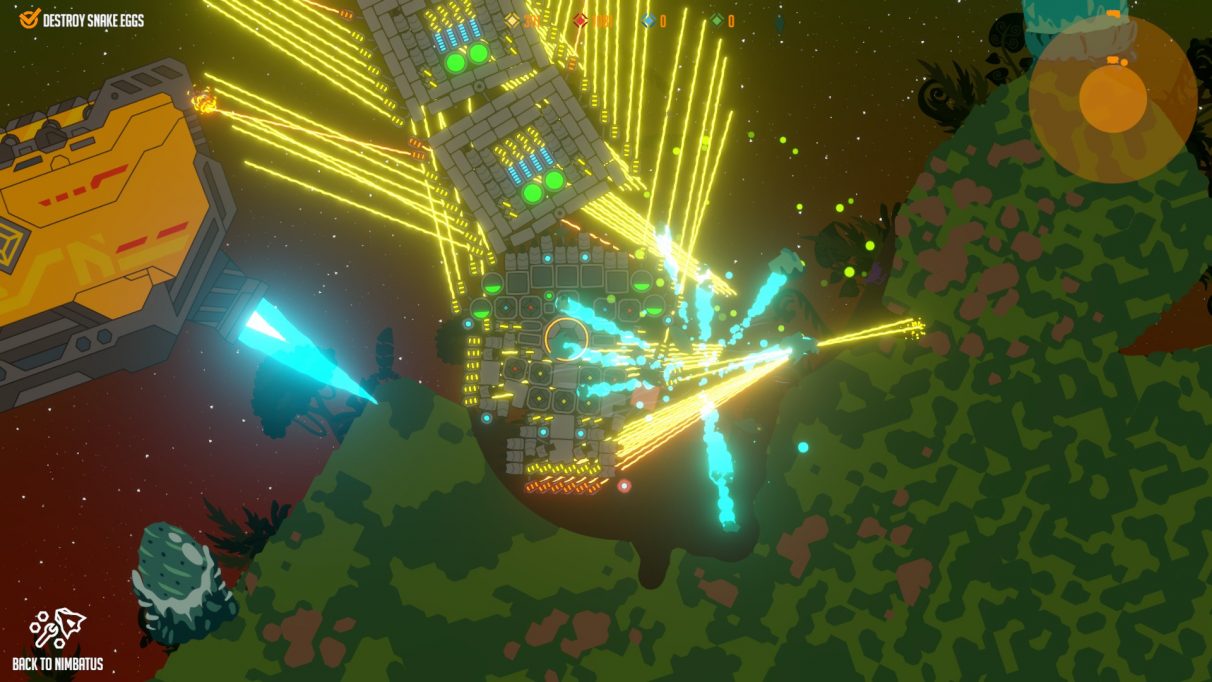 So far I’ve only come across a few types of missions, and none of them seem particularly worthy of a drone that can, let us not forget, destroy whole worlds. The transmitter mission sends you off to find and destroy a transmitter that’s sitting in plain sight. It takes about 30 seconds to explore the entire surface, and less to blow up the transmitter, so you’ll be done in less than a minute. This is actually the best mission. Another mission tasks you with destroying snake eggs, but you’re also being hunted by a giant, indestructible snake that can show up anywhere on the planet and takes up the entire screen. It’s not great!

The actual objectives are so unimportant and disconnected from the rest of the game that each planet might as well just be an aimless sandbox. They’re really just testbeds for new drones, and being forced to painstakingly pick up barrels full of chemicals or run away from an angry snake just gets in the way. They’ve become the thing I begrudgingly do when I want to put a drone through its paces or mine for resources.

Nimbatus glosses over it a bit, but gathering resources is integral to drone construction. Every world has resources that you can mine, and when you leave the world, you can turn your bounty into new and upgraded weapons. That’s how you get access to homing missiles, split lasers, reflective bullets and all sorts of tricks, though I’ve only been able to find enough resources to give my existing weapons a bit of a boost.

Missions are chores, then, but the absence of time limits means its possible to just flit around, experimenting with new builds, scouring the planet for resources and getting into random fights. And they end so quickly, there’s barely any time to miss the comforts of the drone workshop. 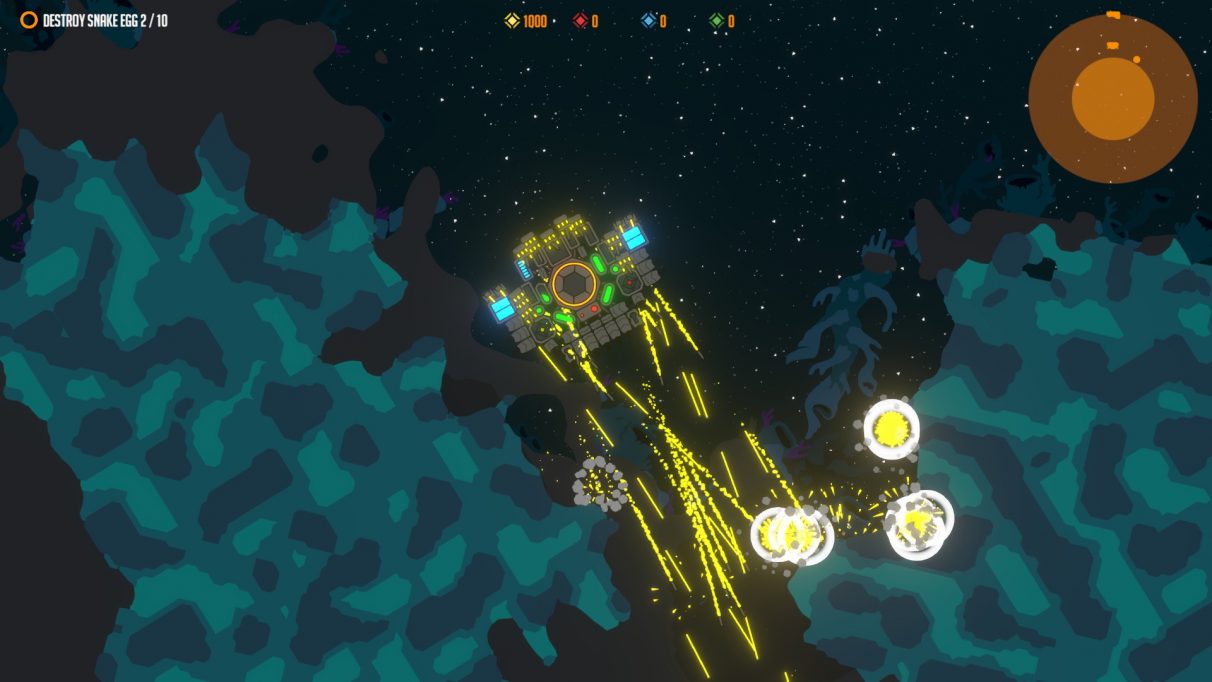 I’m much more interested in the Sumo mode, which pits drones against each other in gladiatorial combat. Alas, only automated drones can compete, and my automated drones are shit. It’s a weird barrier, but there’s always the option of downloading yet another drone from the Steam Workshop. If there was some structure to it, with proper leagues and tournaments, and maybe a manual version, then it could be enough to hang a game on. That’s what we really want to see: robots fighting for our amusement. We could probably get Dara Ó Briain to commentate.

Until then, I think I’ll be hanging up the welding goggles. The construction tools are brilliant, and only occasionally finicky, but there’s just no forward momentum. Ostensibly, I need to keep unlocking new systems, but there’s no story, rewards or challenge driving it. I’ve got to move onto the next system just because. But not today! I’m taking a stand against tyranny and putting my journey on hold.