If you click on a link and make a purchase we may receive a small commission. Read our editorial policy.
No Straight Roads review
No Straight roads would be a fun enough music-snob rhythm-action game if it was just the cool bosses, but the wonky platforming sections let it down.

No Straight Roads is a rhythm-action-platformer set in a world with a sort of Monsters Inc. meets Scott Pilgrim vibe. Vinyl City's power is generated by music, with the top artists each controlling a district as well as serving as judges on a talent show for new performers. This is all controlled by NSR, corporate overlords of Vinyl City and exclusively fans of EDM.

When your bombastic rock band Bunk Bed Junction fail to get past a live audition, you decide to take back the city one district at a time by defeating NSR's performers at their own concerts in surreal battle-of-the-bands-style boss fights. Unfortunately, Bunk Bed Junction are a bit unbearable. I can get behind fighting the man. I can't get behind fighting the man largely because you think EDM sucks and rock music is the only real music. 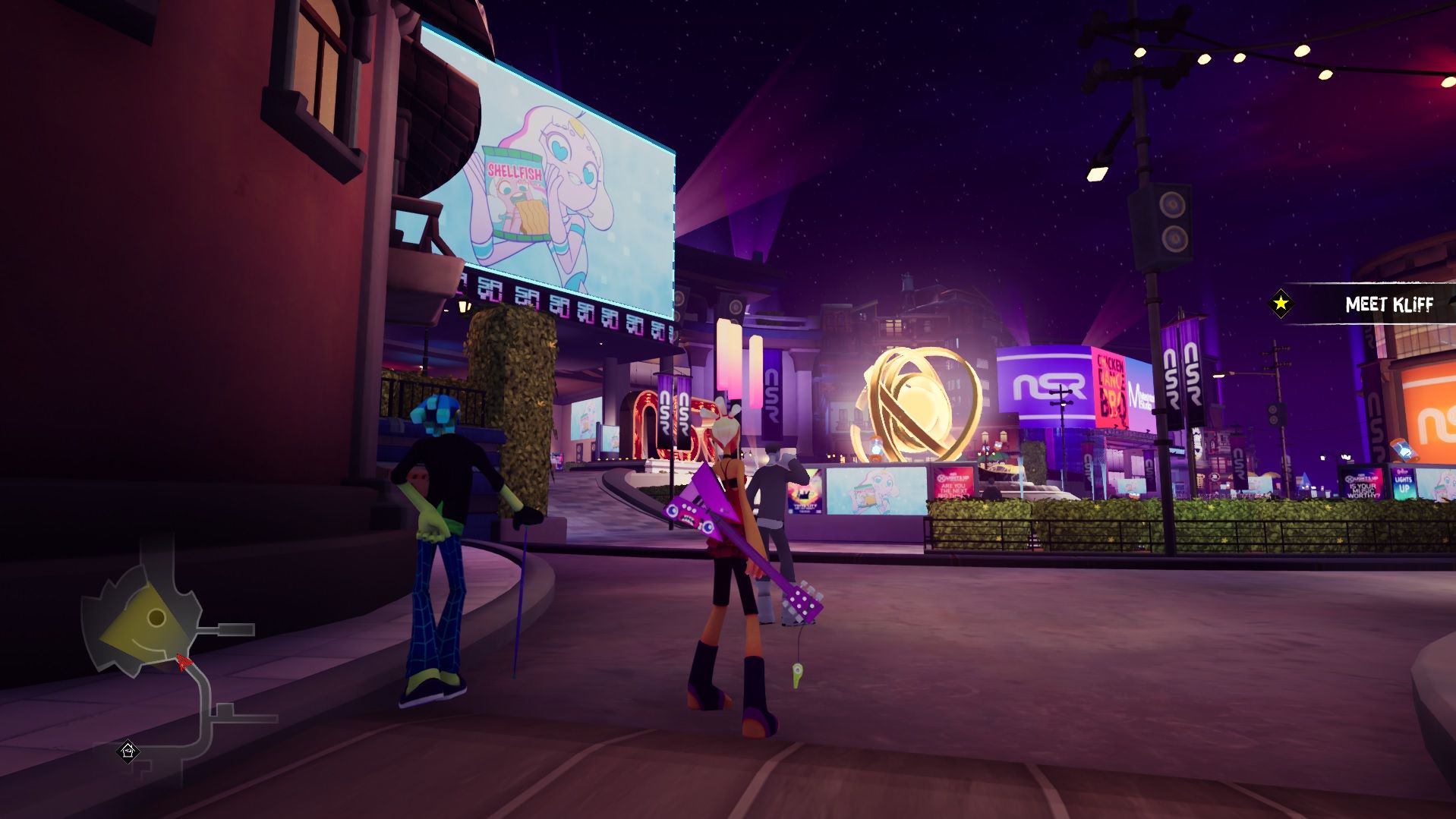 Bunk Bed Junction feel like a YouTube comment I might have left in 2010, made flesh. Pft. Kesha? I like Guns N' Roses. I was born in the wrong time. Well, past Alice, stack up Kesha and Guns N' Roses side by side in 2020 and tell me who deserves more respect now, eh? And in 2010, when Scott Pilgrim was just out and us cool nerds were congratulating each other for liking it, I probably would have appreciated Bunk Bed Junction, and their extremely Sex Bob-omb vibe of yelling "Bunka! Junka! Shaka-laka-bam!" when they win a fight.

But this is not 2010, and I am at the stage in my life where I find music elitism (already as boring and pointless as the concept of console wars) very off-putting. If people like EDM they like EDM, it's fine. Sheesh.

It's weirder because it's clear that the people who made No Straight Roads don't hate EDM, or they wouldn't have made a game where that's almost the entire soundtrack. The boss fights, which have stages that grow in complexity and strangeness, are good fun, especially when you figure out the rhythm properly and scoot about the screen avoiding attacks like second nature. My favourite was against a piano prodigy who played "neo-classical" music and was protected by a giant mother whose head and hair eventually turned into a spider.

Watch on YouTube
The right way to play
You can play NSR with a mouse and keyboard, but you definitely shouldn't. What kind of maniac plays a platformer without a controller anyway? Likewise, it is much easier and more fun playing with someone in local co-op than it is by yourself.

Bunk Bed Junction are split into the heavy hitter (Mayday, on guitar) and the quick combo attacker (Zuke, the drummer), and I enjoyed this a lot because normally games like this default to "man hit drum punch hard", but here the division actually makes musical sense. They also feel wildly different to play, and I ended up much preferring Zuke's speed and chained attacks so I could jump in and out of fights with ease.

Like other skill-based 3D platformers, you can swap special attacks in and out at will and apply all manner of buffs to suit your preferred play style. The former includes throwing your guitar around like a boomerang and turning your drumsticks into a big, chuckable trident, while the latter lets you adjust things like your speed and attack power, and you'll either find them in the little sections where you explore Vinyl City, or get them as a reward for defeating one of the bosses.

However, there's an interesting symbiotic relationship between your success as a fighter and your success as a musical double act. For instance, in order to upgrade your abilities, you need to spend fan power, and you accumulate a greater or lesser number of fans based on your performance in the boss fights. It means there's actually a point to getting a good rank in a battle rather than just bungle your way through with Es and Ds like you might in yer Devil May Crys of this world, and it encourages you to go back and try fights again so you can unlock, say, double jumps and aerial dashes, which make everything so much easier. 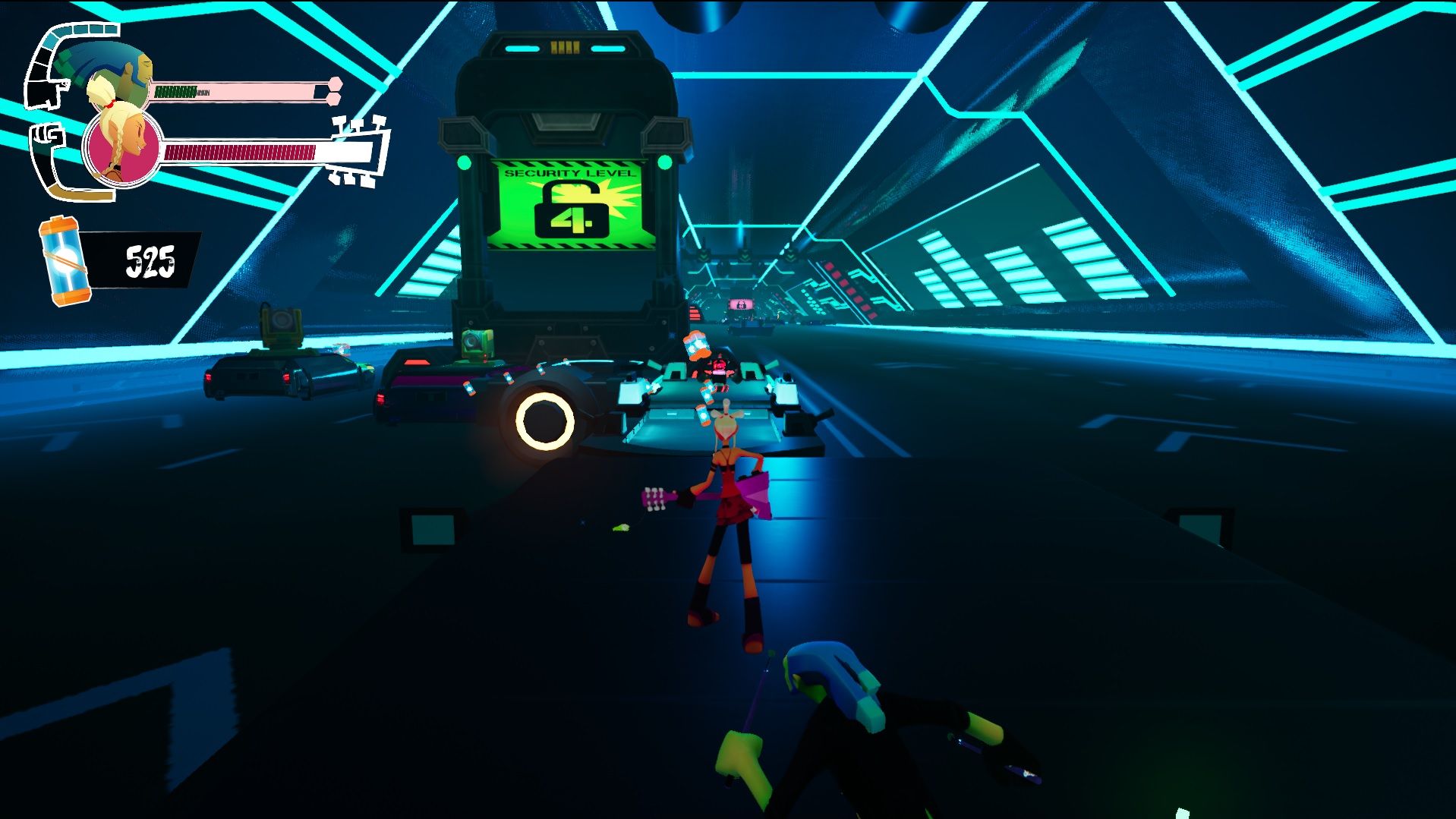 I'd be happy enough jumping about blattering a boy band made up of exquisite dancing robots, to be honest, but a more insurmountable problem No Straight Roads faces (apart from Bunk Bed Junction's extremely music-bore attitude) is its platforming sections. These precede each boss fight and are styled as getting through the musician's security team, but they quickly become exercises in extreme frustration.

The enemy mobs in these sections have beat-matched attacks like the bosses, but they aren't synced as strongly to the backing music, so you end up straining your eyes to watch their telegraphing rather than your ears. Your floaty jumps make the platforming bit infuriating to time, too, although this becomes less of a problem when you're leaping over timed boss attacks on a flat plain and need to hang in the air a little. 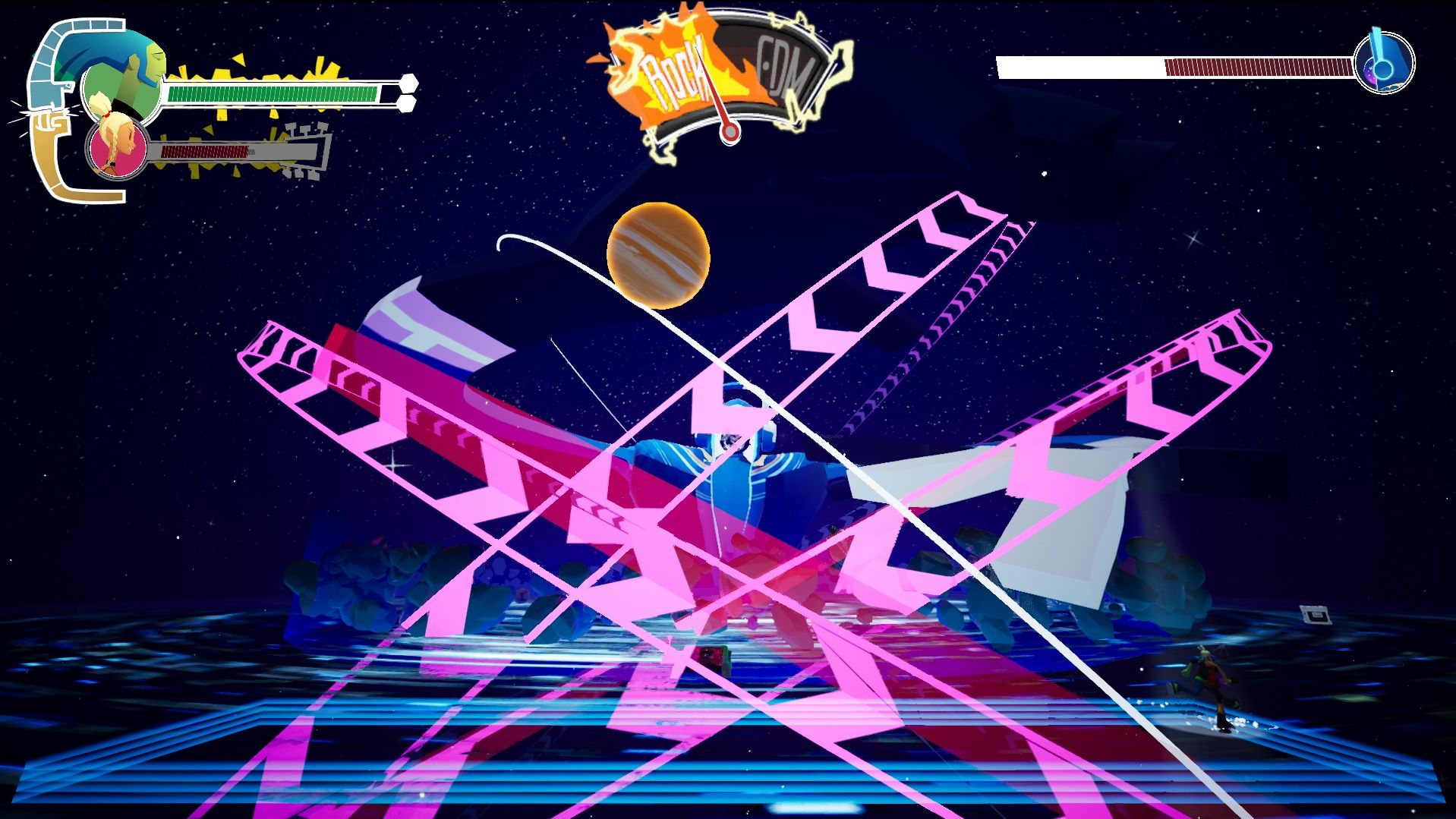 Worst of all, the camera is fixed, so fighting multiple enemies across moving platforms (which also have moving traps) mean your own clumsy leaping about frequently does more harm to you than any baddies. Sometimes you have to backtrack through an area containing these hazards, with the camera still fixed behind you. This is quite annoying.

Thanks to these sections, No Straight Roads feels like a less good version of Sayonara Wild Hearts, and if you want a rhythm action game I can't really recommend the former over the latter. I would have much preferred that NSR didn't have the platforming sections and put in another wacky boss fight instead, because they're funny, weird and pretty, and have better music.

And while we're at it, there should also be a section where someone tells Bunk Bed Junction that, in the boss fight with the young prodigy I mentioned earlier, what actually happened is that they booed a nine-year-old child and then smashed their piano. Who's the real bad guy in that situation, huh?