It's been over a year since Sharkbomb Studio's rad-looking card-based roguelike Nowhere Prophet last made camp at the RPS Treehouse, but since then the game has disappeared from its early access pilgrimage on Itch and set its ever-expanding caravan towards a full release later this summer. Based on a recent build I played at PAX East recently, I'd say it's shaping up to be one hell of a trip.

In case you missed Adam's Nowhere Prophet preview last year, this is an open deck builder where the members of your caravan are the cards you play across two-to-four-lane battlefields as you lead them toward a fabled land known rather ominously as 'The Crypt' - the last peaceful stronghold on your home planet of Soma. Yes, there are probably 'metaphors' aplenty ahead with a name like that for your final destination, but even after my brief time with the game it's clear there's a lot more to this post-apocalyptic sci-fi world than meets the eye.

On the surface, its card battles are part Thronebreaker: The Witcher Tales, part The Banner Saga and part Hearthstone, but look a little deeper and there are also hints of FTL and 80 Days here, too, thanks to the text-based story chunks you encounter as you plot your way across its procedurally-generated desertscape. It's a heady mix, but one that feels all its own thanks to its striking visuals - something publisher No More Robots is coining as 'Indian-infused dustpunk' - and compelling, tactical combat. After all, these cards aren't just bits of paper with nifty-sounding attacks on them. They're the people who make up your caravan, and if they're defeated in battle you run the risk of losing them altogether. 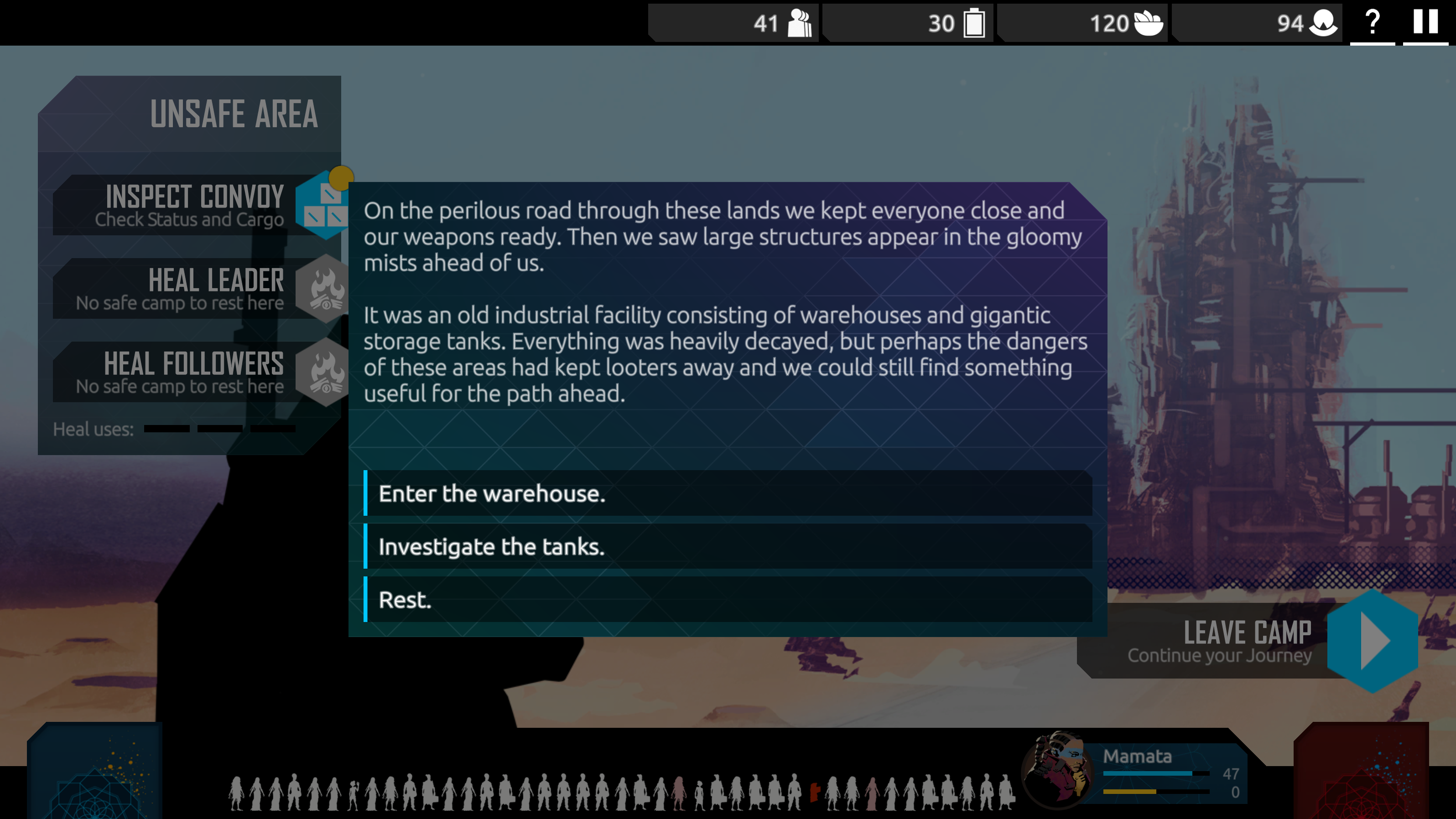 Fortunately, you can heal your wounded convoy (plus any new recruits you pick up) at any of the campsites you find along the way. The aim, though, is to keep your deck feeling fresh and open as you move through the game. No More Robots told me at PAX that Sharkbomb don't want there to be one killer combo deck in Nowhere Prophet, and you'll need to adapt which cards you take into battle as you move through different areas and cross paths with their many rival factions.

In just over an hour, my band of warrior monks, hermits and shamanic crusaders had dealt with everything from lowly bandit thugs and mutated parrots to grenade-chucking scouts, four-eyed bears and hi-tech sentry turrets. I'd accrued my fair share of casualties by the end of it, too, and while I was lucky enough to never find myself in a position where I had to put wounded cards back into battle (which would nuke them completely if they were defeated a second time), I can easily foresee there being some devastating losses down the line as you start getting attached to your favourite warriors - who you can also name if you're feeling particularly brave and sturdy of heart.

You don't necessarily have to deal with everything on the field before you go after the big cheese, either. Similar to Hearthstone, you can start attacking the enemy leader right from the off. Defeat them and you'll win the battle. However, some of the sophisticated head honchos you encounter will need their armour chipping off first before you can go for the jugular, so you'll need to balance your attacks between lowering their defences and keeping their other accompanying units in check. 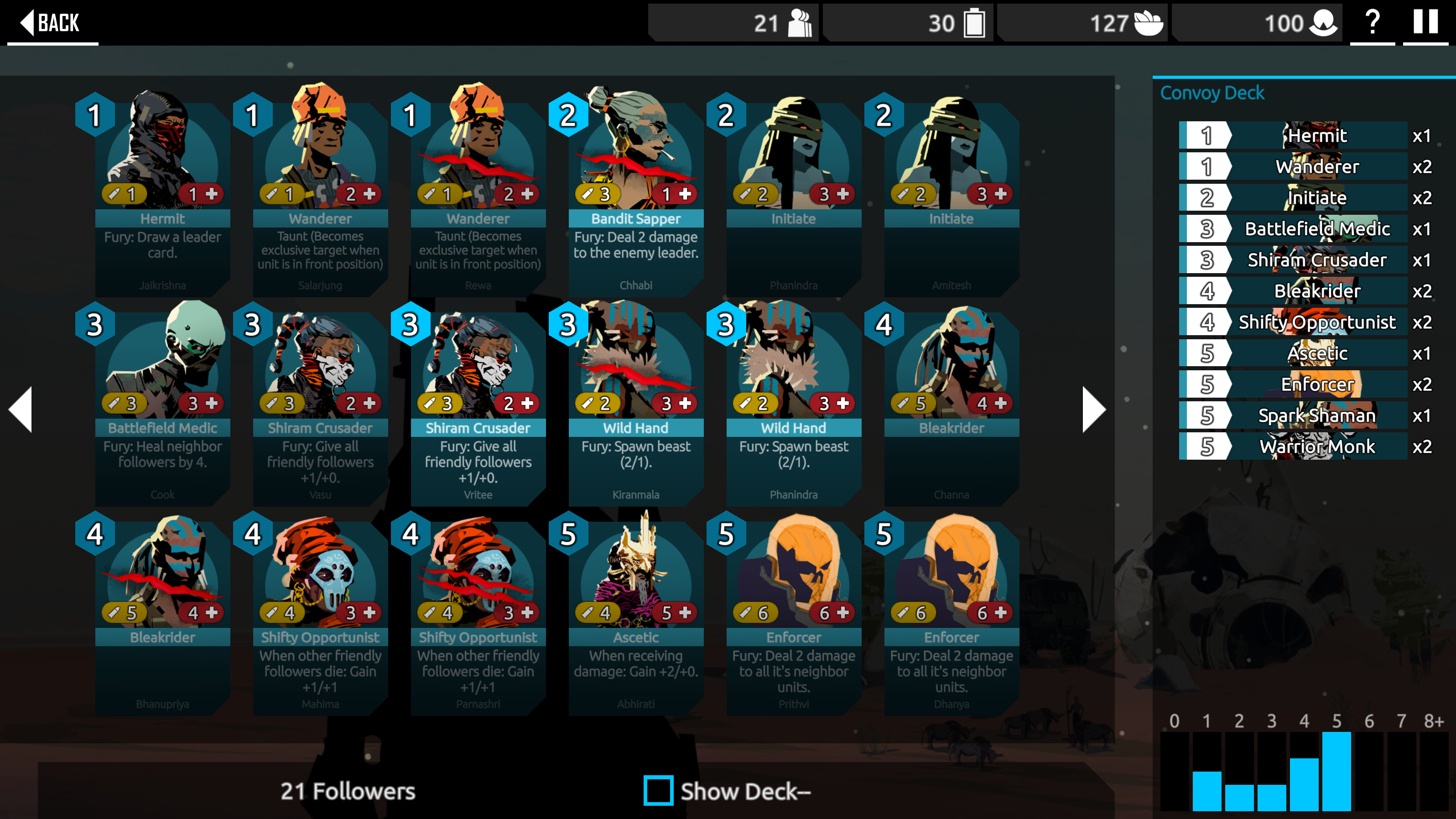 Nowhere Prophet also does an excellent job of informing you about what each card can actually do, too - which is welcome news for a card game novice such as myself. Simply hover your mouse over any given unit, and their abilities appear in plain, easy to grasp snippets, giving you everything you need to feel like you have full control over the tide of battle.

Combat isn't the only area where you'll need to keep a wide and varied deck to hand, though, as certain character cards can also unlock extra story events based on their special skill sets. In my demo, one of my blokes was a dab hand at picking locks, for example, which enabled me to break through a door in an abandoned mineshaft to score some extra treasures that I could then sell for some extra batteries (your main bartering currency) or trade for some much-needed food supplies the next time I reached a market. 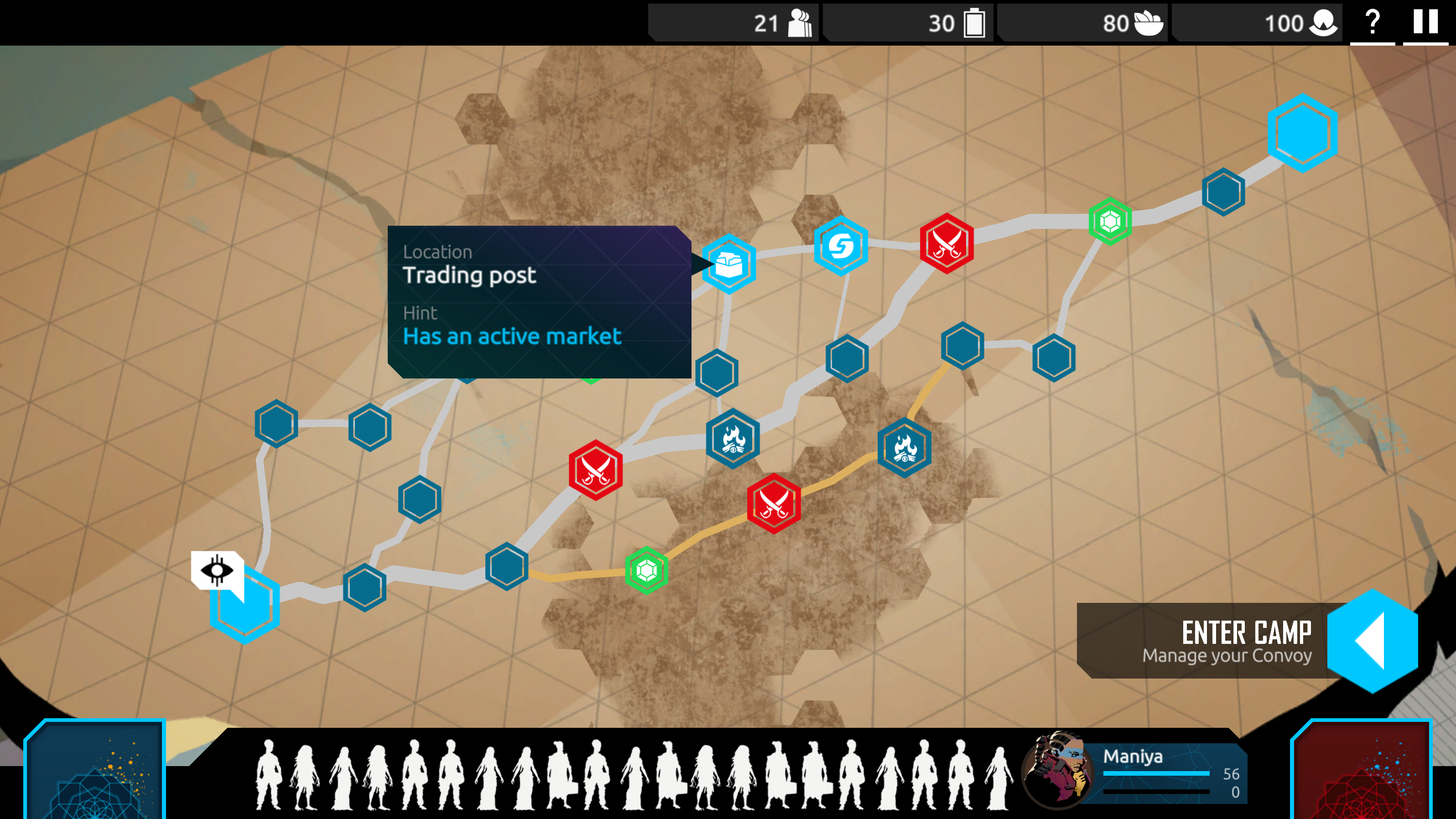 The most important currency in Nowhere Prophet, though, is hope. If your caravan loses faith in you, it's game over, which makes sense given you're meant to be 'the chosen one' leading your caravan to safety and everything, but it also reinforces the bond you have with these people and gives you a reason to be invested in their wellbeing - especially when they can turn on you in an instant if you start taking them for granted.

For instance, after having plied them with hope-filling gifts of tea and nice clothes at a marketplace not far off from the next main checkpoint on our journey, I decided we had enough food and hope (both of which gradually decrease as you journey between different nodes on the map) to go and quickly investigate some of the other encounters I'd missed just behind us.

There was a library I wanted to check out, you see, but because we were now travelling away from where we'd come from, my caravan's hope levels start falling much faster than I'd anticipated. They could see the end was in sight, but I was being a bad leader and leading them back out into the wilderness - something they clearly weren't best pleased about. It was worth it in the end, as I managed to find out some more information about the wider world and what caused the so-called 'Crash' many years beforehand, but it came at quite the cost.

And that's what stuck with me the most after my time with Nowhere Prophet came to an end. The card battles were brilliant, the world fascinating, but it was the way my convoy reacted to each of my decisions that really sold it for me. This wasn't a flock of sheep I'd been put in charge of; it was a living mass of people who each had their own flaws and quirks to help them get by, and the sense of responsibility I ended up feeling towards them far outweighed anything I'd previously experienced in other leadership-type roles such as in Frostpunk and This War of Mine. And the really lovely thing about Nowhere Prophet is that, unlike those two grim survival games I've just mentioned, it's so damn hopeful. Far from being a bleak tale of scrounging through the desert with limited resources and a wagon full of weaklings, there's so much life and colour to be found here, and I absolutely can't wait to pick up its rich, vibrant trail again when it launches later this summer.

If you can't wait that long, there's a public beta taking place next month that you can sign up for.