If you click on a link and make a purchase we may receive a small commission. Read our editorial policy.
Developer: Sharkbomb Studios
Publisher: No More Robots
Release: Out now
On: Windows, Mac, Linux
From: Steam,
Price: TBC

I'm a sucker for the future. Give me nanites, lasers, mechs, robots. Then blow them all up. Go further. Tell me stories about those that come after: the post apocalyptic survivors of a world built atop the ruins of the last. I'm a sucker for deckbuilders, too, especially when they're also roguelikes, particularly when they're brimming with clever ideas, and notably when those are woven into encounters that demand a choice between morality and material reward.

Nowhere Prophet should have left me exalted, but unfortunately it doesn't end up going anywhere.

You're off to find a crypt, because a robot told you to. Between you and supposed salvation are bandits, slavers, rebels and rogue machines. A successful run isn't just about defeating them, though. It's about managing your convey of new followers, feeding both their bodies and their spirits, and making decisions that won't wind up with your caravan in a smoking roadside heap. You're supposed to teeter on the brink of destruction, to panic as starvation or murderers close in. I didn't, though. I waltzed to victory on my very first run.

Maybe I got lucky, and a few early game finds set me up for an unusually unchallenging sprint through the wasteland. I'm sure luck played its part, but I'm also sure I owe much of my success to atrocious enemy AI. Time after time, my robo-ponents would spare my vulnerable scary units, completely waste their cards, and spend their go pointlessly demolishing rocks on their side of the board. 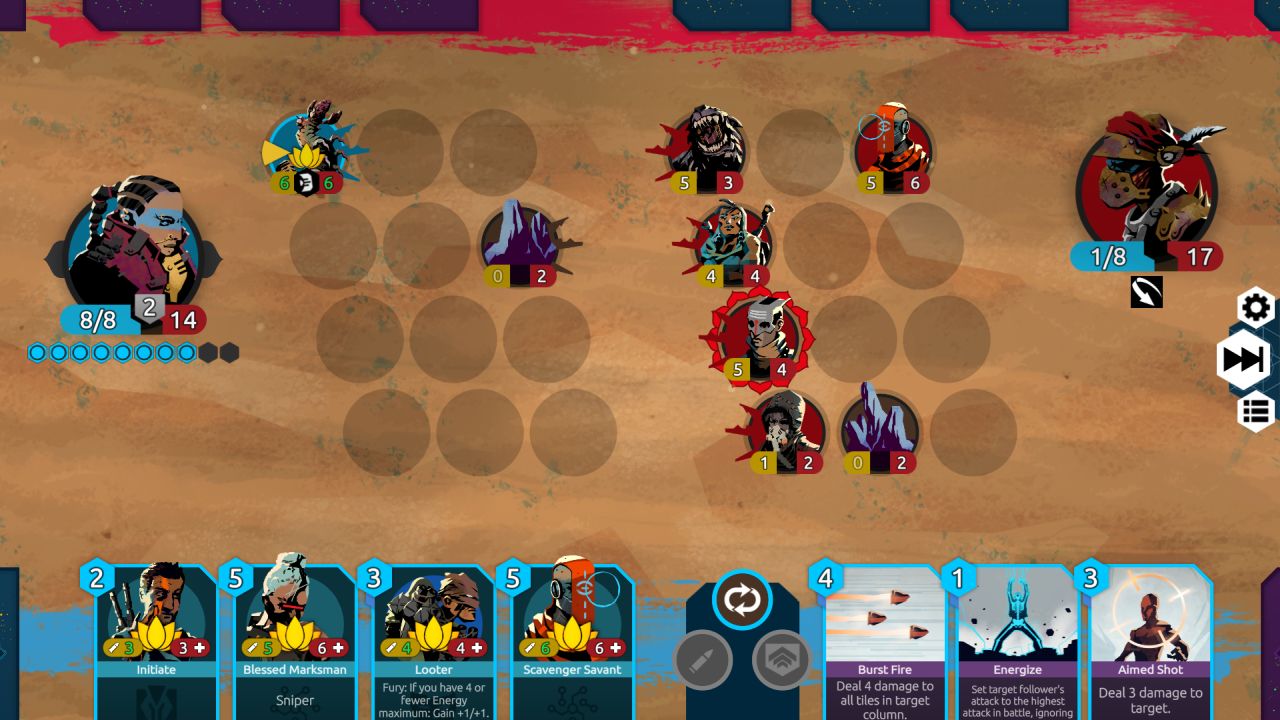 When you're not picking your way across the wilderness, exploring or trading or talking your way out of (or into) scrapes, you're fighting. Every member of your caravan is a card that can be played in combat, though you'll want to prune your actual deck down to the best of them. Most have abilities, largely familiar if you've played a card game before. Here's a robot that absorbs the first instance of damage. There's one that buffs every other robot when it dies. It's a varied pool, but only a few abilities stood out to me as genuinely new.

The board, though. I like the board. Each fight is littered with obstacles: restrictions and opportunities that might mix up your approach. Only the first unit in each row can attack and be attacked, so a beefy rock in a front line slot might need destroying before an enemy unit - presuming you don't want to be sneaky. The most interesting abilities play with that space. Robust units always survive if the spot behind them is free, while snipers can attack from anywhere. Throw in cards that mess with unit positions, and you've got a recipe for rich tactical consideration.

I'd often find myself delving down that thought well, chaining convoluted plans together. "If I first attack with my flimsy Pariah", I'd think, "then I can whack down a tanky enemy in front of them - but not before I play that unit that buffs everything nearby, and not before I target that explosive barrel next to those enemies." Then my opponent would spend its turn prodding at yet another rock, and I'd think "Oh. I guess I didn't need to do any of that." 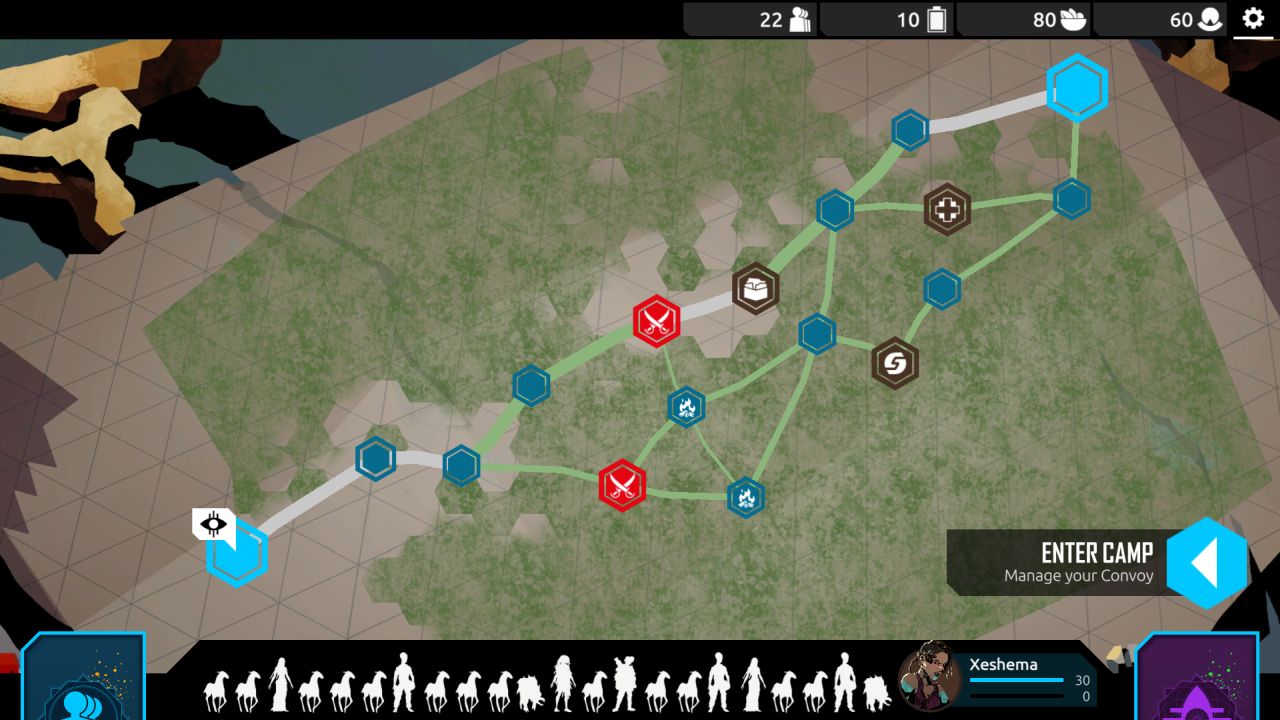 I'm halfway through a new run on hard mode. Those considerations matter more, now, but the back-and-forth is still tarred by an AI that can't tell its arse from its silicon elbow. I've built around the card "Tireless", after spending a hefty hum recruiting a fellow from a backwater market town. He's called Smack, and he refreshes every time I play a card. If I play my cards right, that means I can use him to attack half a dozen times in a turn. Except, ironically enough, he also has "Strain" - which means his maximum health goes down every time his ability triggers. He's integral to every fight, but I need to be careful.

Card permadeath might be Nowhere Prophet's best idea. The first time a unit falls in battle, they get wounded. You can still chuck them straight into the next fray, and they'll even be cheaper. They'll have less health, though, and if they die again they're lost forever. It's a promising system that would, again, work so much better if the threat was more threatening. I've never felt pushed to play recklessly with a valuable card. They're often good enough to end a fight before it's properly started. 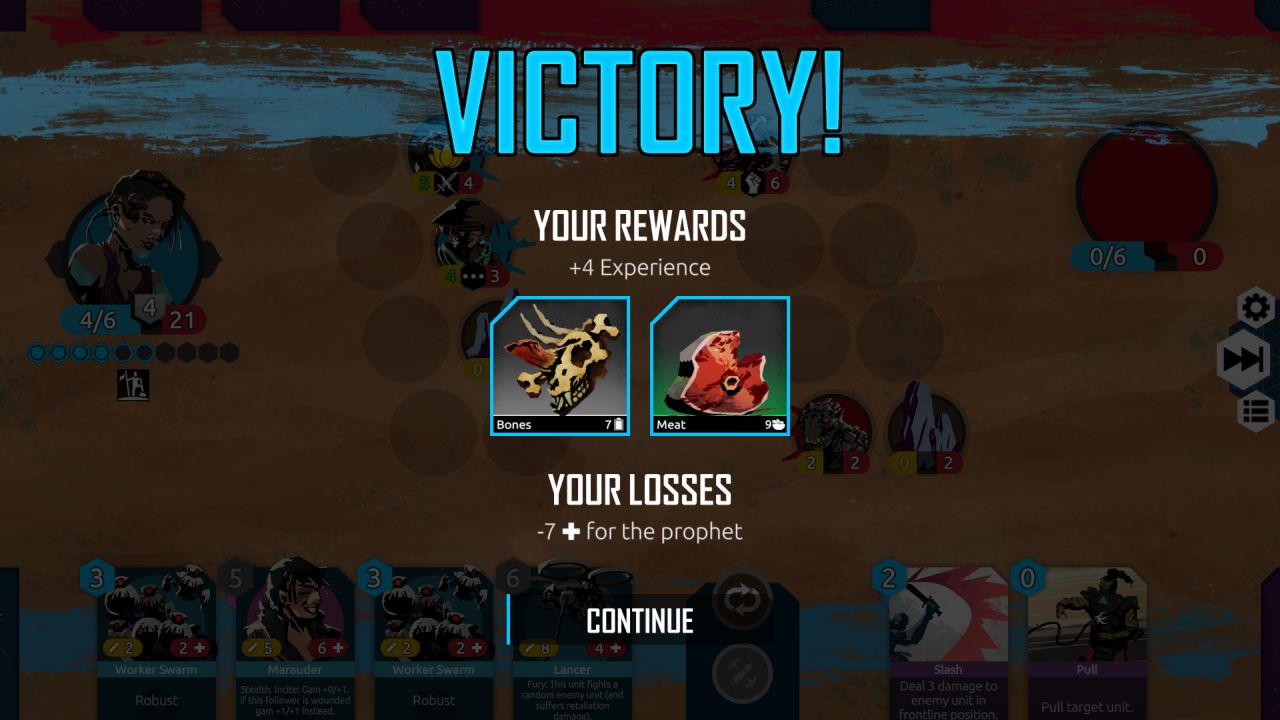 I wish I could tell you that the combat's failings don't ultimately matter. That Nowhere Prophet is still worth exploring for its world and its storytelling, for arresting snippets of interactive sci-fi anthologies. It has its moments. I remember choosing to pay a toll in food rather than tussle with some mercenaries, then my caravan shuffling past unexpectedly grateful soldiers. They smiled and thanked us. We'd saved them from starvation.

It’s not enough. The writing varies from competent to clumsy, but it never stirs. I never bought into the fantasy, as much as I tried and wanted to. It's all a bit too muddy. Too many old ideas dressed up in slightly weirder clothes.

Nowhere Prophet's ideas fill the game like a balloon, rising towards greatness - a balloon that gets punctured by lacklustre writing and wonky AI. It reaches for The Banner Saga's intimacy and Duelyst's intricacy, but winds up falling shy of both. Like most prophets, Nowhere is a false one.